The men from Johannesburg were up first and cruised to a big lead before their opponents, Italian club Zebre, launched a second-half comeback, but the Emirates Lions had enough points in the bank to get the win (38-26), with Rabz Maxwane scoring two of their five tries.

Saturday’s three matches involving the DHL Stormers, Vodacom Bulls and Cell C Sharks were tough for the South Africans though.

The Capetonians appeared to be in control against Benetton, but a late flurry by the Italian side – winners of the Rainbow Cup earlier this year – saw the DHL Stormers leave Treviso with only a losing bonus point (22-18). 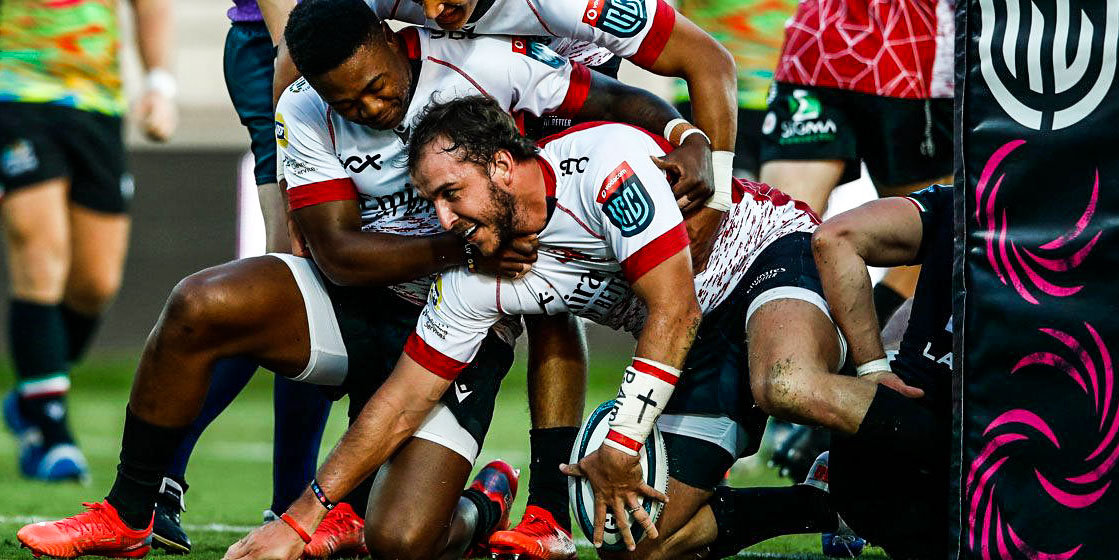 Burger Odendaal goes over for the Emirates Lions against Zebre.

The Vodacom Bulls and Cell C Sharks were up against Leinster and Munster, and experienced first-hand how tough these Irish giants are, conceding 10 tries between them.

The men from Pretoria conceded four tries and failed to score in Dublin (31-3), while the KwaZulu-Natalians were punished in Dublin (42-17).

Leinster and Munster top the log after the first rounds of action, with the Emirates Lions in third place – all of them as well as Cardiff, Ulster and Edinburgh – on five points. The DHL Stormers are 10th, with one log points, while the Cell C Sharks (15th) and Vodacom Bulls (16th) prop up the standings.

Next weekend, the Vodacom Bulls travel east to Galway where they face Connacht on Friday night, while the Emirates Lions are in action at the same time against the Scarlets in Llanelli in Wales.

Emirates Lions out of the blocks in style

The men from Johannesburg were out of the blocks at 100km/h at the Stadio Sergio Lanfranchi and scored five first half tries to take a 35-0 lead into the break, but Zebre didn’t give up and carded three five-pointers and a penalty try in the second half.

The Emirates Lions’ pace at the back set the tone in the first half as Jamba Ulengo rounded off a slick team move by collecting a wonderful pass from flyhalf Jordan Hendrikse to score the historic first try of the new Vodacom URC in the 11th minute, before Burger Odendaal crossed under the posts five minutes later.

Benetton scored 15 unanswered points in the final quarter to win their Vodacom United Rugby Championship season opener against the DHL Stormers by 22-18 in Treviso on Saturday afternoon.

The Capetonians, who started the match in brilliant fashion when Rikus Pretorius scored their first try in the first minute, would have left the Stadio Comunale di Monigo wondering where things went wrong for them.

The Italians dominated possession (69%) and had a massive territorial advantage (74%) and had the DHL Stormers under pressure, especially in the latter stages of the second half, while the South African team also committed too many silly errors, which handed the ball back to their opponents.

Irish powerhouse Leinster gave the Vodacom Bulls a proper welcome to Northern Hemisphere rugby when they won their Vodacom United Rugby Championship opener convincingly by 31-3 at the Aviva Stadium in Dublin on Saturday.

The men from Pretoria were probably better than the three points they scored during the game, but unforced mistakes, handling errors, a misfiring lineout and defensive lapses cost them dearly against the most successful side in the history of the competition.

The Irishmen were classy on defence and deservedly scored four tries for a bonus point – two tries in either half of the match. But 16 missed tackles by the Vodacom Bulls and 18 defenders beaten by Leinster tell a story of its own.

Apart from two tries in the second half –by Boeta Chamberlain (flyhalf) and Yaw Penxe (wing) – it was a tough baptism for the Cell C Sharks against one of the best teams in the competition.

The KwaZulu-Natalians defended very well, with a tackle success rate of 93%, but their discipline let them down as they conceded 17 penalties to the seven of Munster.

And to add to their woes, Springbok prop Thomas du Toit – who had a short stint with Munster a few seasons ago – was yellow carded just before the half-hour mark for repeated infringements.

Catch the action from the sixth round of the Women's Premier Division live here - matches are scheduled for Friday and S...

Delight for dynamic midfielders who dared to dream...

With three rounds remaining and the top two positions on the Carling Currie Cup log a two-horse race between the Vodacom...

It will be a crucial round of Women’s Premier Division action this weekend where results on Friday and Saturday could ha...

Emirates Lions flyhalf Jordan Hendrikse is just 20 years old, but already he has experienced more as a player than many ...

The Springboks put in a massive performance in their Castle Lager Rugby Championship Test against New Zealand in Townsville, but a 78th minute penalty goal by Jordie Barrett – his fourth of the match – saw the All Blacks snatch a 19-17 victory.

Benetton scored 15 unanswered points in the final quarter to win their Vodacom United Rugby Championship season opener against the DHL Stormers by 22-18 in Treviso on Saturday.

Irish powerhouse Leinster gave the Vodacom Bulls a proper welcome to Northern Hemisphere rugby when they won their Vodacom United Rugby Championship opener convincingly by 31-3 at the Aviva Stadium in Dublin on Saturday.

A second tournament victory on the bounce for the Blitzboks in Canada, this time in Edmonton.