On Sunday, FNB CUT Ixias and FNB UP-Tuks emerged victorious in the first two matches of the new-look competition.

Action will resume on Thursday, 8 April with five matches across two venues.

A summary of the five matches played in the the opening round:

The Madibaz showed good enterprise and commitment in their return to the Varsity Cup competition and scored four well-worked tries in a competitive showing against the Eagles, but they could not sustain their effort and conceded a number of late tries.

The Eagles started slowly, but once they got into their stride in the second half, scored 28 points to ease into victory. Eagles hooker Gustav du Rand scored twice in the match, earning him the FNB Player That Rocks gong.

The Shimlas failed with two late penalty goal attempts and had a try disallowed in the frantic last five minutes of this highly entertaining match, which delivered the first draw of the competition.

Credit to the UFS side, who saw their second half comeback instigated by replacement centre JP Duvenhage, but the UWC side, under guidance of new coach, Paul Treu, clearly came out to play and led handsomely at the break.

They scored some eye-catching tries, with FNB Player That Rocks winner Gilroy Lee Philander a constant threat on the attack. He finished off two seven point tries, scored in quick succession and the dangers of the Cape backline was there for all to see.

In the last 20 minutes, the Bloem boys came back strongly, scoring two tries, but two potential match-winning kicks in the last minutes of the match went astray. 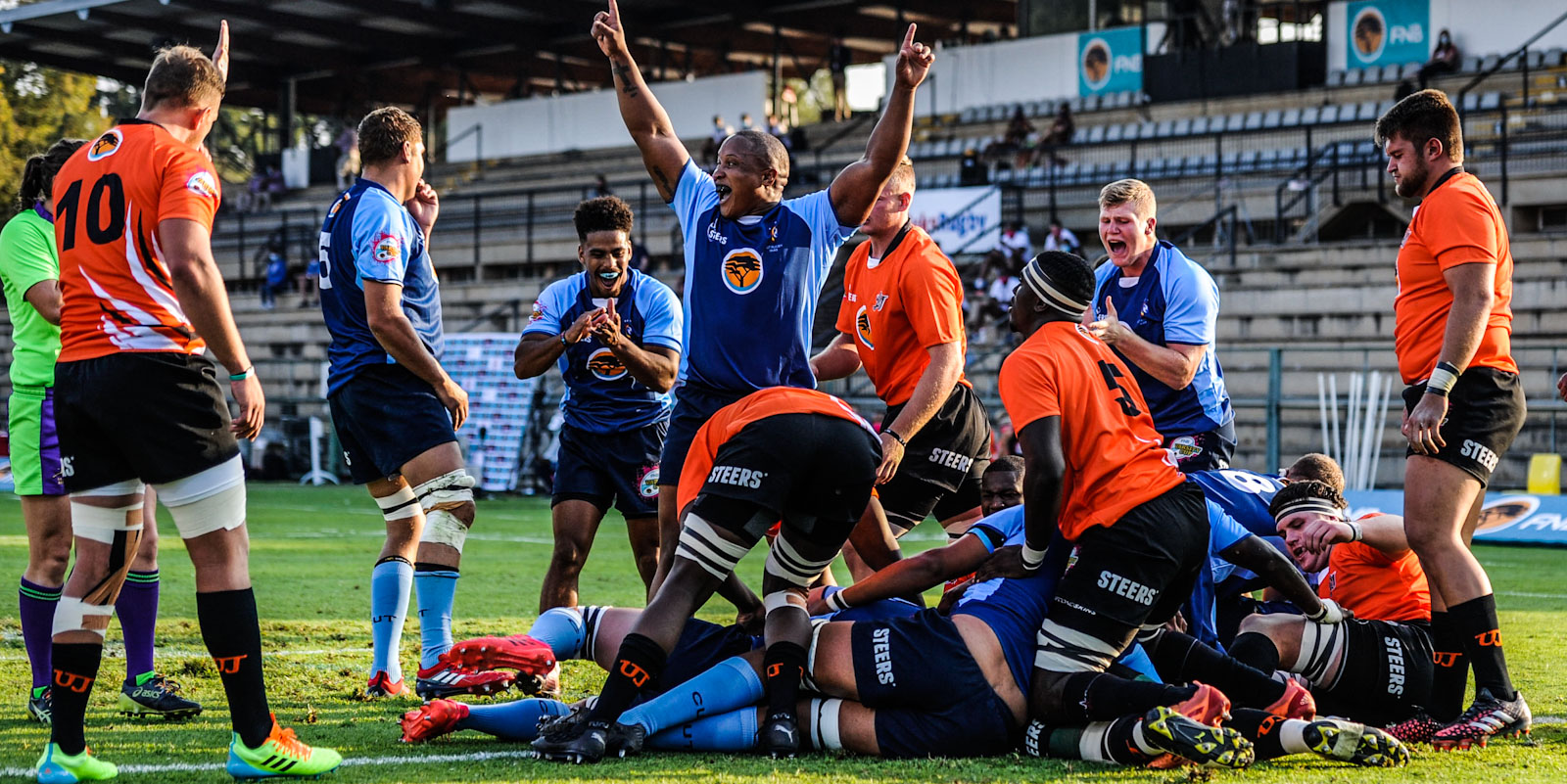 CUT celebrate as Johannes Terblanche goes over for the first try of the match against UJ.

FNB UCT Ikeys claimed their first win against their arch-rivals in six matches and ended FNB Maties’ 25-match winning streak in the competition.

In a game plagued by more yellow cards than tries, flyhalf James Tedder got FNB UCT Ikeys off to an emphatic start when his cross-kick was chased down by scrumhalf-turned-wing Liam Kloosman, who scored in the corner.

Tedder had a strong overall game, which earned him the FNB Player That Rocks award, but did not pack his kicking boots for this encounter, allowing Maties to stay in the game till the very last move of the match.

In the end, five yellow cards were dished out, with UCT at one stage playing with only 13 men, but still managed to hold Maties at bay despite that disadvantage.

FNB CUT Ixias made an early statement with a six-try, bonus-point win over the Johannesburg side, romping away in the second half of the match.

It was set up by the FNB CUT pack, who dominated the FNB UJ scrum throughout. As a result, Ixias tighthead prop Janu Botha won the FNB Player That Rocks award.

The Bloemfontein university’s first four tries were all scored by forwards, but fullback Cohen Jasper will also be delighted with his brace, ghosting past defenders on the counterattack.

After losing all five of their matches in last year’s FNB Varsity Cup, FNB UJ were hoping to make a winning start to the 2021 tournament, but more work awaits coach Dewey Swartbooi before that will be possible.

FNB UP-Tuks switched gears in the second half to record a bonus-point win against FNB Wits. The home side were shocked onto their heels in the opening stanza though with two quick tries by hooker Morné Brandon as the blue machine used their powerful forwards to dominate.

FNB UP-Tuks fullback Alex-Zander du Plessis kept his charges within a shout of the opposition as he landed five penalties and that display earned him the FNB Player that Rocks award.

Tuks returned the favour in the second half as they maintained possession while playing in the right areas and their efforts were rewarded handsomely. They scored four tries, while Du Plessis kept his perfect record, ending with ten out of ten successful kicks.