The Junior Springboks outplayed France by 42-27 in Verona on Tuesday evening to finish top in Pool A and stay unbeaten at the Six Nations U20 Summer Series currently staged in Italy.

The SA U20s held a 17-12 half time lead through two converted tries and a penalty goal, while France replied with two tries and a conversion.

The scorching heat did not prevent the two sides to turn on the style in the second half, during which time the South Africans increased their dominance by adding three more tries to cap a richly deserved victory over a very good Under 20 French side.

As a result of their well-deserving triumph, the Junior Boks top Pool A win 15 points from three bonus point wins.

That means that Bafana Nhleko’s unbeaten team now await the outcome of tomorrow’s Pool B decider between hosts Italy and Wales to see who they will play in next week’s playoff spot for the overall Summer Series winner.

Junior Bok skipper and flyhalf, Sacha Mngomezulu, had an outstanding game with his ball distribution and kicking boot. He delivered a flawless kicking display by succeeding with four conversions and three penalty goals for a personal contribution of 17 points. 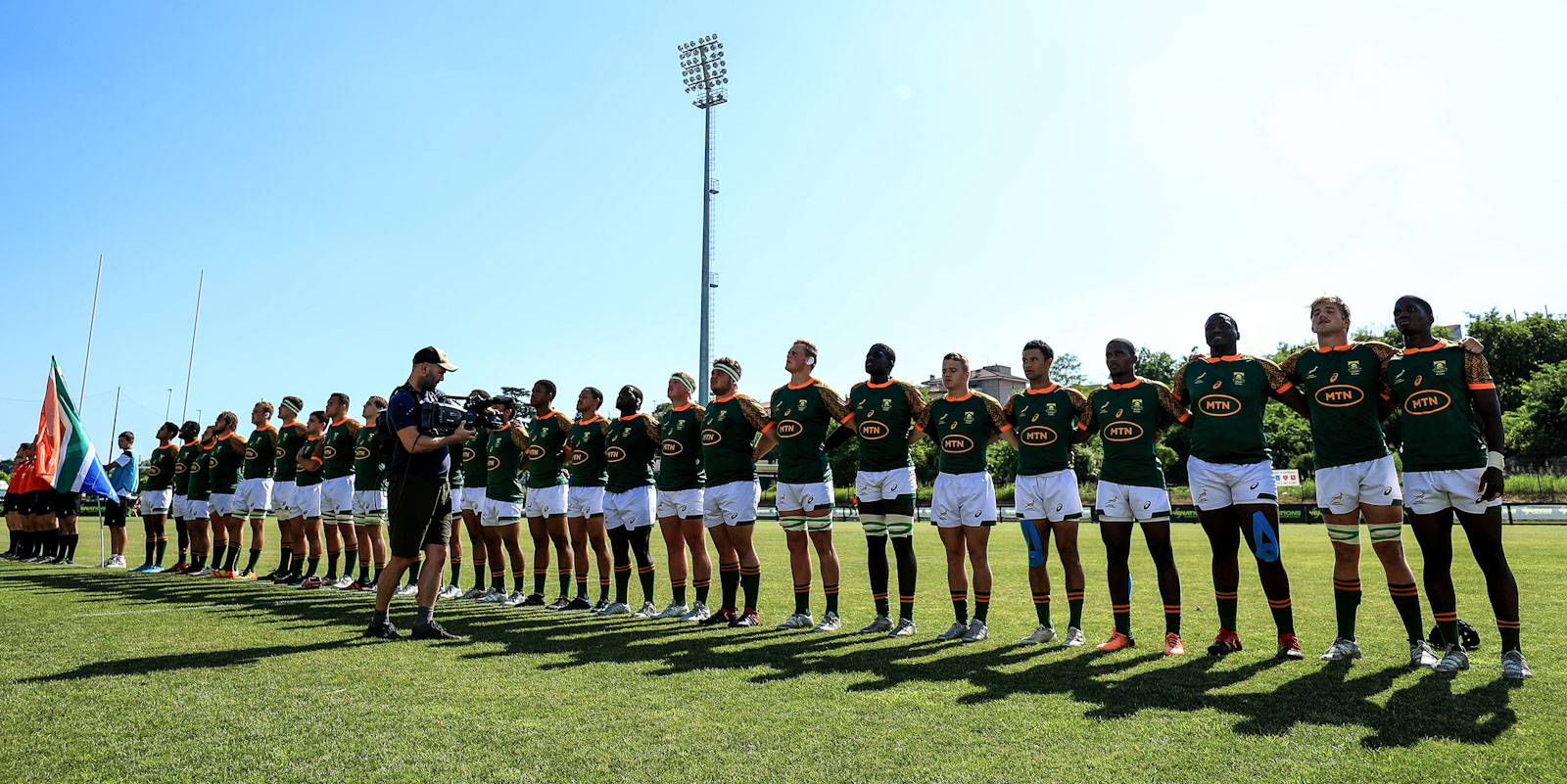 United and unbeaten in Italy.

The only blemish in a very good South African display was the yellow card for front-ranker Juann Else, while influential No 8 Cameron Hanekom had to leave the field early because of an injury, with Louw Nel taking over his duties at the back of the scrum.

The French played some enterprising rugby, but they were made to work hard to keep the South Africans at bay, who used their set piece and kicking game to good effect.

Nhleko said afterwards he was especially pleased with his side’s second half display.

“I felt we made it hard for ourselves in the first half because we didn’t take our opportunities and didn’t manage the game on our terms – that took energy away from us,” said the Junior Bok coach.

“Once we stuck to our processes I though the boys did well, and there were character and composure in the second half.”

Regarding another winning display against a quality opponent, Nhleko added: “We need to grow in our game management. I would also like to thank our strength and conditioning and medical departments for their work because the conditions (the heat and humidity) are tough, but our players were able to come through very well.

“The bodies are sore after three weeks so we will give them two days off to recover and then we will regroup to make sure our detail is there and that we are up for next physical challenge,” said Nhleko.

SA to host next two World Rugby U20 Champs...

South Africa will host the next two editions of the World Rugby U20 Championship, in 2023 and 2024, the global governing...

The Junior Springboks side to face France in their vital U20 Six Nations Summer Series clash in Verona on Tuesday has undergone several changes, which include a couple of positional switches.

Craven Week back with a bang

The return to the SA Rugby rugby calendar of their flagship schools tournament, the Under-18 Craven Week, was celebrated with a barrage of tackles, sidesteps, counter-attacks and ultimately, tries at Rondebosch in Cape Town on Monday, with four matches celebrating the resumption of the tournament in 2022 after a two year absence.

Junior Springbok assistant coach Chean Roux heaped praise on the SA U20s after their 42-27 victory over France put them one game away from achieving their goal of recording an unbeaten Under-20 Six Nations Summer Series.

Hugely competitive day confirms Craven Week is back to thrill

A highly competitive third day of the SA Rugby Under-18 Craven Week once again confirmed why this flagship schoolboy tournament is such a popular event amongst all stakeholders – and how much it was missed in its two year COVID-enforced absence.