This year’s 12-match tournament will see two matches played in South Africa, five in Australia and five in New Zealand.

The Tests in South Africa will see Argentina play the Springboks twice before both teams head to Australia and New Zealand for the remainder of the tournament.

The match schedule has been amended to accommodate the ongoing effects of the pandemic, including continued international travel restrictions and government quarantine protocols that exist within the member union territories.

It was hoped that the 2021 Castle Lager Rugby Championship, as announced last year, would comprise the four national teams playing each other on a home or away basis through a new mini-tour match schedule.

However, the pandemic makes this impossible at present and as a result, the 12-match tournament will be played in South Africa, Australia and New Zealand, with the Springboks making their return to the competition after missing out in 2020, when all the matches were hosted in Australia.

According to the 2021 schedule, the Springboks open their campaign against Argentina on Saturday 14 August, a week after the conclusion of the Castle Lager Lions Series, before the second Test against the Pumas on 21 August, before travelling to Australia. 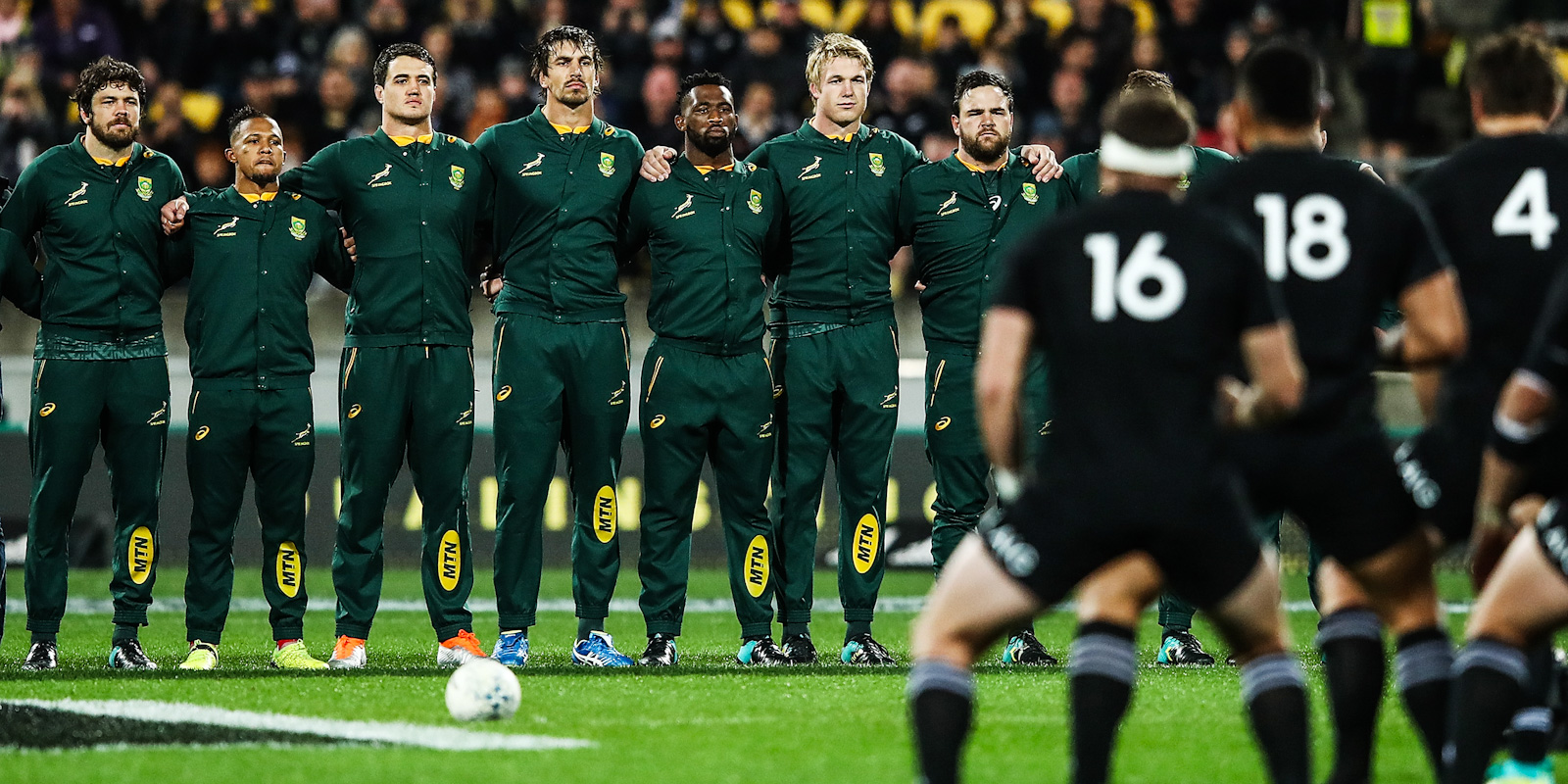 The Boks will face the All Blacks on two consecutive weekends in New Zealand.

According to the 2021 schedule, the Springboks open their campaign against Argentina on Saturday 14 August, a week after the conclusion of the Castle Lager Lions Series, before the second Test against the Pumas on 21 August, before travelling to Australia.

Next on the fixture list are the Wallabies, on 11 and 18 September, before the Springboks conclude their commitments with two Tests against the All Blacks in New Zealand on consecutive weekends – 25 September and 2 October.

Rassie Erasmus, Director of Rugby, said in his reaction to the draw the Springboks are delighted at the prospects of resuming their rivalry with their southern hemisphere opponents.

“Following the unfortunate COVID-related disruptions of last year, we are very much looking forward to resume playing against the Pumas, Wallabies and the All Blacks,” said Erasmus.

“There is a great rivalry between us, but we also have a lot of respect for each other and have built good friendships over many years of southern hemisphere competition.

“Playing the All Blacks in their backyard is a massive challenge, Argentina showed their growing stature last year while the Wallabies are always tough opponents, especially on their home turf.” 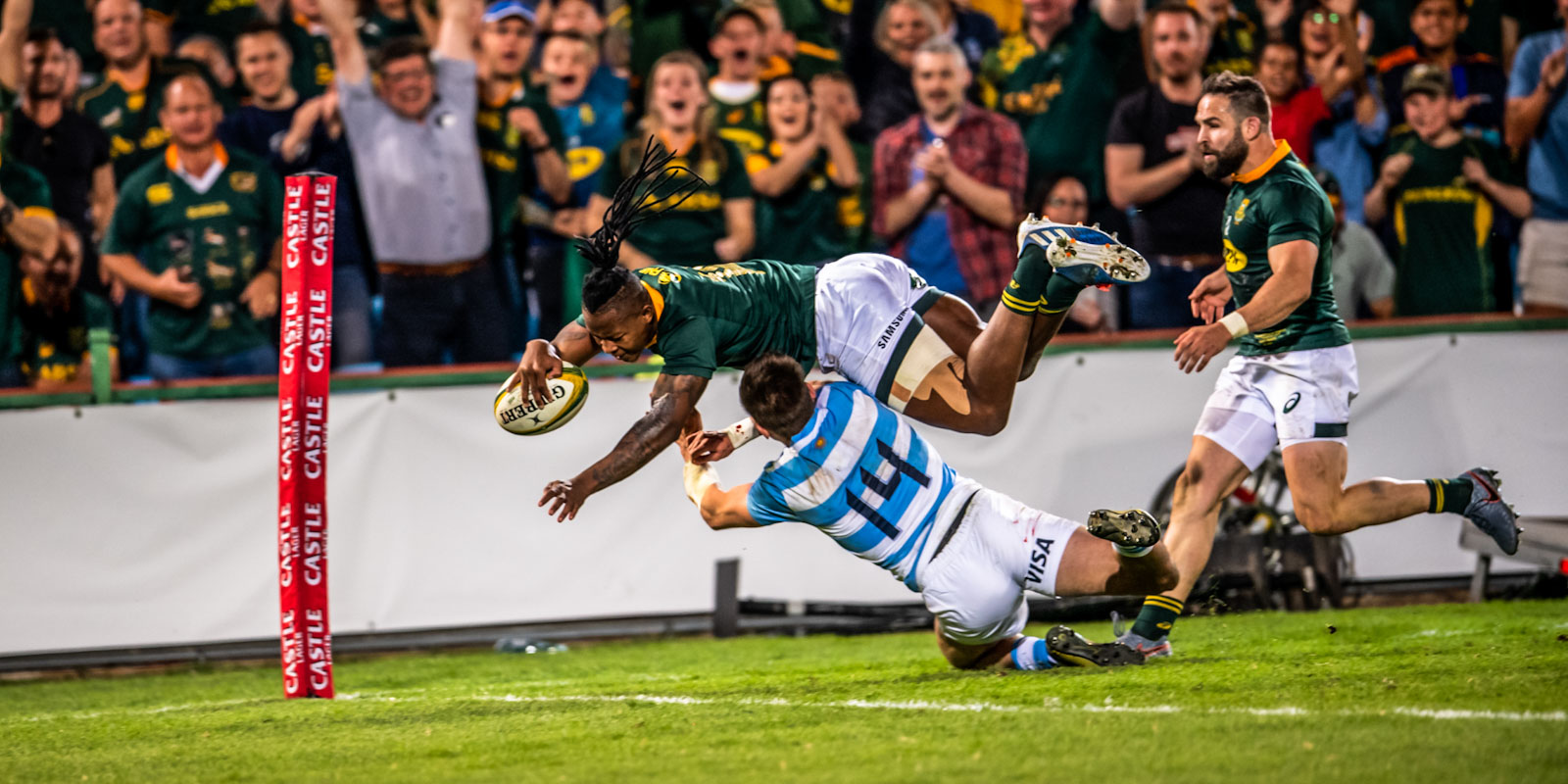 Sbu Nkosi goes over for one of his two tries against Argentina in 2019.

“The two Tests against Argentina take the number of Springbok home matches this year to seven, which makes it an exciting but challenging home programme for us,” said Nienaber.

“We are grateful to all involved, at SANZAAR and SA Rugby, for the hard work being done to make this all possible, keeping in mind all the current pandemic difficulties.”

SANZAAR CEO Brendan Morris explained the current competition format was agreed upon by members with the restrictions as a result of the pandemic in mind.

“We have worked tirelessly with the National Unions through the continued difficulties associated with the pandemic,” said Morris.

“This includes ongoing international border travel restrictions, quarantine protocols and player welfare concerns. Therefore, we have been unable to roll out the previously agreed mini-tour format as we simply cannot play matches in Argentina at present due to the impact of the pandemic.”

Morris added: “The exciting news is that we do welcome back South Africa to TRC after a difficult 2020 when the pandemic made it impossible for them to participate.

“The Springboks are the reigning World Champions and it will be fantastic for rugby fans to see them play once again in this prestigious tournament. As last year the Pumas will play all their matches away from home and we thank them once again for their understanding in this regard.”

All the match venues and kick-off times will be announced by the host nations in due course.

The Emirates Lions shocked log-leaders the Vodacom Bulls in a tightly contested PRO14 Rainbow Cup SA clash in Johannesburg on Saturday, winning their first game of the campaign by 34-33.

Replacement flyhalf Tim Swiel kicked a late penalty goal to hand the DHL Stormers a 25-22 win over the Cell Sharks in their fourth-round PRO14 Rainbow Cup SA match in Durban on Saturday afternoon.

Border Ladies and DHL Western Province continued to stamp their authority in the Women’s Premier Division on Saturday as they cruised to their third wins a row, while the Boland Dames registered their first victory of the season in an exciting third round.

Join us for live coverage of the Women's Premier Division match between Boland and the Blue Bulls, live from Boland Stadium in Wellington.

The Emirates Lions shocked log-leaders the Vodacom Bulls in a tightly contested PRO14 Rainbow Cup SA clash in Johannesburg on Saturday, winning their first game of the campaign by 34-33.