Depth of Springbok Sevens on display

The depth of the South African national Sevens squad was on full display at the Rugby Africa Solidarity Sevens Camp at the Markötter Stadium in Stellenbosch on Friday, with both local sides in the tournament delivering strong performances.

The SA 1 side, coached by Springbok Sevens coach Neil Powell, proved almost unstoppable in their wins over Uganda (36-5) and Kenya (38-7), but were caught napping in their final match of the day against the SA 2 side, coached by SA Rugby Sevens Academy coach Sandile Ngcobo, whose side won 21-12 to hand their fellow squad members their first defeat of the day.

SA 2 came up short earlier against Kenya (19-12), but scored convincing wins over Uganda (28-7) and Zimbabwe (31-5). They left their best performance for last though, as they caught SA 1 cold to record an unexpected win.

It was a good day for Powell as both squads showed determined efforts.

“We did good and bad things,” said Powell. “I was a bit worried that both teams did not stick to the structures in that last game when they played each other. That was not what we were looking for from the match. We are two months away from the Olympics still, so I was not expecting perfect performances at all. But we still got some quality match time in today and that was very pleasing.

“I told the players that the implementation of our plans was the key for me to select them, and not everyone did that. We still have time to work on things, and tomorrow is another day,” Powell said. 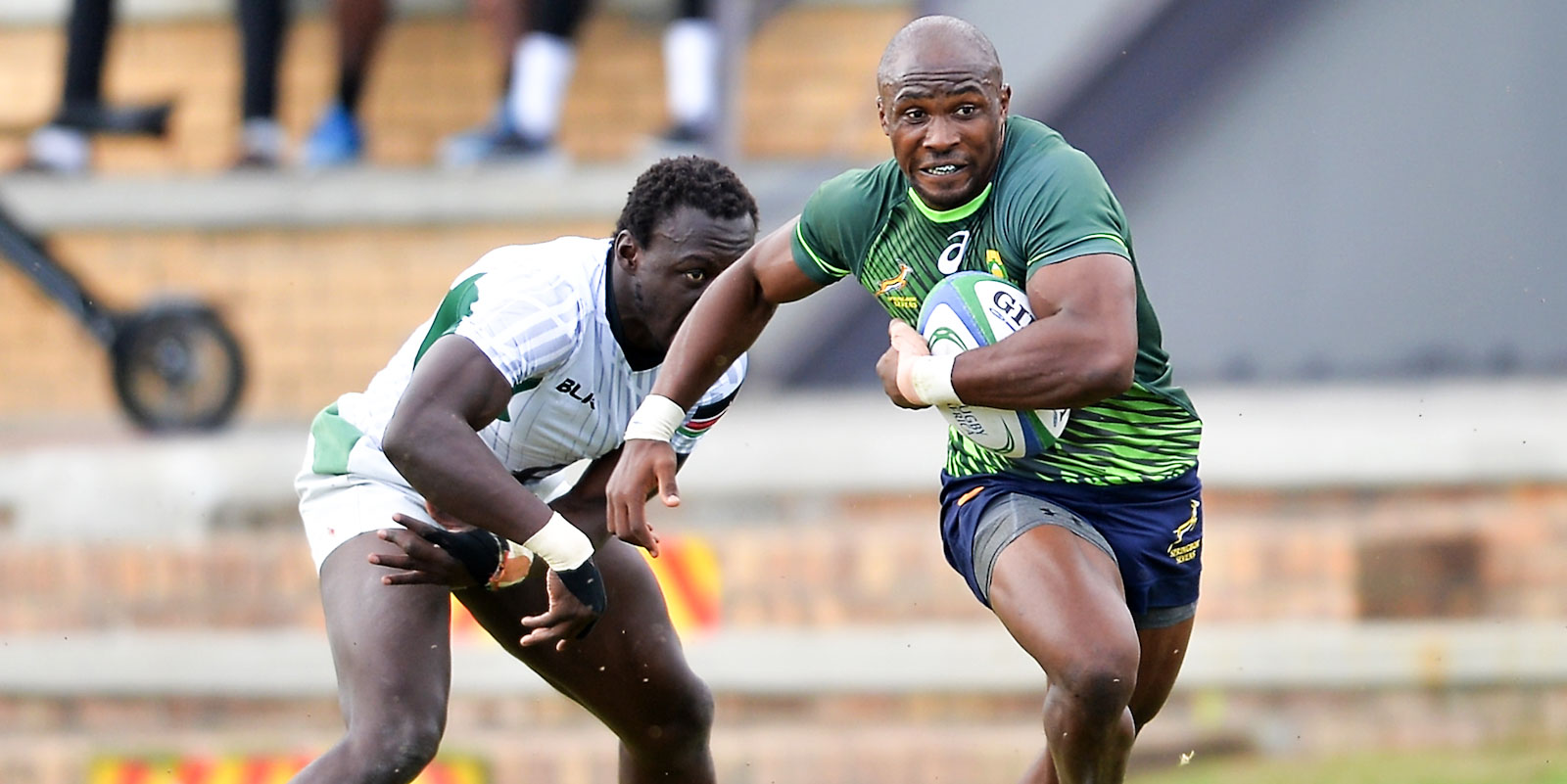 Siviwe Soyizwapi on the run.

SA 1 started their day with a strong 36-5 win over Uganda. A first half hat-trick by captain Siviwe Soyizwapi helped them along to a commanding 24-0 lead at the break. South Africa were dominant in all phases of play and scored two more tries in the second half, before Uganda broke their duck in the final minute.

The SA 1 side delivered a commanding performance against their HSBC World Rugby Sevens Series foes, Kenya. They managed to frustrate their opponents with strong defence and only conceded one try, while scoring six - three in each half.

Their patience on attack reaped good rewards for the SA side and their superior work at the breakdown resulted in a number of turnovers and tries from the counterattack.

The SA 2 team started the day with a 28-7 win over Uganda. Good defence by the SA side thwarted early possession dominance by Uganda and kept them scoreless in the first half. Two quickfire tries by Shilton van Wyk - each off good backline moves - eased his side into a 14-0 lead at the break.

The second half saw more of the same. The Ugandans were kept at bay due to some physical defence by the home side, who scored two more tries, one from a turn-over and one from a good backline move. Uganda were rewarded for their determination with a try in the last play of the match, but this was too little too late. 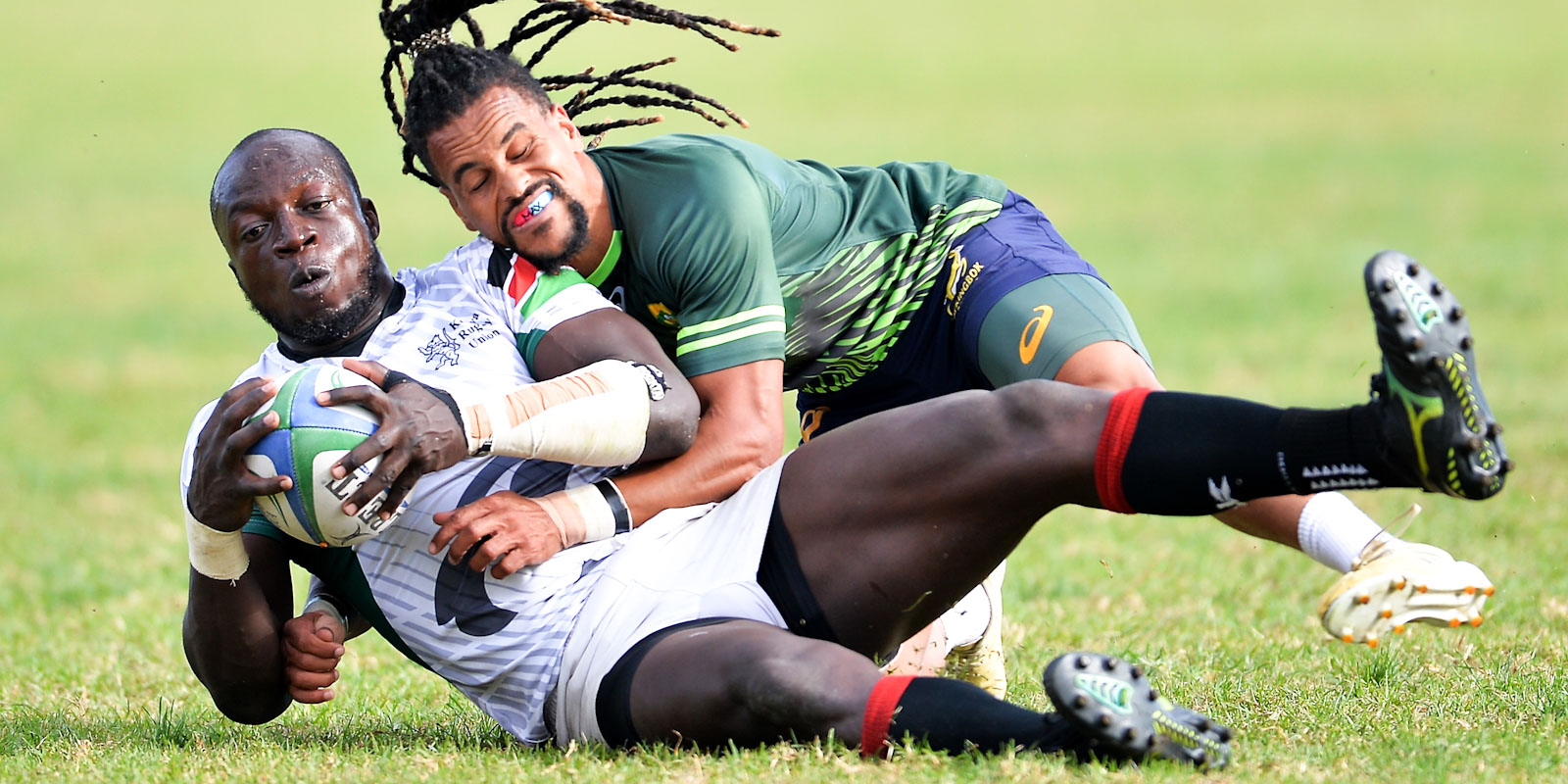 SA 2 held a 12-7 lead over Kenya in their second match, but could not match the East African side's second-half burst. Two late tries by Kenya saw them ease past the hosts, who missed vital tackles as the match ran out.

The SA 2 team were never in danger of losing to Zimbabwe, due to more direction on attack and a superb performance by Ronald Brown, who had a hand in most tries. Brown scored a try on each side of the halftime whistle too and made numerous good defensive reads as well.

Brown and Van Wyk also scored good tries against SA 1 in the final match of the day. The senior side made too many handling errors when they had scoring opportunities, with the SA 2 side doing the opposite. Both Van Wyk’s tries came off turnover ball, while Brown scored a fine individual effort.

The SA 1 side will face Zimbabwe on Saturday morning before a ranking of teams will determine the final four matches of the camp.

The Vodacom Bulls claimed top spot in the PRO14 Rainbow Cup SA in Durban on Saturday evening when they defeated the Cell...

The race for top spot in the PRO14 Rainbow Cup SA was comfortably won by the Vodacom Bulls on Saturday evening in Durban...

DHL Western Province reinforced their status as the favourites to clinch the Women’s Premier Division title this season ...

The women’s provincial season will switch into a new gear on Saturday as the Premier Division teams start the second hal...

The PRO14 Rainbow Cup SA match between the Emirates Lions and DHL Stormers, scheduled for Cape Town Stadium on Saturday,...

The Cell C Sharks team named to travel to Pretoria to take on the Vodacom Bulls on Saturday show just one change, with Jaden Hendrikse included at scrumhalf as the Durbanites continue to build momentum in the PRO14 Rainbow Cup SA competition.

The experienced Burger Odendaal will lead the Emirates Lions into battle in their third round PRO14 Rainbow Cup SA clash with the DHL Stormers in Johannesburg on Saturday, while Ivan van Rooyen (coach) also welcomes back Willem Alberts to his team.

Junior Springbok coach Bafana Nhleko was a pleased man on Thursday as the SA Rugby Academy squad stepped up their preparations with a series of chukkas against DHL Western Province in Stellenbosch.

Defending Women’s Premier Division champions, DHL Western Province, and the Border Ladies earned back-to-back wins in the competition in a gripping second round on Saturday, while the Cell C Sharks Women earned their first win of the season.

Catch the action live from Wolfson Stadium in Port Elizabeth, where the EP Queens host the Border Ladies in the second round of the Women's Premier Division.