A short history of the Heineken Champions Cup

With the Vodacom Bulls, Cell C Sharks and DHL Stormers setting their sights on Europe this week, let's look back at the rich history of the Heineken Champions Cup, which started more than two decades ago.

It began not surprisingly in modest circumstances with Stade Toulousain making the journey to play the Romanians of Farul Constanta in October 1995, and only the optimists who were on the shores of the Black Sea that day could have forecasted the trajectory of the fledgling competition. But nearly 30 years and close to 22 million spectators later, this most elite of club rugby tournaments has left an indelible mark on the global game.

In its various guises as the Heineken Cup, the European Rugby Cup, the Champions Cup and more recently, the Heineken Champions Cup, it has become synonymous with quality on and off the pitch, and going into this 28th season, 24 of the world’s leading professional clubs are ready to deliver yet another series of compelling matches to hundreds of thousands of fans across the continent and to TV audiences in over 150 countries.

Powerhouses of the club game such as Leicester Tigers, Saracens and Harlequins in England, Stade Toulousain, Stade Rochelais and Racing 92 in France, and Leinster, Munster and Ulster in Ireland, will be competing for glory once again, however, on this occasion, the DHL Stormers, the Vodacom Bulls and the Cell C Sharks will also be in the mix as the top South African clubs make a historic first appearance in the tournament.

Sponsored in that turbulent first 1995/96 season by current title partners, Heineken, while administrators wrestled with the challenges of professionalism, Stade Toulousain emerged as the inaugural winners when they edged out Cardiff after extra-time at the National Ground, Cardiff Arms Park.

Although Stade Toulousain would go on to pretty much dominate the European landscape over the following 15 years, it was arguably another French club which lit the tournament fuse in 1997. CA Brive were unheralded in the UK and Ireland as they prepared to face a strong Leicester side in the final, but the brilliant havoc they managed to wreak in Cardiff stunned even the most knowledgeable observers.

Leicester were simply dismantled by a combination of verve and pace provided by Sébastien Viars, Alain Penaud and Sébastien Carrat, as well as raw power provided by Brive’s Polish flanker, Gregori Kacala, in what was a landmark occasion for the developing competition.

Toulon won the Heineken Champions Cup in 2014, with a strong contingent of South Africans.

However, Leicester absorbed their French lesson and duly became the first club to win back-to-back titles in 2001 and 2002 with the magnificent, rollercoaster 34-30 final victory over Stade Francais Paris at the Parc des Princes in ‘01 regarded by the then organisers, ERC, and many observers, as one of the very best showpiece matches.

The Irish provinces had already begun to make an impact and Ulster’s David Humphreys – captain of the 1999-winning side – set an individual record during the 2001/02 season which still stands when he scored 37 points in a pool match against Wasps.

Meanwhile, Munster and their growing band of supporters, had famously pulled off one of the shock results of the early years when they outlasted Stade Toulousain in a dramatic semi-final in the heat of Bordeaux. They would eventually falter in the 2000 final won by Northampton Saints at Twickenham, but the target of European glory was now large in the Irish province’s crosshairs and deliverance would be at hand in 2006 and 2008.

As the tournament grew in stature, bonus points were introduced at the start of the 2003/04 season for the 24 clubs competing in six pools, and a talented Wasps side captained by Lawrence Dallaglio went on to lift the trophy.

Wasps, along with Stade Toulousain and Munster, invariably found themselves at the business end between 2005 and 2008, and then it was Leinster’s turn to finally make the breakthrough by claiming the silverware at BT Murrayfield in 2009. That season was illuminated by a magnificent occasion when 82,208 fans – a world record attendance for a club match at the time – packed into Dublin’s Croke Park for a semi-final between Leinster and Munster, and also by Leinster’s Rocky Elsom who produced an exceptional series of individual performances.

Stade Francais Paris and Harlequins set a tournament attendance record of 76,569 for a pool match when they met in the 2008/09 season at the Stade de France, and that was the venue in 2010 when appropriately enough, Stade Toulousain, claimed a fourth title.

To celebrate the first 15 years of the Heineken Cup, Munster’s Ronan O’Gara – still the top scorer in the history of the competition to this day with 1,365 points and Head Coach of the 2022 champions, Stade Rochelais – was presented with a special accolade as the best player during the period, and that spawned the prestigious EPCR Player of the Year award, the winner of which now also receives the Anthony Foley Memorial Trophy. 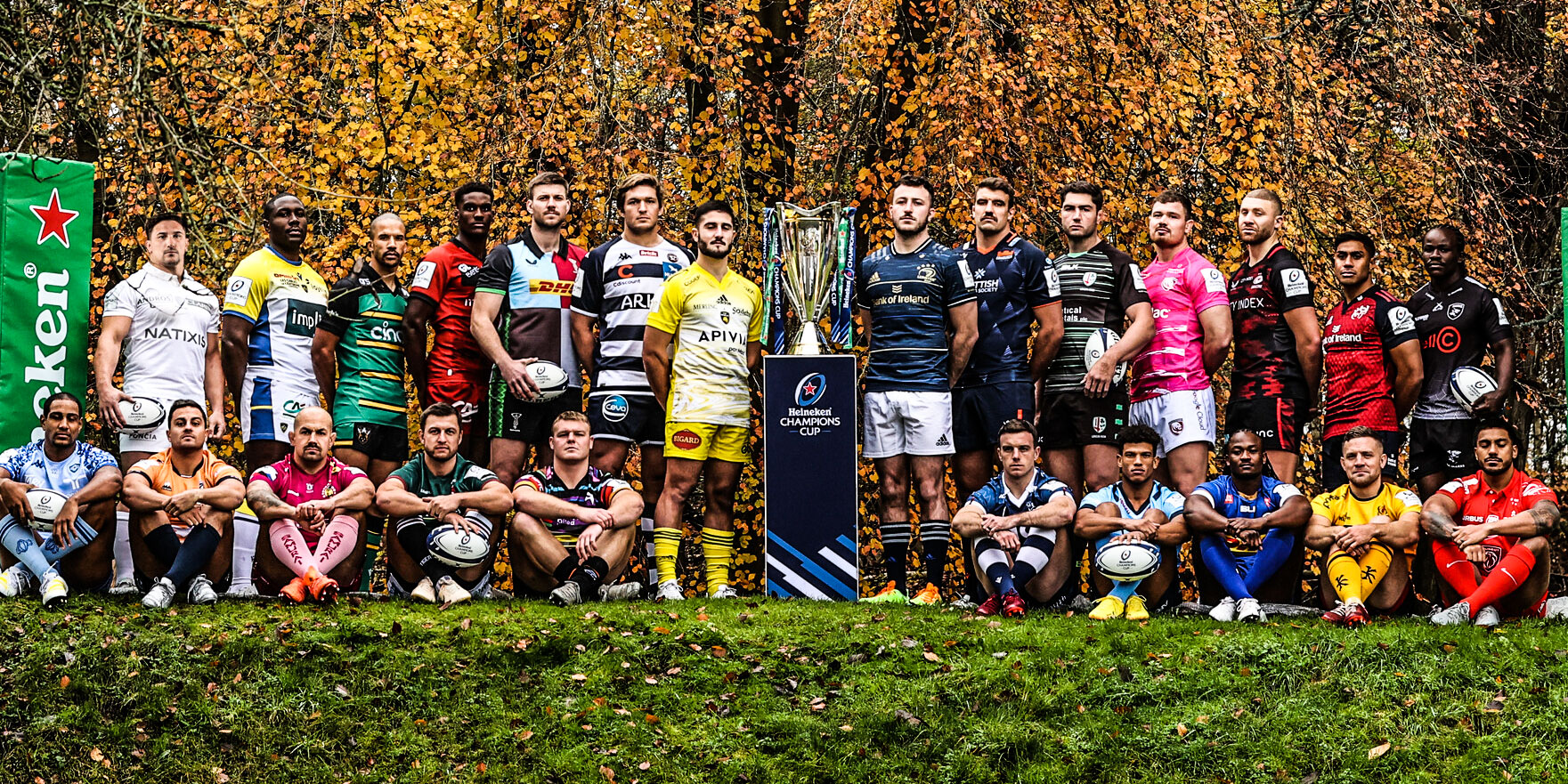 The 24 teams that will participate in the Heineken Champions Cup this year.

Leinster emulated Leicester Tigers’ feat with back-to-back titles in 2011 and ’12, before a powerful RC Toulon squad under the guidance of Bernard Laporte swept all before them with three wins on the bounce between 2013 and 2015.

Off the pitch, negotiations surrounding the future of the tournament and how it should be administered were becoming increasingly fraught, and eventually, as overall control shifted in the direction of the professional leagues in England and France in particular, it was decided to transfer the organisation’s headquarters from Dublin to Switzerland, with ERC morphing into EPCR.

From 2014/15, the newly-styled Champions Cup became more streamlined with 20 clubs, and qualification was based on performances in the Gallagher Premiership, the TOP 14 and on what would eventually become the United Rugby Championship. Saracens triumphed in Lyon in 2016, then retained the trophy the following season, before flying the flag for the Premiership again with victory in Newcastle in 2019.

In between, Heineken, came back on board as title sponsor, and the final moved outside of the traditional six nations for the first time with Leinster claiming a fourth success in Bilbao where Leo Cullen made history by becoming the first title winner as a player and as a coach.

Amid the complications and restrictions of the Covid-19 pandemic, Exeter Chiefs broke through in 2020 when they defeated Racing 92 in a memorable decider in Bristol, and then 2021 was marked by the return to the podium of Stade Toulousain who lifted the trophy for a record fifth time at Twickenham.

As the 28th season of this great tournament approaches, the challenge now for the competing clubs is to emulate the feat of Stade Rochelais whose triumph last season in front of a big attendance at the Stade Vélodrome in Marseille sparked off wild celebrations.

If the 2023 outcome is tantalisingly uncertain, what we can be sure of is that the Heineken Champions Cup, with its 13 elite winners, its iconic clubs, its global stars, its 22 million spectators to date and its broadcast reach to over 150 countries worldwide, is unrecognisable from those humble beginnings in 1995.

So, with a special welcome to the South African representatives, we ready ourselves for another season of thrilling matches, memorable moments and outstanding match-day experiences for fans of the competition as all roads lead to next May’s final at Dublin’s Aviva Stadium.

Excitement levels on the rise for De Bruin

There is genuine excitement in the Springbok Women's Sevens squad with the countdown to the kick-off of the HSBC Cape Town Sevens – the South Africa leg of the HSBC World Rugby Sevens Series – now down to three days.

The nominees for the inaugural Vodacom United Rugby Championship Unity Awards, which recognise the great work done by players and teams within their communities and for charitable causes, have been announced.