The victory is also a first for the new coaching regime of Sandile Ngcobo and his assistant, Philip Snyman.

The final started in spectacular fashion with Shilton van Wyk blitzing the Irish defence with a sharp break and he finished under the sticks, giving Ricardo Duarttee the easiest of conversions.

Van Wyk, who was named Player of the Final, was soon at it again, slicing through the opposition's defensive line with Duartee’s conversion pushing the lead to 14 points.

That was also the halftime score and as expected the Irish came back strong in the second half. Their early endeavor were dealt a cruel blow when Siviwe Soyizwapi intercepted a pass and ran all of 60m to score. Duarttee extended the lead to 21-0.

The South Africans were starting to concede a number of penalties on defence and Ireland managed a score when Jack Kelly after 11 minutes of play. The last three minutes were played in the middle of the field, with a strong South African defensive effort keeping Ireland at bay to score a famous win.

For Soyizwapi, the effort was expected: “We had a hard chat after our defeat in the first round against Great Britain. There are so many good sides in the world series and you need to be sharp in every match. We decided to get stuck in and that delivered some fantastic performances. I am really proud of the  squad and everyone involved.” 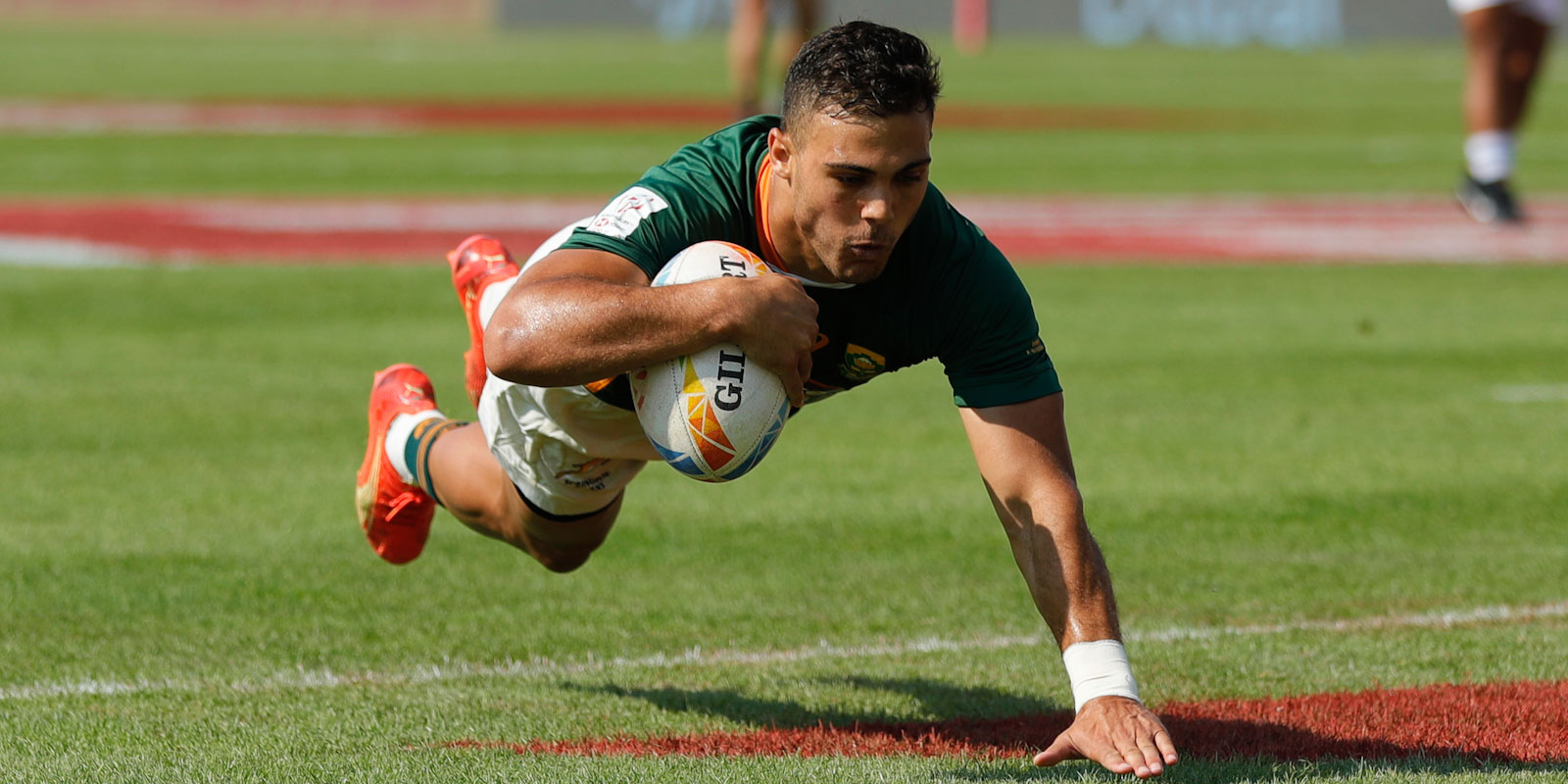 The Springbok Sevens team outlasted New Zealand in a dramatic semi-final earlier on Saturday, earning a fourth consecutive final berth in Dubai. A try 50 seconds into injury time by Van Wyk saw the Blitzboks win 26-19, after twice coming from behind in a wonderful game of sevens rugby.

New Zealand started strong and scored twice in the first half to gain a 12-0 lead at the break. Caleb Tangitau outsprinted the Blitzboks in his first of two tries in the half after three minutes and he bagged the second right at the end of the half.

The Blitzboks suffered a blow with Dewald Human limping off at the same time.

The second half started in dramatic fashion as Muller du Plessis gathered the ball from the kick-off and ran 50m to get his team on the board. Duarttee kicked the conversion and scored a snipers try a minute later to put the Blitzboks ahead for the first time.

Akuila Rokolisoa took that lead away from the South Africans again with a converted try, putting them in a 19-14 lead with two minutes to play.

The Blitzboks attacked from all angles and New Zealand were given a yellow card for not rolling away. Branco du Preez exploited the numbers to score from close range, but the conversion went wide and NZ's lead remained two points at 19-17.

The Blitzboks won the ball back from the restart and after numerous phases, and with the clock in the red, Van Wyk crashed over for the winning try, with Du Preez's conversion a formality.

Ireland beat the USA to secure their first Dubai final. 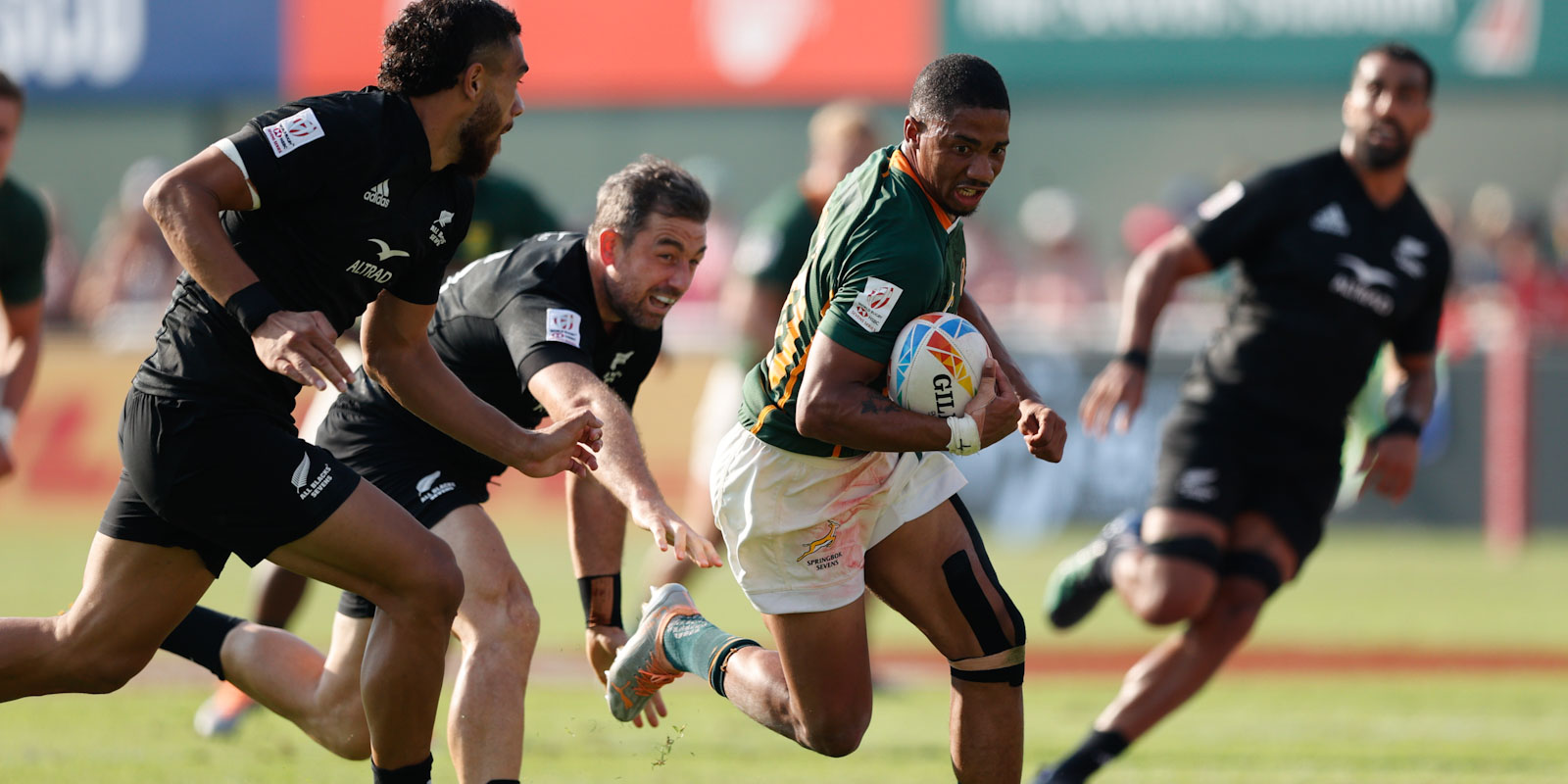 Shilton van Wyk on his way to score the match winner against New Zealand Sevens.

Earlier, South Africa claimed a hard-fought 24-19 win over Samoa in the Cup quarter-final of the Emirates Dubai Sevens and will meet New Zealand for a place in the final later on Saturday.

Their refusal to give up and a swarming defence were the main instigators for South Africa, while scrumhalf Ricardo Duarttee also had a huge game for the Blitzboks. The nuggety player scored two tries and initiated another as the team crawled their way back from 12-0 down in the first half.

Samoa got onto the board in the second minute when Vaa Apelu Maliko ran hard to touch down despite a good covering tackle from Dewald Human before Uaina Sione dotted down after the Blitzboks fluffed their lines from the resulting restart. They conceded possession and Samoa pounced for a converted try and 12-0 lead.

Duarttee then scored a brilliant try. Samoa had players in front of the ball at the kick-off and from the resulting penalty, Duarttee tapped and went all the way to the Samoan line, stepping and hand-off defenders along the way.

Two minutes later he bamboozled the Samoans defence again, this time offloading to Muller du Plessis, who scored the try to even scores at the break.

Samoa started best in the second half, with Paul Scanlan scoring and converting to put his side 19-12 up, but then Duarttee stepped up again, scoring a try after another tap and go close to the Samoan line.

South Africa had the upper hand defensively and this stage and Samoa battled to get out of their red zone. From a turnover on defence, the Blitzboks switched defence into attack and James Murphy raced over. The conversion by Human was good and his side was in the lead for the first time with a minute to play.

That was played in the Samoan 22m area, with solid defence keeping them at bay until the final whistle and a well-deserved win for the Blitzboks.

The Springbok Women's Sevens finished top of Pool A of the International Invitational tournament at the Dubai Sevens and will play Ireland Invitational in the quarter-finals of the tournament on Saturday.

The Cell C Sharks, fielding a new-look side after their big defeat against Cardiff last weekend, beat the Ospreys 25-10 in their Vodacom United Rugby Championship clash at Hollywoodbets Kings Park Stadium on Friday night.

Springbok lock Salmaan Moerat will captain the DHL Stormers in their historic first Vodacom United Rugby Championship match in Gqeberha on Saturday, when the Capetonians host the Dragons from Wales at Nelson Mandela Bay Stadium, with kick-off at 14h00.

The Vodacom Bulls have been given a boost by the return of a number of Springboks as Marco van Staden, Johan Goosen, Canan Moodie, Cornal Hendricks and Kurt-Lee Arendse return to the match-23 for the Vodacom United Rugby Championship clash against Cardiff in Pretoria on Saturday.