A short history of the EPCR Challenge Cup

The Emirates Lions and Toyota Cheetahs will join teams from all over Europe in the EPCR Challenge Cup this weekend, so let's look back at the history of this entertaining competition.

In its various guises since the inaugural 1996/97 season, the EPCR Challenge Cup has proved to be a highly valuable competition for established and emerging clubs alike, bringing with it the promise of coveted silverware as well as guaranteeing the winners qualification for the Heineken Champions Cup.

With the Emirates Lions and the Toyota Cheetahs entering the fray this season, South Africa will add their name to the list of 10 countries – England, France, Ireland, Italy, Portugal, Romania, Russia, Scotland, Spain and Wales – whose clubs have already competed in the tournament.

And while the EPCR Challenge Cup has been specifically designed to complement the Heineken Champions Cup, it should be noted that several of the world’s best-known professional clubs such as Leinster Rugby, Harlequins, ASM Clermont Auvergne, Wasps, Cardiff Rugby and Stade Francais Paris have lifted the trophy, and that legendary players such as Fabien Galthié, Keith Wood, Lawrence Dallaglio, Sam Warburton, Sergio Parisse, Johnny Sexton and Handré Pollard have all been part of winning teams over the past 26 years.

In all, as many as 17 nations have been represented on the winners’ podiums since Bourgoin from France became the first successful club when they defeated Castres Olympique in the 1997 final.

At the outset, the competition was styled as the European Conference, and following Bourgoin’s initial triumph, France had a firm grip on the trophy with further wins by Colomiers, Montferrand – now ASM Clermont Auvergne – and Section Paloise, and to emphasise that dominance, all eight finalist clubs between 1997 and 2000 were French.

Following Harlequins’ dramatic extra-time victory against Narbonne in 2001, it was the turn of the Premiership to hold sway with six titles in a row. Quins won for a second time, Sale Sharks were also successful twice, Wasps, with Warren Gatland and Shaun Edwards calling the shots, laid the platform for later Heineken Champions Cup glory with a win in 2003, and Gloucester Rugby lifted the silverware in 2006.

During this period, Parker Pen had come on board as sponsor of what was now termed the European Shield before the competition morphed into the European Challenge Cup, and then the Amlin Challenge Cup in 2009 when the insurance company took over as title sponsor until 2014. 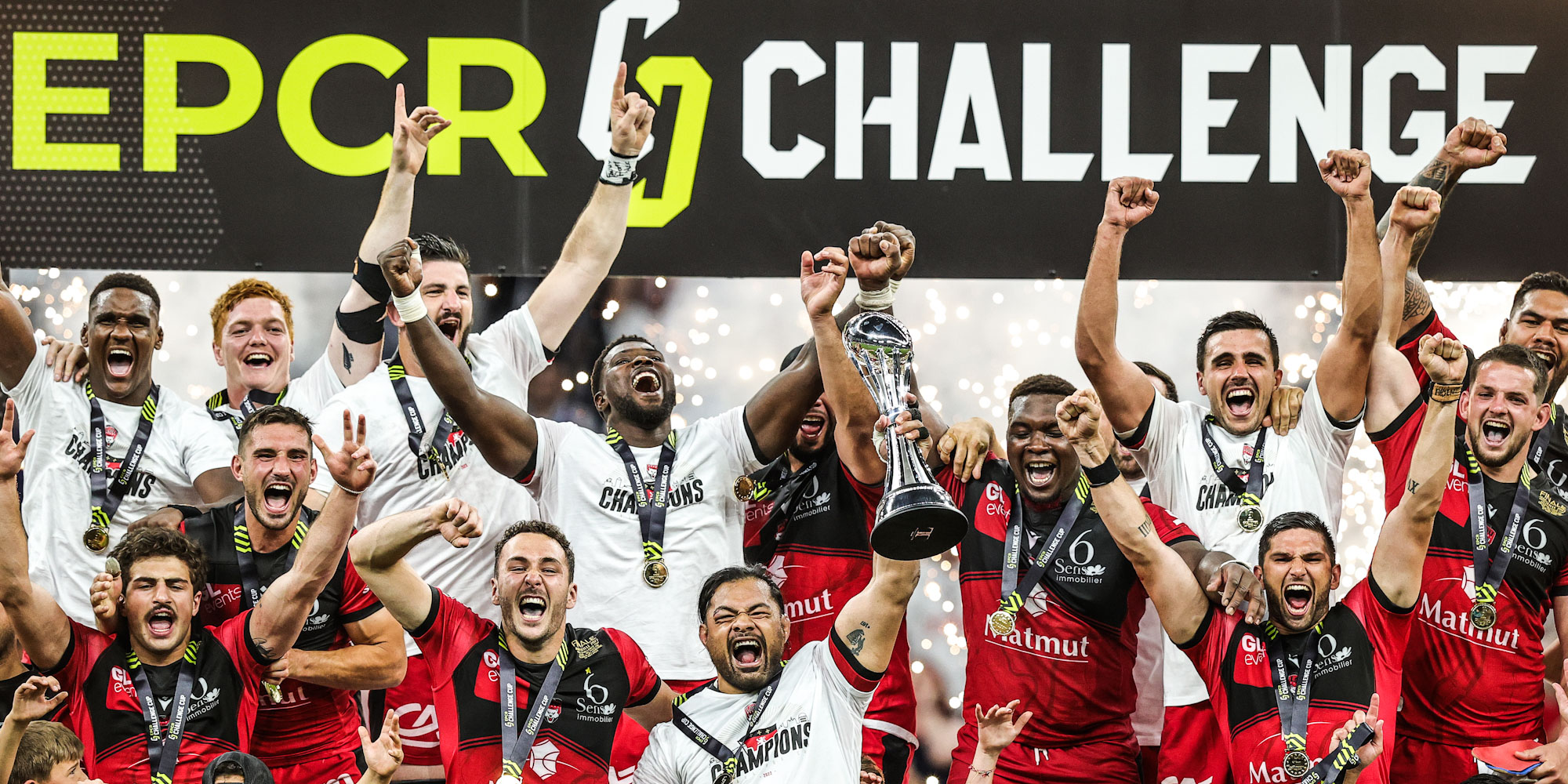 Lyon will be defending their EPCR Challenge Cup title this season.

The Anglo-French hegemony was temporarily halted in 2010 when Cardiff made the breakthrough for Wales by defeating RC Toulon in a pulsating decider at Marseille’s Stade Vélodrome in front of 48,990 spectators, a record at the time for a Challenge Cup final which was only eclipsed by last season’s 51,431 attendance when Lyon got the better of RC Toulon at the same Marseille venue.

And to accentuate the quality at the business end of the competition, Cardiff’s winning match day squad in 2010 included the likes of Martyn Williams, Gethin Jenkins, Jamie Roberts, Leigh Halfpenny and Sam Warburton, while Jonny Wilkinson, Sonny Bill Williams, Juan-Martin Fernandez Lobbe and Joe van Niekerk were in the Toulon ranks.

The trophy continued to yoyo between leading French and English clubs for the most part although Joe Schmidt’s Leinster intervened in 2013 to claim a success for Ireland when they overcame Stade Francais Paris at Dublin’s RDS Arena, and Edinburgh Rugby became the first Scottish side to reach a European final only to lose out to Gloucester at the Twickenham Stoop in 2015.

There were memorable first European triumphs for Montpellier Hérault Rugby – coached by South Africa’s 2007 World Cup-winner Jake White – for Stade Francais Paris and for Bristol Bears. Meanwhile, Cardiff registered a second success with a dramatic one-point victory over Gloucester at Bilbao’s San Mamés Stadium in 2018, as did Montpellier with their 2021 win against Leicester Tigers at Twickenham.

Clermont and Harlequins now lead the way with three EPCR Challenge Cup titles each, and to date, four clubs – Bath Rugby, Northampton Saints, Wasps and Leinster – have managed to win both the Heineken Champions Cup and the Challenge Cup,

In 2022, it was the turn of Lyon to celebrate in Marseille when they so impressively claimed a first trophy of any kind since 1933, and their EPCR Challenge Cup success is now indelibly inked into the history of the club.

It might be a competition overshadowed by its glamorous sibling for part of the season, but try telling that to Lyon and to other previous winners. They don’t quite see it that way, and neither will whoever lifts the trophy in Dublin next May.

Excitement levels on the rise for De Bruin

There is genuine excitement in the Springbok Women's Sevens squad with the countdown to the kick-off of the HSBC Cape Town Sevens – the South Africa leg of the HSBC World Rugby Sevens Series – now down to three days.

The nominees for the inaugural Vodacom United Rugby Championship Unity Awards, which recognise the great work done by players and teams within their communities and for charitable causes, have been announced.