The hosts won 15-6 last weekend, but this time the South Africans had too much sting in their attack and never looked back after a 12-5 lead at the break.

Springbok Women coach Stanley Raubenheimer said afterwards the victory was special in so many ways, and he especially felt it was a testimony to the belief of the group to stick to their plans and processes.

“There are so many emotions after this win, even more so because of the team,” said Raubenheimer.

“This was a very emotional tour, a tough one and one where we had some very open and hard conversations with our players. So, I am really happy for them that they could be rewarded by winning, as it means so much to them.

“Also, for the management there is some reward in this. We have been together for a couple of years now and this very first win on the road will be savoured for a long time.

“We had chances in the past – I am thinking of Spain in 2019 and then Wales last year and even Japan last weekend – so to now finally get it over the line means a lot to us as well.”

Raubenheimer said the success of the tour can be attributed to the players’ refusal to surrender in Kumagaya: “I think our defence was outstanding today; it was one of the most rewarding defensive efforts in a long time and it probably won us the match. There were many instances where we were under severe pressure, but they chased down Japan and stopped them from scoring.

“It was also very pleasing for us to get over the line three times, especially after so many opportunities went begging last weekend. I thought the tries – especially the two scored by Ayanda Malinga – were exceptional."

Raubenheimer said the win also confirmed that their Rugby World Cup preparations are on track.

“Look, we are way behind the top teams, and no one denies that,” he said. “We are still a work in progress when it comes to the top teams, but at least we are putting the right things in place.

“It will take time, but if I look where we were a year ago post COVID and how we have progressed to be able to beat Japan, it is a very good feeling. The players now also have something to show for their hard work.

“We now have another big battle when we take on Spain back home, but for now, we will savour this very, very special win.”

The first half, which proved a very tight affair, was probably where the Springbok Women laid the foundation for this historic victory.

South Africa were under early pressure after once again fluffing the kick-off, this time by knocking the ball on when receiving. They managed to keep the Japanese at bay in the early attacks, but after a number of pick-and-drives, the home side evaded the desperate tackles from their African opponents and scored in the opening five minutes of the match.

Some positive play by the Springbok Women resulted from that and they showed some early dominance in the scrums, but with hooker Lindelwa Gwala misfiring early on, they could not get any real attacking foundations from the lineouts.

The South Africans were starting to wear down their hosts physically though and a number of crunching tackles by the likes of Babalwa Latsha and Sizophila Solontsi caused further havoc amongst the home side’s attacking plans.

All other areas of play were on par, with the Japanese winning the kicking game by a short margin, but the next three minutes suddenly showed how dangerous the Springbok Women can be when they manage to keep possession. 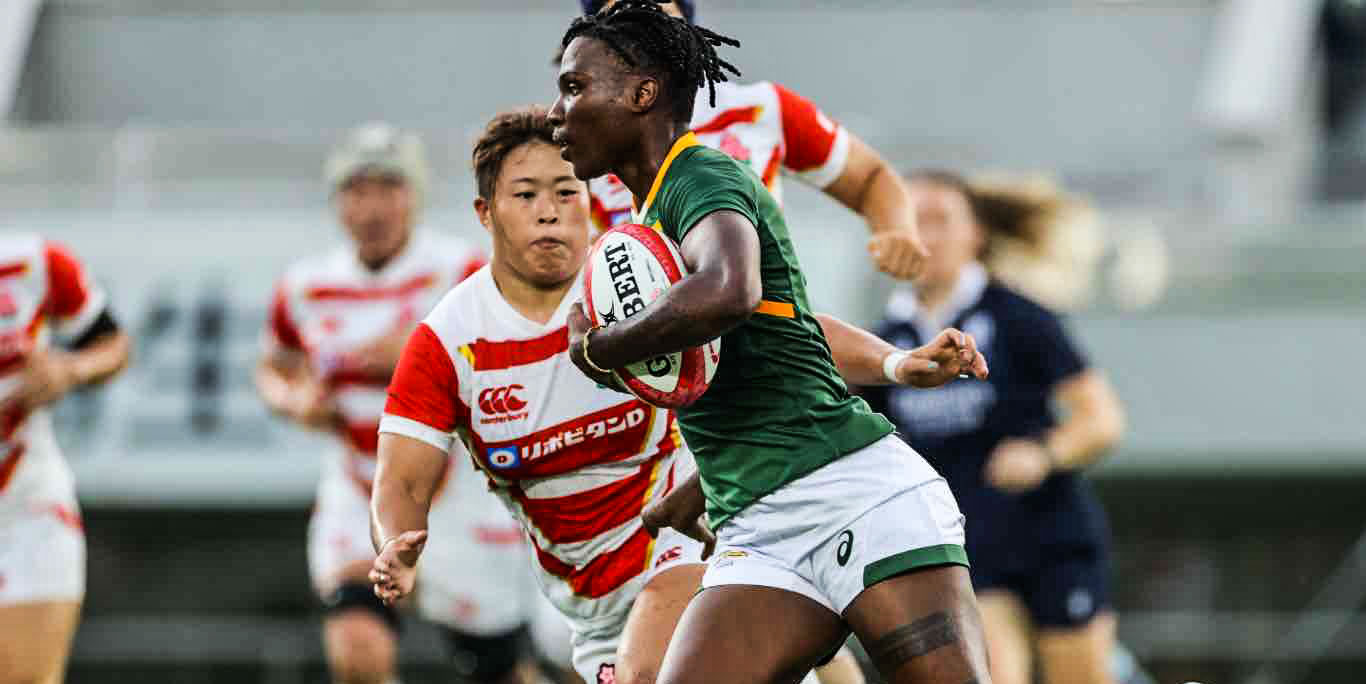 First Libbie Janse van Rensburg sliced through a gap and when the flyhalf was stopped, she found a willing and able Malinga on the wing. The speedster knows her way to the tryline and in a blink, a converted try saw the South Africans up by 7-5.

From the restart, Malinga struck again. The kick-off was gathered, Latsha made a break and offloaded to Lusanda Dumke. The flanker ran hard and at the right time moved the ball to Malinga, who stepped inside two defenders with ease and from there just did enough to beat the Japanese cover defence, coming from all angles.

For Malinga, the second try was the most satisfying: “I think I had to work harder for that second one. I went to the middle of the two defenders and got past both of them and used my hand to fend off another. I knew they were coming, but I was not looking back, I only had my eyes on the line,” she said afterwards.

Janse van Rensburg could not convert but the 12-5 lead was solid, and it was a confident SA side that went into to the changeroom at halftime.

The second half started with an improved effort by Japan, who managed to hold onto the ball better despite being swarmed by the South African defence.

They launched a number of dangerous attacks and almost scored in the right corner, but for brilliant defence by Nadine Roos, who had an outstanding game. Japan tried in vain to break the midfield of South Africa, where Zintle Mpupha stood strong and created a number of telling stops in that direction of the field.

The South Africans dispelled the wave of red and white and then started to turn the screws themselves. Janse van Rensburg kicked a penalty goal to extend the lead to 15-5 with 20 minutes to play.

Simamkele Namba sealed the deal three minutes from time when she scored in the right-hand corner. The wing was put into space after a brilliant run from the back by Roos, but she still had to step inside and out for her try.

The home side scored a try in injury time, but that was never going to be enough to erase the Springbok Women’s very first Test win away from home from the record books.

Small margins will be crucial for Springbok Women

Their tour to Japan – despite the result of Saturday’s second Test against their host nation in Kumagaya Rugby Stadium – is already a huge success for the Springbok Women and their journey towards the Rugby World Cup in New Zealand in October this year.

SA Rugby and its IT partner Dell Technologies have introduced an immersive Virtual Reality (VR) Experience to enhance the fan experience at all international games played in South Africa until 24 September 2022.