The Springbok Sevens were in firm control of their Commonwealth Games quarter-final on Saturday evening as they beat Canada by 33-0 to advance into the top-four, where they will meet Australia at 14h04 on Sunday afternoon at the Coventry Stadium in Birmingham.

They will be without Siviwe Soyizwapi though, as the SA captain’s tournament was cut short after he was injured against Scotland earlier on Saturday – a match the Blitzboks won by 34-0.

Meanwhile, the Springbok Women’s Sevens will face Sri Lanka at 19h00 on Sunday evening in the seventh-place playoff.

Zain Davids, who took over the captaincy in the quarter-final from Soyizwapi, said: “We will always be happy with a victory, especially as we stuck to our processes, defended well and we also did our basics well, so I think we can be happy.

“Losing ‘Shakes’ is not great – he is a proper leader who leads from the front and never gives up, the players really look up to him and we realise we have big shoes to fill, but we will try and do that for Siviwe.”

On their semi-final opponent, Australia – who beat Samoa by 7-0 in their quarter-final – Davids said they will approach it as any other game: “It doesn’t matter who we play, for us it’s ‘game five on day three’ and our focus will be on sticking to our processes and getting our basics right.”

Against Canada on Saturday evening, three first-half tries – by Ronald Brown, Christie Grobbelaar and Angelo Davids – set up a 21-0 lead at the break, with Angelo Davids's intercept-try from 80m out – while Brown was in the sin-bin for a high tackle – summing up the SA team’s dominance.

The Canadians tried hard, but defensive pressure from SA saw them make a number of unforced errors, which the Blitzboks pounced on with gratitude.

Angelo Davids scored his second hat-trick of the tournament against Scotland on Saturday morning.

Brown got his second try not long after returning to the field shortly after the break, scoring from a Canadian mistake to stretch the lead to 26-0.

Mfundo Ndhlovu, who was declared fit after taking a heavy knock on the first day, also got his name on the score sheet with just over a minute left in the game.

The first semi-final in the men’s competition kicks off at 13h42, with defending champions New Zealand taking on Fiji.

Angelo Davids scored second-half hat-trick – his second of the tournament – as the Springbok Sevens team recorded a splendid 34-0 victory over Scotland to claim first place in Pool B on Saturday afternoon.

The South Africans went into the halftime break leading by 10-0, having scored the only points of the first half through Selvyn Davids and JC Pretorius. However, they moved into a higher attacking gear after the break to score four more tries – three via Angelo Davids and a fourth by Shaun Davids – to race away in impressive fashion.

With both teams vying for top spot in Pool B, the opening half was understandably a tough arm wrestle, with neither wanting to give possession away.

The SA team worked their way into the danger zone and Selvyn Davids did just enough to get over the line despite the attention of a desperate tackler. He was followed over the line by Pretorius, who reacted quickly to snap up a loose ball from a clever kick ahead before diving over.

South Africa used their kicking game to good effect in the second half, enabling strong-running Angelo Davids to dot down three times in succession to take the score to 27-0.

With playmaker Selvyn Davids again in great form and pulling all the strings, the fleet-footed attacker sent Shawn Williams over for the final score and to seal a splendid victory which saw them finishing top of their group. 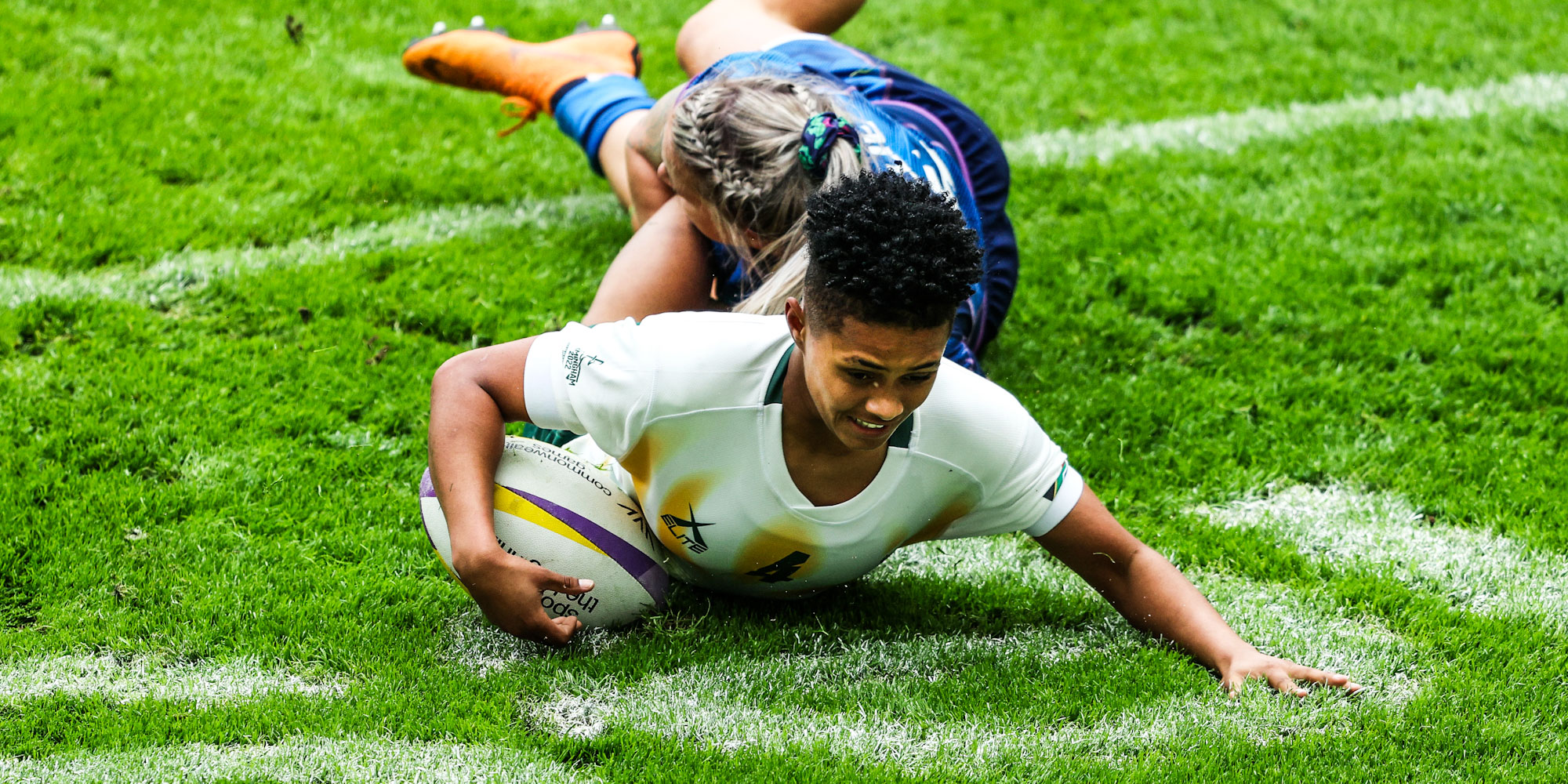 Donelle Snyders goes over for her try against Scotland.

The Springbok Women's Sevens team will contest the seventh-place play-off against Sri Lanka at 19h00 Sunday after they lost both their matches on Saturday.

In their first clash on Saturday morning, the SA Women delivered their best effort so far at the Commonwealth Games, but they still went down 33-12 against Scotland in their final Pool B clash.

Liske Lategan scored the South Africans' first points at the Games when she went over in the corner following a lovely passage of play.

However, Scotland hit back with four tries to race into a comfortable halftime lead, with the speedy Rhona Lloyd scoring two of her three tries before the break.

The South Africans lost their previous pool matches against Australia and Fiji but they were definitely more confident against Scotland, who were also searching for their first win at the Games.

Donelle Snyders reduced the deficit to 26-12 after the break and they gave a good defensive display despite having Unathi Mali in the sin bin for a technical foul.

However, they were unable to contain the electric pace of the flying Lloyd out wide, who raced through clean for her third try of the match to seal a convincing 33-12 win for the Scots. 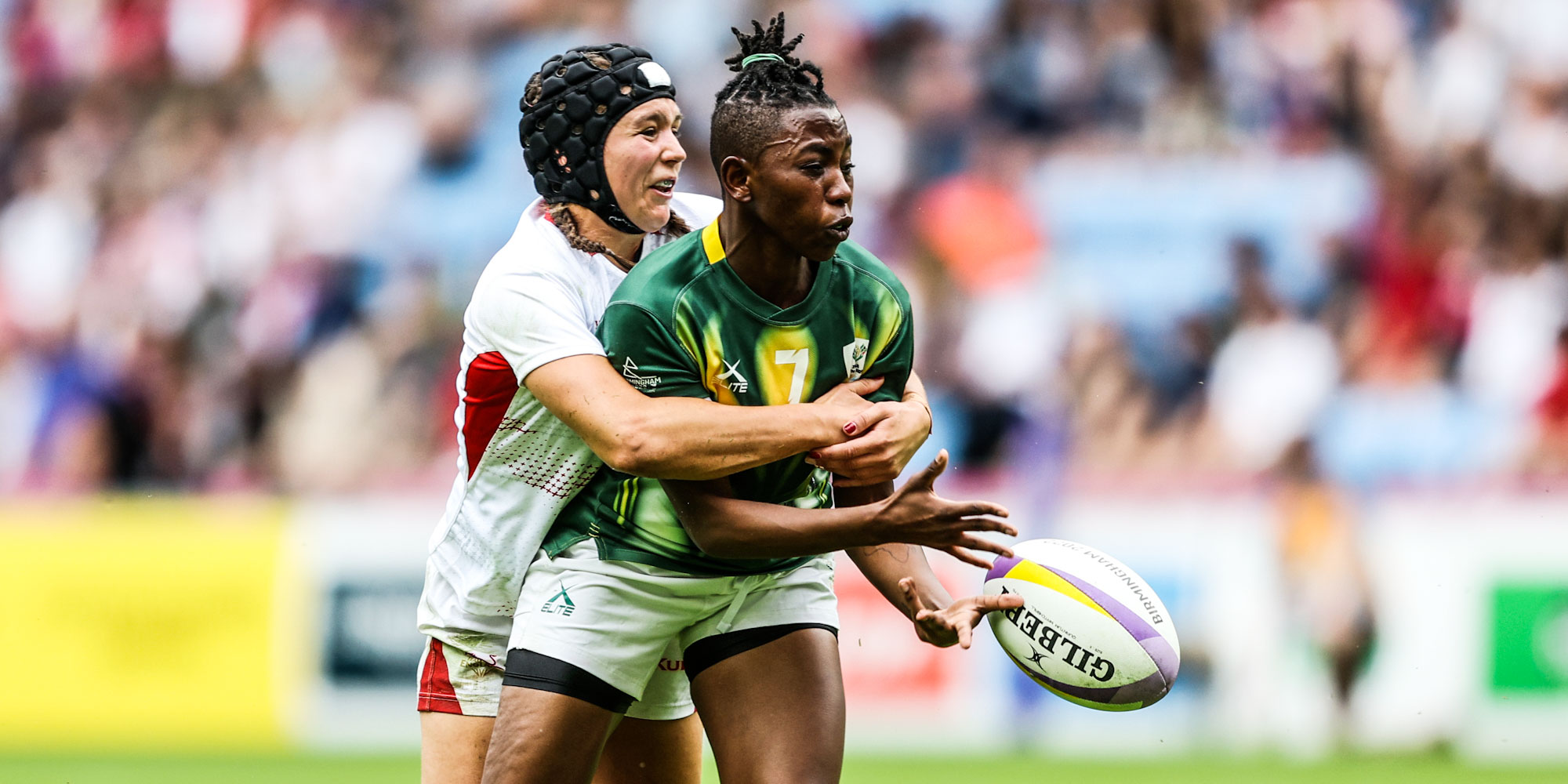 In their second game on Saturday, England defeated the SA Women 36-0 in their fifth-place semi-final, scoring twice in the first half to lead 12-0 before turning on the style in the second half to record their first win in four attempts.

The SA team threatened early on and worked their way to just short of the English try-line. Zandile Masuku made a strong run and was brought down just before the whitewash, which was their best scoring opportunity of the first half.

England reacted swiftly with Heather Cowell running in a long range try from turnover ball to score the first try of the match. She was followed shortly afterwards by Emma Uren, who sliced through the SA defence to score their second try to take the halftime score to 12-0.

The home nation started the second half on the front foot and the SA defence scrambled well to keep them at bay, however, the pressure eventually resulted in a try for Merryn Doige who burst through for their third try which took their advantage to 17-0.

Isla Norman-Bell then crossed over for a quickfire double as England took the game away from the plucky South Africans who fell further behind, while Amy Wilson-Hardy scored the last try to take the final score to 36-0.

Small margins will be crucial for Springbok Women

Their tour to Japan – despite the result of Saturday’s second Test against their host nation in Kumagaya Rugby Stadium – is already a huge success for the Springbok Women and their journey towards the Rugby World Cup in New Zealand in October this year.

SA Rugby and its IT partner Dell Technologies have introduced an immersive Virtual Reality (VR) Experience to enhance the fan experience at all international games played in South Africa until 24 September 2022.