Talking points from the Junior Boks’ win over England

The Junior Springboks delivered a five-star performance to see off England 30-22 in a pulsating start to the Six Nations Under-20 Summer Series in Verona, Italy on Friday, scoring five tries in total as they ended a run of five straight defeats against the English at U20 level to get their Pool A campaign off to a great start.

A Suleiman Hartzenberg double in addition to tries from Nico Steyn, Cameron Hanekom and substitute Tiaan Lange carried the SA U20s over the line, while John Stewart, captain Emeka Ilione and Conor Oresanya registered for a spirited England side.

Patient and potent in equal measure, Duran Koevort stole the show in Verona. In an arm wrestle of a first half, the Junior Bok fullback proved the difference and played a crucial role in setting South Africa on the path to victory.

His pre-assist for Steyn’s try came after a scintillating bit of footwork and he was involved again in the build-up to Hanekom’s score at the start of the second period.

While captain and flyhalf Mngomezulu was perhaps more eye-catching and daring on the ball, Koevort provided control, both in attack and defence, steering his side to victory in a game decided by fine margins.

If Mngomezulu’s cross-field kick is a sign of things to come over the next two weeks, then rugby fans are in for a real treat.

Just four minutes into the opening game of the tournament, the SA flyhalf’s pinpoint kick which seemed destined to bounce into touch ballooned off the Payanini Center turf and into the grateful hands of Hartzenburg.

Whether it was deliberate or not, it was a touch of genius and certainly gave Mngomezulu the confidence to try and dictate proceedings with his right-foot.

Moments later he tried an audacious drop goal from some 40 metres out and had pulses raising inside the stadium with each step and pass he attempted.

Steyn’s audacious pass between his legs prompted just as many gasps from the stands and might have had the edge over Mngomezulu’s nudge had it led to a try. 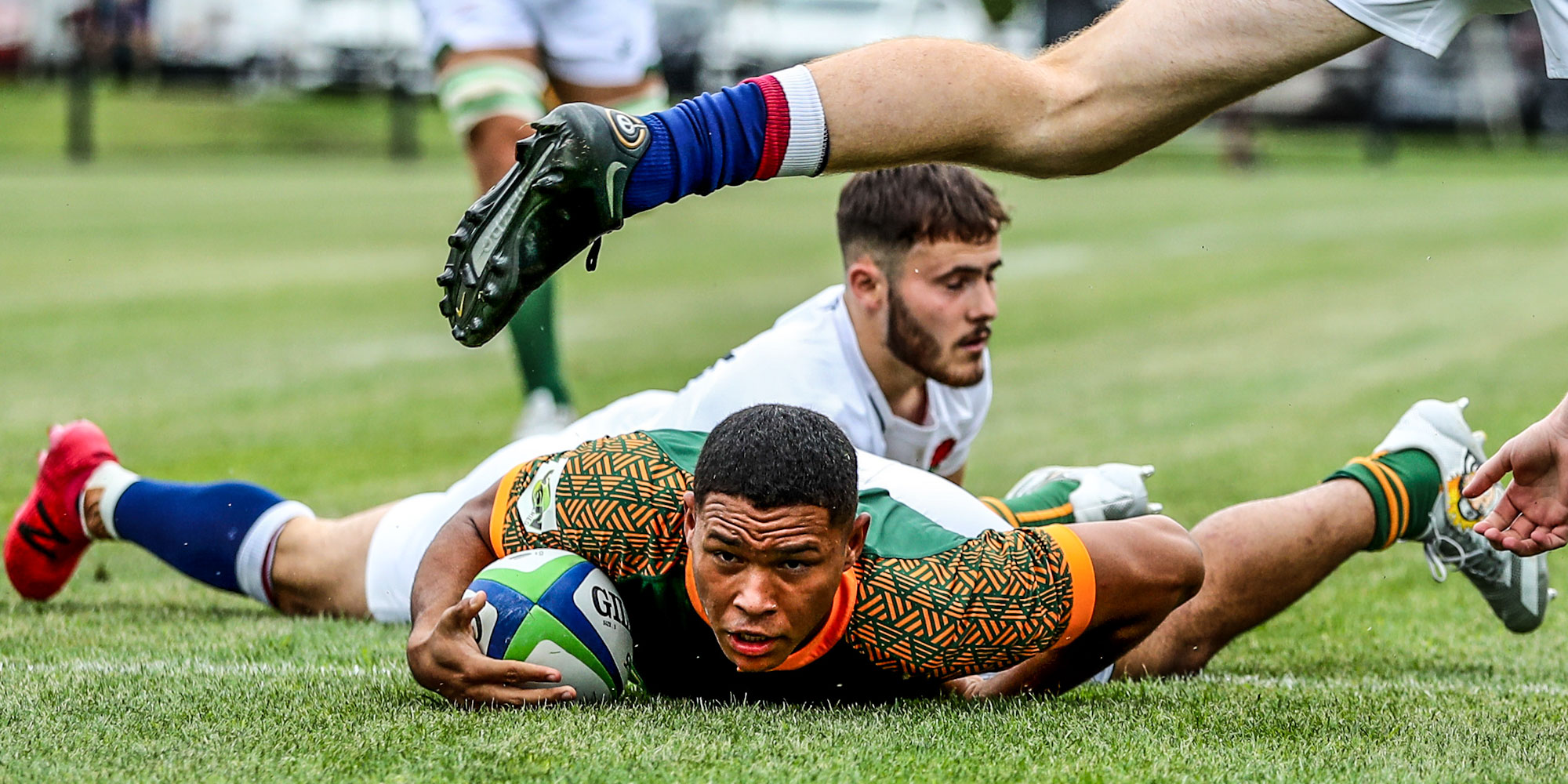 Suleiman Hartzenberg scored a crucial early try in the clash against England.

With South Africa growing into the contest midway through the first half, No 8 Hanekom seemed to have turned pressure into points. But after a thorough look at the pitchside monitor, referee Eoghan Cross disallowed the try, with Steyn deemed to have blocked off a potential tackle attempt.

The cocktail of an anxious wait, confused crowd and suspenseful music as Cross considered his decision recreated a scene familiar to fans of many Premier League football clubs.

But the verdict only stirred the South Africans, who were determined to capitalise on their dominance having worked so hard to turn the tide after England’s bright start.

Steyn’s try on the stroke of half-time gave the Junior Boks the momentum going into the second period, and that was the boost they needed to assert themselves after the break.

Arguably it was a case of not one defining moment, but two in this match. With the clock ticking down in the first half, Donovan Don stepped his way through the England backline and after a delayed pass from Koevort, Steyn had the simplest of finishes.

Their next score, five minutes into the second half was a carbon copy. Koevort and Don were again involved, running from deep, before Mnogmezulu teed up Hanekom to gallop home.

Those 10 points either side of half-time took South Africa out of reach and left England with too much to do in the closing stages.

France have ended their Under-18 International Series campaign on a winning note with a 20-15 (halftime 12-12) victory o...

SA U18s hope to sign off in style on Saturday...

The South African Under-18 teams are aiming for improved performances when they wrap up the U18 International Series aga...

The South African Under-18s are the only unbeaten team left in SA Rugby’s U18 International Series after an impressive v...

The Down Touch Griffons ended their 2022 season in perfect fashion with a commanding 45-16 win over Eastern Province at HT Pelatona Projects Stadium in Welkom on Friday, winning the Carling Currie Cup First Division title, having last lifted that coveted trophy in 2017.

Today, exactly 27 years ago, Francois Pienaar led the Springboks to what many believed was an impossible task as they lifted the Webb Ellis Cup in South Africa, and in 77 days, the country will host a second global showpiece when the Rugby World Cup Sevens kicks off in Cape Town.

Catch the Junior Boks' opening game in the U20 Summer Series, at 17h00 against England from Verona in Italy, live here. We also have Afrikaans commentary, provided by the tournament organisers - watch on the lower video.

Roos comes up top with Player of the Season Award

DHL Stormers No 8 Evan Roos has completed a dream tournament by walking away with the inaugural Vodacom Player of the United Rugby Championship Season Award, which forms part of the annual SA Rugby Awards.

Record scores of 108-0 against Zimbabwe and 128-3 against Namibia in the Rugby Africa Women's Cup highlighted the growing preparedness of the Springbok Women for the Rugby World Cup in New Zealand, to be played in October this year. But the two-week assembly of the squad in Cape Town also brought delight on a personal level among the squad.

The top Under-16 and Under-18 girls rugby players in the country will start the highlight of their annual season this week when the SA Rugby U16 & U18 Girls Weeks kick off in Welkom on Monday.

Boks insist: "We will not underestimate Wales"

Springbok assistant coach Deon Davids and prop Ox Nché insisted on Monday that they would not underestimate Wales as they started their preparations for the opening Castle Lager Incoming Series Test at Loftus Versfeld on Saturday, saying they had to deliver a quality performance on the day.

Junior Springbok flyhalf and captain, Sacha Mngomezulu, has echoed the words of his coach Bafana Nhleko, calling for an overall improvement in their game and a strong mentality if they want to topple Ireland in their second pool match of the Six Nations U20 Summer Series in Verona, Italy on Wednesday.