When the first play-off games take place on the first weekend of June, there will be two games in Ireland and two in South Africa. That is far removed from what might have been expected given the South African struggles at the start of the new competition, which was effectively the old PRO14 given a new identity and impetus by the addition of the top four South African franchises.

But it is an apt summation of how the South African teams have grown. At the same time, after the last round of league play, there is still a frontier that needs to be crossed for the local sides – the Ulster win over the Cell C Sharks means that a win over a top Irish team on their home soil is still yet to be recorded.

Ulster, Munster and Leinster, the latter with an understrength touring squad, all returned from their trips to South Africa without a win, with Connacht’s win over the Emirates Lions in Johannesburg being the only Irish triumph on South African soil.

However, conversely, the closest a South African team came to winning in Ireland was the DHL Stormers’ two-point defeat to Connacht in Galway.

Although Ulster only beat the KwaZulu-Natalians by only three points in Belfast, they were significantly better for most of the way, which underlined that the South African teams still have some way to go before they can expect to win away against the top three Irish sides.

Perhaps that will happen in the play-off stages of the competition, as the winner of the Loftus Versfeld quarter-final between the Vodacom Bulls and the Cell C Sharks is probably destined to visit Leinster for their semi-final. The word ‘probably’ is used there because Leinster do have to play the Glasgow Warriors first.

If the unexpected happens and the Warriors – who ended up eighth on the final log – manage a win in Dublin, then the winner from the Pretoria playoff will be heading to Belfast if Ulster beat Munster. 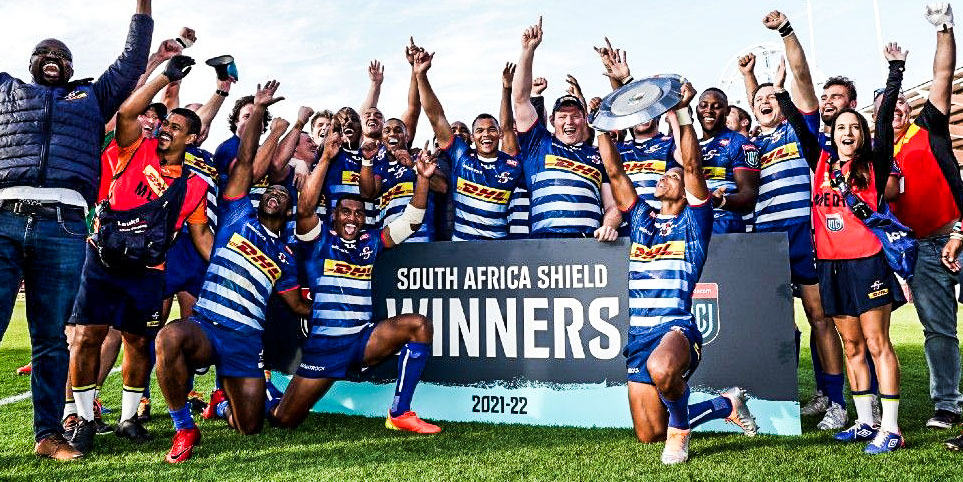 The DHL Stormers celebrate winning the SA Shield after their victory in Llanelli on Saturday.

Leinster finished top of the overall log and are indisputably the biggest obstacle to the other teams with title pretensions. They sent out a positive message about both their own strength and also, by extension, the South African strength by beating Munster with their alternative team – the first choice players were rested for the European final – at the Aviva Stadium.

To beat Munster, who had everything to play for, whereas Leinster had only pride, with what was effectively a second-string team underlined the depth that the perennial PRO14 champions are renowned for. It also put into perspective the wins the Cell C Sharks and DHL Stormers scored over Leinster, as clearly even their “B-team” is still strong.

Munster were the PRO14 runners up last season, but have it all to do if they want to go one better than that by winning the trophy this year. Although they won on their last trip to Belfast, winning at the Kingspan Stadium is a tough task, as the Cell C Sharks found out.

However, the third ranked Irish team doesn’t have as much to do as the two Scottish teams, Edinburgh and the Glasgow Warriors. While the Warriors go to Dublin, Edinburgh have to cross hemispheres to play their quarter-final in Cape Town.

Edinburgh will be boosted though by the knowledge that their good win in the 1872 Derby at Murrayfield has secured them entry into the Champions Cup next year. That was effectively what was being played for, and it was a big prize.

Although the two Welsh teams ended outside of the top eight, the Ospreys advance to the Champions Cup at the expense of the Warriors by virtue of the two bonus points they picked up in a spectacular late comeback against the Vodacom Bulls in Swansea.

There should be some sympathy though for the team they edged out, the Scarlets, who raised their game and produced some excellent attacking rugby before ultimately losing out at the death to the DHL Stormers.

There was nothing on the line, but the progress being made in the Italian game since Italy’s win over Wales in the Six Nations was confirmed by Benetton’s huge win over Cardiff. Zebre Parma were competitive before narrowly losing away to Connacht and are also improving.

Blitzboks own worst enemy in Toulouse

The Springbok Sevens team suffered a third defeat at the HSBC France Sevens in Toulouse on Sunday in what Blitzbok coach Neil Powell described as “the worst performance at a tournament in my career”.

Despite losing by 24-10 to Scotland in their final match of the HSBC France Sevens tournament in Toulouse on Sunday, the 10th place finish achieved by the Springbok Women's Sevens team was a massive result for the team, who were invited by World Rugby to play with the 10 core teams of the HSBC World Rugby Sevens Series.

The Border Ladies continued their dominance over arch-rivals DHL Western Province with a nail-biting 19-11 win in their Women’s Premier Division clash at the Brackenfell Rugby Club on Saturday afternoon, with the team from the Eastern Cape moving to the top of the standings.

The Springbok Sevens squad failed to progress to the Cup quarter-finals of the HSBC France Sevens tournament in Toulouse when they were beaten 19-7 by Samoa in their final Pool D clash on Saturday.

Individual award winners to be revealed

The Vodacom United Rugby Championship is set for a thrilling conclusion in the next few weeks as the competition reaches the playoff stages, with three South African teams in contention for the inaugural title, while 10 individual award winners are set to be revealed before the grand finale on Saturday, 18 June.

The call from Neil Powell was fairly unexpected and the reason for the call mind-blowing for the 20-year-old Jordan Hendrikse, but the request by the Springbok Sevens coach to join the Blitzboks in London has had the talented flyhalf buzzing with excitement.