An outstanding performance from a well-organised Australia inflicted a 30-17 defeat on the Springboks at the Suncorp Stadium in Brisbane on Saturday – their heaviest loss in 29 Tests since losing by the same margin to Argentina in Mendoza in 2018.

The Wallabies scored four tries – two each to centre Len Ikitau and wing Marika Koroibete - to one from Bok centre Lukhanyo Am, to see the visitors’ hopes of retaining the Castle Lager Rugby Championship hit the buffers.

An early yellow card – this time for scrumhalf Faf de Klerk – again allowed the Wallabies to get the first try on the board and although the Boks fought back well to hold the lead briefly in the second half, unusual defensive hesitancy, and a high error count ultimately cost them.

The mountain they made for themselves began with two tries in seven minutes by Ikitau in the first quarter – while De Klerk was in the sin bin.

De Klerk was sent to the sideline for slapping the ball out of his opposite number, Nic White’s hands in the 13th minute. Scoreboard punishment was instantaneous as Ikitau brushed through two tackles to score halfway out on the Wallaby left, from second phase possession from the lineout.

Flyhalf Quade Cooper surprisingly struck the outside of the upright with what should have been a straightforward conversion. But he was on the mark from a similar position on the right when the Bok defence was exposed shortly afterwards.

Pressure in the Bok 22 and quick hands from left to right created an opening for a delighted Iktitau to dash in untouched from 10 metres. 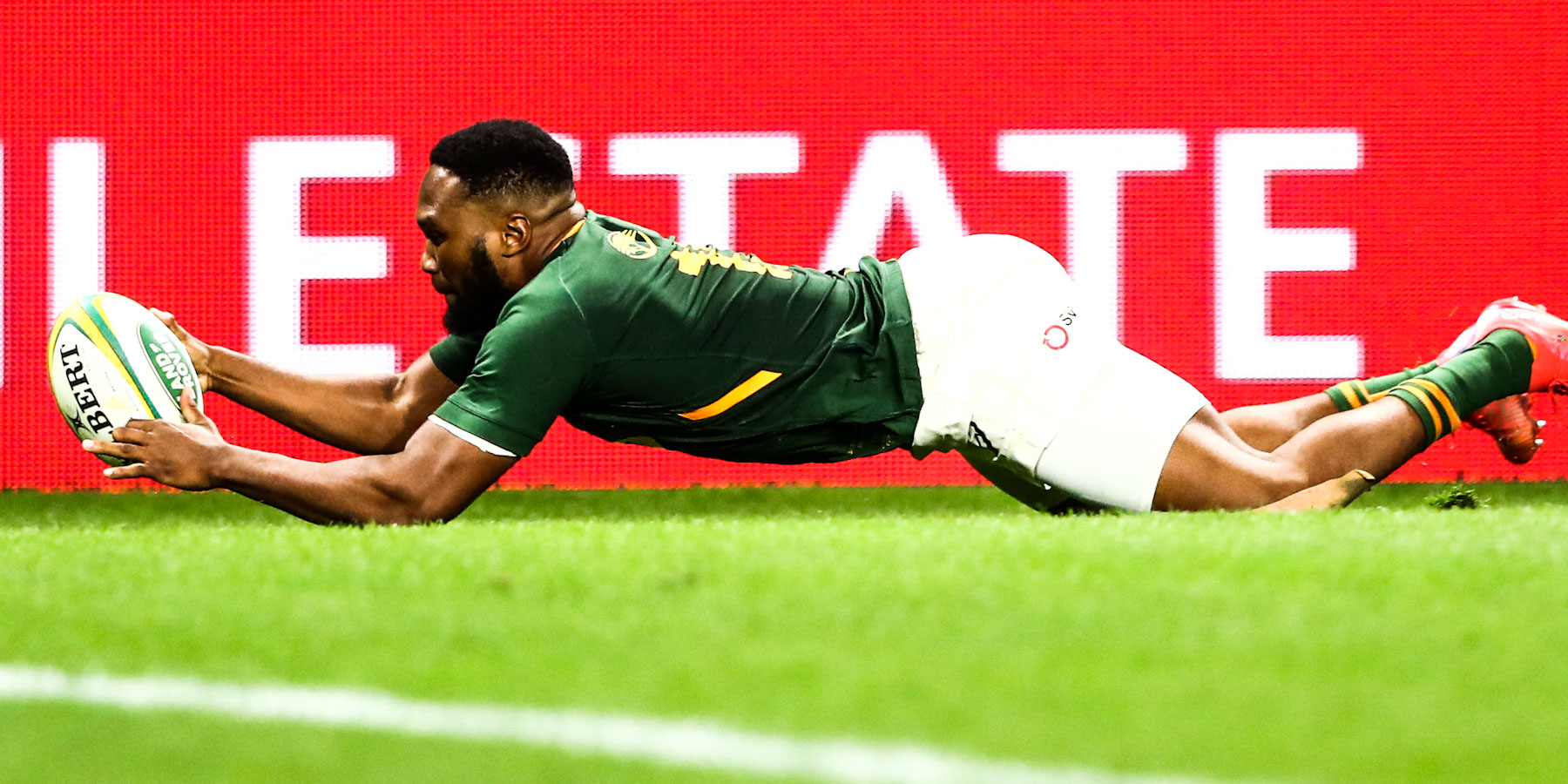 Lukhanyo Am goes over for the Boks' only try in the Test.

Pollard kicked the first of four penalty goals from four attempts in the opening half (between the tries) and when De Klerk returned the deficit was nine points at 12-3.

Three further Pollard penalty goals – to one from Cooper – closed the gap to three points at the break (15-12) as the Boks profited from the sin-binning of Wallaby flanker Lachlan Swinton. Referee Matthew Carley first indicated a red card for a shoulder charge and head-to-head collision on Bok No 8, Duane Vermeulen, but on a further viewing reduced the sanction to yellow.

The Boks extracted further punishment with a try two minutes into the new half from Am. De Klerk poked through a grubber down the blindside of a ruck close to the right-hand touchline for Am to race after it and touchdown in the corner of the in-goal.

Pollard’s touchline conversion attempt stayed out on the near side, but the Boks had the lead for the first time (17-15), but it was to be just a nine-minute luxury.

They were exposed down the blindside of a ruck 40-metres out with quick hands among the Wallaby forwards opening the way for a 30-metre run-in for Koroibete. Then, from turnover possession, he was charging clear again from broken play as the Springbok defence laboured to plug the gaps.

The Boks enjoyed field position for the remaining ten minutes or so, but their day was summed up as the Wallabies twice won ruck turnovers five metres from their own line and the final act was an attacking lineout which was overthrown.

Kolisi: "We are even more determined this week"

Siya Kolisi is confident the Springboks will deliver an improved performance against the Wallabies in their Castle Lager Rugby Championship showdown in Brisbane on Saturday as they keep their eyes firmly fixed on defending their title this season.

The Springbok Sevens team must focus on their own standards and efforts and not worry about the team lined up on the other side of the pitch when they run out at BC Place in Vancouver on Saturday, to start their 2021 HSBC World Rugby Sevens Series campaign.

The Vodacom Bulls will be jetting out on Saturday to begin a four-week tour that will start in Ireland, continue to Wales and end in Scotland for their opening fixtures of the Vodacom United Rugby Championship.

Sharks name squad of 34 for URC trip to Europe

The Cell C Sharks depart for the first month’s Vodacom United Rugby Championship action with a 34-man squad to play in four successive matches in Ireland, Scotland and Wales beginning next Saturday.

SA Rugby announced on Friday that Dove Men+Care, the official male grooming partner of the Springboks and SA Rugby, had returned as a partner to the national governing body for the next year.

Boks to reset mentally with All Blacks looming

Handré Pollard admitted that while the Springboks were bitterly disappointed following their 30-17 defeat against the Australia on Saturday it was important to reset mentally as soon as possible as they prepare to face New Zealand next week.

The Springbok Sevens team will play Spain in the Cup quarter-finals of the HSBC Canada Sevens in BC Place in Vancouver on Sunday evening after they topped Pool A with a clean sweep of results on day one of the tournament.

The Blitzboks claimed a second HSBC Canada Sevens tournament win three years when they totally outplayed Kenya to the tune of 38-5 in the final at BC Place in Vancouver on Sunday. South Africa were up 24-0 at the break and continued their dominance in the second half.

Springbok Sevens coach Neil Powell praised and thanked the Blitzboks squad after a very successful HSBC Canada Sevens tournament in Vancouver, where the South Africans claimed the title in commanding fashion after beating Kenya 38-5 in the final at BC Place early on Monday morning (SA time).

Kolisi: "We are even more determined this week"

Siya Kolisi is confident the Springboks will deliver an improved performance against the Wallabies in their Castle Lager Rugby Championship showdown in Brisbane on Saturday as they keep their eyes firmly fixed on defending their title this season.