Vermeulen missed the Castle Lager Lions Series as well as the Tests against Georgia and Argentina in the last two months on his road to recovery, but the powerful No 8 - who earned the Man of the Match award in the World Cup final and was named the SA Rugby Player of the Year in 2020 - is back in the thick of things at training and is expected to play a key role as the Boks attempt to defend their Castle Lager Rugby Championship title.

While he was positive on the road forward, Vermeulen admitted missing the opportunity to line up against the British & Irish Lions in the Springbok jersey was a disappointment. He played twice againt the famous touring side in red jerseys in 2009, for DHL Western Province and the Emerging Springboks.

“It was tough missing out on the Castle Lager Lions Series,” said Vermeulen, who has 54 Test caps for South Africa.

“Playing against the British & Irish Lions was one last item on my bucket list that I missed out on. But fortunately, I was part of the squad and being on the field as a water boy had me pumped up.

“I’m now looking forward to running out there with the guys (in the Castle Lager Rugby Championship), training and putting in the hard yards with the squad.”

The powerhouse admitted that his ankle injury was worse than initially suspected, but that he was delighted to be able to contribute to the team during the historic series.

“My injury was a bit more severe than everyone thought,” said Vermeulen.

“I wanted to be back for the first Test against the British & Irish Lions, and I tried hard, but I spoke to Jacques (Nienaber, Springbok coach) and told him that I will drop the team if I play. I tried to get fit for the following games, but I wasn’t able to play. 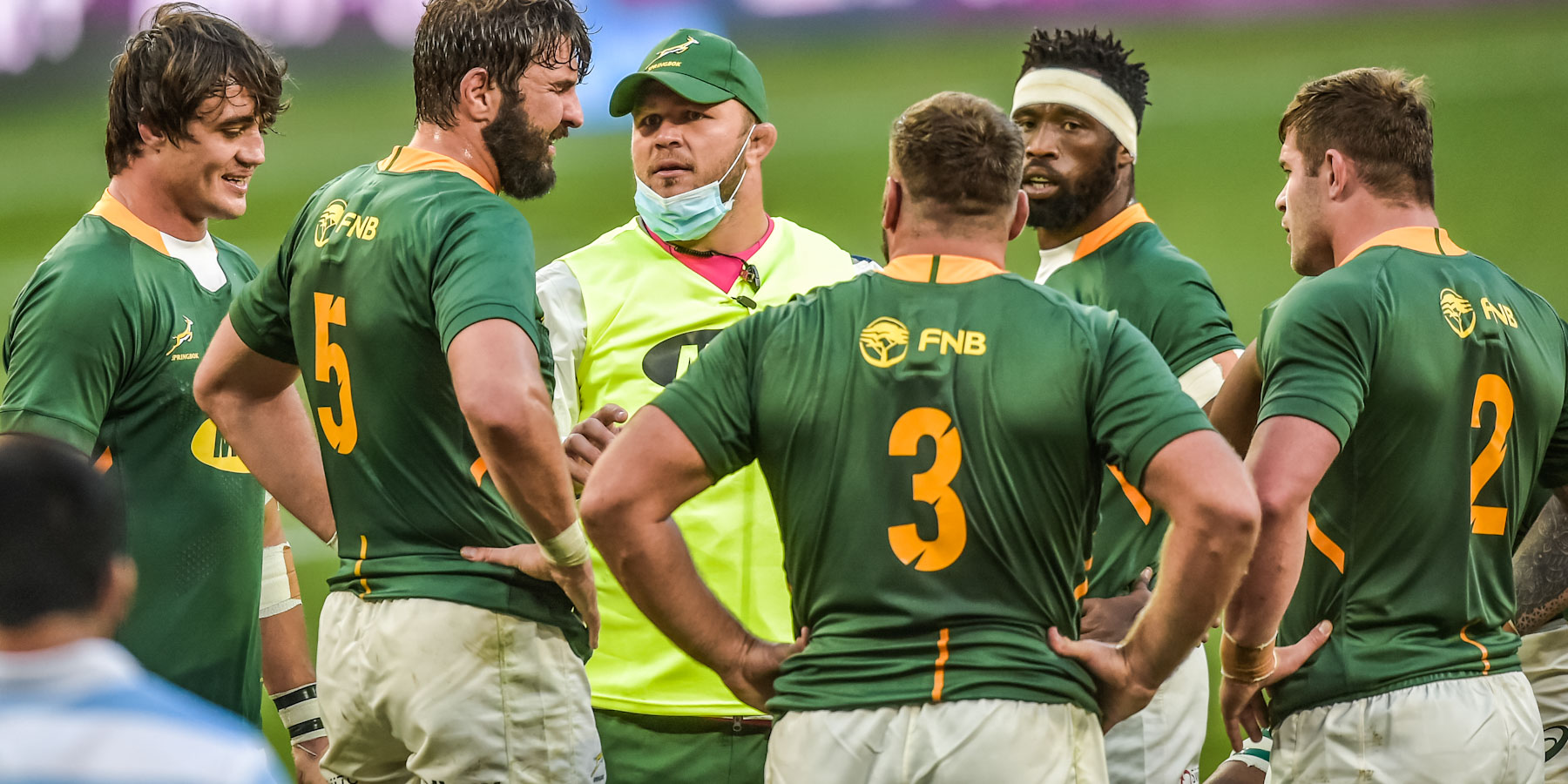 Duane Vermeulen played a slightly different role in the Tests against Argentina when he was one of the Boks' water carriers.

“That said, sitting on the sideline and running water allows one to get into the coaches’ heads and it offered me the opportunity to contribute by conveying those messages to the players, so that was a nice way to get back into the squad. And now I’m ready to go.”

When quizzed on the possibility of holding on for another Rugby World Cup appearance in 2023, Vermeulen said: “I’ll keep pushing as long as I can until I can’t keep up anymore.

“I told Jacques I’ll try my best, but if he sees that I can’t keep up, he must sit down with me and tell me it is time to move on.

“For now, I am still pushing hard and trying my best with my team-mates, and I’m giving my best for my country, and if that pushes me to another Rugby World Cup, then that’s fine with me.”

Vermeulen was encouraged with the strides made by the Springboks so far this season after missing out on international rugby since the World Cup final, but he said as with any team there was room for improvement.

“One can always improve,” said Vermeulen.

“We took small steps starting with the Georgia Test, then the SA ‘A’ side matches and the first Test against the British & Irish Lions.

“It was nice to see the guys getting continuity even though we slipped in the one Test (against the British & Irish Lions). From there on in we’ve been taking one step at a time in the right direction.

“We still have a lot to work on because of the time spent apart (due to the COVID-19 pandemic), but hopefully we are moving in the right direction.”

The popular HSBC Cape Town Sevens tournament, which was scheduled to take place from 10-12 December this year, has been called off due to ongoing challenges caused by the COVID-pandemic.

Damian Willemse is embracing his role as utility back in the Springbok team they brace themselves for a trying four weeks featuring back-to-back Tests against Australia and New Zealand in the Castle Lager Rugby Championship.

Teams are in for the Carling Currie Cup semi-finals

The teams are in and the players are ready for what promises to be a bumper Carling Currie Cup semi-final round, with all the play for in Pretoria and Durban.

A rampant Vodacom Bulls side marched into their second successive home Carling Currie Cup Final as they thumped DHL Western Province 48-31 at Loftus Versfeld in Pretoria on Friday evening.