DHL Western Province showed great character, skill and desire to secure a 35-24 bonus-point win over the Cell C Sharks in Durban on Saturday evening to sneak into the Carling Currie Cup semifinals.

The 13-all draw between Tafel Lager Griquas and the New Nation Pumas in Kimberley earlier in the day meant the Capetonians had a mountain to climb, having to secure a full-house or win by at least 24 points to snatch the fourth qualifying spot from the Lowvelders.

They came out firing as the expected rain stayed away, playing with great pace and intensity and scoring two tries in the opening quarter before the men in Black and White grew into the game and turned the tide.

However, DHL Western Province were not to be denied as they scored three second-half tries to upset the vaunted hosts in spectacular fashion.

As a result, they will face the table-topping Vodacom Bulls in Pretoria next weekend for a place in the decider, while the other semifinal will see the Cell C Sharks host Tafel Lager Griquas.

DHL Western Province got off to a good start, Champion of the Match Paul de Wet taking a quick tap from 5m out and passing to Dan du Plessis, who scored the first try. Tim Swiel’s conversion made it 7-0 after eight minutes.

Curwin Bosch put the hosts on the board with a penalty goal from bang in front four minutes later after the fullback had missed an early long kick at goal. Moments later, Du Plessis was in for his second, grubbering, running around Henco Venter and re-gathering to score in the right-hand corner, with Swiel slotting the conversion.

The Cell C Sharks responded with a fantastic try started by Sanele Nohamba, who flung a fantastic offload to Bosch who linked up with Phepsi Buthelezi, with the No 8 popping the ball to Yaw Penxe to dot down. Bosch nailed the conversion to make 14-10.

The chase for a bonus-point victory saw the visitors understandably turn down several kickable penalties, but irony struck when they decided to take the three points on offer as Swiel uncharacteristically missed the target.

The hosts hit the front in the 31st minute when Nohamba took a quick tap and offloaded to Buthelezi, with the ever-present Cell C Sharks captain scoring under the posts, making for an easy conversion for Bosch. The action remained fast and furious but the score stayed the same going into the break, the Cell C Sharks holding a slender 17-14 lead. 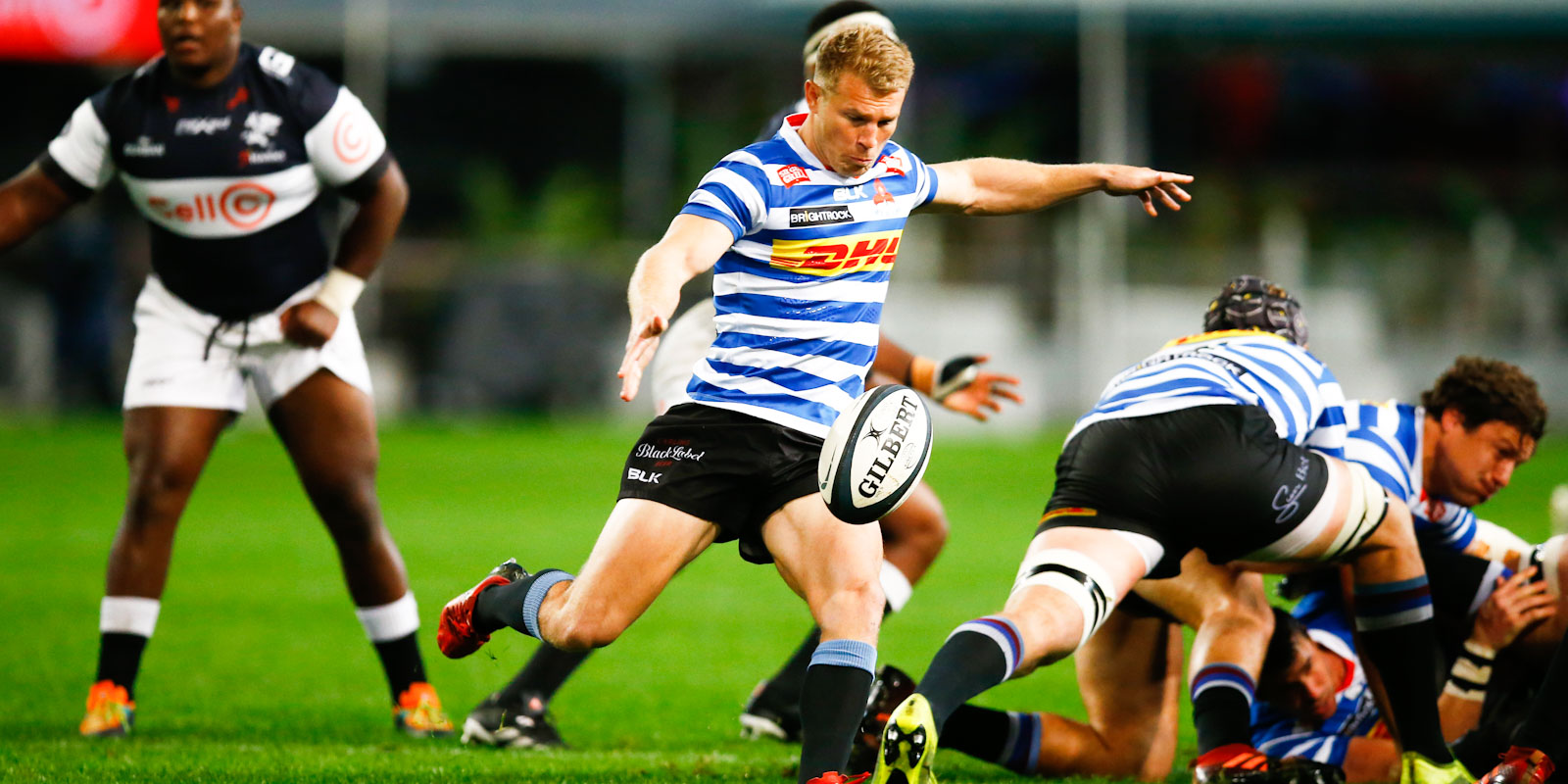 Paul de Wet was named Player of the Match.

DHL Western Province were good out of the gate again in the second half, De Wet - who was pivotal to the up-tempo offence of the men in the hooped jerseys - scoring a seven-pointer from close range. The impressive scrumhalf won a crucial breakdown penalty in his 22 later on to relieve the pressure as the Cell C Sharks built momentum.

As the game entered the final quarter, DHL Western Province set up a 5m lineout and went to their driving maul, but the Cell C Sharks were up to the task, forcing them into touch and clearing their line from there. The Durbanites came up short on their next trip into the 22 as well, opting for a scrum instead of the three points only to cough up possession.

A moment of magic from Lionel Cronje put the Cell C Sharks back in front in the 71st minute, the flyhalf chipping for Penxe to pounce and score his second. Bosch’s conversion made it 24-21, leaving DHL Western Province with nine minutes to score a fourth try and hang on for the win.

They only needed four as replacement hooker JJ Kotze stormed over for the most important try of the Capetonians’ campaign, and as the Cell C Sharks looked for a last-gasp try, Edwill van der Merwe snatched an intercept try to cap off a deserved win for the determined visitors.

SA teams start URC in Italy and Ireland next month

The Emirates Lions will be the first South African team in action in the newly founded United Rugby Championship when they take on Zebre in Parma on Friday, 24 September in Round One of this exciting venture, while DHL Stormers will play Benetton in Treviso the following day.