Springbok coach Jacques Nienaber was satisfied with the progress being made by the small group of players attending the opening week of their three-week conditioning camp in Bloemfontein and said they have been ticking the desired boxes.

Nienaber addressed the media on a virtual briefing on Wednesday and also gave feedback on the three players in the 46-man squad currently struggling with injuries, namely Duane Vermeulen, who injured his ankle last weekend on duty for the Vodacom Bulls, as well as the Munster duo of Damian de Allende and RG Snyman (burns).

Malcolm Marx, Kwagga Smith, Franco Mostert, Jesse Kriel, Frans Steyn, and Willie le Roux reported for duty on Sunday and have been putting in the hard yards on the field and at gym this week.

They will be joined by a big contingent of South African players on Sunday following the conclusion of the PRO14 Rainbow Cup SA pool games. The full squad will assemble on Sunday, 27 June, once the European-based players conclude their club commitments.

Following a 20-month absence from international rugby following the team’s 2019 Rugby World Cup victory, Nienaber was excited to be back in the national team environment and said: “It is great to be back on the field, to see the players and to coach again. The last time I was on the pitch with the Springboks was the Wednesday before the Rugby World Cup final.”

Nienaber said the coaching staff have been capitalising on the time with this small group of players by zoning in on the detailed aspects of the game. 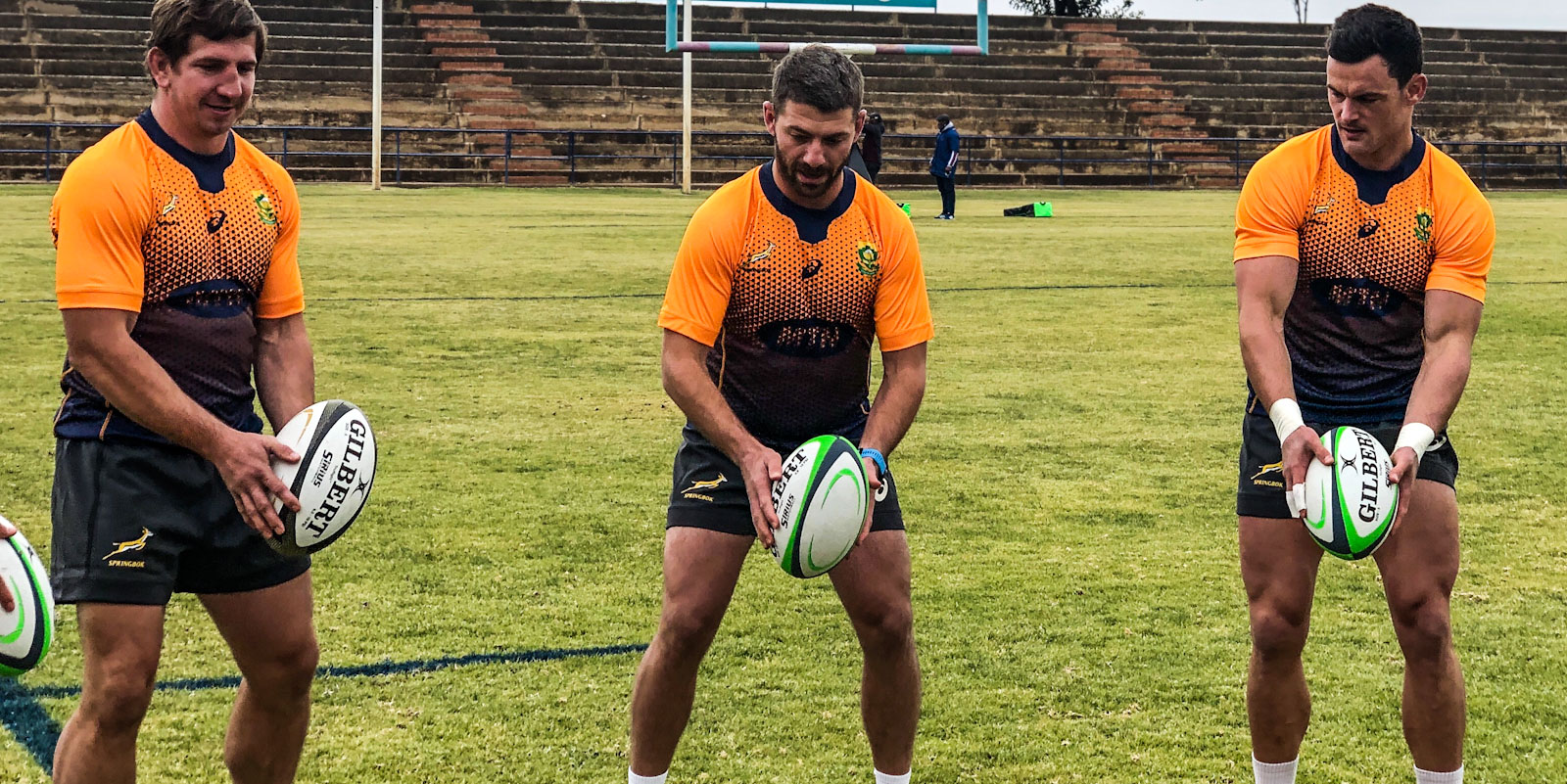 “As a national coach one doesn’t have much time to focus on the fundamentals, and that is something we are able to do with this small group of players,” he said.

“I was probably more nervous about this week than the others because we have to make sure that what we do at training is meaningful, so we have been doing a lot of skill-based work within the framework of our game plan and a little bit of conditioning as well.

“In the sessions we’ve had so far we have ticked the boxes we wanted to, and I am very satisfied with the first steps to get to our ultimate goal.”

On the injury front, Nienaber wished Vermeulen, De Allende and Snyman well as they embark on their road to recovery. All three were part of the Springboks’ Rugby World Cup-winning squad in Japan in 2019.

“Duane had surgery today, and hopefully the surgery and his rehabilitation goes well,” said Nienaber.

Of De Allende and Snyman he said: “I spoke to Damian and RG and they are fine and so are their families. They have superficial burns and having worked in a burn unit for three years as a physiotherapist, I know what road they will travel now.

“They are seeing the burn specialist on Friday and when they are cleared to travel and the necessary arrangements have been made, they will be able to get onto a plane and join us.”

The Springboks have been honoured with a special Presidential Award from the Black Management Forum.

Nic Berry (Australia), Ben O’Keeffe (New Zealand) and Mathieu Raynal (France) have been appointed to officiate the Tests between the Springboks and British & Irish Lions, and will be joined by five leading South African referees for the Castle Lager Lions Series, which kicks off early next month.

Springboks kick off preparations in Bloemfontein

An enthusiastic group of six Springbok players returned to training in Bloemfontein on Monday for the first time since the 2019 Rugby World Cup final as they kicked off their preparations for the Tests against Georgia and the Castle Lager Lions Series.

Springbok head coach Jacques Nienaber emphasised the importance of putting the necessary foundations in place and building momentum as quickly as possible as the national squad begins their preparations for their two Tests against Georgia and the Castle Lager Lions Series on Monday.

The race to the top of the standings in the PRO14 Rainbow Cup SA will go down to the wire in Durban next weekend when the Cell C Sharks and Vodacom Bulls clash in what is a mini-final for all effective purposes.

Vodacom Bulls Director of Rugby Jake White continues to test combinations and positions, with Ruan Nortje shifting to blindside flank opening up space for lock Janko Swanepoel to start in the engine room in their final PRO14 Rainbow Cup SA clash against the Cell C Sharks on Saturday.

Kriel: “The Lions are personal and special to me”

Springbok centre Jesse Kriel said being part of the Castle Lager Lions Series will mark an extra special occasion in his career as he follows in his great-grandfather’s footsteps by participating in one of the most significant rugby traditions in the game’s history.

The Cell C Sharks will welcome back a bunch of their top players for their last round PRO14 Rainbow Cup SA clash against the Vodacom Bulls in Durban on Saturday, which is in effect a final for local bragging rights.

In just over 30 days from now, the Springbok Sevens team – in the colours of Team South Africa – will start a long-haul flight to Japan, with the gold medal in Rugby Sevens at the 2021 Olympic Games in Tokyo their main aim.

The Springboks have been honoured with a special Presidential Award from the Black Management Forum.