The emotional Welsh hymn is the final piece of music Owens always plays before heading out to officiate in a major match, in this case France v Italy in the third round of the Autumn Nations Cup.

Already the world’s most-capped referee – he broke Jonathan Kaplan’s record of 70 appearances back in June 2016 – Owens becomes the first to reach three figures nearly 18 years after making his debut as the man in charge.

His longevity in the game is no coincidence. Years of hard work have gone into making himself the best he can be, whether he is refereeing Pencoed RFC U12s or the Rugby World Cup 2015 final, always applying the laws with a consistency, candour and humour that mark him out as someone special.

It has been quite a few weeks for Welshmen in rugby with Alun Wyn Jones becoming test rugby’s most-capped player and the first to 150 appearances and George North eclipsing Michael Hooper as the youngest player to 100 tests.

And while honoured by his own milestone, Owens says it was never anything he set out to achieve.

“It is very similar now with this 100. If I was to tell you I don’t really care about numbers, and if any referee was to tell you that, I don’t think they are being very honest with you because it is something special, something you can look back at.

“With the excellent quality of referees that are about now, very young ones as well, I think they’ll be quite a few of them in the years to come reaching the 100-cap milestone.”

Owens, who turns 50 in June, says his feelings towards the game are as strong now as they were back in February 2003 when taking charge of his first test, Portugal v Georgia in Lisbon.

“I still love the game as much as I have ever done, I still get as excited as when I did my first test match. The buzz is still there, I am still enjoying it and still loving every minute of it and hopefully I am still performing to the high standards that World Rugby expect of me and the high standards I set for myself,” he said in conversation with Sean Maloney on World Rugby’s Between the Lines podcast.

“I like the build-up to the games, the week before, when things start getting put out there in the Press. The game gets built up, and then you have comments from both sides, with the coaches having a little bit of a dig at each other. You are quite aware of how massive these games are and the huge expectation that comes with them,” he reveals.

“As you get closer to match-day the butterflies start to come into the stomach. I don’t really get nervous, more a nervous excitement of looking forward to the game rather than a nervousness of worrying about it.

“Then, going to the match on Saturday, seeing the crowd build up, the atmosphere of the stadium as you go out to warm-up, and then you go back to the changing room to prepare with your team.>

“I always have music on, I listen to the same songs, particularly the last song is always ‘Mor Fawr Wyt Ti’ before I go out on the field.

“You get your comms check and then you walk out of the changing rooms. I like to wait for the two teams to come out and I just look at them as they walk past and they look at me and quite a few of them say, ‘Good luck Nigel, good luck ref’ and I say, ‘Good luck to you’. I always like that moment. 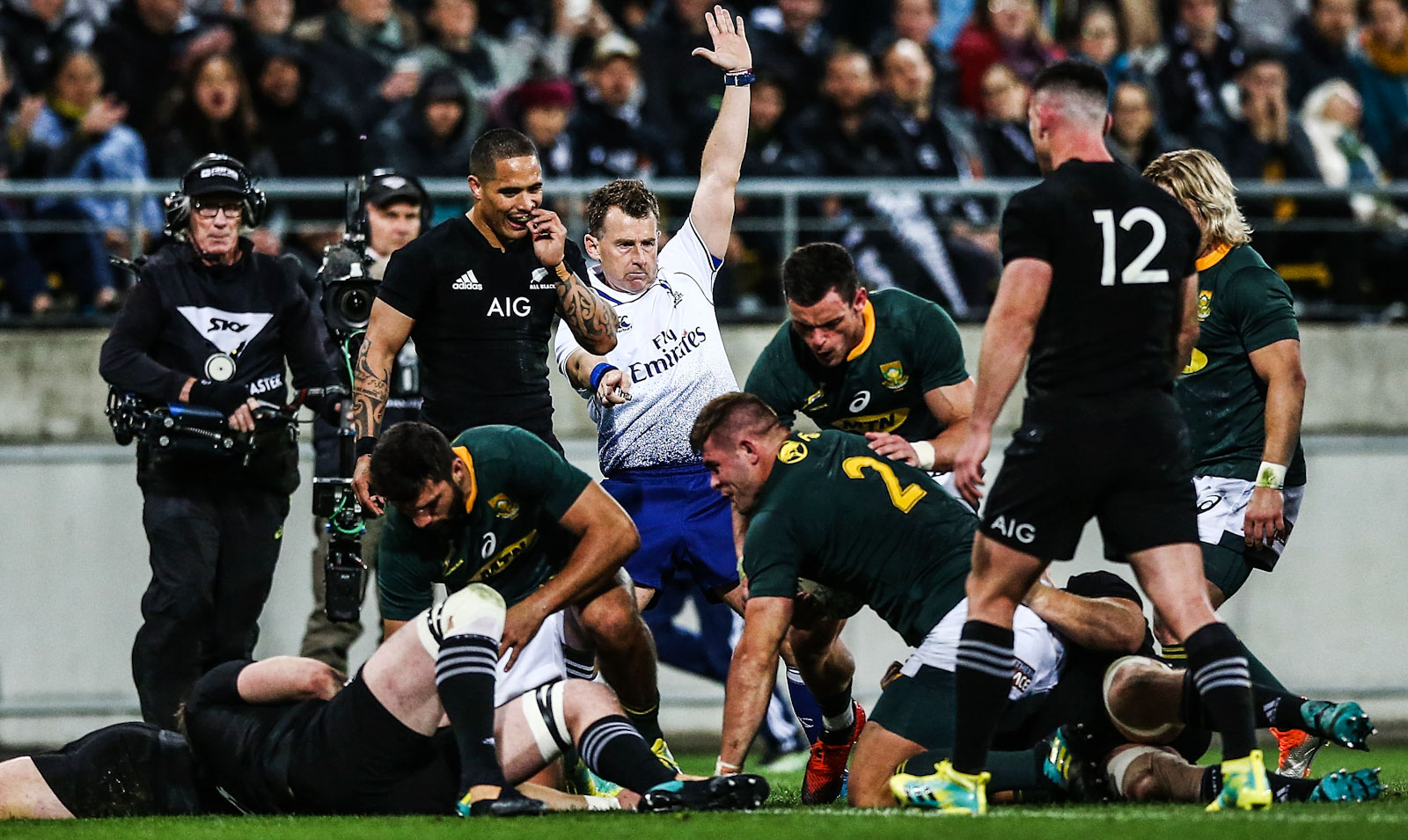 Nigel Owens awards a try to the Springboks during their 36-34 win over New Zealand in Wellington in 2018.

“From that moment on, going out, lining up for the anthems, and then that 30-40 seconds before the actual whistle, to me that is the sort of four to five minutes where it really does hit home, ‘Here we go’.

“I am pretty laid back, nothing fazes me much really but when that whistle goes, bang you’re in the zone and nothing else matters. Until that moment you appreciate the atmosphere, you hear the crowd, you see the players and the little things that they do, you see the Haka and you see the stare back at the Haka from the opposition, and you take all of that in. But once that whistle goes, that’s all gone, and you just focus on what you have got to do.

“Of course, I enjoy those 80 minutes, I love it. But you probably don’t realise you enjoy it because you are focusing so much.

“I am sure players will tell you how special it is representing their country and lining up for the anthems and the kick-off, and it is the same for the referee, it is something really very, very special.”

Owens won wide acclaim for his handling of the Rugby World Cup 2015 final. It’s one of the games he looks back on most fondly.

“World Cup finals are the pinnacle of your career as a player and as a referee and, of all the World Cups, that’s probably the best final there’s ever been,” he says.

“Finals so often disappoint, at World Cups in particular, but in that game in 2015 New Zealand were just at their best. Australia played brilliantly and came back into the game and it was in the balance but then New Zealand took it away from them again in the last 10 minutes or so.”

Owens put himself through a punishing training regime and match schedule in 2019 to make it to a fourth Rugby World Cup in Japan, the country where he refereed in as far back as 2005.

Retirement was on the agenda post-tournament but with the enjoyment and the fitness still there, and words of encouragement from those around him, Owens decided to give himself a chance of making the century.

“I am told I performed very well and refereed the semi-final between New Zealand and England which turned out to be one of if not the best games of the World Cup for the spectators. Obviously, the players have to take the credit for that,” he said.

“I was just loving it and couldn’t find it in me to say, that’s it, I’m done.

“And you had people telling you that you’re only a few games away from the 100, it was three at that time, and players saying to me, ‘Maybe we’ll see you in four years’ time, Nigel?’. I said, ‘Oh no, this could be it for me’, and they said, ‘Why are you finishing?’. And I thought, ‘Yeah, why?’. So that’s why I am still here.”

Being true to yourself

While Owens’ achievements ensure his status as one of international rugby’s standout referees, for the best part of a decade he never wanted to be seen as different, he never wanted to be gay. But the Welshman came to terms with his sexuality following a near-fatal suicide attempt and could never be just part of the crowd if he tried.

His wise-cracking one-liners are legendary. Moments like his comment, ‘I’m straighter than that one’, to Harlequins hooker Dave Ward after a particularly bad throw, went viral on social media.

“Contrary to what people think or may tell you, I certainly don’t go out onto the field having prepared one-liners or to try and be funny. I never have and I never will. I’d like to think anything I’ve ever said has been respectful,” he insists.

“Dave Ward thanked me after the game for that comment because he was so embarrassed at the time and he said it made him laugh and helped him to move on from it.

“I spent about nine to 10 years of my life pretending to be someone I wasn’t and that nearly cost me my life. From that day on, when I had that second chance, I’ve always said to myself, ‘Just be yourself’.

“I’d like to think that I have contributed something to the game over the years and if I have, then I am really glad, because believe me, I owe more to rugby and the people in the sport, than rugby will ever owe to me. If it wasn’t for the great sport rugby is, I wouldn’t be able to be who I am today. Rugby saved my life.”

Zak Burger will make his Carling Currie Cup debut as captain for Tafel Lager Griquas on Saturday when he will lead the Kimberley side onto the field in their opening match against Xerox Lions.

Grobbelaar back for Vodacom Bulls' trip to CT

Johan Grobbelaar makes a return to the Vodacom Bulls pack and will start at hooker for their opening Carling Currie Cup clash against DHL Western Province at DHL Newlands on Saturday.

Phakisa Pumas coach Jimmy Stonehouse made six changes to his starting team for their opening Carling Currie Cup match against the Cell C Sharks in Durban on Friday.

Springbok captain Siya Kolisi is back from injury and will lead DHL Western Province in their opening Carling Currie Cup match against the Vodacom Bulls in Cape Town on Saturday.