The visiting Lions, who trailed 17-13 at the break, took the lead just a minute before play was halted although the home side were on the attack, and the match officer’s safety call came at the most unfortunate time for the Tafel Lager Park outfit.

The Kimberley outfit must be cursing their luck, as they looked set for victory 30 minutes into the first half, with three unanswered tries setting them on their way. The visitors responded decisively though with two late first-half tries and another one just after the restart.

However, the losing bonus point will be scant reward for plucky Tafel Lager Griquas outfit. They started brightest and flyhalf Tinus de Beer missed an early penalty as strong winds pounded the goal kickers all afternoon.

The Joburg outfit played with the wind at their backs in the first half but were slow out of the blocks. 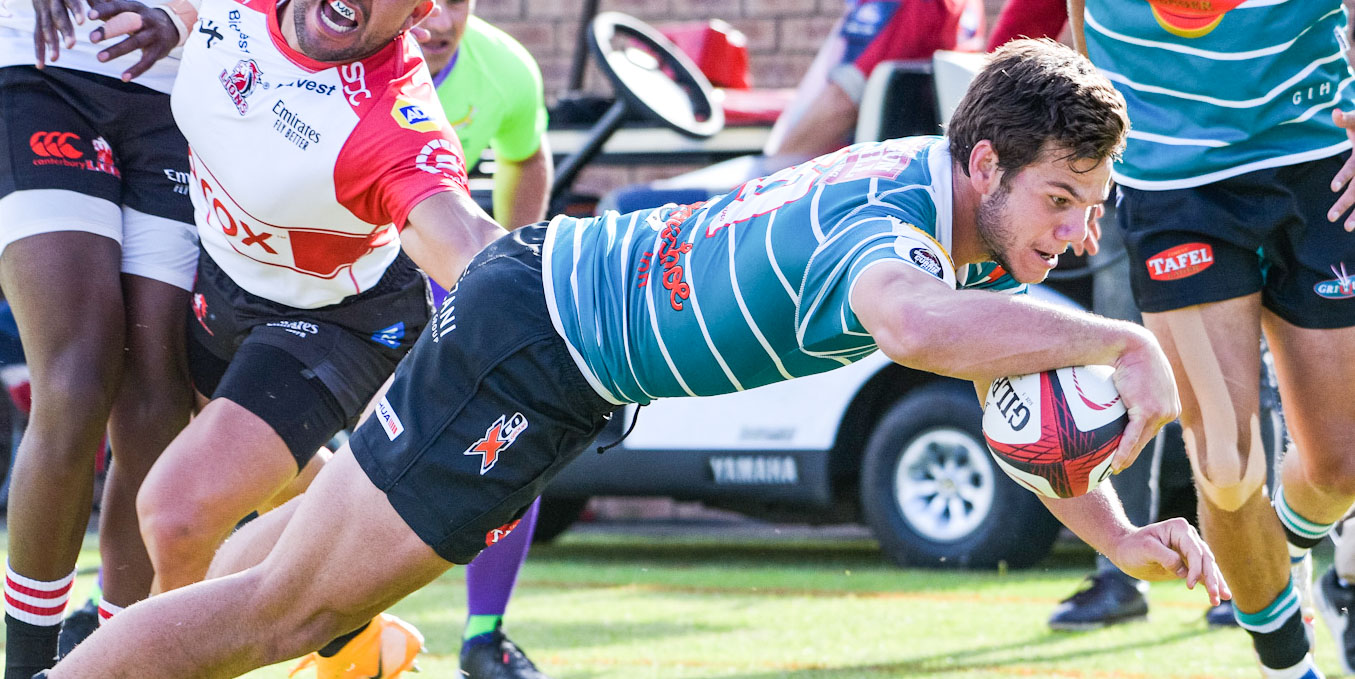 Eduan Keyter getting his try.

The home team hooker, HJ Luus, got the scoreboard ticking with a well-worked try from an attacking line-out. Early discipline problems hampered the Lions as Griquas applied the pressure at the breakdown in particular and Luus was driven over after eight minutes.

The visitors had a similar opportunity soon after restart, but lost the ball on attack near the try line.

The next quarter was fought with no real advantage gained but then hosts struck twice. When provided with an attacking opportunity, lively scrumhalf and captain, Zak Burger, sniped around a ruck and from the quick ball created by his break winger Eduan Keyter stepped inside his man to score in the corner.

De Beer’s conversion kick could again not beat the wind, but the 10-0 lead was good value for money. Elton Jantjies, the visiting fly half,  then kicked a penalty goal just before the half hour mark to settle down his side.

The home side struck back immediately with a third try. From the kick-off, they managed to get the ball back into their hands and attacked handsomely. Keyter had a strong burst and a number of quick rucks later, James Verity Amm ran a great line to score. It was the fullback's first Carling Currie Cup try and what a gem. De Beer slotted the conversion from right in front. 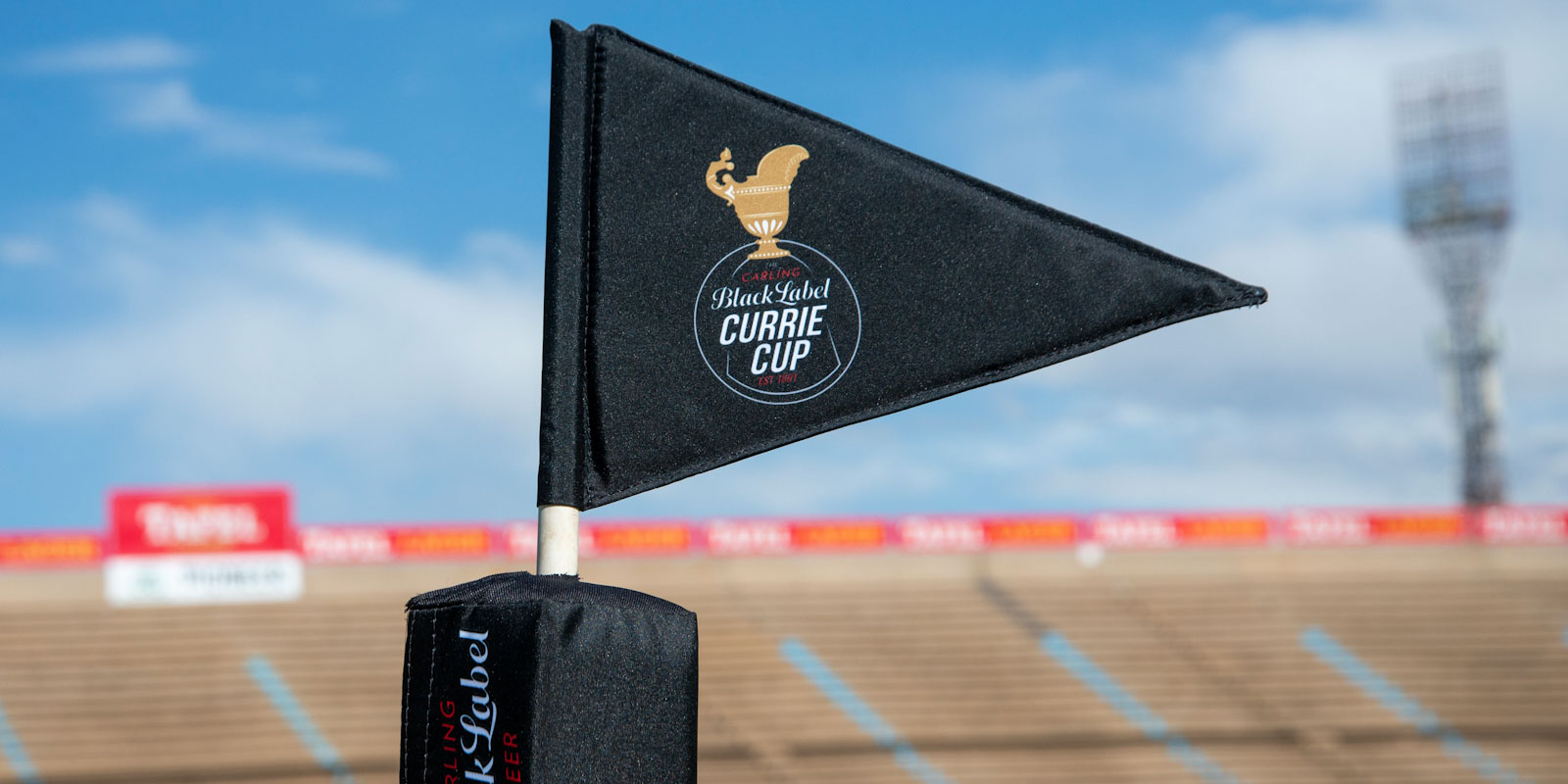 The visitors lost fullback, EW Viljoen, to an injury and he was replaced by Tiaan Swanepoel. The replacement fullback’s first act was a good one, delivering a scoring pass to wing Courtnall Skosan in the 37th minute, with the former Bok winger diving over in the corner. Jantjies also found the wind too strong and he failed with his conversion kick.

With their tails up, the visitors kept on attacking and three penalties after the halftime hooter, their attacking endeavours were rewarded when Skosan again found a gap to score in the same corner. Jantjies learned from his first effort, but this time around, it struck the upright to hand the home side a 17-13 lead at the break.

The second half started with the bang, reminiscent of the thunder storm that was fast approaching. The home side fumbled the restart and got penalized for holding on, back-chatted referee Marius van der Westhuizen, who duly advanced the penalty another then meters.

The visitors elected a scrum and from that strong position a number of attacks were launched. The home defence held, but they conceded a number of penalties in their red zone and when they buckled in the scrum, a penalty try was awarded. This handed the Xerox Golden Lions a crucial 20-17 lead just four minutes into the half.

From the restart and a few phases later, the lightning forced the players off the field with the home side on attack and looking to snatch back the lead.

*Law 5.10: The referee has the power to end or suspend the match at any time if the referee believes that it would be unsafe to continue.

Ulster will face a tough test in the Guinness PRO14 on Monday as they travel to Edinburgh for a repeat of last year’s semi-final, marking one of the big matchups in round eight of the competition.

The Cell C Sharks overpowered the Phakisa Pumas 45-10 in the opening Carling Currie Cup match of the 2020 tournament on Friday evening in Durban, scoring seven tries to one to temporarily move to the top of the log courtesy of their comfortable bonus-point win.