The Castle Lager Springbok Showdown presented the national coaching staff with a much-needed opportunity to work with an extended group of players which saw some of the country’s brightest young talent rub shoulders with experienced Rugby World Cup winners.

Saturday’s match at DHL Newlands ended in a comprehensive 25-9 win for the Siya Kolisi-led Green team over the Gold side, under the captaincy of Lukhanyo Am, in what was only the second weekend of match action for the local players since the COVID-19 pandemic disrupted the South African rugby season in mid-March.

Springbok coach Jacques Nienaber said the exercise of giving some of the country’s brightest prospects the chance to work with the Springbok coaches, and to learn from experienced RWC winning Springboks, was a splendid concept with lots of benefits for the future.

“A number of players in this game came into the Springbok set-up as rookies earlier in their careers – guys such as Siya Kolisi, Frans Steyn and Elton Jantjies, to name a few – and they have mentioned the positive effect working with experienced players as youngsters had on their rugby careers,” said Nienaber. 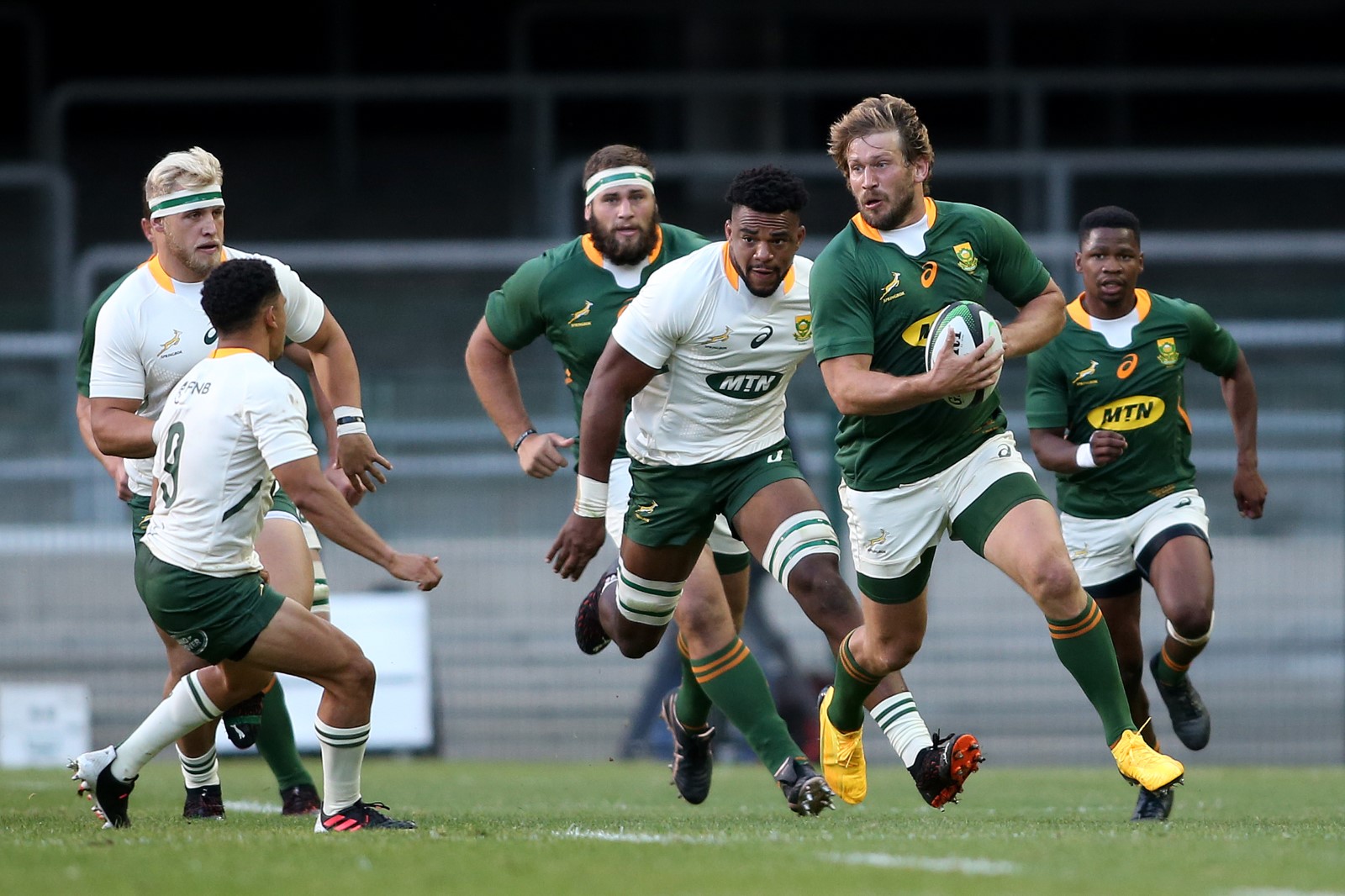 “The young ones and new players in both camps brought a lot of energy and enthusiasm into the mix because they were super excited to be involved and to learn and absorb whatever was happening around them. So, from that point of view it was definitely a very worthwhile exercise.

“Now they have a real taste of what the Bok environment looks and feels like. Although the match was not a spectacle, I think especially the young ones will look back with lots of good memories and we hope they return to their franchise teams eager to implement what they’ve learn.”

Apart from participating in the training and technical sessions, players in both squads who were not yet exposed to the international environment were able to mix with experienced Springboks such as Siya Kolisi, Duane Vermeulen, Bongi Mbonambi, Steven Kitshoff, Frans Steyn and Lukhanyo Am.

“One of the other big benefits of the week was to see our current Springboks sharing their experience and knowledge of the successful RWC campaign,” said Nienaber.

“Looking back at the game preparations and the match itself, I think we will definitely reap some rewards in the future. 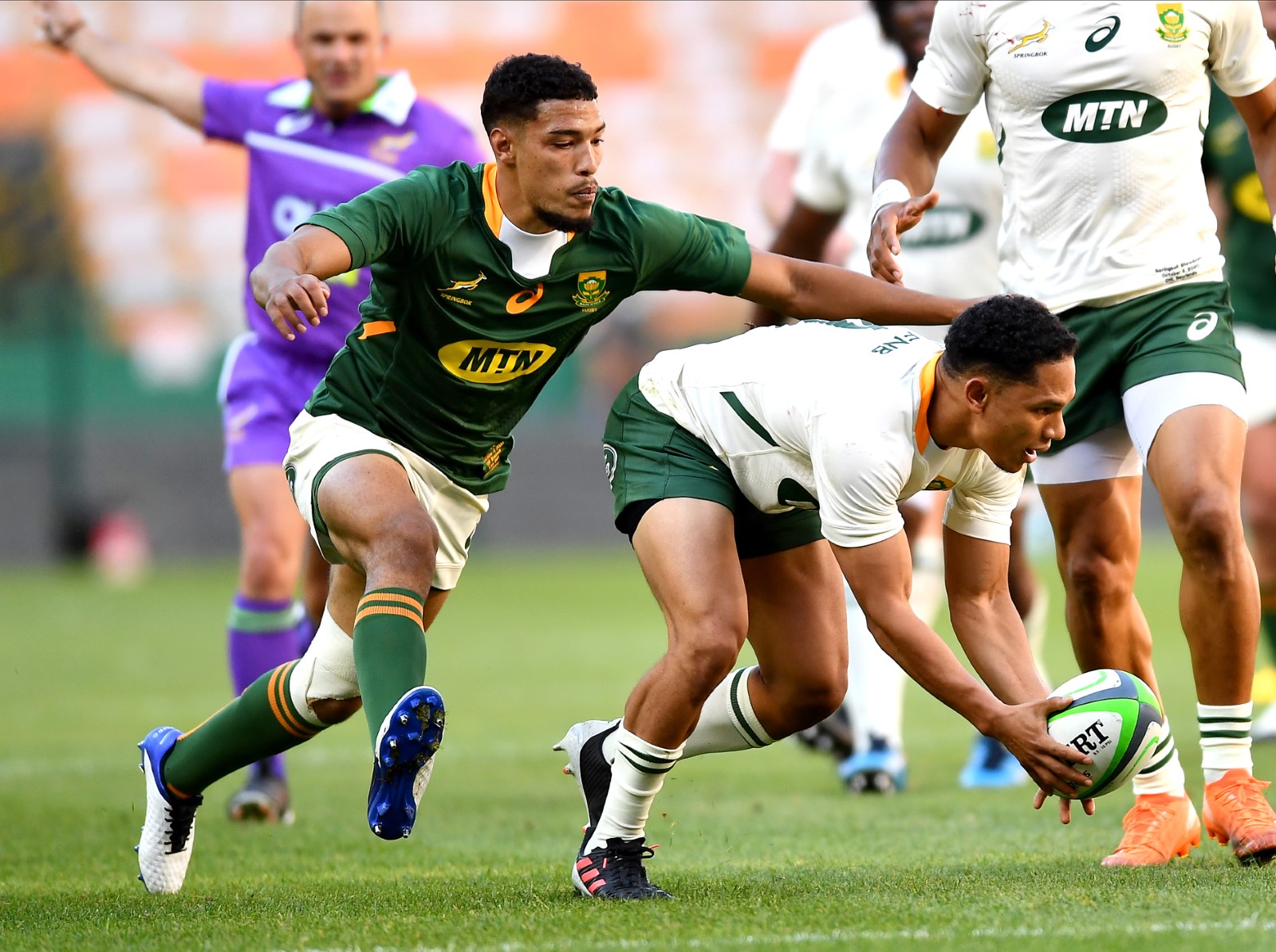 “It was obviously very good to have the local players back in a Bok environment after such long layoff because of the pandemic. The main objective was to put players under pressure so we can see how they perform in Test-match like conditions.”

The players from the two squads returned back to their franchises on Sunday in preparation for Vodacom Super Rugby Unlocked, which starts on Friday.

The campaign sees the Vodacom Bulls, DHL Stormers, Emirates Lions and Cell C Sharks joined by the Toyota Cheetahs, Tafel Lager Griquas and the Phakisa Pumas with all 21 matches to be shown live on SuperSport.

The local competition will start at 19h00 on Friday, 9 October when the Cell C Sharks take on the Emirates Lions in Durban, and the following day the Toyota Cheetahs and Vodacom Bulls will host the Phakisa Pumas (at 16h30), and Tafel Lager Griquas (19h00) respectively.

The DHL Stormers have a bye in the opening round, but they will host the Emirates Lions the following week, when the men from Johannesburg will face the Capetonians at DHL Newlands on Saturday 17 October at 19h00.

Springbok Green turned on Test-style rugby to come away with a 25-9 victory and bragging rights over Springbok Gold in the Castle Lager Springbok Showdown as South African rugby took another step back to full competitive play with a second, post lockdown run out.

Libbok and Kok to start for Cell C Sharks in Durban

New acquisitions Manie Libbok and Werner Kok were named in the Cell C Sharks’ starting team for the opening encounter of Vodacom Super Rugby Unlocked, when the Durbanites host the Emirates Lions at Jonsson Kings Park on Friday evening.

Springbok Rugby World Cup winners Tendai “Beast” Mtawarira and Malcolm Marx caused quite a stir on Wednesday morning when they surprised learners of St John’s College in Johannesburg with a visit accompanied by the Webb Ellis Cup.

DHL Stormers head coach John Dobson has confirmed a 47-man squad for Vodacom Super Rugby Unlocked with the Capetonians' campaign kicking off next Saturday against the Emirates Lions at DHL Newlands.