The Green side held a slender 6-3 lead at the break, but two tries and a penalty try in the second half of a match – that delivered typical South African physicality mixed in with some rustiness – proved the difference.

<< PHOTO GALLERY FROM THE MATCH >>

In the end, Kolisi's men made better use of their opportunities, while the Gold side – captained by Lukhanyo Am – spurred a number of chances to keep the score board ticking over. They missed four kicks at goal, which not only robbed them of score board pressure, but also territorial advantage.

The Gold side enjoyed some early dominance and territorial advantage and Rosko Specman (wing) was forced into touch only meters from the Green try-line in some of the early exchanges. 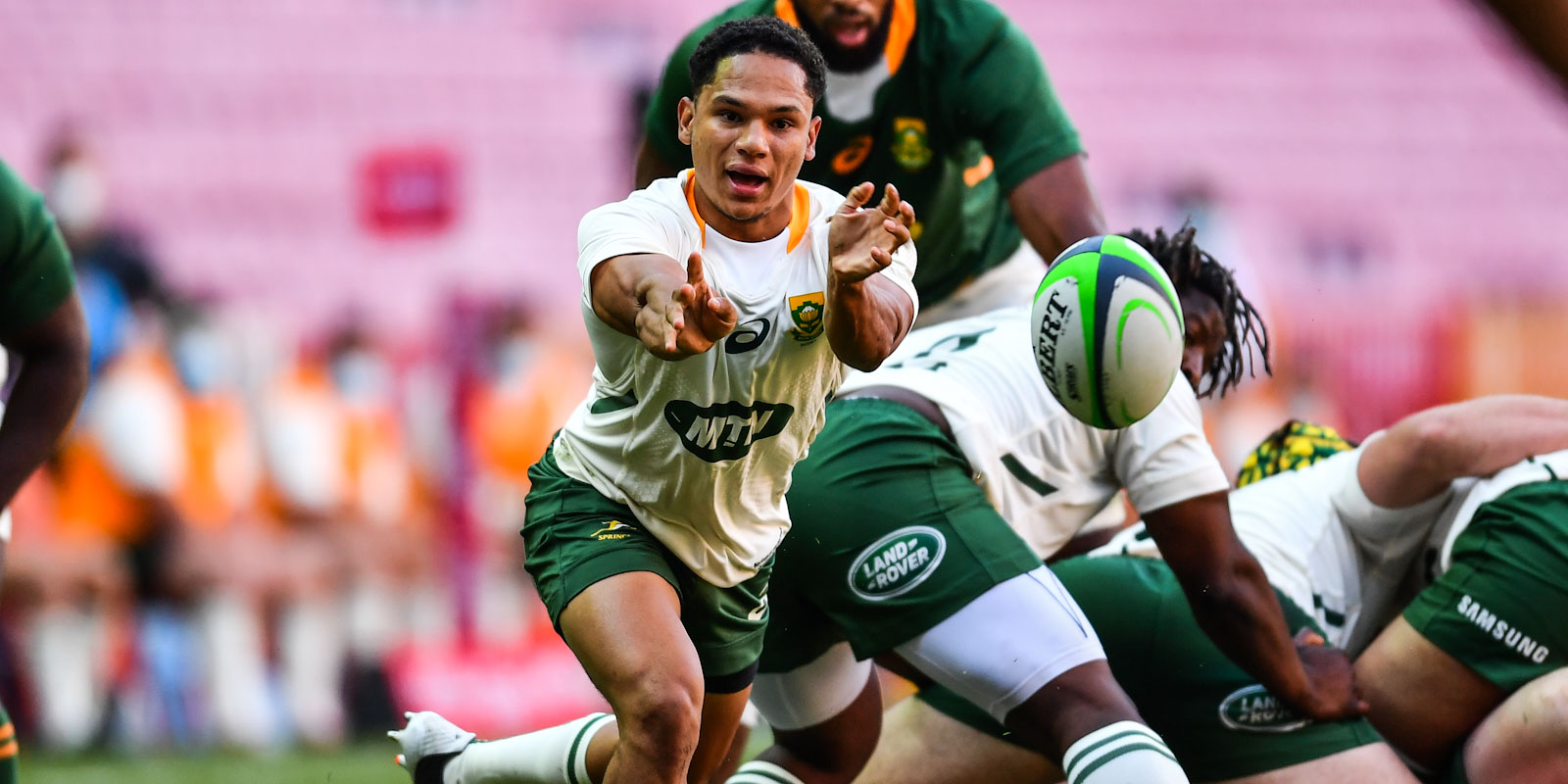 Herschel Jantjies gets the ball away for the Gold team.

That manifested in another opportunity with Damian Willemse taking a shot at goal after eight minutes, but he pulled a 40m effort to the left.

The Green team created their first scoring opportunity via a solid scrum 15 minutes after experienced referee Jaco Peyper called the teams to action. Elton Jantjies had little trouble with his 30m effort to edge his side ahead by 3-0.

The Springbok flyhalf extended that lead six minutes later when the Gold backline was ruled offside to hand his team a 6-0 lead after the first quarter of the match.

As could be expected after a long lay-off and the limited time the squads had together, there were some rusty moments and the odd misfiring lineout in the opening half hour of play. 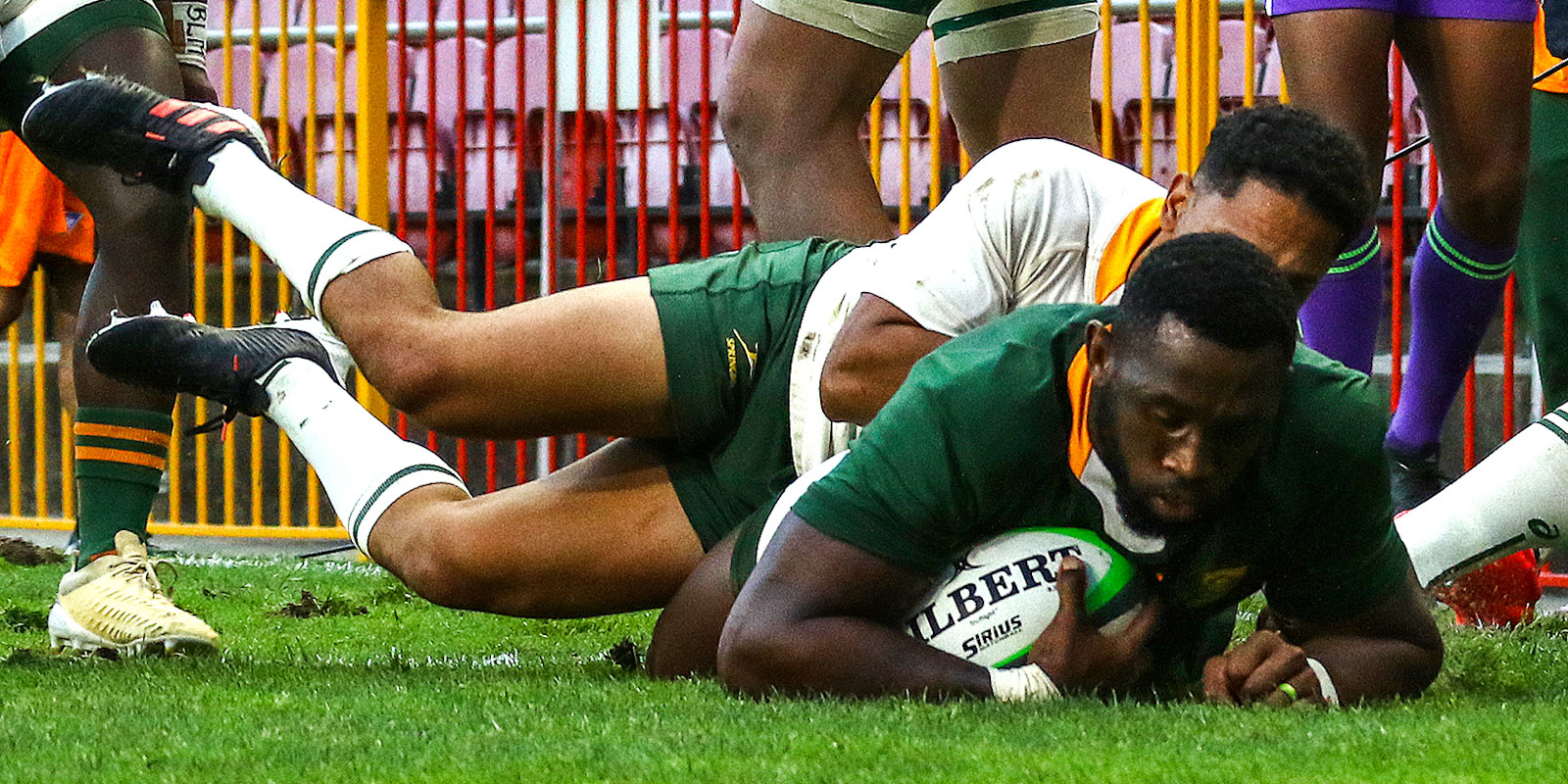 Siya Kolisi crosses for his try for the Green team.

The Gold scrum handed Jantjies a third shot at goal when Steven Kitshoff was pinged by Peyper. His effort from 47m out just dropped short.

Kitshoff redeemed himself at the next scrum when he forced a penalty, but another fluffed line-out by Gold thwarted the attacking line-out option he brought about. It did create territorial pressure though and when the Green side was ruled offside, Willemse kicked a 30m penalty to cut the lead in half after 33 minutes.

Kitshoff's presence in the game was growing and he forced another scrum penalty just before the break, but Willemse pulled his effort to the left with another scoring opportunity missed.

Willemse got another shot two minutes later when the Green backline was ruled offside, but this time pushed it to the right, leaving the 6-3 score-line intact at the break.

The second half started pretty much the same way as the first, with the Gold side showing intent and promise. They forced an attacking lineout two minutes in, but a timely intercept by Elton Jantjies thwarted their effort.

Steven Kitshoff on the charge for the Gold team.

Willemse, bloodied earlier in the match in a tackle on Frans Steyn, then pulled back Yaw Penxe when the Green winger kicked a ball ahead in a try-scoring position.

Green was awarded a penalty try and Willemse a yellow card and suddenly Stick's charges jumped to a 13-3 lead.

Curwin Bosch, for Gold, missed a long-range effort shortly after he took to the field in yet another missed opportunity for Davids's troops.

Bosch got a second opportunity after Carlu Sadie forced a scrum penalty shortly after taking the field and after 55 minutes the lead was back to seven points.

Green struck back immediately when they scored from an attacking lineout, with Kolisi spinning around from the back of the maul to score a vital try. Jantjies hit the cross bar with his conversion attempt to leave his team 12 points ahead after an hour of play.

Both coaches emptied their bench in the last quarter of the match which upset both teams’ rhythm, but Bosch kicked his second penalty goal with ten minutes to go as the Gold side desperately tried to close the lead.

It wasn’t to be as former World Rugby U20 Player of the Year, Juarno Augustus, sealed the deal with a try for the Green side with seven left on the clock.

Kade Wolhuter kicked an up and under and the ball bounced off a head and a knee before Augustus was presented with one of his most unlikely tries yet. Wolhuter, in place of Elton Jantjies, kicked a tight conversion to extend the lead to 25-9.

There may not be any serious silverware at stake in the Castle Lager Springbok Showdown in Cape Town on Saturday, but for the captains of the Springbok Green and Gold squads, Siya Kolisi and Lukhanyo Am, winning will be front of mind when they lead their teams out at DHL Newlands at 17h05.

Notshe elated to be back in Green … albeit in Gold

Sikhumbuzo Notshe’s rugby career is enjoying a new lease of life since his move to from Cape Town to the tropical surroundings of Durban on the South African east coast.

Emirates Airline Park has played host to some epic encounters and on Sunday, the famous stadium in Doornfontein will provide another fascinating peak into the future of South African rugby when the 2020 SA Rugby Under-21 Championship kicks off in Johannesburg.

World Rugby and the France 2023 Organising Committee have announced that the Palais Brongniart in Paris will host the Rugby World Cup 2023 Draw. The Draw will be pushed back from the previously announced date by two weeks to 14 December 2020 owing to the ongoing impact of the Covid-19 pandemic on rugby and event hosting activities.

The Springbok Green team cut loose in the second half as they won the Castle Lager Springbok Showdown against their Gold counterparts by 25-9 on Saturday, 3 October. Catch the highlights here, courtesy of SuperSport.

Springbok loose forward Marcell Coetzee scored a crucial try for Ulster to stave off a brave Benetton fight and give the Guinness PRO14 finalists an opening 35-24 win over the Italian side.