One of the significant features to come out of the Springboks’ Castle Lager Outgoing Tour this month – and the November international series in general – was how it underlined the role played by the Vodacom United Rugby Championship in breeding players for successful roles in their national teams.

Indeed, while Springbok coach Jacques Nienaber was initially criticised for ignoring home based players who’d made their names in the Vodacom URC, by the end of the calendar year that had changed, with several newcomers who either first captured the eye in the 16-team cross-hemisphere competition or grew their game there, making an indelible mark.

Understandably, the 2021/22 finalists, the eventual champions DHL Stormers and the Vodacom Bulls, led the way when it came to providing breakout opportunities for players within their system.

Kurt-Lee Arendse, who scored the thrilling try that had Twickenham aghast and even England supporters marvelling at his pace and skill, was one such player.

Arendse made his debut for the Boks in the second Test against Wales in Bloemfontein in July, but it was after France-based Cheslin Kolbe was injured in the third and deciding game against the Welsh that Arendse got his chance to show that he could transfer his sublime form for the Bulls in the Vodacom URC onto the international stage.

He turned in a stellar performance in his first outing against the All Blacks in Nelspruit in August, with his pace and his mastery in the air being a constant thorn to the New Zealanders and he capped it with the opening try of the game.

Unfortunately, Arendse blotted his copybook when red carded following an unfortunate clash with an airborne Beauden Barrett and the injury sustained in that incident, plus the subsequent suspension, prevented him from playing for much of the rest of the Boks’ Castle Lager Rugby Championship campaign.

He did return though for the final game against Argentina in Durban as a replacement and in no time at all after he came on, Arendse scored one of his trademark tries, running it in from near the Pumas 10 metre line, off the last move of the game.

The Boks didn’t hit target in that game, and ended second in the Rugby Championship, but Arendse’s star shone, as it did again on the end of season tour.

Arendse was a big contributor to the great Bok counter-attacking that appeared to stun the French in Marseille, his opening try and then the follow up to complete the brace was a talking point when Italy were laid to the sword in Genoa, and then came the Twickenham highlight to the tour.

Arendse is being talked about as a special player, and it was in the Vodacom URC that he first got experience of playing against overseas players and overseas conditions.

Ditto his young Vodacom Bulls team-mate Canan Moodie, who made his Test debut at the age of just 19 as Arendse’s replacement during the international season. His excellent try, plucking a kick out of the air and then running 30 metres to score, was the turning point in the Boks’ favour against the Wallabies in Sydney and will be part of any end of year highlights package.

Canan Moodie races away for his brilliant try against the Wallabies in Sydney.

Moodie started the 2022 calendar year playing Currie Cup rugby for the Bulls, and made a big statement in his debut against DHL Western Province before quickly being elevated into the Vodacom URC team, where his potential was picked up by the national coaches.

Elrigh Louw was another Bulls player who has used the Vodacom URC as a platform to bid for national honours, and he played in the competition in its previous guise as the PRO14 when he was at the Southern Kings.

That was where Louw was first spotted by South Africa’s Director of Rugby Rassie Erasmus, probably on the recommendation of the then Kings DOR Robbie Kempson.

With only the one cap earned in the second Test against Wales to his credit before the tour, Roos played off the bench in the destruction of Italy before transferring his Vodacom URC form to the international stage in London a week later. In that game, fellow DHL Stormers player Marvin Orie also showed he belongs at international level.

Although Orie had played for the Boks before, and was first capped while still at the Emirates Lions, this was his breakout year at international and he confirmed it at Twickenham, where no doubt his experience of being part of the winning Stormers effort in the Vodacom URC final helped his confidence. 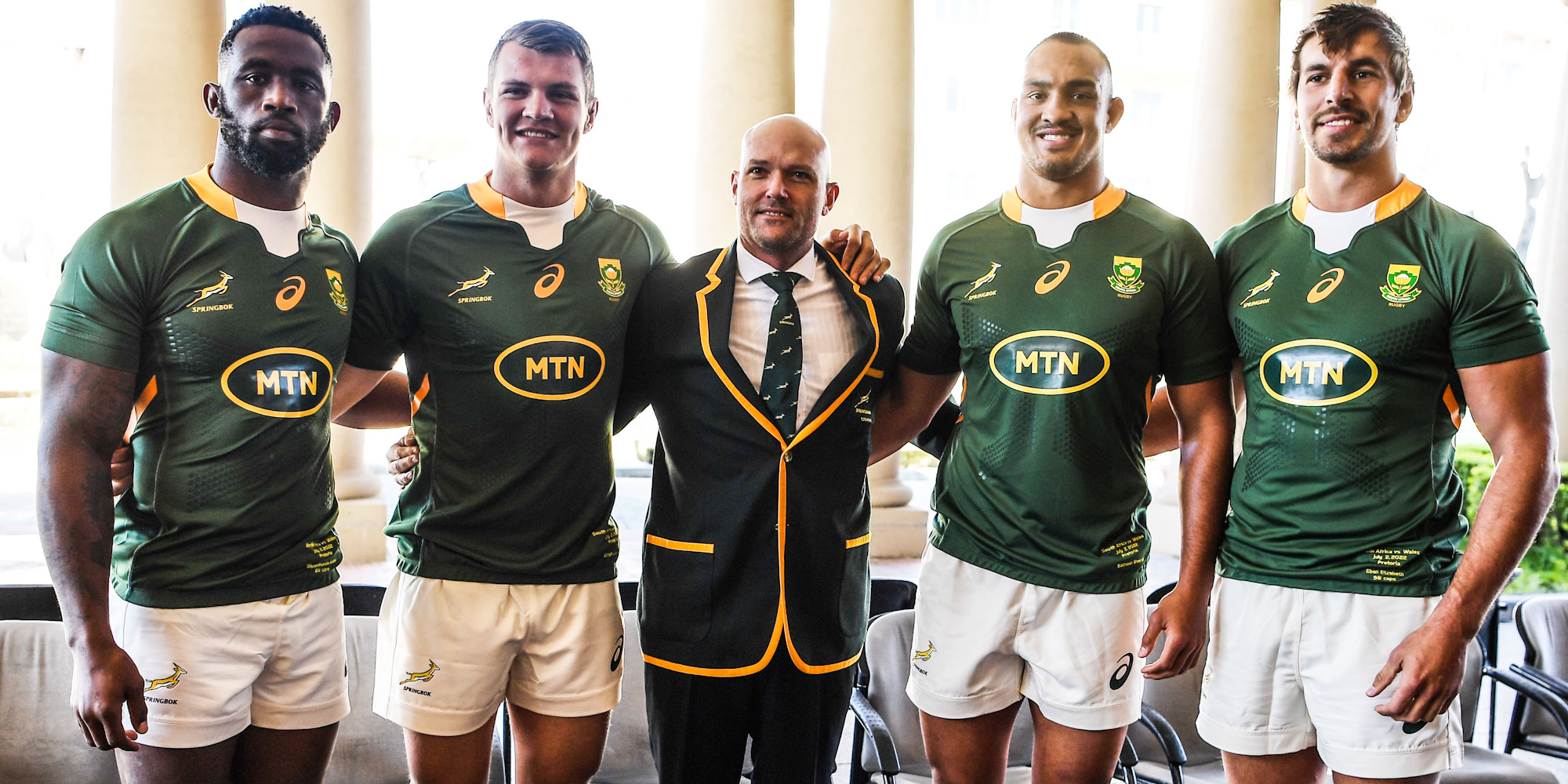 Elrigh Louw and Salmaan Moerat made their Test debuts this year.

His Stormers teammate Salmaan Moerat would have added more Bok appearances in 2022 were he not playing behind arguably the world’s finest lock, Eben Etzebeth, who will grace the Vodacom URC in the colours of the Cell C Sharks going forward.

Deon Fourie and Manie Libbok were two other DHL Stormers players who joined Roos and Moerat in making their Bok debuts this year, with Libbok looking the part as a replacement in Genoa.

Libbok is one of the Vodacom URC’s biggest success stories – not long ago he was struggling to establish himself in the starting teams of the Bulls and Sharks, but thanks to the platform given to him by the Stormers, he has grown into a genuine international quality player.

Which of course is exactly what Damian Willemse is now. The utility back had also played for the Boks before this year, and was with them as a replacement at the Rugby World Cup in Japan in 2019.

But it was off the back of his Vodacom URC form, and the experience of being in the winning team, that Willemse took the bit properly between his teeth in the international season and made the graduation from fringe international player to the world class player he ended the year as.

And then there is Junior Springbok captain Sacha Feinberg-Mngomezulu, who we first saw when he played as a replacement in last season’s quarter-final, was selected to tour but didn’t play.

With Italy beating Australia for the first time, and Ireland going through the autumn internationals unbeaten, plus Scotland pushing New Zealand all the way before thumping Argentina and being unlucky not to beat the Wallabies at the start of this phase, it could be argued that the success of the Vodacom URC, and the impetus given to the competition by South African participation, was writ large.

It was a weekend of success for the home sides in the Vodacom United Rugby Championship, with three of the four South African sides victorious, until Cardiff upset the apple cart in Durban in the last match of round eight.

Springbok flyhalf Damian Willemse and utility forward Franco Smith reflected on the positives from their Castle Lager Outgoing Tour as the Boks wrapped up their campaign with a strong 27-13 victory against England at Twickenham on Saturday, which saw them head back to South Africa with two impressive victories and two marginal defeats.

It was a night to forget for the Cell C Sharks as Cardiff delivered a masterclass in wet-weather rugby to win their Vodacom United Rugby Championship clash in Durban by 35-0 (half-time 23-0) on Sunday evening.

Wearing the mantle of defending champions and nine-time winners of the Emirates Dubai Sevens is one thing, but arriving at The Sevens Stadium bereft of top form, playing in a tough pool and with a number of new players, is something else.

The Springbok Women's Sevens squad are out to achieve a couple of objectives when they kick off their participation in the International Invitational tournament of the Dubai Sevens on Thursday, according to acting coach Renfred Dazel, with the main aim to find their identity and build momentum towards next year.

Another round of “SA v Wales” in the Vodacom URC

The weekend’s exciting Vodacom United Rugby Championship ninth round action once more will see all four South African sides hosting Welsh opposition, starting with Friday evening’s clash in Durban between the Cell C Sharks and Ospreys, which kicks off at 19h10.