The Airlink Pumas emerged as the Cinderella men of the Carling Currie Cup’s modern era when they pipped Windhoek Draught Griquas 26-19 in a momentous final in Kimberley on Saturday afternoon to clinch their first title.

In a historic battle of ultimate underdogs, the visitors maximised their maiden finals appearance by outscoring the hosts by three tries to one in front of a capacity crowd of 8,500 to capture the crown jewel of South African rugby.

The Airlink Pumas class of 2022, captained by flanker Willie Engelbrecht, seized the day with a heroic performance to cap a fairy-tale season under long-time coach Jimmy Stonehouse.

The spirited smaller unions, who defied the odds to reach the decider, largely stuck to what brought them to the doorstep of destiny, playing high-octane rugby after a nervy first 20 minutes in a final unlike any other in the history of the oldest provincial rugby competition in the world.

The Lowvelders’ temperament formed the foundation of their triumph, which was powered by superior execution, finishing and defence. Their sharpness on attack and powerful driving maul saw them score two unanswered tries, which helped them take an 18-9 lead into the break, with the hosts managing just three penalty goals via the boot of George Whitehead.

The lead grew to 17 before the Peacock Blues produced a fightback, which was sparked by a scintillating try by Munier Hartzenberg in the 57th minute. A late monster penalty goal from Whitehead, who’d also converted his wing’s try, gave Windhoek Draught Griquas a chance to force the final into extra time with a last-gasp converted try.

Eduan Swart goes over for a crucial try just before the break that stretched the Airlink Pumas' lead to 18-9.

However, it never came as the Airlink Pumas held on. With their historic victory, the unheralded men in pink and grey rose from undesirable to undeniable on what will live on in Carling Currie Cup lore as the Nelspruit union’s greatest day.

For the Peacock Blues, who were playing in their first final in 52 years and pursuing a fourth title, it was a cruel case of so close, yet so far. The men from the Northern Cape had a phenomenal first season under coach Pieter Bergh but fell just short of following in the footsteps of the legendary victorious teams of 1899, 1911 and 1970. Several of the heroes of the latter triumph were in attendance.

The Airlink Pumas, playing in their first-ever final, drew first blood after just two minutes, Eddie Fouche slotting a penalty goal following a no-arms tackle by Hanru Sirgel. Whitehead levelled the scores right away, though, after Derik Pretorius got over the ball and won a breakdown penalty from the restart.

The nerves then became evident with both sides guilty of making unforced errors for the remainder of the tense opening quarter. Whitehead put the hosts in front with his second penalty goal in the 21st minute, Eduan Swart - one of the visitors’ standouts on the day - pinged by referee Cwengile Jadezweni for not rolling away before the final came alive.

The synergy that’s fuelled the Airlink Pumas’ rise came to the fore as sterling interplay between the forwards and the backs culminated in a try for Devon Williams, who went over in the right-hand corner after an excellent one-handed take of Thinus de Beer’s long pass. Fouche nailed the difficult conversion to make it 10-6.

The Lowvelders’ discipline was becoming problematic and Whitehead made them pay with an icy cool long-range penalty goal, but the visitors immediately pulled three points back and nearly had more after Sebastian de Klerk had made a scything line break that had the Peacock Blues at sixes and sevens. 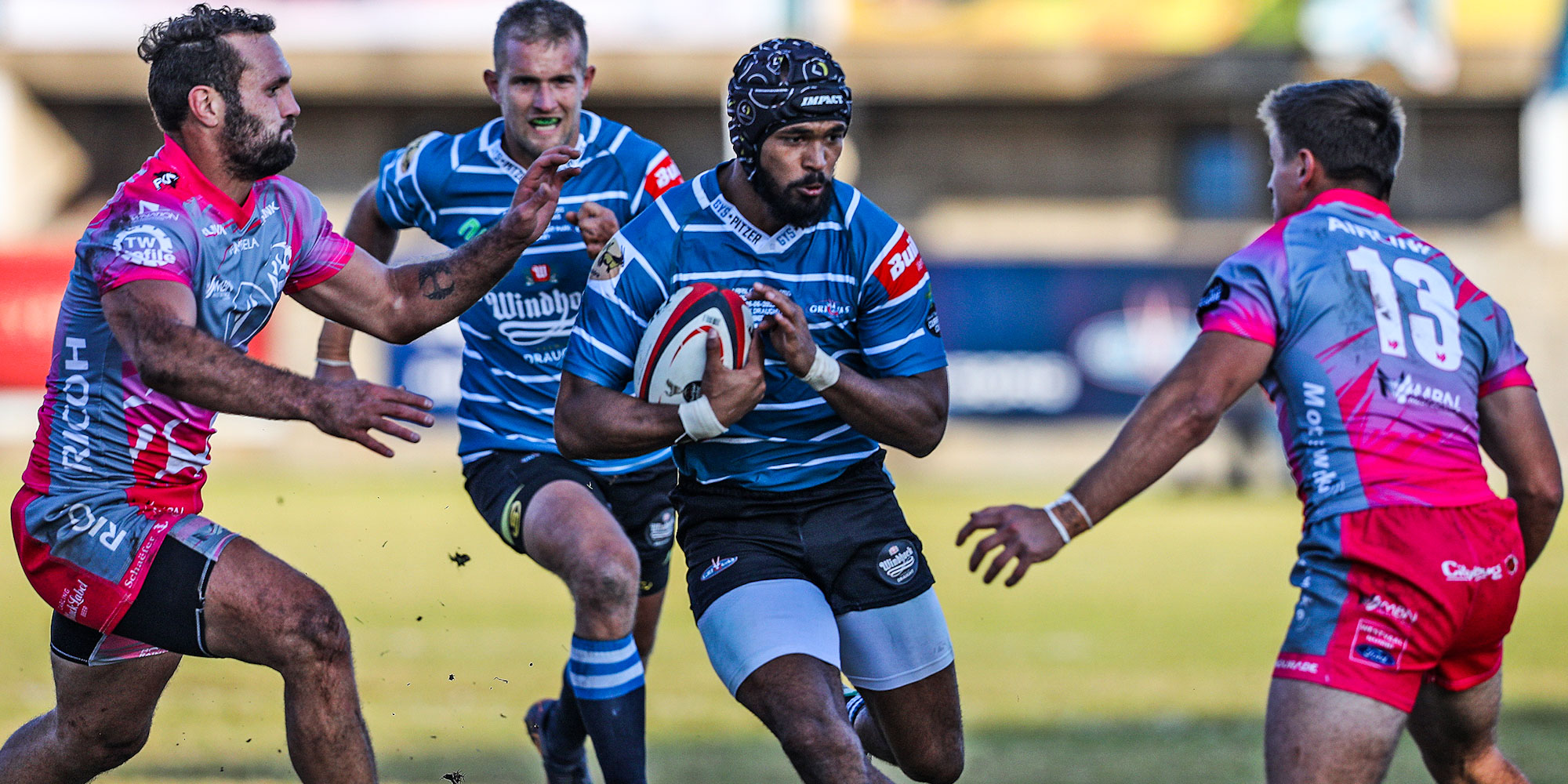 Munier Hartzenberg bursts through for Windhoek Draught Griquas' only try of the final.

With their tails up, the Airlink Pumas turned down a kickable penalty and capped their first-half dominance with a timely try in the final play of the first half, Swart rumbling over from the back of a driving maul. Fouche couldn’t add the extras but the visitors would’ve been ecstatic with their 18-9 halftime lead.

They appeared to land an even greater blow at the start of the second half as the mercurial Williams scored a stylish chip-and-chase try. However, it was disallowed upon review by TMO Quinton Immelman, who ruled that De Klerk’s pass to his fullback had drifted forward.

Nevertheless, the Airlink Pumas were still the first to score after the break as the mounting pressure on the hosts yielded three more points for Fouche. Things went from bad to worse for Windhoek Draught Griquas as they had a kickable penalty overturned when Werner Gouws was caught palming the face of his grounded opposite number Daniel Maartens. The piece of cynical play led to the Airlink Pumas’ third try, with a good run by Jade Stighling and a great offload by Maartens seeing captain fantastic and Champion of the Match Engelbrecht score.

Trailing 26-9, it was do-or-die for Windhoek Draught Griquas, who needed something special to get back in the game and it came through Hartzenberg, who blasted through a gap and sped in for the hosts’ opening try as the crowd came alive. Whitehead’s conversion made it a 10-point game with 22 minutes left on the clock.

Bolstered by the crucial score, Windhoek Draught Griquas dug deep on defence to weather a sustained onslaught, ultimately holding the visitors up over the tryline to escape unscathed. As precious seconds ticked away, the home team had a golden opportunity to escalate the comeback as they set up a lineout in the 22. However, in a microcosm of their lack of accuracy at crucial times on the day, replacement hooker Simon Westraadt’s throw-in wasn’t straight.

Momentum had swung in the hosts’ favour and needing to score twice, they opted to kick at goal with three minutes left. Whitehead hit the upright but made good with a booming penalty goal moments later to give them a glimmer of hope, but the Airlink Pumas’ defence held firm and the Nelspruit side celebrated the sweetest of victories.

The Down Touch Griffons ended their 2022 season in perfect fashion with a commanding 45-16 win over Eastern Province at HT Pelatona Projects Stadium in Welkom on Friday, winning the Carling Currie Cup First Division title, having last lifted that coveted trophy in 2017.

Today, exactly 27 years ago, Francois Pienaar led the Springboks to what many believed was an impossible task as they lifted the Webb Ellis Cup in South Africa, and in 77 days, the country will host a second global showpiece when the Rugby World Cup Sevens kicks off in Cape Town.

Catch the Junior Boks' opening game in the U20 Summer Series, at 17h00 against England from Verona in Italy, live here. We also have Afrikaans commentary, provided by the tournament organisers - watch on the lower video.

Roos comes up top with Player of the Season Award

DHL Stormers No 8 Evan Roos has completed a dream tournament by walking away with the inaugural Vodacom Player of the United Rugby Championship Season Award, which forms part of the annual SA Rugby Awards.

Record scores of 108-0 against Zimbabwe and 128-3 against Namibia in the Rugby Africa Women's Cup highlighted the growing preparedness of the Springbok Women for the Rugby World Cup in New Zealand, to be played in October this year. But the two-week assembly of the squad in Cape Town also brought delight on a personal level among the squad.

The top Under-16 and Under-18 girls rugby players in the country will start the highlight of their annual season this week when the SA Rugby U16 & U18 Girls Weeks kick off in Welkom on Monday.

Boks insist: "We will not underestimate Wales"

Springbok assistant coach Deon Davids and prop Ox Nché insisted on Monday that they would not underestimate Wales as they started their preparations for the opening Castle Lager Incoming Series Test at Loftus Versfeld on Saturday, saying they had to deliver a quality performance on the day.

Junior Springbok flyhalf and captain, Sacha Mngomezulu, has echoed the words of his coach Bafana Nhleko, calling for an overall improvement in their game and a strong mentality if they want to topple Ireland in their second pool match of the Six Nations U20 Summer Series in Verona, Italy on Wednesday.