Springbok Women’s coach Stanley Raubenheimer praised his charges for not dropping their intensity on attack as South Africa opened their Pool A Rugby Africa Women’s Cup campaign with a commanding 108-0 win over Zimbabwe at City Park in Cape Town on Wednesday.

The Springbok Women ran in 17 tries without conceding any, with Nomawethu Mabenge (wing) and Aphiwe Ngwevu (centre) each bagging a hat-trick.

For Raubenheimer, it was a pleasing effort in his team’s first Test match since November last year, especially as they managed to keep Zimbabwe scoreless.

“We are focusing on a number of things at this three-week camp, which includes this Test and the one against Namibia next week,” said Raubenheimer.

“One of those is defence and how to improve on that, so from that perspective, I am pleased with the effort. There were still line breaks by Zimbabwe, so it was not a perfect performance on defence by all means, and that means we have some work to do at training.

“To score all those tries and still keep the intensity up, was well done by the team and they deserve credit for that.”

Raubenheimer said the team stuck to their plan even when they seemingly scored tries at will: “That was good discipline on our side. We kept to our structures and the rewards came, so I am happy. We will look at our defensive lapses, but overall, a good day for all involved.” 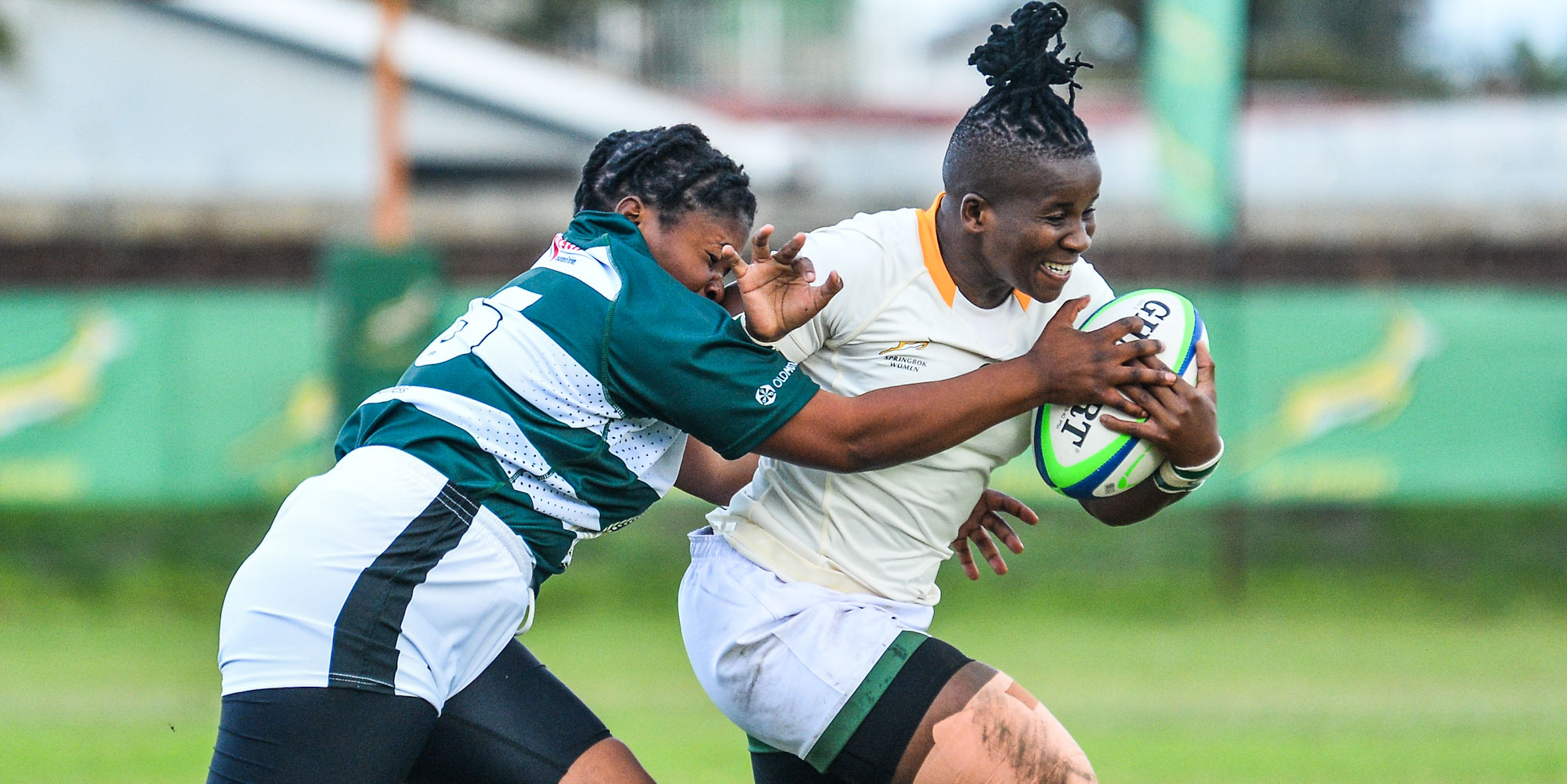 Lusanda Dumke on the charge.

Mabenge scored her first try in the third minute and from then on in, a South African try became a regular feature of the match.

Zintle Mpupha followed shortly after Mabenge’s run down the line before the forwards took matters in their hands. Lindelwa Gwala (hooker) was the beneficiary of a good lineout drive by her pack, scoring the third try of the match.

Zimbabwe enjoyed some possession and moved into the half of the Bok Women, only to concede a turnover and another try. Libbie Janse van Rensburg broke well and when stopped, the flyhalf putting wing Ayanda Malinga in space and over in the corner.

Industrious No 8 Sizo Solontzi was next on the score sheet off the back of another strong drive from the lineout before Mpupha sliced through for her second.

The awareness of the SA side on attack brought them the next try. Zimbabwe tried to clear from near their line, but the kick failed to find touch, and in a flash Lusanda Dumke was worked over.

Mabenge was on the score sheet for a second time soon after, again following a bruising run down the line. 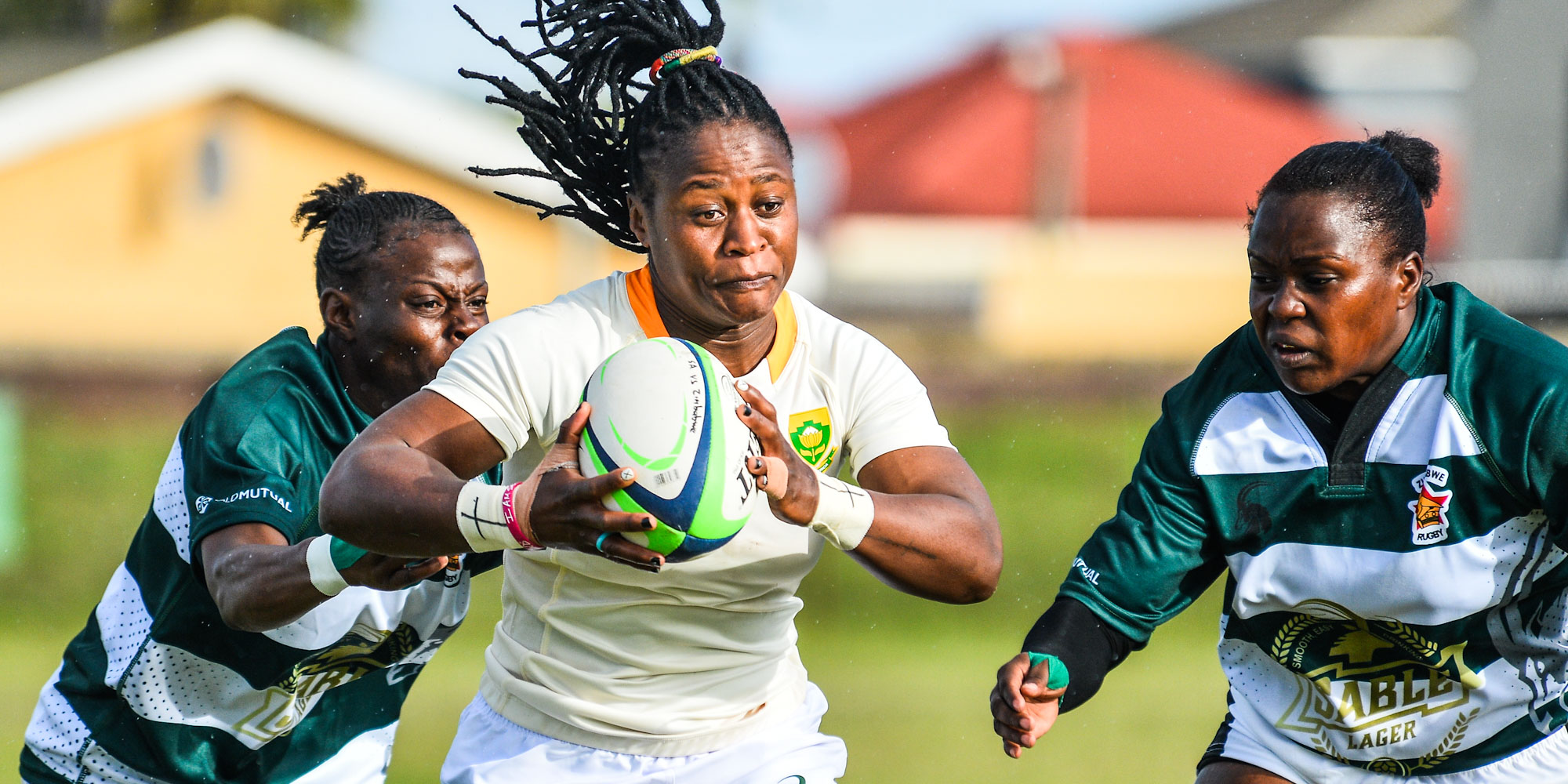 Good interplay handed the home side their next five pointer when Sinazo Mcatshulwa scored. The forwards created good go forward ball with a number of drives, the backs exploited the space and from a resulting ruck, the loose forward found herself in space.

That brough the 50 up, with the try closing the half out with the Bok Women 53-0 in the lead.

The second half scoring was opened by Tayla Kinsey who kicked a penalty goal and soon had a conversion as well, as Nadine Roos (fullback) scored her first five-pointer in Test match rugby.

Mabenge got her brace soon after with Kinsey converting to take the score to 75-0. It then became the Ngwevu show with the powerful centre scoring three times in the half, with a second by Solontsi and Malinga the other five pointers.

Zenay Jordaan converted the Malinga try that brought up 100 points on the scoreboard, and then converted Ngwevu’s third as well as the Bok Women ran out of time.

Springbok coach Jacques Nienaber said on Tuesday it was “awesome” to have two South African sides, the DHL Stormers and Vodacom Bulls, contest the inaugural Vodacom United Rugby Championship final, even though it means the Boks have had to be creative with their limited numbers at training at their preparation camp in Pretoria.

If the inaugural Vodacom United Rugby Championship has proved one thing, it is that we are on the cusp of a new rivalry between Ireland and South Africa.

Brace to referee the Grand Final in Cape Town

The match official appointments for the Vodacom United Rugby Championship Grand Final have been confirmed, with Ireland’s Andrew Brace appointed as the referee for this weekend’s eagerly-awaited showdown between the DHL Stormers and the Vodacom Bulls in Cape Town.

DHL Stormers No 8 Evan Roos has added a third prize of the inaugural Vodacom United Rugby Championship Awards to his personal haul after being voted Vodacom Fans’ Player of the Season.

Springboks encourage youth as they mark celebrations in Mamelodi

The Springboks celebrated Youth Day with a special visit to the Thandanani Drop-Inn Centre in Mamelodi in Pretoria on Wednesday, with several players unloading food, chopping vegetables and serving meals to young children, in conjunction with FoodForward SA.

SANZAAR confirmed the 12-match schedule for the Castle Lager Rugby Championship on Thursday, with an innovative 'mini-tour' format introduced in what is a departure from the previous home and away structure that has been in place since 2012 when Argentina joined the Springboks, Australia and New Zealand to create a four-team competition.