The Blitzboks started fairly slowly against Spain to win by 31-12 after conceding the first try of the match, but a strong second half carried them through. They then conceded two quick tries against Canada before hitting back to win 19-14, and a late try against Australia sealed a well deserved 22-19 victory.

Springbok Sevens assistant coach, Renfred Dazel, said afterwards that the performance against Australia was much more to the liking of the coaching staff, and if the squad continue with that form, Sunday could be a productive one for the South Africans.

“For us as coaches, we are pleased with the effort from the players, and we hope we can take this form into the Samoa game,” said Dazel.

“We are getting closer to the standard we want to play and we as coaches believe that if we can continue with that, success could not be far off. The players stuck to the plan much better and did what we asked of them as coaches.

“If you look at the Australian match and how we handled them, it shows that the execution was good. We closed their space and executed our tackles. There is always room for improvement, and we can still get better in some areas.”

The match against Samoa will be very physical, Dazel predicted: “We have not played Samoa in a while and only watched them on tape. One thing is guaranteed and that is the physicality they will bring. They are going to come straight at us and try and dominate the contact areas.”

Spain scored first and last in the match that saw the South Africans cross the tryline five times in what turned out an efficient, rather than a spectacular performance.

Coming off three consecutive defeats in Singapore last weekend, the Blitzboks took a couple of minutes to hit their stride in the sixth tournament of the HSBC World Rugby Sevens Series and even conceded an early try to a competitive Spanish outfit.

Their attacking abilities came to the fore after that, and South Africa scored three times in the first half and twice in the second to ease into the rest of the tournament.

Darren Adonis opened the scoring for the home side to rebuke the early Spanish try, followed by two tries in quick succession to skipper Siviwe Soyizwapi.

The Blitzboks extended their try tally in the second half with Dewald Human and Impi Visser finishing off good attacking moves before Spain managed a late try in the final play.

Spain, who scored a famous win over the All Blacks Sevens at the same venue three seasons back, proved a handful, but also the ideal opponent to get the Blitzboks back to winning ways.

The South Africans then won their second match against Canada, 19-14. They were up 12-0 at the break and in control as the hosts made a number of errors in first phase play.

The South Africans played a controlled game and after a couple of intrusive plays on attack, JC Pretorius was worked into space for a 5-0 lead. Ronald Brown scored a well-worked try just before the break and converted for a 12-0 lead.

Canada shocked the Blitzboks in the early exchanges of the second half, scoring two converted tries within a minute to take an unexpected 14-12 lead.

The South Africans, without the injured Ryan Oosthuizen (calf) and Darren Adonis (ankle), kept their cool however and Selvyn Davids scored under the sticks soon after to restore the lead. Their defence then countered a last Canadian attack to secure the win. 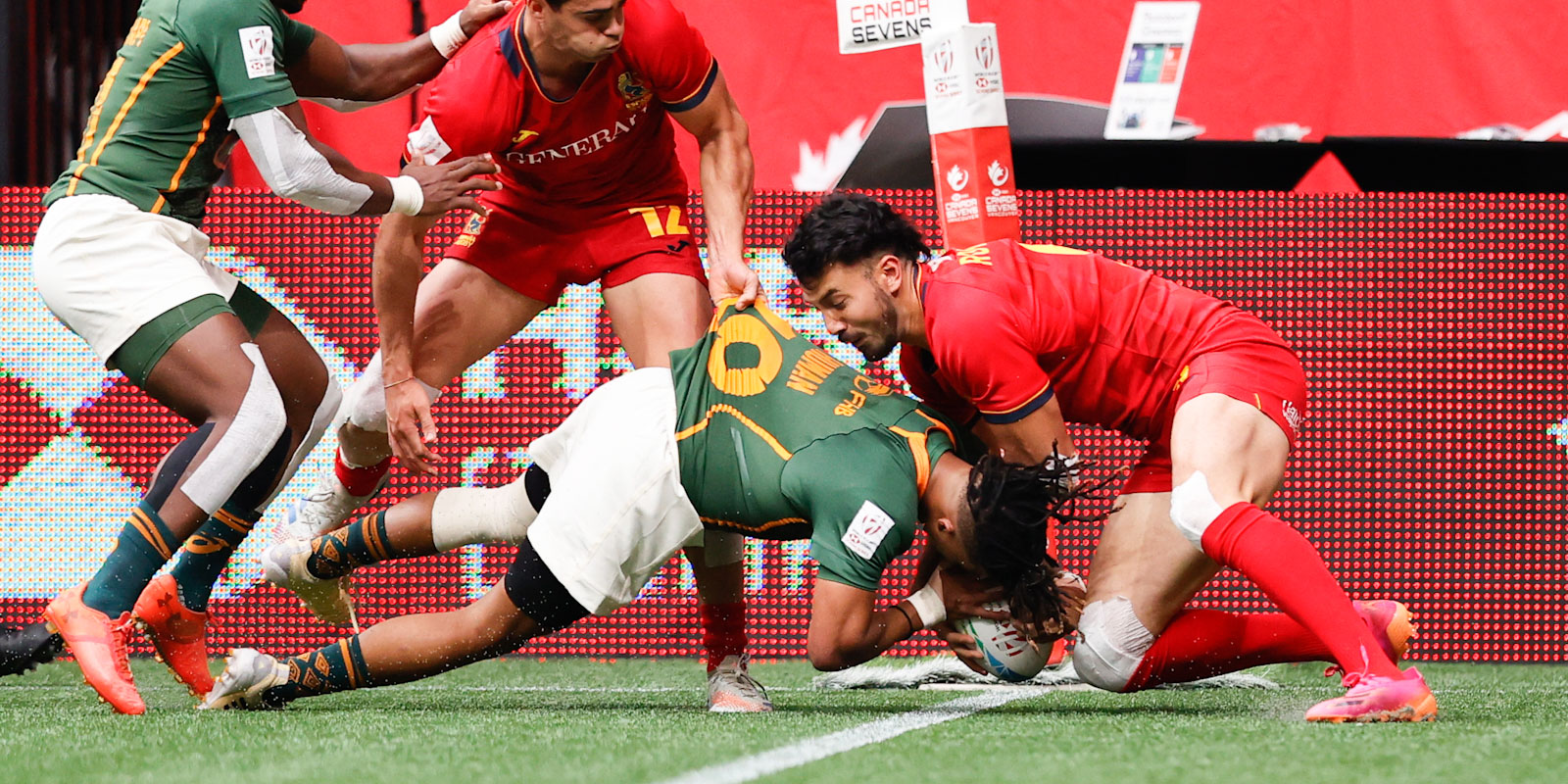 Dewald Human gets it down against Spain.

The final pool match against Australia proved a real humdinger, with both sides scoring a number of long range tries.

South Africa were on the board in the opening play, with Ronald Brown going over in the corner for a 5-0 lead. That was short-lived however, as Ben Marr scored a converted try to hand the lead back to Australia.

Brown got a second soon after Zain Davids ran strongly, but again the Aussies struck back almost immediately with a try that started close to their own tryline. This time Matthew Gonzalez scored and with the conversion, they had a 14-10 lead at the break.

The men from Down Under also got the next score, again from way out, with Nick Malouf dotting down for a 19-10 lead early in the second half. Zain Davids pulled once back with a strong barge and the conversion by Shaun Williams cut the deficit to two points.

That was wiped out one minute from time with JC Pretorius scoring after a good offload by Siviwe Soyizwapi. The South Africans then held out for a well-deserved win.

Every player that was part of the Springbok Sevens squad that won the Commonwealth Games gold medal this weekend had a d...

Relief and gratitude for Powell in Birmingham...

Springbok Sevens coach Neil Powell praised all 13 members of the Blitzbok squad for their superb performance at the Comm...

The Springbok Sevens team won the gold medal at the Rugby Sevens event of the Commonwealth Games when they produced a br...

The Springbok Sevens were in firm control of their Commonwealth Games quarter-final on Saturday evening as they beat Can...

The Springbok Sevens team have qualified for the Commonwealth Games quarter-finals after they beat Tonga (36-5) and Mala...