The sight of the Springbok Sevens team not finishing on the podium of any tournament they contest is rare, even more so when they lose three HSBC World Rugby Sevens Series matches in a row, which is what happened in Singapore this weekend.

The Blitzboks won two matches on the first day and then lost their next three – including a quarter-final reverse against Fiji – at the HSBC Singapore Sevens, an outcome that left Springbok Sevens coach, Neil Powell, extremely disappointed.

“Those were very disappointing and it is tough to digest,” said Powell of the three consecutive defeats (USA, Fiji and Argentina).

For Powell, who also saw his team failing to make a 12th consecutive semi-final, the reasons for their failures were straight-forward: “We played too much as individuals and too little as a team. Our strength lies in our ability to play as a unit and follow our principles and protocols, and we did not see enough of that this weekend.”

Powell also felt the team conceded too many easy tries.

“In the game against Fiji for example, we were in control on the field, but the scoreboard showed different. And we conceded a soft try against them when they scored from a kick-off we blundered,” he said, adding that he was not despondent and felt that the poor results came at an appropriate time.

“This was a good wake-up call for us as the Rugby World Cup Sevens comes closer. We cannot think that we just have to pitch up to win. We will have to rectify that.”

The team's discipline is also under scrutiny. They were heavily penalised, especially on the second day, and copped two yellow cards against Argentina.

“We will have to sit down and analyse why that happened. The number of penalties conceded were too many, especially in our last two games, and we need to improve in that area,” Powell said. 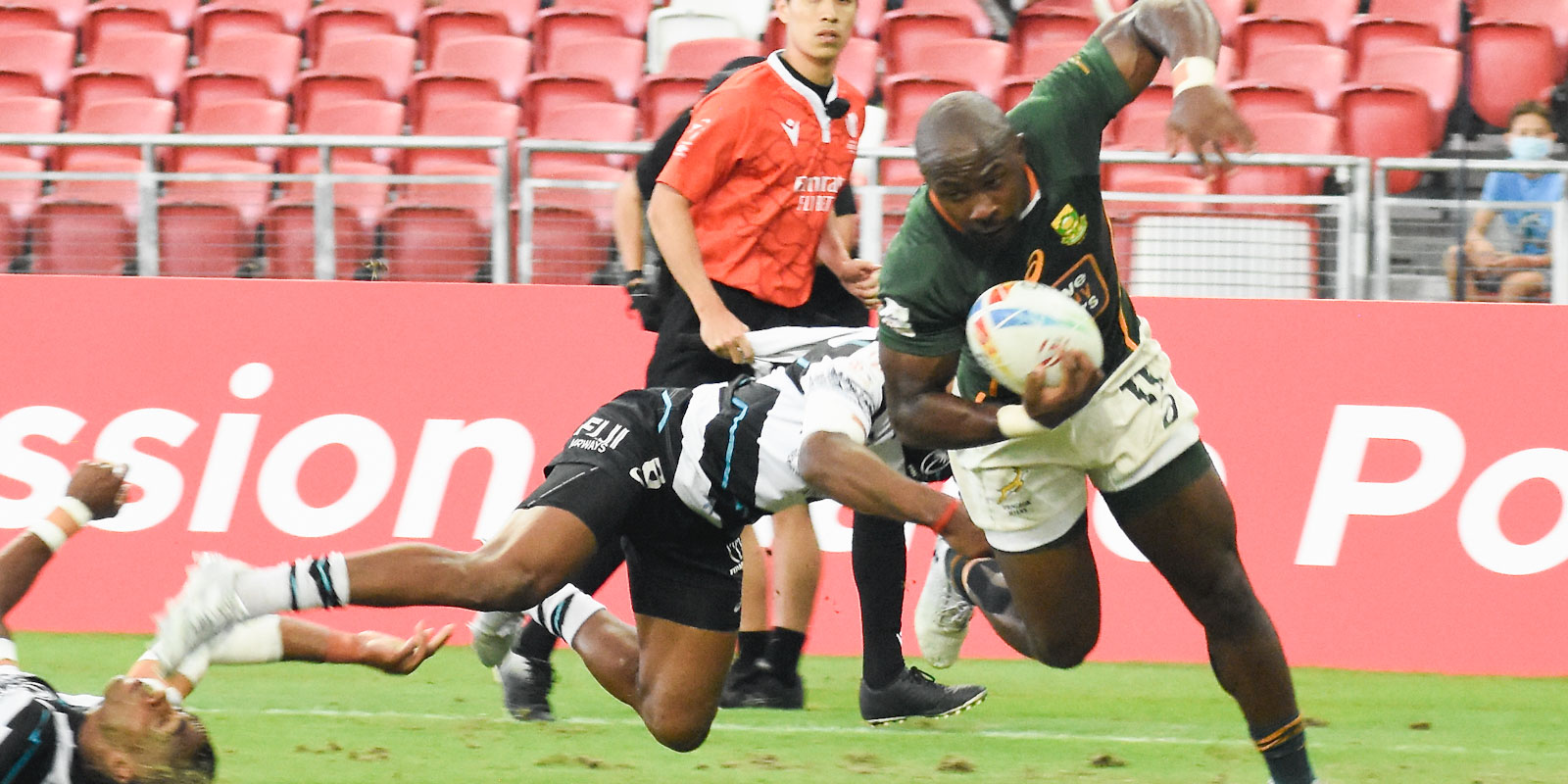 "We did not perform as a team,” said Soyizwapi.

“We did not keep to our standards or hold ourselves accountable out there. This is one that we will have to take on the chin.”

Soyizwapi said there will be no excuses: “We only have ourselves to blame for this. It is frustrating not knowing why we underperformed, but we will have to have a hard look at ourselves. We never recovered from that first defeat, so we need to get ourselves mentally in order and bounce back next weekend.”

The squad started day two without Sako Makata and Lubabalo Dobela, who picked up injuries. A full medical assessment of the squad will be done before departure to Vancouver and if needed, replacements from South Africa will be flown out for the HSBC Canada Sevens.

A summary of day two action can be found here.

Fiji won the Singapore title, beating NZ 28-17 in the final. South Africa still sits pretty in top spot, but both Argentina and Australia closed the deficit.

The top five teams on the log after five tournaments in the HSBC World Rugby Sevens Series are:

The DHL Stormers held out a determined Vodacom Bulls outfit with 14 men in the dying minutes of their Vodacom United Rugby Championship clash at the DHL Stadium in Cape Town on Saturday to secure a crucial 19-17 victory in this North-South showpiece.

Sharks take the spoils in a soaking wet Durban

The Cell C Sharks moved up to sixth place on the Vodacom United Rugby Championship log courtesy of a 37-10 bonus-point win over the Emirates Lions in a game that was played in wet and difficult conditions at Hollywoodbets Kings Park in Durban on Saturday afternoon.

SA Rugby announced on Friday that McDonald’s South Africa has joined their family of partners as the newest associate sponsor of the Springbok Sevens team, with their famous golden arches appearing on the Blitzboks’ shorts when they take the field at the HSBC Singapore Sevens this weekend.

South Africa will host two key local Vodacom United Rugby Championship derbies on Saturday which could have a big bearing on the final standings of the domestic sides as the scramble for playoff places reaches a peak, with only four weeks of round-robin matches remaining.

Bulls to host WP in SA Rugby U20 Cup Final

The Vodacom Bulls will host their DHL Western Province counterparts in the final of the 2022 SA Rugby Under-20 Cup competition at Loftus Versfeld in Pretoria, following their 78-3 away victory over Eastern Province U20 last Saturday.

Mr Mark Alexander, President of SA Rugby, expressed his condolences to the family, friends and team-mates of Liyabona Teyise, a pupil and first team rugby player at Dale College in King William’s Town in the Eastern Cape, who sadly passed away over the weekend following an injury sustained during a match.

The FNB Varsity Cup semi-final lineup has been confirmed with UFS Shimlas set to host UP-Tuks in Bloemfontein, and the UCT Ikeys pitted against Western Cape rivals Maties in Cape Town, with both matches scheduled for next Monday.