South Africa will host two key local Vodacom United Rugby Championship derbies on Saturday which could have a big bearing on the final standings of the domestic sides as the scramble for playoff places reaches a peak, with only four weeks of round-robin matches remaining.

The DHL Stormers will host the Vodacom Bulls in Cape Town at 14h00 and the Cell Sharks take on the Emirates Lions at 16h05 in Durban, with the only other match scheduled for the weekend a local Welsh derby between Cardiff and Scarlets at Cardiff Arms Park, also on Saturday.

Both the DHL Stormers and Vodacom Bulls will be seeking their fifth victory in a row this year when they meet at DHL Stadium, and a victory for either team – depending on the score – could see them leap into contention for a possible home quarter-final later in the season.

The Capetonians are currently SA’s top placed domestic side in sixth place on the log with 43 points, but the Vodacom Bulls and Cell C Sharks are hot on their heels in seventh (42 points) and eighth place (41) respectively, while the Emirates Lions are further down on the standings in 12th place (30 points).

This log-jam effectively means that victory for the teams from Pretoria or Durban this weekend could see them knock down the DHL Stormers’ position and add more pressure on the Capetonians in the final league rounds.

A win for the men from Cape Town, however, could push them into a valuable third or fourth place on the log at this vital stage of the competition, which would not only place them in contention for a possible home quarter-final it would also boost their confidence with another two home games remaining before they travel to Wales for their final league match in May.

Interestingly, the DHL Stormers and Vodacom Bulls have met just once before at DHL Stadium, with the visitors from Pretoria running out 20-16 victors in last season’s Rainbow Cup SA, which will boost their confidence going into the clash.

The DHL Stormers starting line-up shows four changes, three of them to the forward pack and one in the backline for the North-South clash. Hooker Scarra Ntubeni is back from injury, while there is a rotational switch at tighthead prop with Neethling Fouche starting and Frans Malherbe set to make an impact off the replacements bench.

Deon Fourie is back in the starting line-up at flank, while the only change in the backline sees Herschel Jantjies start at scrumhalf. Play-maker Warrick Gelant is also set to make his return from a replacements bench.

DHL Stormers head coach John Dobson said his team are looking forward to the match as they hunt a run of six consecutive home wins and hang onto their position at the top of the South African Shield.

“Any game between the DHL Stormers and the Vodacom Bulls is a big occasion and this one has all the makings of a classic," said Dobson. “Our team cannot wait to run out in front of our fans at DHL Stadium on Saturday and will be giving absolutely everything to get the result.”

Vodacom Bulls Director of Rugby Jake White made only once change to his starting lineup that defeated second-placed Ulster last week, with Lionel Mapoe replacing Cornal Hendricks at outside centre in a rotational switch, as they look to continue building winning momentum with the round-robin stages of the tournament nearing an end.

“After a few weeks of testing ourselves against some of the top overseas sides, we are excited to be involved in a local derby this week against an in-form side like the DHL Stormers,” said White.

“We expect a very tough match in Cape Town. The DHL Stormers have shown over the past few weeks how much of a competitive side they are in the Vodacom URC. They beat us at Loftus Versfeld in our last encounter, and they will definitely be an even tougher opponent this weekend in their own backyard.” 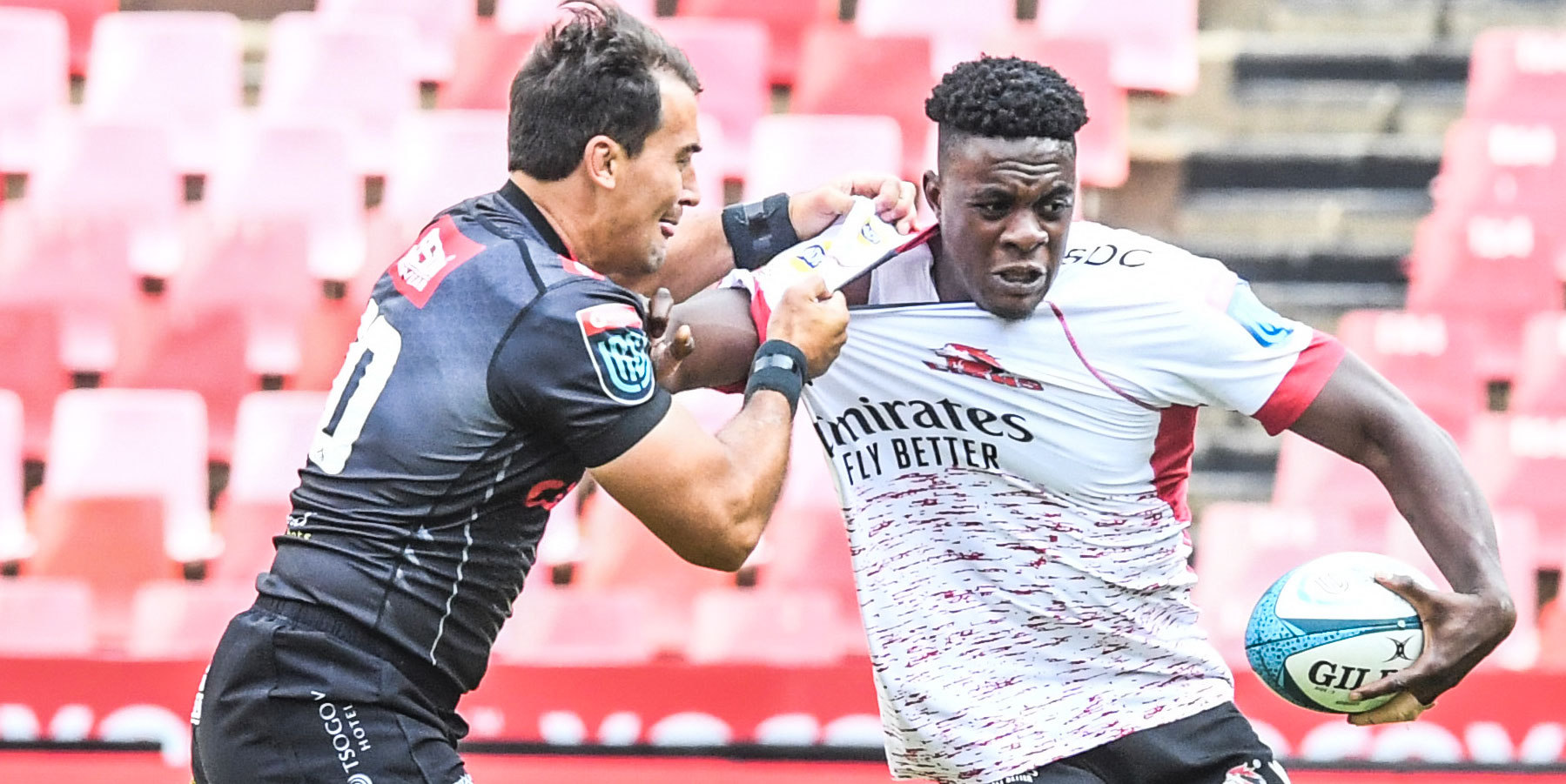 The Cell C Sharks will look to build on their emphatic victory against the Dragons last week when they host the Emirates Lions at Hollywoodbets Kings Park, and they will be expecting a big battle after the Joburgers’ impressive resurgence in the last few weeks in which they registered four consecutive victories.

The Durban side have only lost of their home matches this year, but they will be wary of the fact that the Emirates Lions will have the extra motivation of possibly jumping into the top 10 on the log and reducing the gap between themselves and the Durbanites on the table if they register a victory, and Cardiff defeats the 10th placed Scarlets.

Fueling the visitors’ motivation, a victory would see them become the first South African opponent to defeat the Cell C Sharks at home this season (the DHL Stormers drew in Durban in January), while a win would also mark their first win at the KwaZulu-Natal venue dating back to 2017.

Cell C Sharks head coach Sean Everitt once more had the good fortune to retain pretty much the same side that defeated the Dragons 51-3 in Durban last weekend with a couple of rotational changes thrown in to keep everyone fresh and hungry.

Lock Reniel Hugo returns to the starting line-up with Le Roux Roets shifting to the bench, while Springbok captain Siya Kolisi (flank) returns in place of James Venter, and the final change to the pack sees Henco Venter (flank) coming in for Jeandre Labushagne, who will feature off the bench later in the game. Thomas du Toit retains the captaincy.

“Last week’s win over the Dragons was a really good platform for us to build on and now it’s about us building momentum,” explained Everitt. “The log is really important at the moment and a win this week will be big for us because the other two local franchises are also playing each other and we’re fighting in the SA Shield competition.”

The Johannesburg-based side named a match-23 which features experienced scrummager Jannie du Plessis, who will face his former franchise for the return leg of the tournament.

“I think it will be a forward dominated battle, particularly when it comes to scrums and mauls,” said Emirates Lions forwards and lineout coach Albert van den Berg. “Their kicking game is also quite a powerful weapon, so that's an element we've prepared for in our sessions this week. If we can counter those aspects successfully, we feel we’re in with a shout come Saturday.”

The Springboks will get their preparations for a testing international season underway on Sunday as head coach Jacques Nienaber and his management team host the first of two alignment camps.

The challenges he’s had to overcome to become a Springbok Sevens player in the HSBC World Rugby Sevens Series are well documented; however, it was not only the resilience Ronald Brown showed to compete at the highest level that gripped those who saw him play, but also his brilliance in the Blitzbok jersey that endeared him to so many in such a short space of time.

The Vodacom Bulls returned to the summit on the Carling Currie Cup log courtesy of a bonus-point victory over DHL Western Province in Pretoria on Wednesday night, after the Cell C Sharks and Airlink Pumas maintained their push for semi-final spots with good wins.

After a number of matches against foreign opposition in the Vodacom United Rugby Championship, it’s time for local action when the Cell C Sharks host the Emirates Lions at Hollywoodbets Kings Park in Durban on Saturday afternoon.

Du Plessis back for Lions in Durban derby

The Emirates Lions will look to make it five in a row when they face the Cell C Sharks in Durban on Saturday in the Vodacom United Rugby Championship.

The DHL Stormers held out a determined Vodacom Bulls outfit with 14 men in the dying minutes of their Vodacom United Rugby Championship clash at the DHL Stadium in Cape Town on Saturday to secure a crucial 19-17 victory in this North-South showpiece.

Sharks take the spoils in a soaking wet Durban

The Cell C Sharks moved up to sixth place on the Vodacom United Rugby Championship log courtesy of a 37-10 bonus-point win over the Emirates Lions in a game that was played in wet and difficult conditions at Hollywoodbets Kings Park in Durban on Saturday afternoon.

The DHL Stormers and Cell C Sharks firmed up their prospects of reaching the Vodacom United Rugby Championship playoffs with hard-fought SA derby wins on Saturday, and the Vodacom Bulls are still in contention to reach the top eight despite a defeat in Cape Town.

Blitzboks come up short in Singapore

The Springbok Sevens team on Sunday came up short in the defence of their HSBC Singapore Sevens crown as they suffered defeats against Fiji in the Cup quarter-finals and Argentina in the fifth placed semi-final.

The Springboks will get their preparations for a testing international season underway on Sunday as head coach Jacques Nienaber and his management team host the first of two alignment camps.