The Blitzboks overcame a never-say-die Scotland in the Cup quarter-finals of the Seville tournament, winning 31-24 which also saw them stretch their winning streak in the World Series to 32 matches.

The Blitzboks started the quarter-final without Dewald Human, who copped a three week suspension after an illegal tackle in the final pool match against the USA in Estadio Olimpico de la Cartjua, but they still managed to outlast the Scots due to their ability to play the big moments, something coach Neil Powell alluded to afterwards.

"It was a tough day and we need to go and have a proper review on why it was," said Powell.

"Things certainly did not go our way today and the guys had to fight hard to make it three wins out of three, something I cannot fault. It was not lack of effort, we were just not as clinical as we can be."

Powell's troops were trailing Spain and the USA in their pool matches on Saturday and against Scotland, they again battled to gain the upper hand in the opening half against a hard-running team.

The Scots opened the scoring when Jamie Farndale raced through after a minute of play, but the rebound was swift, with Shaun Williams getting the equaliser after Justin Geduld probed and provided some magic.

The Scots replied immediately through and Reiss Cullen scored to hand his team the lead again.

Sako Makata, nowadays a prop for the Blitzboks, then ran like the wing he once was and scored a great try to hand his team the lead for the first time in the match.

The Blitzboks extended their lead when Ryan Oosthuizen was rewarded for his stellar efforts and at 19-12 at the break, South Africa had some breathing space.

The second half saw the introduction of Selvyn Davids and a blink, he added another try, but the Scots came back again, scoring from their own half.

Davids did his usual double to confirm the result, but Scotland got some bragging rights by scoring the final try of the match.

In the second game against the USA, the impact of their bench again proved instrumental as Powell started with a number of players who had limited time on the field last weekend, and they did not disappoint.

Darren Adonis looked dangerous at centre and Williams, in his first start for the Blitzboks, scored two tries, the second securing the win late in the second half.

The first half was tight, with the USA twice taking the lead. Kevon Williams scored first for the USA, giving his side a 7-0 lead after coming off a good line, before Human spotted a ruck without a pillar defender for the USA, and snuck away to score under the sticks.

Branco du Preez levelled the scores with his conversion, but Kevon Williams again outfoxed the Blitzbok defence to take his side into a 12-7 lead at the break.

Selvyn Davids was introduced in the second half, along with JC Pretorius and Impi Visser, and they brought real stability on defence.

Christie Grobbelaar scored to draw the scores level before Williams scored twice in three minutes to seal the win.

Perry Baker did race through in the last play of the match, but the win was secured for the Blitzboks. 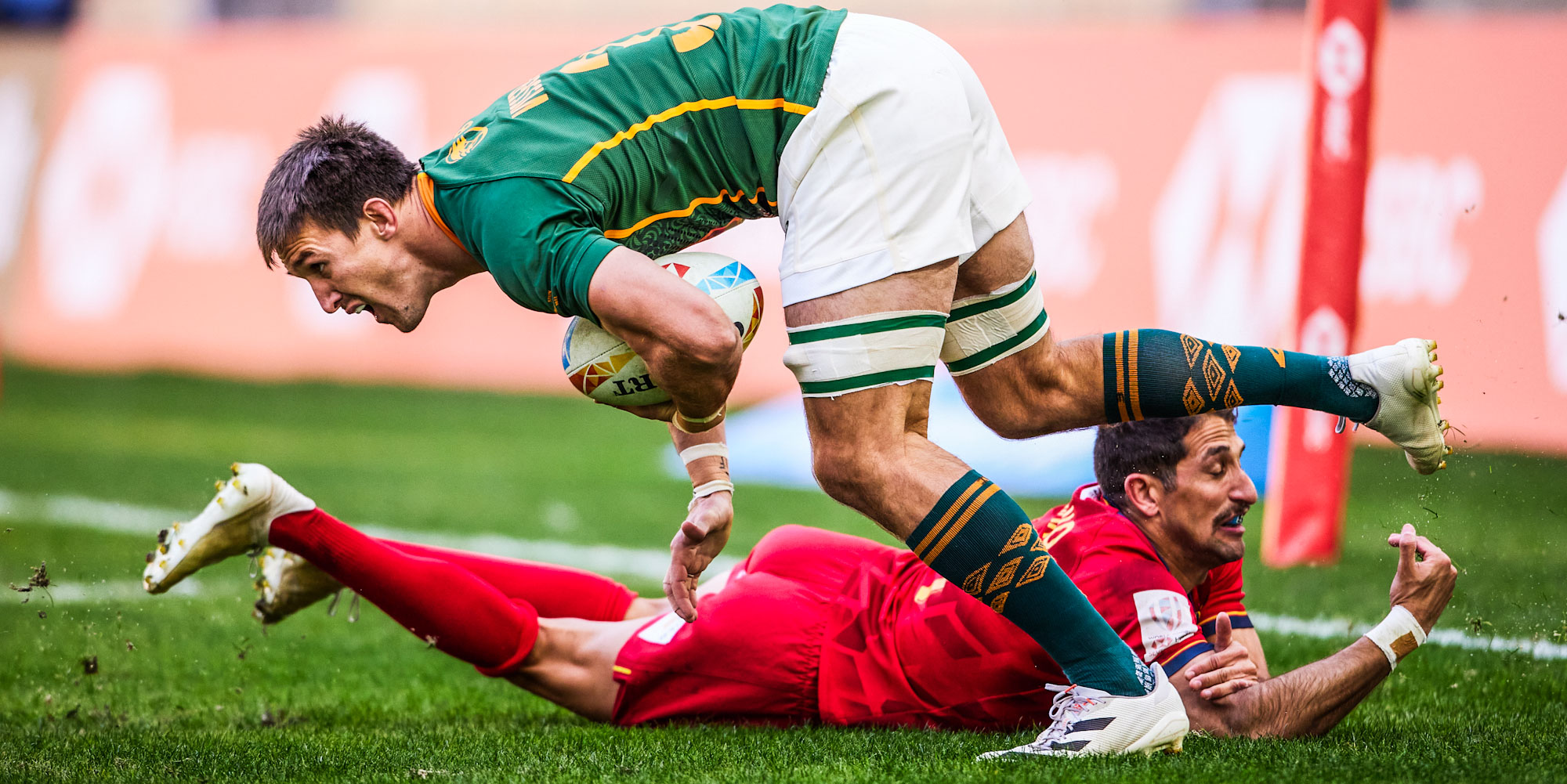 In their first game on Saturday, the Springbok Sevens scored 28 unanswered second half points to storm back into their Pool A match, beating hosts Spain by 33-12.

Scores were tied 7-7 at the break, but a try from the second half restart saw the Spanish take an unexpected 12-7 lead. The reply by the Blitzboks was brutal, though.

Spain came out with a purpose and asked a lot of questions of the Blitzbok defence in their clash at the HSBC Spain Sevens in Seville, but the hosts battled to find the final pass to cross the SA line.

Instead, after six minutes of play, it was Mfundo Ndhlovu who scored the opening try with a neat inside swerve. Du Preez converted, and the lead was 7-0.

From the restart though, and with seconds left on the clock, Spain won back possession and after a number of good probes, wing Pol Pla rounded the defence to score under the posts. Juan Ramos converted to draw scores level.

Spain had the perfect start to the second half. They once again won the restart and kept attacking down the blind side. That worked well and Enrique Bolinches scored in the corner to put the home side ahead by 12-7.

The home crowd was silenced soon after though as Selvyn Davids, who came onto the field in the second half, scored twice in two minutes to take back the momentum for the Blitzboks.

Oosthuizen then confirmed the swing in momentum after good build-up play by Williams, while Zain Davids came off a very handy angle to score the final try in the final minute of the match.

Kolisi: “Award could have gone to anyone”

Springbok captain Siya Kolisi said he was “honoured and grateful” to win the SA Rugby Player of the Year award for the 2021 season after seeing his named engraved on the prestigious trophy in Durban on Thursday.

Seasoned Springbok Willem Alberts will start at lock for the Emirates Lions in their Vodacom United Rugby Championship encounter against the Vodacom Bulls in Johannesburg on Saturday.

DHL Stormers coach John Dobson had to make two injury-enforced changes to their pack of forwards for the Vodacom United Rugby Championship encounter with the Cell C Sharks in Durban on Saturday.

Junior Springbok star Canan Moodie will be the latest Vodacom Bulls player to make his Vodacom United Rugby Championship debut when the men from Pretoria travel south on the N1 to take on the Emirates Lions in Johannesburg on Saturday.

Springbok Sevens coach Neil Powell applauded the effort of his squad on Sunday night, when they beat Australia by 33-7 in the final of the HSBC Spain Sevens in Seville.

The South African teams are struggling to start their climb up the Vodacom United Rugby Championship log due to a few shock results in this derby stage of the season, but the performances of perennial champions Leinster are at least offering some hope.

Carling Currie Cup action resumes on Wednesday after a break of two weeks with three back-to-back clashes in Kimberley, Pretoria and Durban, as the standings start to take shape.