There are few things more rewarding on the HSBC World Rugby Sevens Series than to finish a tournament on the top step of the podium, with a gold medal around your neck and fireworks going off in the background, and for Springbok Sevens flyhalf Dewald Human, it is when the saying “teamwork makes the dream work” really bears fruit.

As the Blitzboks are preparing for the fourth tournament of the 2022 World Series, the HSBC Spain Sevens in Seville this weekend, the playmaker said they will again apply the same principles that brought glory in Malaga last weekend.

“We are keen to contribute to our system and add value as we have seen what the rewards are,” said Human.

“If the system is functioning properly and every member in the squad is contributing, the results will come, and that is a very rewarding feeling.

“Whether you start the match or come off the bench, your responsibility remains the same, you need to make sure you put your teammate in a better position and you make sure you have his back. For us as Blitzboks, we enjoy playing for each other, so it is an easy motivation for every match.”

The 26-year-old Human captained the Blitzboks twice in the past, including in their HSBC Canada Sevens tournament victory in Vancouver in 2021, and said he is comfortable in his current role, providing back-up to Branco du Preez or Selvyn Davids.

“With the make-up of the team, I can slot in as sweeper or as flyhalf and am happy to contribute to either role. There is a good mix of experience and youth, so the team never really lose momentum when the bench comes into play,” he said.

Human, who has scored 169 points in 56 matches, had his fair share of injury problems in the past, but said he is feeling good at the moment.

“It is a frustrating part of the game and for now, I am trying to stay fit and in contention,” he said.

“There will be a lot of rugby in 2022 and I want to be part of the big tournaments later in the year as well, so I hope to keep on contributing. There are very good and experienced players in my position, but the nice thing is that we keep pushing each other to improve even more.” 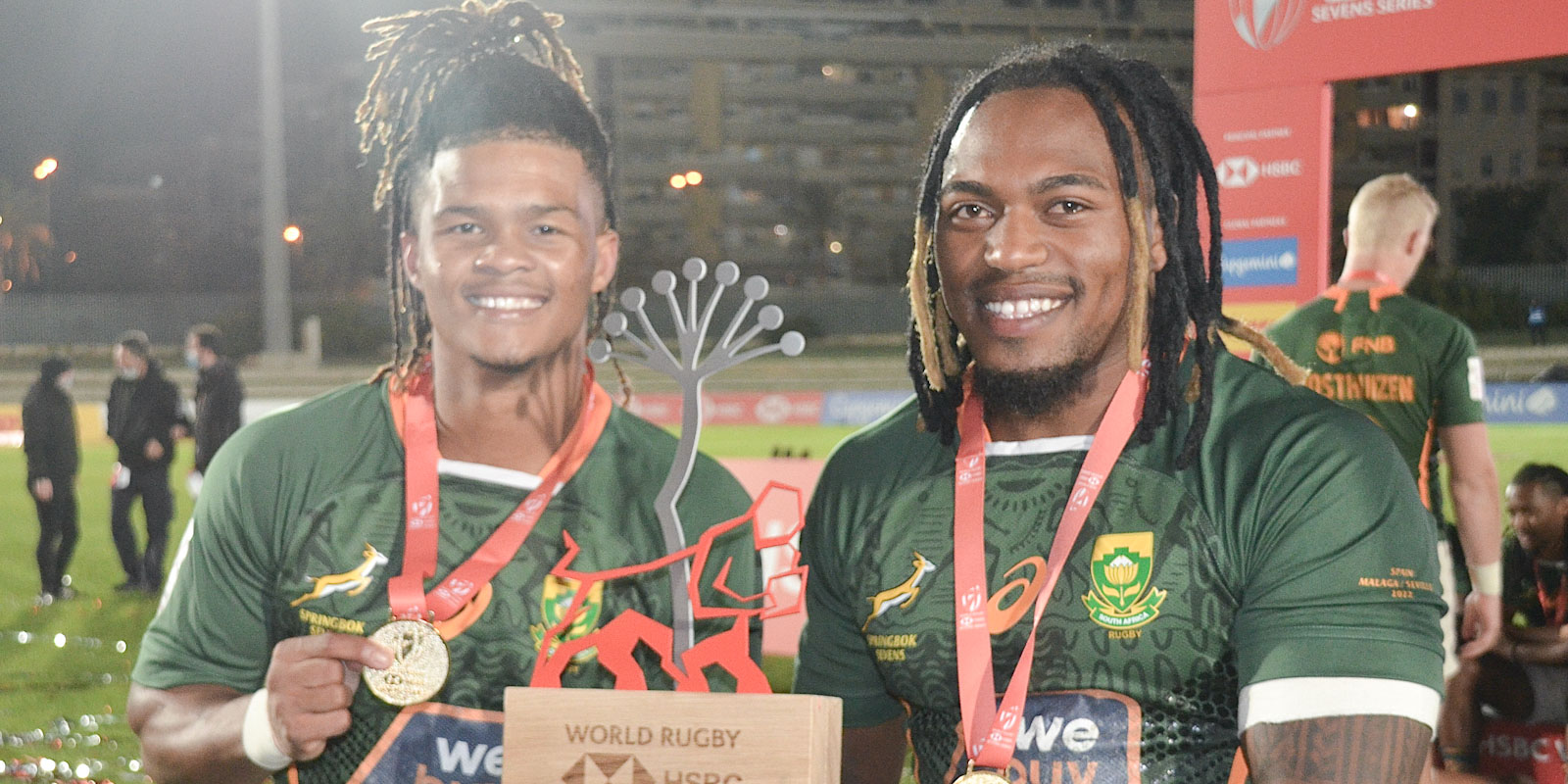 Dewald Human and Darren Adonis showing of their Malaga medals.

Playing in his fourth tournament this weekend, Darren Adonis is one of the newer squad members, but he is equally keen to lay down a marker for the remainder of the season.

Adonis was a member of the Toyota Cheetahs’ squad that won the Carling Currie Cup in 2019, before he made the switch to sevens, and he is not rueing the decision at all.

“Make no mistake, it was a huge change coming from fifteens and I am still learning, but so far so good,” said Adonis.

“It was really nice to make the team to travel here, and to win and contribute in Malaga was a great feeling. I like fifteens, but for now my focus is with the Blitzboks and I want to contribute to those things we want to achieve as a squad this year. I am finding my feet nicely and hope this continues in the future.”

Former Springbok captain and No 8 Bob Skinstad believes this past weekend was just what the four South African teams in the Vodacom United Rugby Championship have been looking for.

Coastal sides off to a winning start in 2022

The Cell C Sharks and DHL Stormers kick-started 2022 in the Vodacom United Rugby Championship on a victorious note on Saturday as they secured valuable away victories against the Emirates Lions and Vodacom Bulls respectively.

The Springbok Sevens team outplayed Australia 19-0 in the Cup semi-final of the HSBC Spain Sevens in Malaga on Sunday, to reach their fifth consecutive HSBC World Rugby Sevens Series final.