The Springbok Women squad departs South Africa on Sunday evening with great excitement and optimism, but also with a real sense of reality on what awaits them in France, Wales and England over next four weeks.

The squad is set to play against France in Vannes next Saturday before facing Wales in Cardiff a week later. They then move to England where they will train against the strong English squad before playing a practise match against England Under-20 in three weeks’ time. They hope to conclude the tour on a high when playing against the Barbarians at Twickenham in what will be a historic first for the Springbok Women.

History aside, the aim on tour will be to get their ducks in a row before next year's Rugby World Cup in New Zealand, where the Springbok Women will face France in the opening round. According to coach Stanley Raubenheimer, it is for this very reason why they have requested this encounter against the powerful French side.

"We have not played much rugby the last two years due to various reasons, so we need a reality check on where we are with our progress and preparation,” reckons Raubenheimer.

“France are currently ranked fourth on the world rankings, so to measure ourselves against them will be a good reference point on what we need to do before the RWC tournament in New Zealand next year."

The coach sees the tempo of play on tour as a crucial element to master.

"We don’t want to leave it until next year to see what France have to offer and by playing them now, we will see where we are intensity-wise and what step-up would be required. Another interesting aspect of the tour is that we will be playing four matches in as many weeks, another important factor our players will be exposed too.”

Raubenheimer was also at the helm during the side’s last visit to Wales, where the home side edged them in Cardiff.

"I don't think there is much of a difference between the two sides, but the reality is that Wales have a lot more games under the belt as a result of playing in the Six Nations, compared to us who were mostly inactive the past two seasons,” said Raubenheimer.

He has named a bigger squad than normal, resulting in a number of players who haven’t yet played in the Green and Gold jersey.

"We have seven debutants on tour, and they are there for a reason. I cannot guarantee that they will all play on tour, but they will be exposed to international rugby nonetheless by being part of the touring squad and the team environment. They need to show me in training why they want me to take them to New Zealand,” added Raubenheimer. 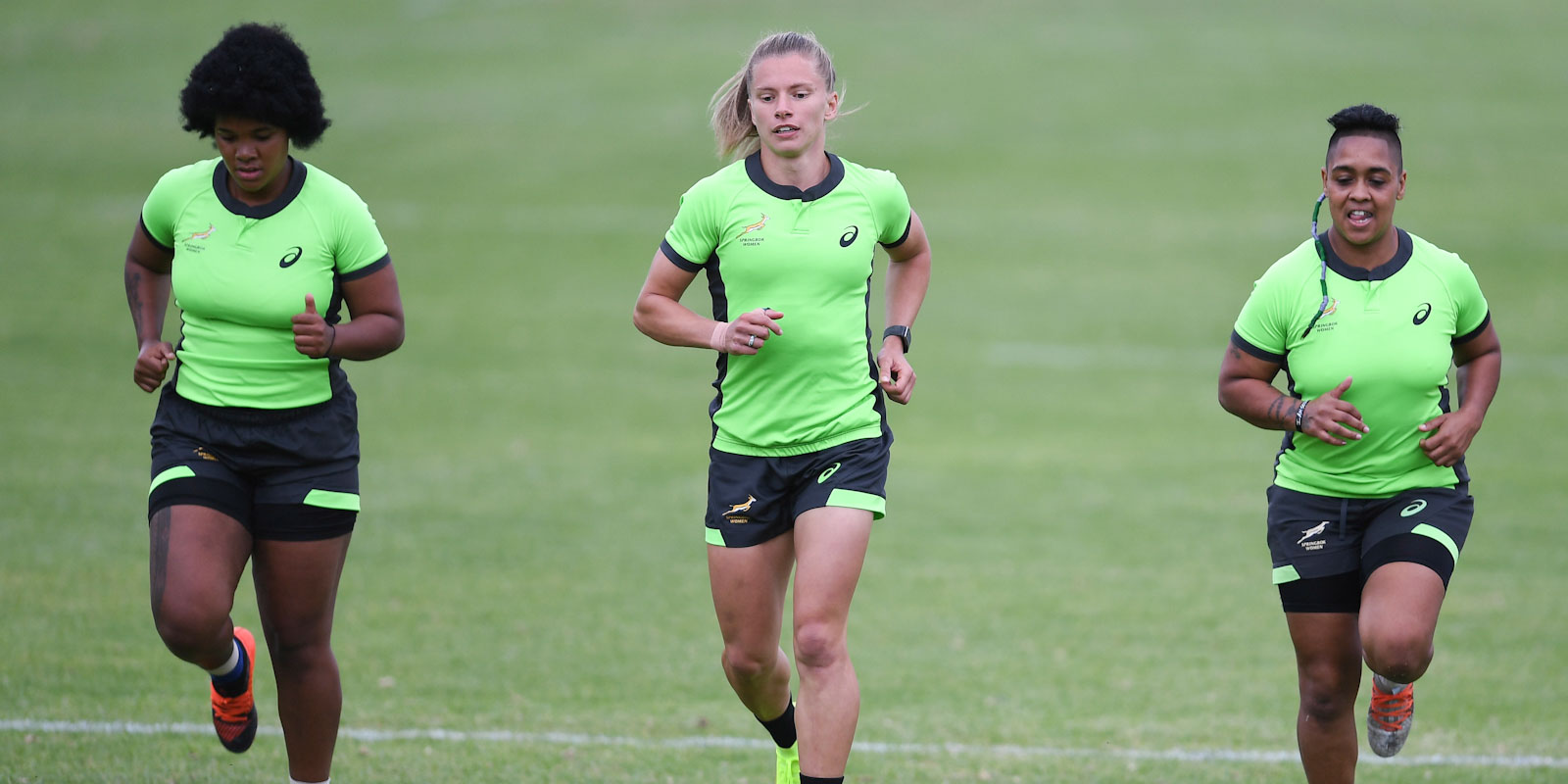 Zenay Jordaan (right) is the most experienced player on tour, while Nadine Roos (middle) and Roseline Botes (left) are two of the uncapped players.

There is a healthy core of experienced players though, amongst them flanker Lusanda Dumke. With tour captain, Sindi Booi unavailable at the time, Dumke captained her country against Kenya in the two Test-series staged in Stellenbosch in August and she also helped her provincial outfit, Border, to lift the SA Rugby Premier Division crown a couple of weeks later.

Dumke said they are keen to get on the plane and will be doing so with gratitude and no fear.

“We are all very pleased for this opportunity. This squad is one that just want to go out and play rugby as we love the game. The fact that we are playing France first-up could be a daunting task as they are one of the best teams in the world, but what do we have to lose? The pressure will be on them, not on us and we will be able to focus on what we want to achieve in the game,” explains Dumke.

"There is a good mix of experience and youth in the squad and this create a nice vibe and lots of energy. We tend to play well when the vibe is good, so we cannot wait to get over to France and get going.”

Midfiedler Jakkie Cilliers is one of several new faces in the squad and she only started playing for the Leopards in 2021. According to her, her outlook on the tour is one of learning what test rugby throws at you, adapting as much as possible and constant improvement.

The outside centre scored 10 points on debut against Kenya in August and feels that performance gives her some comfort of what awaits on this long-haul trip.

“No doubt, this will be a tour of learnings for the squad,” said the Northwest University student. “For many of us this will be our first overseas trip and will face our opponents for the first time, and that makes it very exciting. The travelling schedule and the rugby on consecutive weekend as well as the quality and intensity of play will be something we will experience for the first time as a squad and if we stick together, we can move only forward.”

The learning curve was a steep one indeed, but the Springbok Women's Sevens squad will benefit hugely from the opening d...

On paper, few would want to be in the boots of the Springbok Women's Sevens team when they make their long-awaited retur...

The top two teams in the Women's Premier Division, DHL Western Province and Border Ladies, tackle each other head-on in ...

The Springboks are bracing themselves for a massive battle against Wales in Cardiff in their opening Castle Lager Outgoing Tour match next week and said they are making the most of the opportunity to get their systems in place at their training camp in Paris.

Kinsey: Learning and improving will be key on tour

The Rugby World Cup is only 11 months away for the Springbok Women and as the clock is ticking towards the showpiece in New Zealand next year, the strong developmental nature of their November Series tour to France, Wales and England will form an important part of their end-goal.

The names of the 15 players in the starting team for the exciting Carling Champions Match – which was selected by fans of the Carling Currie Cup teams – were revealed on Thursday, with Vodacom Bulls hooker Schalk Erasmus leading the way with the most votes from rugby supporters across South Africa.

Mr Mark Alexander, President of SA Rugby, paid tribute to former Springbok No 8 Albie Bates, who passed away from natural causes last week at the age of 80.

The experiences she has picked up over the last couple of weeks as a professional player in England have enriched Springbok Women's centre Zintle Mpupha in a big way, and she is now hoping her teammates can benefit from that.