The Springboks are bracing themselves for a massive battle against Wales in Cardiff in their opening Castle Lager Outgoing Tour match next week and said they are making the most of the opportunity to get their systems in place at their training camp in Paris.

The Boks arrived in Paris on Saturday for a one-week training camp which also involved participating in promotional events for the 2023 Rugby World Cup in France, and Mbonambi said they were pleased with the strides made so far as they adapt to the cooler and occasionally wet conditions in the French capital.

However, in that time South Africa won their two Rugby World Cup matches against the Welsh - the quarter-final in England 2015, and the semi-final in Japan in 2019.

“Wales are always a tough team to play and a difficult team to beat, especially at home,” said Mbonambi.

“Our record in Cardiff hasn’t been one of the best and while we beat them in the World Cup, playing them at home is a different proposition.

“We expect to face a team that doesn’t go away, that peppers us with a good aerial game and our backline will be put to the test.

“But we have this week and next to get our ducks in a row and prepare for the battle we will face in Cardiff.” 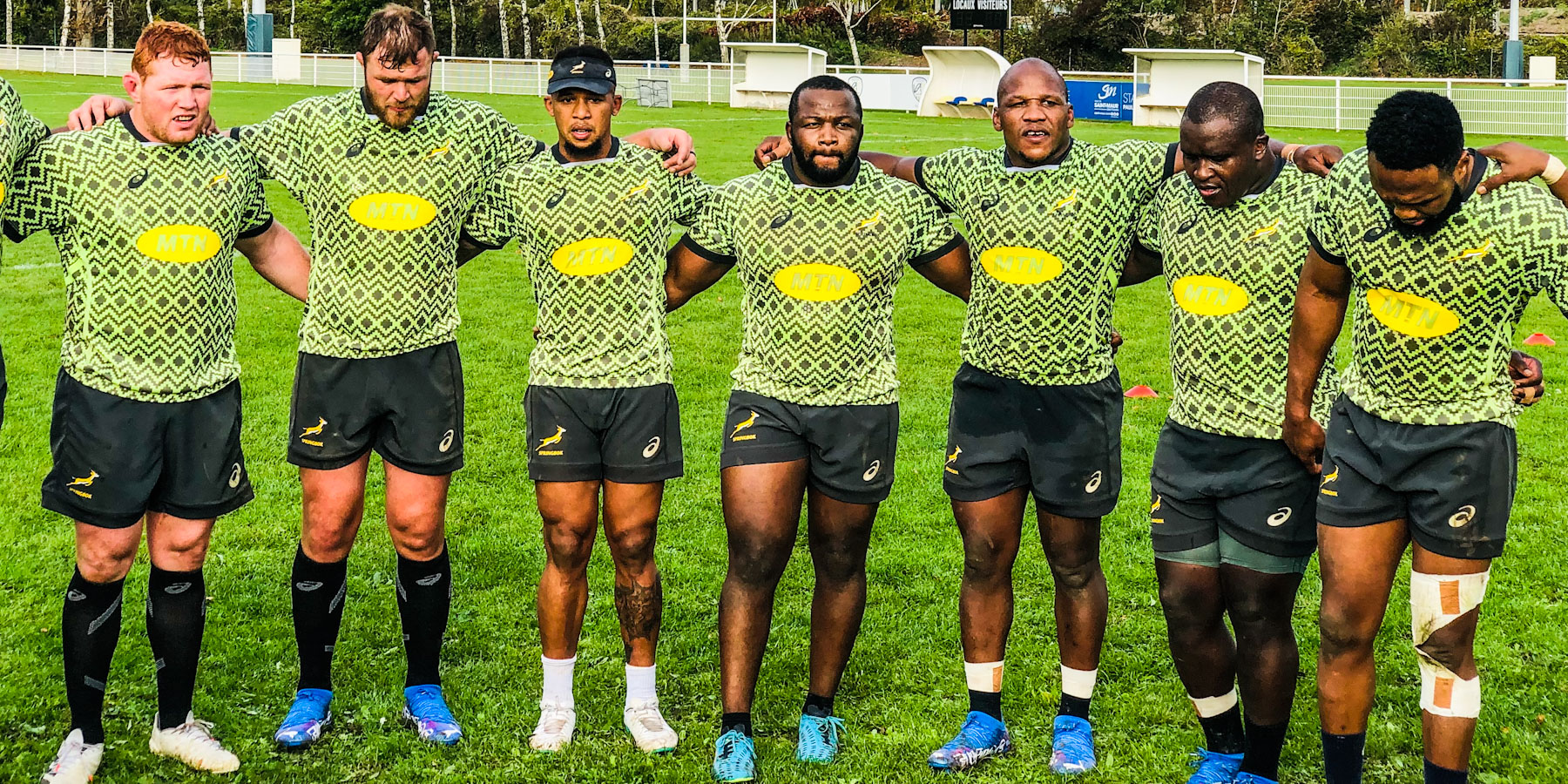 Team huddle after training in Paris.

Mbonambi elaborated saying they will face top class opposition in the Welsh team that is set to include a number of experienced international and British & Irish Lions players, including Alun Wyn Jones, Dan Biggar and Louis Rees-Zammit.

“It is never easy up here, and we’ve spoken about this in our team meetings. Jacques (Nienaber, Springbok coach) has brought it up but we don’t focus overly on it.

“We’re a real process-driven team and we need to make sure our processes work on this tour. That’s why we will take it day-by-day and team-by-team.”

Mbonambi highlighted the forward battle as one of the key areas they need to up for in the Test and said: “It’s going to be a massive forward battle, and we’re prepared that they’re going to come hard at us.

“I know we beat them in the World Cup, but they are always a tough side. Their forwards are quite tough, but they also have a good backline. We have a week to prepare and to get our ducks in a row.

“We know we are coming up against a massive forward battle, so we’re looking forward to it.

The team will depart for Cardiff on Sunday where they will be joined by the European-based players as they kick off the tour.

Springbok utility back Damian Willemse described starting his first Test at home in South Africa as “special” and said i...

Moerat and Louw in line for Springbok debuts...

Salmaan Moerat and Elrigh Louw are in line to make their Springbok debuts from the replacements bench against Wales in S...

Boks insist: "We will not underestimate Wales"...

Springbok assistant coach Deon Davids and prop Ox Nché insisted on Monday that they would not underestimate Wales as the...

Boks delighted to return to full stadiums against ...

More tickets to the Springboks’ six home Tests – starting with the Castle Lager Incoming Series against Wales next month...

The traditional start to the HSBC World Rugby Sevens Series has been restored with the 2022 season kicking off in Dubai in a month's time, and Neil Powell and his Springbok Sevens team are ready to travel and play.

“Chasing the Sun”, the five-part DSTV documentary showcasing the Springboks’ Rugby World Cup victory in Japan in 2019, has received another major gong when it walked away with Grand Prix and Gold awards for Branded Content Film at the 2021 Loeries Creative Week, hosted in Cape Town.

Salmaan Moerat described his call-up to the Springbok squad - he and Grant Williams (pictured above) are the only two uncapped players in the 32-man group - as special and said his goal in the next few weeks during the Castle Lager Outgoing Tour was to learn as much as possible and become a better rugby player.

It hasn’t taken long for Leinster to put a “business as usual” stamp on the inaugural Vodacom United Rugby Championship season, with their fellow Irish club Connacht and Welsh side Ospreys helping the men from Dublin take a significant step towards establishing their domination this past weekend.

Boks will approach UK Tour one match at a time

Springbok prop Steven Kitshoff says the team will enter the three-match Castle Lager Outgoing Tour with a realistic approach of taking each Test in their stride rather than targeting a clean sweep of wins for the first time since 2013 when they return to the field next weekend.

The Springbok Women squad departs South Africa on Sunday evening with great excitement and optimism, but also with a real sense of reality on what awaits them in France, Wales and England over next four weeks.