Nienaber explained that despite the early setbacks to their campaign, they were determined to find the solutions to whatever they encountered on what proved to be a series-winning campaign, the first for the Bok coach since he was appointed in 2020.

“Our attitude was ‘let's move on and find the solutions’,” said Nienaber.

“There was so much experience in the squad, so we could manage to get the work done in the end. Our biggest challenge was getting time to prepare – we had some COVID issues and had to sit in hotel rooms for a week. We lost a week, but there was never going to be time for excuses. We made it work.”

Springbok captain Siya Kolisi elaborated on the team’s motto: “I cannot explain in words – this group had so many challenges, with our first proper training just before the first Test.

“We decided though that there will be no excuses – people would not accept that anyway. We knew if we step onto the field, we needed to be ready to play,” added Kolisi.

Nienaber said the same happened on the field, with a number of substitutes making serious interventions, including Morné Steyn, who kicked two late penalty goals to clinch a pulsating third Test.

“I had my head down between my legs when he kicked that last penalty goal, to be honest – I just could not watch,” he admitted.

“It was just happy for him that he succeeded – it is amazing that he did the same thing 12 years ago. I also want to congratulate the other two flyhalves in the group – Handré Pollard was great during the series and Elton Jantjies was just amazing this week for us. He contributed so much, even after he knew he was not going to be involved in the third test.” 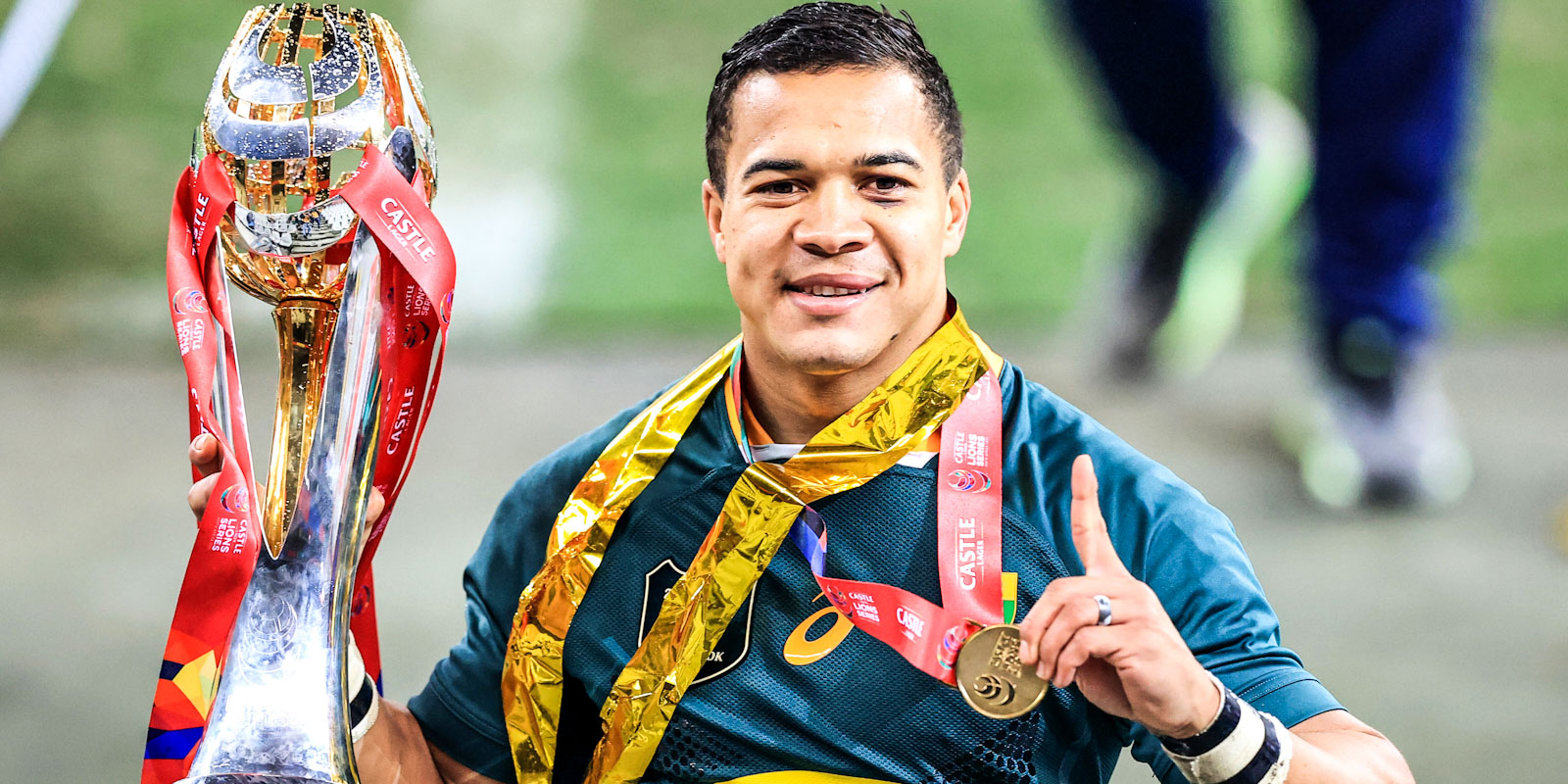 Man of the Match, Cheslin Kolbe.

Nienaber said he cannot claim the credit for the telling replacements for himself.

“It was a call made by the coaching staff, we sit high up in the box and can see some things happening and Rassie (Erasmus) is down there next to the field, and he also observes,” explained Nienaber.

“Then we chat and make a call. We were fortunate that our subs were spot on today.”

The Bok coach said the emotions on winning the series were profound: “The ebb and flow of the game was like the Rugby World Cup final all over again.

“We knew we had to hang in there and make sure every player stayed in the game. This was a serious test of decision-making and character, and we came through.”

Nienaber said they would enjoy the win, but that work for the Castle Lager Rugby Championship starts on Sunday, as the Boks take on Argentina in Nelson Mandela Bay next Saturday.

“We have done homework on Argentina already, because we knew it was going to be short turnaround. They are a very tough team, so tonight we enjoy, tomorrow we start again,” said Nienaber.

Kolisi said the coaching staff pressed the right emotional buttons with the players.

“You cannot motivate people anymore with rugby stories, what is driving everyone is what matters,” he said.

“They know how to get us up emotionally. It was easy to play for South Africa, although they were not here. People came out today on our way to the stadium. They did not have to, but still they came to wish us luck. You cannot let them down.”

Kolisi applauded Cheslin Kolbe and the backline players on their efforts: “Cheslin does not use many opportunities – today he just needed one. Willie (le Roux) was another – the backs came through when we needed them.”

According to Kolisi, the Boks will be ready next week for Argentina: “The character of the team - the guys who could not play kept on supporting – that attitude came through. We have a good work ethic. We find solutions and will be ready for next week.”

The Sigma Lions had to withstand a ferocious Tafel Lager Griquas onslaught in the second half of their Carling Currie Cup clash in Kimberley on Friday, but held on for a nail-biting 45-42 win over their Northern Cape rivals.

Sharks blitz Bulls to soar to the summit

A Grant Williams-inspired Cell C Sharks side rediscovered their attacking edge to clinch a 35-28 victory over the Vodacom Bulls in Durban on Friday night.

Relive the action from the Lions Series decider

It was a humdinger of note, but in the end the Springboks did enough to secure victory in the third and final Test in the Castle Lager Lions Series.

The Springboks arrived in Nelson Mandela Bay on Sunday with their focus set firmly on the Castle Lager Rugby Championship against Argentina, Australia and New Zealand.

It was a proper try-fest in the Carling Currie Cup Premier Division this weekend, with 28 five-pointers scored in three matches, indicating a clear attacking mindset amongst the six teams in action in Kimberley, Durban and Cape Town.

Boks in the right mindset as Argentina preparations kick off

The celebrations are over and the Springboks are ready to dive into the Castle Lager Rugby Championship following their series win against the British & Irish Lions.