The Boks had their captains run on Friday morning for the spectacle that kicks off at 18h00 at the Cape Town Stadium on Saturday and will be broadcast live on SuperSport, and while Kolisi said there were some comparisons between the Rugby World Cup final in 2019 and this match, this occasion was unique.

“It’s definitely similar to the Rugby World Cup final, but at the same time it’s different because this is the last opportunity for some of us to play against the British & Irish Lions, and that has been our mentality as a team this week,” said Kolisi.

“We’re prepared mentally and we have worked hard off the field and on the field to fix the things we had to work on from our last game.

“This is a unique opportunity for both teams, and it is massive to participate in this series, so we are looking forward to it and, hopefully to finishing strongly.

“Obviously we would have loved to have crowds at the game, but it will still be special.”

Kolisi added: “This is the position we wanted to be in and now we are here, and this match counts the most. What happened before doesn’t.

“This is the match we want to remember.”

Stick (assistant coach) expected yet another battle of attrition as both teams are expected to use their physicality to gain ascendancy, and he said the aerial battle would also be decisive. 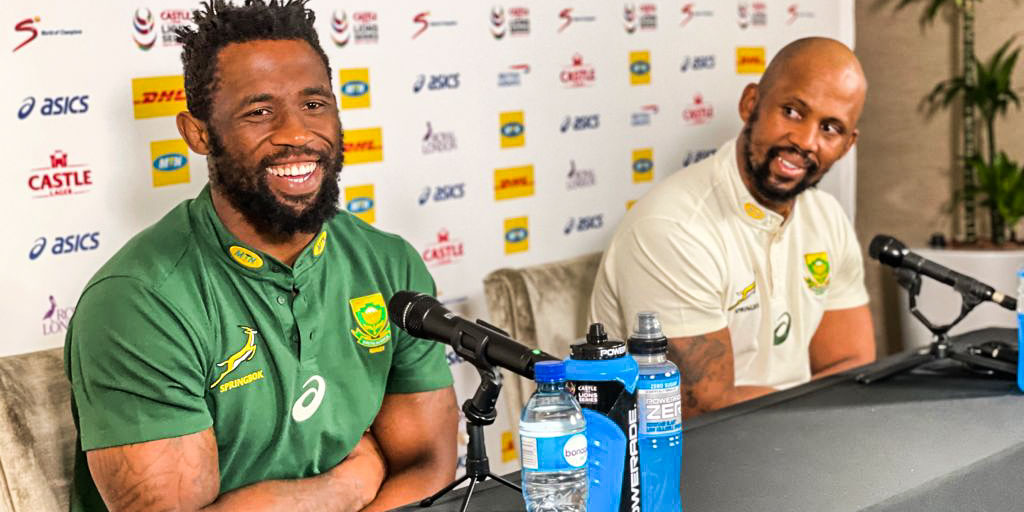 Siya Kolisi and Mzwandile Stick face the media on Friday.

“We have done a lot of this work this week to find out more about the players we will be up against,” said Stick.

“In our last match we felt we were up there physically for 80 minutes. They have made a few changes this week. Guys like Bandee Aki and Robbie Henshaw (Lions centres) are very physical, and Liam Williams (fullback) and Josh Adams (winger) who are also in their backline have been playing together for a while now for Wales, which shows that they are trying to select their best combinations.

“One thing I can guarantee is that they will be at their best tomorrow when it comes to the physical side of the game. But we won’t focus too much on that. We need to make sure we are better than we were last week.”

Stick added: “The aerial contest will be massive, and we said that from the outset (of the series). One can even if one look back at the Lions Series against the All Blacks in 2017.

Stick said one of the main focus areas for the team this week was on proper recovery after the two physically demanding Test so far, and that they saw this match as a final.

“This game is like a final and we are excited and pleased with the way the team adapted (to the challenges faced in the last few weeks),” said Stick. “The team that adjusts the best to the conditions and uses their opportunities will win the game.”

Damian de Allende will run out for his 50th Bok cap on Saturday, but the match will also mark a significant day for Springbok replacement flyhalf Morné Steyn, who will not only earn his first Test cap since 2016, but also the rare achievement of facing the British & Irish Lions in successive tours.

Steyn slotted the penalty goal that sealed the Castle Lager Lions Series victory for the Springboks in 2009, and Kolisi was delighted to see him make an impact in the match.

“Morné has been amazing - his energy and how he loves the game is the same as when I met him for the first time in 2013," said Kolisi.

“He’s still hungry to play, and it’s fantastic that he is getting this opportunity. He has 66 Test caps, so he has vast experience and the ability to calm everyone down, and his wisdom will be valuable this week.”

It was dejavu when Morné Steyn kicked a match-winning penalty goal two minutes from time to earn the Springboks a 19-16 win over the British & Irish Lions in their third and final Test at Cape Town Stadium on Saturday, with the pivot's kick ensuring a 2-1 win in the Castle Lager Lions Series.

DHL Western Province staged a stunning second-half fightback to claim a crucial 40-39 win over the Toyota Cheetahs at Newlands on Saturday afternoon to bolster their Carling Currie Cup playoff aspirations.

Relive the action from the Lions Series decider

It was a humdinger of note, but in the end the Springboks did enough to secure victory in the third and final Test in the Castle Lager Lions Series.