Team South Africa’s Blitzboks started the tournament impressively with a five-try romp over Ireland in their opening match in Tokyo Stadium for a 33-14 victory, but they had to trust their defensive system to subdue Kenya 14-5 in their second match.

South African coach Renfred Dazel said their objectives for the opening day had been achieved.

“We finished the day with two wins out of two and although the win over Kenya was a scrappy affair, we will take it and move on to day two,” said Dazel.

“We have not played at this level for quite some time now, so the guys did well considering the circumstances we found ourselves in.”

There was a huge smile and much relief for Ronald Brown, with the playmaker making his international debut for South Africa at the Olympics. He was the only uncapped player in the side.

“It was a huge relief to finally get onto the field and contribute. It was worth the wait for sure,” a smiling Brown said.

For Impi Visser, a try scorer against Ireland, the Kenyan effort was expected: “Against Kenya you can always expect a tight affair, especially in the set pieces. We lost two lineouts, which was disappointing, as that will always put you on the back foot. Overall, we are two out of two and that is rewarding.”

“It was a great feeling running out, but it is all about the team effort in the end,” said Du Preez.

“We played well against Ireland, but it was not our best effort against Kenya. We could not hold on to the ball and became involved in a dog fight with them. We are certainly better than that, but we are happy with two wins.” 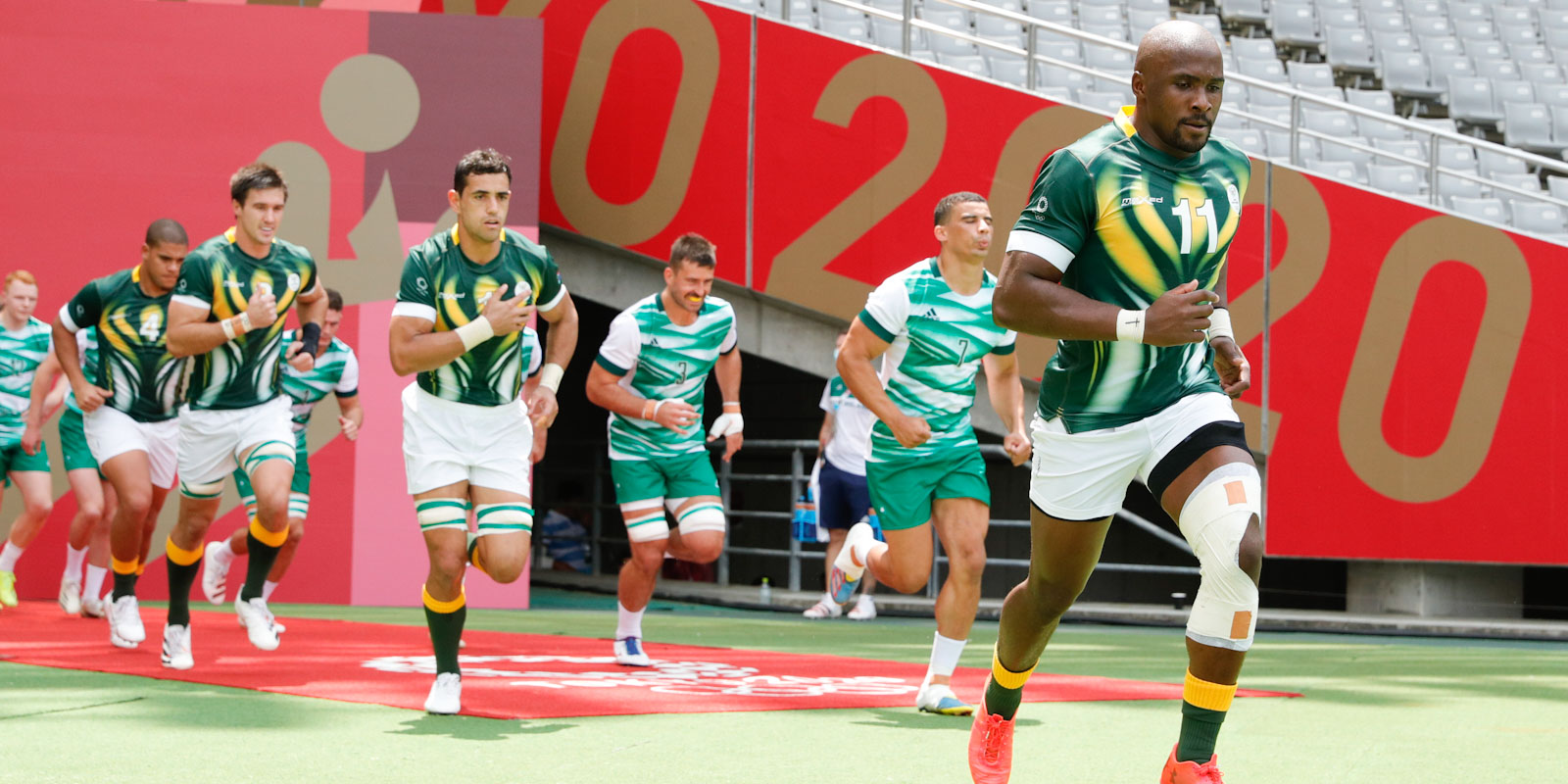 Siviwe Soyizwapi leading the team onto the field against Ireland.

Two early tries, by Selvyn Davids and Siviwe Soyizwapi, helped the men in green and gold to jump into a 14-0 lead against Kenya, but the East African side pulled one back via Collins Injera just before the break to see the South Africans go into the break leading by 14-5.

Where Davids’ try was more down to a proper team effort, Soyizwapi’s five-pointer was worth a replay as he bounced off three defenders on his way to his first try at the Olympics.

The second half became a physical affair, with Kenya having most of the possession, but a number of crucial tackles and turnovers prevented them from crossing the South African line again.

The Blitzbok bench proved valuable in this regard, with Sako Makata making two crucial stops for his team. 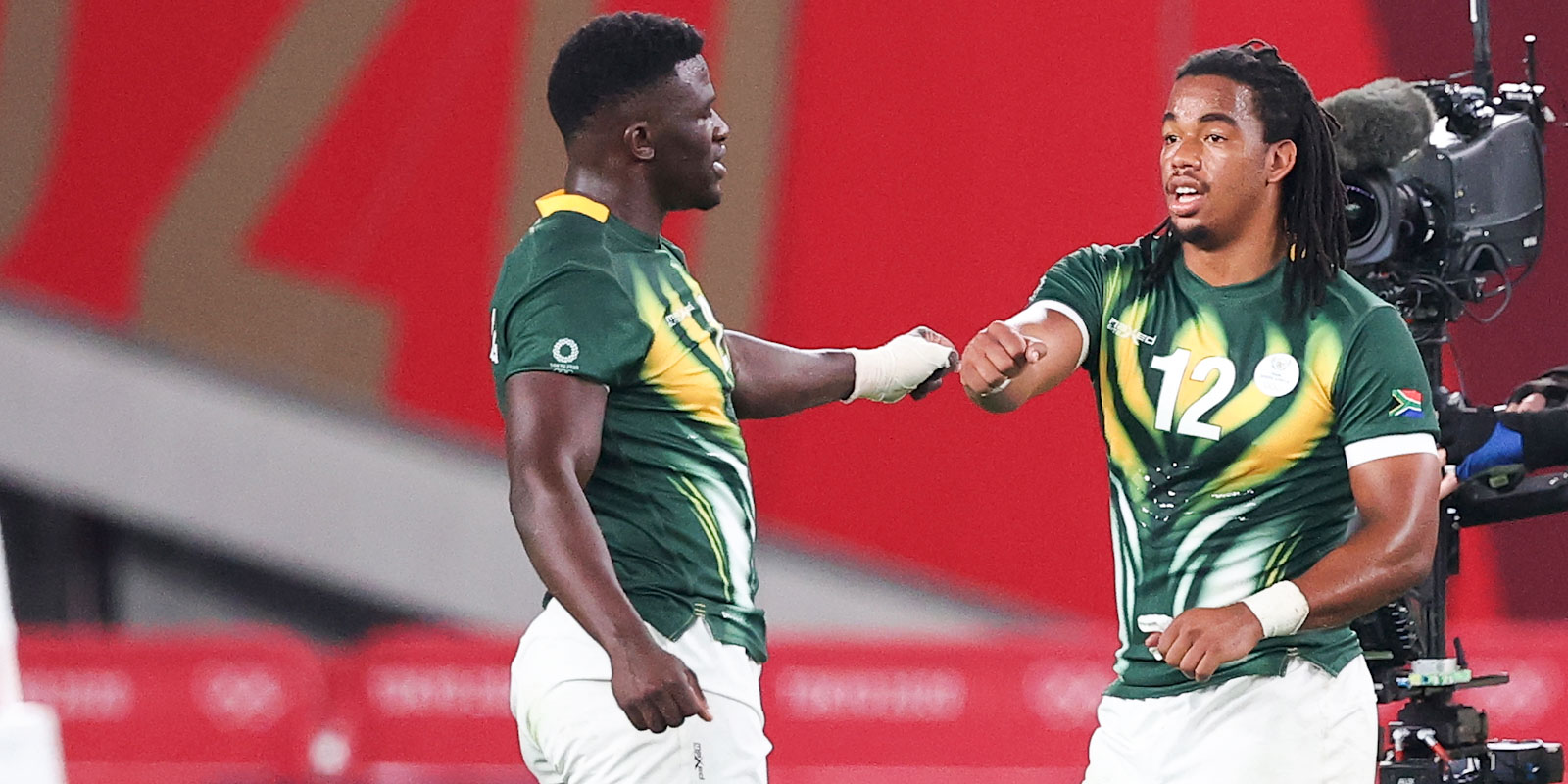 Sako Makata and Stedman Gans happy with undefeated record on Day One.

Earlier on Monday, South Africa scored five tries to beat Ireland 33-14 and kick off their Pool C campaign with a solid performance.

The Blitzboks scored two first half tries for a 14-7 lead at the break and added another three in the second for a strong start to their campaign.

Zain Davids opened the scoring try for the Blitzboks before Visser added a second try with less than six minutes gone. At this stage the South African defence had Ireland under pressure, but Gavin Mullin got Ireland on the board before the break.

However, it was South Africa who struck first in the second half as Justin Geduld rose highest to claim a cross-field kick and dot down.

The try was just reward for Geduld, who kicked deep from inside his 22 and thanks to a good chase, the ball was eventually recycled, with Geduld outjumping the Irish defence.

Terry Kennedy grabbed his first Olympic try to give Ireland hope of a comeback, but the Blitzboks made sure of victory with an expertly taken try by Chris Dry, in the same corner where Geduld had scored.

That proved to be a happy spot for South Africa, with a late try from Stedman Gans in the same corner. Selvyn Davids converted four out of five tries.

South Africa have won 50 times against the USA, with the North American side securing seven wins and one draw since they first met on the sevens field in 2000.

The last time the sides met was in Vancouver in 2020, where South Africa won 26-10, and they are on a six-match winning streak over the Americans.

The Mastercard Golden Lions Women successfully defended the Women’s First Division title they won two years ago when they beat Free State in the final in Johannesburg on Saturday, setting up an opportunity to get promoted to the Premier Division next year.

Relive the action from the first Lions Test

It wasn't the result the Boks had hoped for, but it was a classic as the British & Irish Lions won the opening Test of the Castle Lager Lions Series by 22-17 in Cape Town.

WP bounce back in style in Nelspruit

Tristan Leyds scored two tries as DHL Western Province bounced back in style with a hard-fought 37-23 Carling Currie Cup victory over the New Nation Pumas in Nelspruit on Sunday, after leading by 16-10 at the break.

Half-century up for Kitshoff as Wiese starts for Boks

Springbok prop Steven Kitshoff will earn his 50th Test cap at the Cape Town Stadium on Saturday in the second Test of the Castle Lager Lions Series, with Jasper Wiese named at No 8 in this crucial clash between South Africa and the British & Irish Lions.

SA Rugby announced on Tuesday that all amateur and club rugby, currently suspended across the country due to COVID regulations, will be permitted to resume on 2 August following detailed reviews by the various provincial unions and if teams have implemented the return to play safety guidelines.

British & Irish Lions Head Coach, Warren Gatland, has made three changes to the starting XV which beat the Springboks last Saturday to take a 1-0 lead in the Castle Lager Lions Series.