The South Africans outplayed Australia (22-19) and the USA (28-7) on the final day of the Rugby Sevens tournament played at Tokyo Stadium and recovered well from Tuesday's quarter-final defeat to Argentina, when they were knocked out of the race to the podium at the Olympics.

The Blitzboks bounced back to the form that saw them as one of the pre-tournament favourites and they ended the tournament with five wins from six matches and an average score of 21-12, but unfortunately no medal.

Fiji (gold), New Zealand (silver) and Argentina (bronze) were on the podium, with Great Britain and South Africa finishing fourth and fifth respectively.

Powell said he was grateful to be part of the Olympics, even if only for one match. The Blitzbok coach had tested positive for COVID during their training camp in Kagoshima and had to stay in quarantine until this morning, when he departed the southern city and linked up with the squad just before their final match against the USA.

“I am very grateful indeed, even if it was just for the last match,” said Powell.

“Obviously, we did not plan it like this, but that is life, it is not always perfect, challenges come across your way, and you need to adapt. It is not always a fairy tale.”

Powell felt the team won back some respect with their two victories on Wednesday: “The character and fightback were important, we needed to show some fight and what we stand for as a team.

“We spoke about that today – that we wanted to leave with our heads held high and our standards restored. We needed to make the jersey proud again and I am really pleased that we managed that and there were many good outcomes,” said Powell, adding that the players deserve a lot of credit for the way they responded after their quarter-final defeat.

On his own plight, Powell said he tried to stay positive: “It was tough to watch from afar. If you think it is tough to sit next to the field and assist the guys, but this was much worse because you cannot really contribute to their effort on the field, and it was nerve-racking and stressful.”

For the experienced Chris Dry, the comeback effort was very pleasing.

“We needed to show who we are today and what the jersey stands for – that one poor performance could not define us as a group, and I think we showed that today,” said Dry.

“Nothing will take away the disappointment of that quarter-final result, but at least we finished on a strong and positive note today.”

It was most likely Dry's Blitzbok swansong, as his national contract ends this month.

“I have no regrets, only massive gratitude for all the opportunities that came my way. I am very pleased we could finish on a high,” he said. 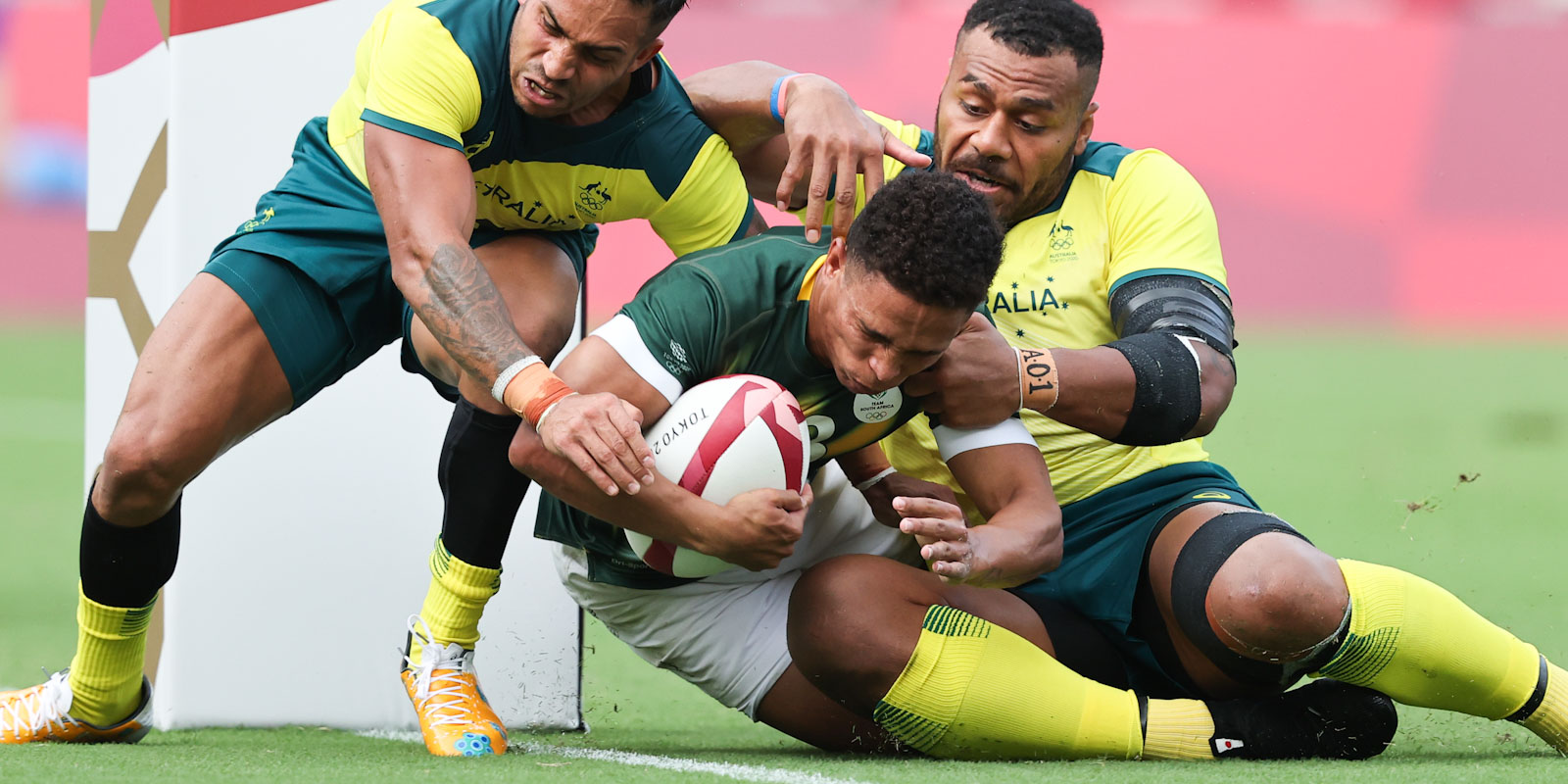 In the USA clash, very strong defence had the Americans in trouble from the start and when they spilled the ball due to the pressure applied, Justin Geduld was an early beneficiary to score under the posts for an early 7-0 lead.

The USA rebounded when Geduld slipped a tackle, but the seven-point buffer was restored just before the break when Sako Makata dotted down for a converted try.

The second half saw a tense opening couple of minutes. Both defences remained tight despite the tired legs, but a Kurt-Lee Arendse intervention opened up the gap to 14 points. The centre showed good footwork to outfox the USA defence and his converted try all but secured the win.

Stedman Gans then finished the match with a well-taken try, with some delightful stepping by the midfielder securing a final try and a 28-7 win. Ronald Brown and Branco du Preez both kicked two conversions.

In the opening match on Wednesday, against Australia in the fifth-place semi-final, the first try came from wing Siviwe Soyizwapi, with the South African captain finishing off some patience on attack.

The 5-0 lead became 10-0 and then 17-0 at halftime courtesy of two tries by Brown, who started in his first match for South Africa. Geduld converted the second try.

Australia came back strongly in the second half, scoring twice to cut the lead to five points, but a strong run by JC Pretorius eased the Blitzboks out to 22-12. Australia breached the SA line once more, but that was it and the Blitzboks walked off victors by 22-19.

Springbok Sevens coach Neil Powell can’t wait for some form of normality to return when the Blitzboks start the defence ...

The Springbok Sevens won a fourth HSBC World Rugby Sevens Series when they completed the North American double by winnin...

Clean slate for Blitzboks in Edmonton...

The Springbok Sevens team topped Pool A after the opening day of the HSBC Canada Sevens at Edmonton’s Commonwealth Stadi...

Half-century up for Kitshoff as Wiese starts for Boks

Springbok prop Steven Kitshoff will earn his 50th Test cap at the Cape Town Stadium on Saturday in the second Test of the Castle Lager Lions Series, with Jasper Wiese named at No 8 in this crucial clash between South Africa and the British & Irish Lions.

SA Rugby announced on Tuesday that all amateur and club rugby, currently suspended across the country due to COVID regulations, will be permitted to resume on 2 August following detailed reviews by the various provincial unions and if teams have implemented the return to play safety guidelines.

British & Irish Lions Head Coach, Warren Gatland, has made three changes to the starting XV which beat the Springboks last Saturday to take a 1-0 lead in the Castle Lager Lions Series.

The SA Rugby Under-20 Cup competition kicks off on the first weekend of August, with all the participating teams ready to give their all to make it to the playoffs in October.

Being part of the 2020 Olympic Games in Tokyo is an experience he will treasure forever, even though it included some lows with the obvious highs for Springbok Sevens playmaker Selvyn Davids.

Springbok Women’s players Zintle Mpupha, Lusanda Dumke and Chumisa Qawe joined rugby fans across the country in backing the Boks by creating a personalised banner in the build up to the crucial second Test between Siya Kolisi’s charges and the British & Irish Lions in Cape Town on Saturday.