The midfielder starred and scored in his team’s 33-26 win over Argentina last Wednesday and will again start against the Europeans, who are still looking for a first win following defeats against Argentina and Uruguay.

Junior Bok head coach Bafana Nhleko opted for a vastly different team from the one that beat Uruguay and Argentina, resting a number of players, including the complete leadership group of George Cronje (No 8), Jordan Hendrikse (flyhalf) and Sasko Ndlovu (flanker), all of whom have been included on the extended bench.

As a result, Jacques Goosen (hooker) will lead the team, with Van Wyk deputising.

“We were going to give everyone a run anyway, so the changes are all in line with our planning and a decision we took at the beginning of the competition,” said Nhleko.

“We also needed to manage some players’ game time, as most of them have not played rugby for quite a while. This will be a wonderful opportunity for those getting a first start to experience test rugby at U20 level, while others will be able to build on the improving performances we have seen from the group.”

“I am very happy for Mambo and Sacha to make their debuts and starting at that,” said Nhleko.

“Both worked extremely hard when they were not part of the playing squad and contributed well in their supporting roles. They now have the chance to shine, and I believe they will do very well.” 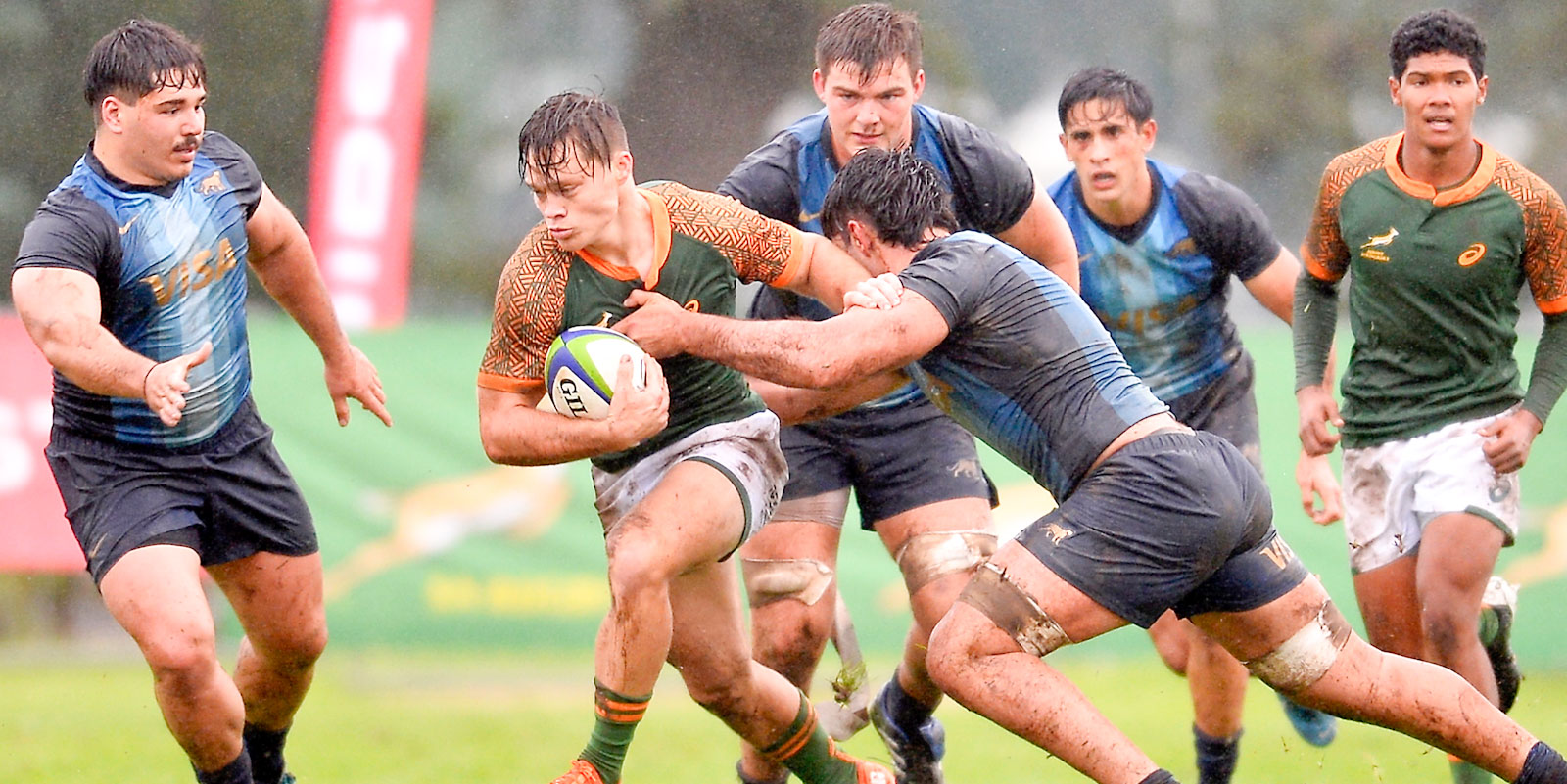 Quan Horn on attack for the Junior Springboks.

Nhleko said his decision to entrust Goosen with the captaincy duties was an easy one: “Jacques captained SA Schools two years ago and Henco was captain of SA Schools Sevens, so both bring good leadership to the squad, especially with the official leadership group only involved in the match only later on.”

Nhleko believes the Georgians will test his side, despite defeats in their previous two pool matches.

“It looked like they got tired in the second half of both those matches, so we will look to play at a high tempo,” he said.

“Except for the two debutants, everyone in our squad had either started a match or played from the bench in both games so they will know how to handle the intensity and how to manage our game plan.

“We will focus on how we want to play, but what we have seen from them so far is that patience on attack will be key. They are a hard team to break down, so we must keep plugging away until they fall off the pace of the game.”

Meanwhile, the Junior Boks will be without impressive wing Canan Moodie, who has been ruled out for the remainder of the tournament after sustaining a jaw fracture against Argentina. Prop Jan-Hendrik Wessels is rested for the match against Georgia, but will be ready next Saturday, when the final two matches of the series will be played.

Ireland's Conor Murray has been handed the captaincy for the Castle Lager Lions Series after Alun Wyn Jones was ruled out of the tour due to injury yesterday, while Warren Gatland has also called up two Welshmen as late replacements for the trip to South Africa.

Bonus-point victories in the Carling Currie Cup saw the Vodacom Bulls and Tafel Lager Griquas return to winning ways after disappointing starts to their Premier Division campaigns last weekend, but it’s still early days and with two big clashes scheduled for Wednesday, the competition will soon hit a new gear.

Team effort above anything else for Siya Ningiza

Have you heard of the young man, called Siya from the Eastern Cape, who is contracted at the Cell C Sharks and plays flank for his country?

The Springboks were not caught by complete surprise with the announcement that Conor Murray has been chosen to lead the British & Irish Lions after Alun Wyn Jones was ruled out due to injury.

Ireland's Conor Murray has been handed the captaincy for the Castle Lager Lions Series after Alun Wyn Jones was ruled out of the tour due to injury yesterday, while Warren Gatland has also called up two Welshmen as late replacements for the trip to South Africa.