The DHL Stormers kicked off the restart of the Vodacom United Rugby Championship with a comfortable 36-19 win over Welsh side Scarlets at a windswept DHL Stadium on Friday evening in Cape Town.

The defending champions – playing without eight of their Springboks – scored five tries, four conversions and a penalty goal to their opponents’ three tries and two conversions.

There were tries galore in the entertaining first half, with the Cape side scoring four times and restricting the visitors to just one score.

Home flyhalf, Kade Wolhuter, converted three of those tries and slotted a penalty goal to hand them a comfortable 29-7 halfway lead.

Scrumhalf Herschel Jantjies opened the scoring for the winning side when he went over under the poles after he sold  couple of defenders a big dummy. Jantjies come onto the field as replacement for wing Angelo Davids who went off with a cut on the forehead. Davids returned later on with a heavy bandage around the head.

The home side had to wait until the quarter hour mark to open the scoring, when first Jantjies and then prolific wing Leolin Zas scored in quick succession to hand them a 14-0 advantage.

The tournament champions were now getting into their stride and lock Ernst van Rhyn used his big frame to power over for their third try in a profitable ten-minute spell, during which time they managed to build a 19-0 lead. 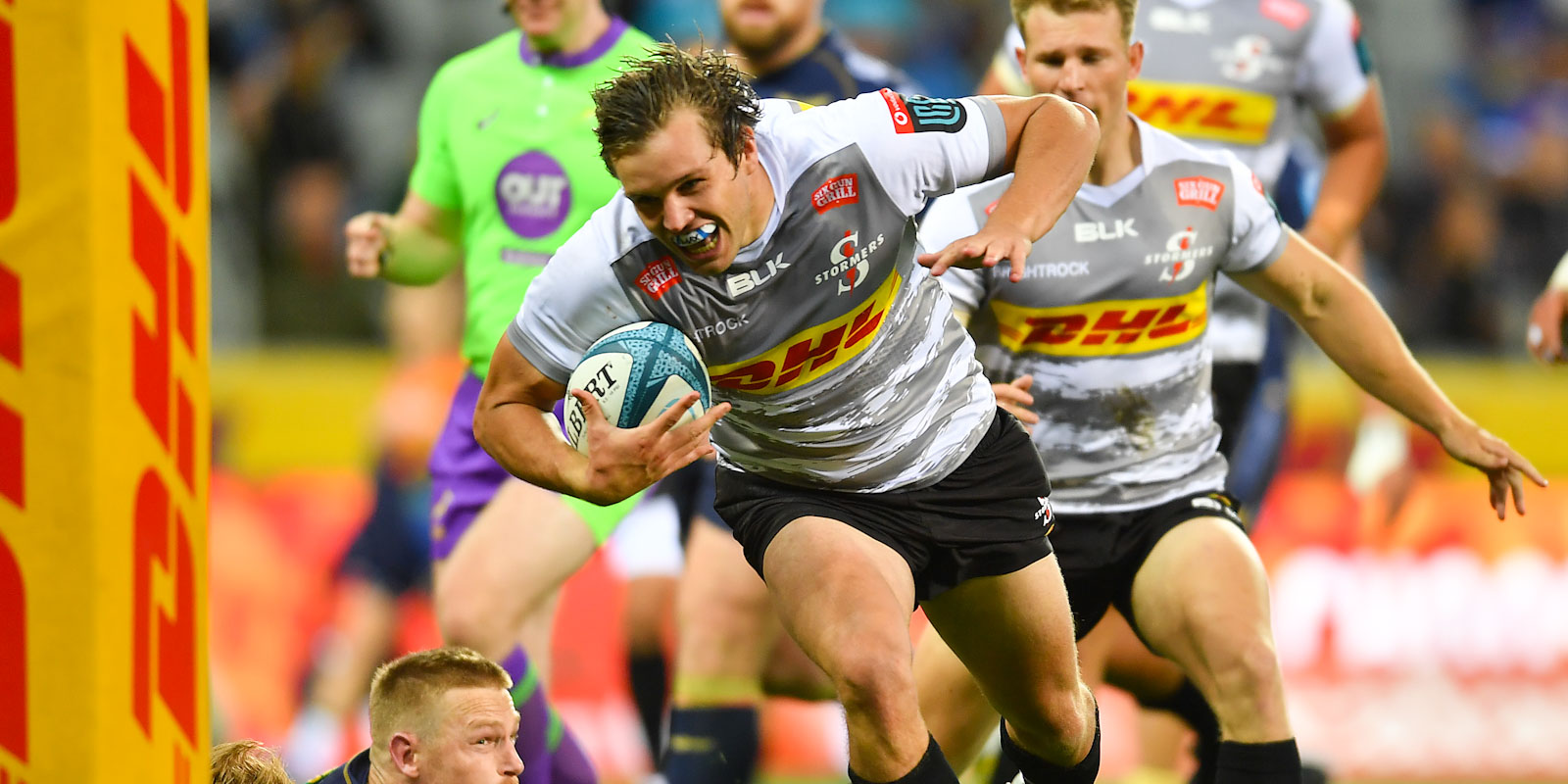 Dan du Plessis on his way to score for the DHL Stormers.

However, the visiting side hit back with a converted try of their own through Ryan Conbeer, who rounded off a slick move to pull to score back to 19-7.

The home side scored their fourth try to bag the vital bonus point when lively No 8 Hacjivah Dayimani managed to beat a couple of defenders enroute to his converted try as they stretched the lead to 26-7.

Wolhuter added a penalty goal on the stroke of halftime to make the score 29-7 as the teams went off the field after that kick for the break.

Inside centre Dan du Plessis then crossed over just two minutes after the restart as the home side cut the touring side’s defense wide open with their offloading game to make the score 36-7.

However, the visitors showed they too can be dangerous on attack, and in a lovely movement, they created the overlap for right wing Tom Rogers to run in for their second converted try.

And he was soon followed by Conbeer, who crossed over out wide for his second try of the evening as the visiting side showed lots of fight to stay in the game. Replacement Rhys Patchell succeeded with one of the conversions to make the score 36-19, but the home side managed to keep the visitors at bay for another solid win.

Springbok coach Jacques Nienaber and captain Siya Kolisi praised the team for their brave effort to earn their first win over England at Twickenham since 2014, and their first personal victories in London as they registered a rewarding 27-13 victory on Saturday.

The Vodacom Bulls scored a convincing 43-26 win over the Ospreys in their Vodacom United Rugby Championship match at Loftus Versfeld in Pretoria on Saturday, scoring seven tries in the process and showing that they are not a one-trick pony.