Boks win but come up short in title chase in Durban

The Springboks finished the Castle Lager Rugby Championship like they started it, with a win – this time by 38-21 (halftime 17-7) over Argentina – but they failed to score the points needed to dethrone New Zealand as champions of the Southern Hemisphere, in front of a packed house of 45982 people at Hollywoodbets Kings Park in Durban.

After the All Blacks beat the Wallabies by 40-14 in Auckland on Saturday morning, the Boks had to win with a bonus point and a points' difference of at least 39, and they failed on both accounts, but still finished the competition with four wins from six games, the same as New Zealand.

The Boks dominated the first half and built up a well-deserved 17-7 lead but Argentina never allowed the home side to run away with proceedings and managed to stay in the fight throughout, although their discipline got the better of them as illustrated by the four yellow cards dished out to the visitors for an assortment of transgressions, while the Boks had two men sent to the sin bin in a stop-start affair that was played in tricky conditions.

Experienced lock Eben Etzebeth thought he had scored when he went over in the 10th minute, however, he received the ball from an offside position in the maul and the try was ruled out.

Not long thereafter, Pumas flank Marcos Kremer was yellow carded for offside play with the Boks on the attack. The green and gold jerseys finally got onto the scoreboard through hard-working No 8 Jasper Wiese, who had the simple task to dot the ball down from a powerful Bok scrum. 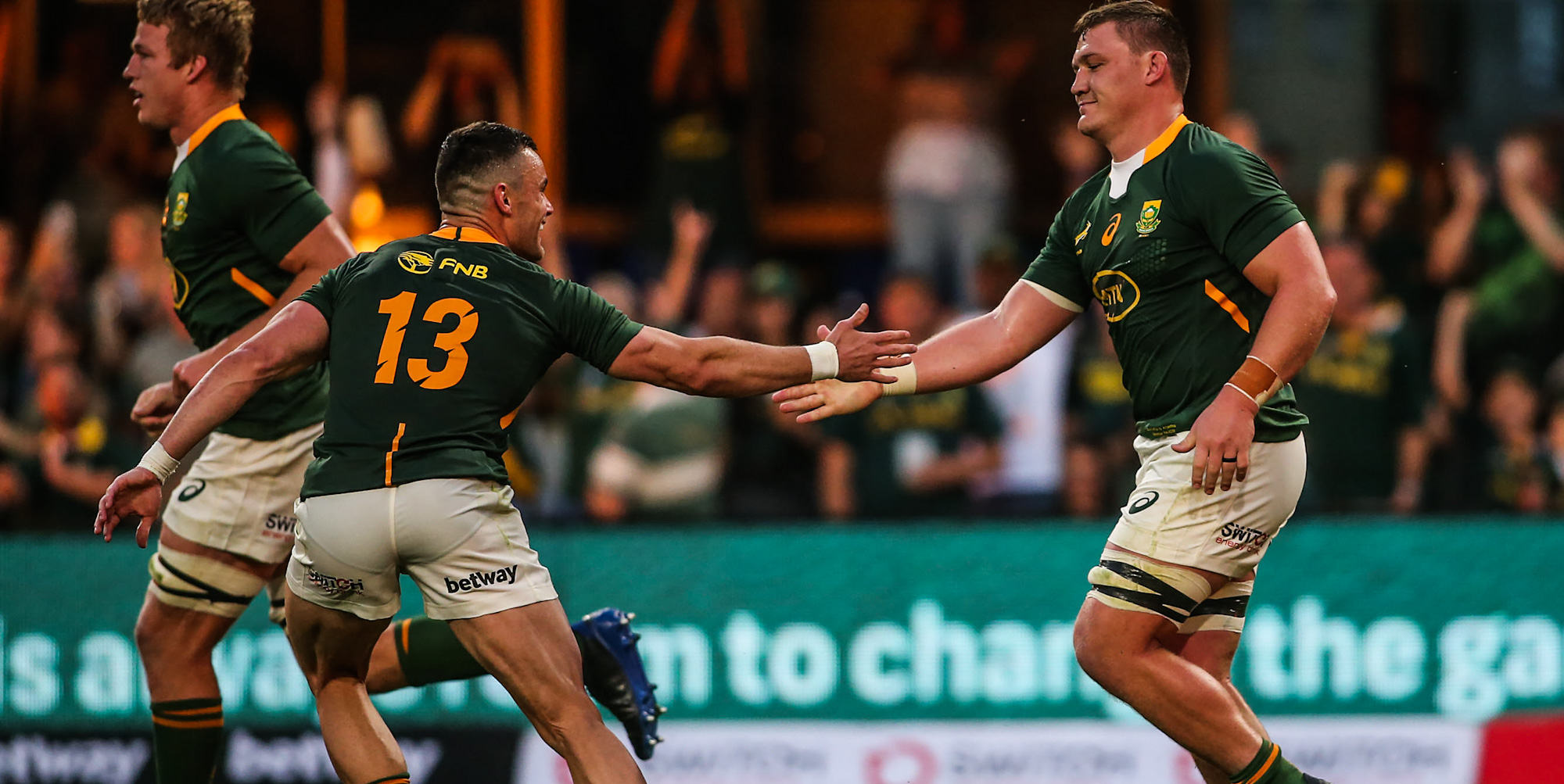 Jasper Wiese was the Man of the Match and scored his first Test try in Durban.

Steyn’s conversion handed the home side a well-deserved 7-0 lead at the halfway mark of the opening half. With the Boks making Argentina sweat on defence and piling on the pressure upfront, Juan Martin Gonzalez was also sent to the sin bin for repeated offsides, while Willie le Roux was held up on the whitewash in the next movement.

However, the South Africans kept piling on the pressure and it was no surprise when skipper Siya Kolisi went over following another powerful lineout maul to hand his side a 14-0 lead.

Steyn, playing at flyhalf for the Boks for the first time since 2008, then slotted a long range penalty kick to make it 17-0.

However, the South Americans scored their first try on the stroke of halftime through scrumhalf Gonzalo Bertranou, which Emiliano Boffelli converted to make the score at the break 17-7.

The Pumas came back strongly in the second half and Juan Martín González got their second try seven minutes after the restart as he raced past Le Roux to score out wide. When Boffelli slotted the difficult conversion, he narrowed the deficit to 17-14.

Both teams then made numerous changes, with the Springboks sending on Duane Vermeulen and Kwagga Smith, amongst others, in an effort to continue their dominance upfront. The Bok forwards then forced their first penalty try as they mauled powerfully towards the Argentine goal line, and Jeronimo de la Fuente was issued a yellow card his indiscretion during that movement. 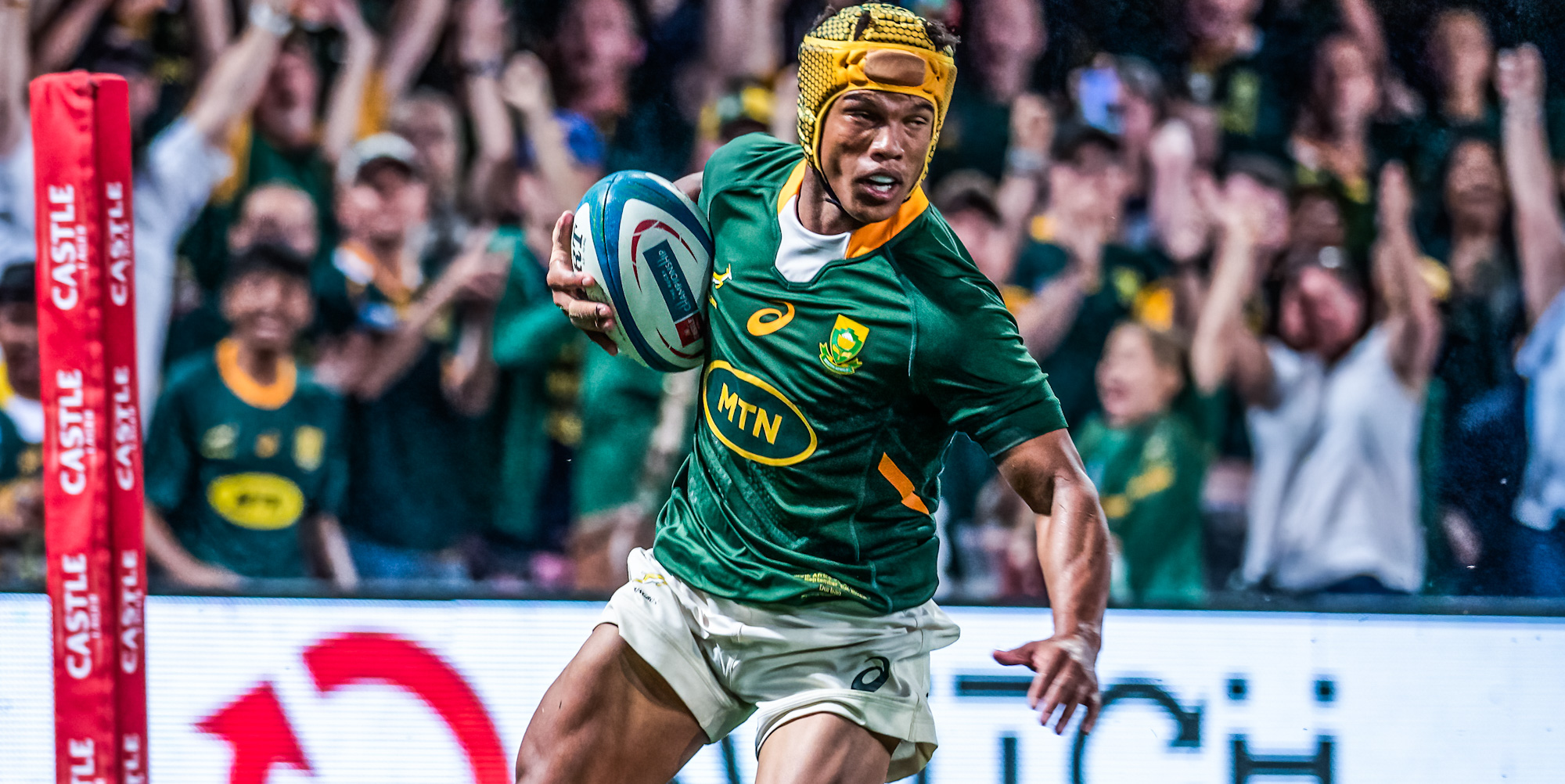 Etzebeth was then yellow carded for dangerous play, with both sides now playing with 14 men and with rain falling down, the Boks had to fight hard to keep their 24-14 lead intact.

However, the Boks were then down to 13 men when replacement scrumhalf Faf de Klerk was shown yellow for a cynical offence, which stopped a goal-bound Argentine maul.

Matias Moroni then scored out side, with Boffelli's conversion pulling the Pumas back to within three points and time running out on the clock, but the Boks still had some gas left in the tank and got themselves into a strong field position.

Launching yet another maul at the Argentinean tryline, Pumas reserve prop Joel Sclavi also got his marching orders after trying to stop a maul illegally, and the Boks were awarded a second penalty try in the process, which allowed the South Africans some breathing space with the score now 31-21 in their favour and less than 10 minutes left on the clock.

With time up, replacement wing Kurt-Lee Arendse was sent over for the Boks’ fifth try - and his second in only his third Test - with speedsters Makazole Mapimpi and Canan Moodie both featuring prominently. Steyn added the extras for the Springboks to record their fourth win of the campaign.

One more show on the big stage for Zenay Jordaan

The Springbok Women will depart on their Rugby World Cup campaign in New Zealand on Saturday with various emotions and expectations, including nervous anticipation. For the most experienced player in the group, Zenay Jordaan, though, there will an overriding emotion – that of gratitude.

“Fear the Fin” is the new slogan of the Cell C Sharks and for a while there, there was blood in the water as Zebre Parma conceded four unanswered tries in the first half before providing a fright of their own with an astonishing second half fightback before the visitors slunk home 42-37 (halftime 28-10) in a Vodacom United Rugby Championship victory in Italy on Friday night.

Springbok utility back Johan Goosen will make a welcome return to action this weekend when he runs out at fullback for the Vodacom Bulls in their second round Vodacom United Rugby Championship clash against Edinburgh in Pretoria on Saturday.

Hartzenberg and Blommetjies on Stormers debut

Clayton Blommetjies (fullback) and Junior Springbok centre Suleiman Hartzenberg will both make their DHL Stormers debut in the Vodacom United Rugby Championship opener against Connacht in Stellenbosch on Saturday.

With the Castle Lager Rugby Championship for 2022 a thing of the past, the Springboks are keen to carry the winning momentum they built up in the last three Tests into their year-end tour in November following, their final round victory by 38-21 against Argentina in Durban on Saturday.

The DHL Stormers started the defence of their Vodacom United Rugby Championship title in perfect fashion with a bonus-point win, and although the three other South African teams had their supporters on the edge of their seats, the Emirates Lions, Vodacom Bulls and Cell C Sharks came away with tight victories on a perfect weekend for the four teams from the Republic.

Trailblazing Ngwevu on a clear mission in NZ

It was a travel weary and tired Springbok Women squad that was handed their room keys to their Auckland hotel in the early hours of Monday morning as they arrived for Rugby World Cup 2021, but inside centre Aphiwe Ngwevu’s smile was there for all to see.

Springbok utility back Kurt-Lee Arendse expected the Boks to face another tough test when they embark on their traditional year-end tour to Europe in November, and he hoped to be in the selection mix after making a comeback against Argentina last Saturday.

With the Castle Lager Rugby Championship for 2022 a thing of the past, the Springboks are keen to carry the winning momentum they built up in the last three Tests into their year-end tour in November following, their final round victory by 38-21 against Argentina in Durban on Saturday.