The Wallabies defeated the Springboks by 25-17 (halftime 10-3) despite a strong finish by the South Africans, with Kwagga Smith scoring two tries in the final 10 minutes of their third round Castle Lager Rugby Championship match played in bright winter sunshine in Adelaide on Saturday morning (SA time).

The Wallabies went into the halftime break with a 10-3 lead following a converted try and a penalty goal, while South Africa replied with a single penalty goal despite their dominance in the set piece, territory and the penalty count in their favour.

A string of basic errors in the first half meant the Springboks could never get into their stride, while the Wallabies made a perfect, fast start to the game which set the tone for their first-half performance; 40 minutes of rugby the Springboks would rather forget.

After conceding a converted try in the opening two minutes and then a penalty goal soon afterwards, the visitors found themselves 10-0 behind with hardly a hand laid on the ball during that period.

From a Springbok mistake with the kick-off, Australia beautifully took the ball through a couple of phases and flanker Fraser McReight rounded off a quick start with a converted try next to the posts. Moments later, when flyhalf Noah Lolesio slotted a close ranged penalty goal following a South African high tackle, the Wallabies were 10-0 up within five minutes.

Hooker Joseph Dweba left the field in the 11th minute with a cut above the eye, and Malcolm Marx came on while the starting hooker received stiches for his head wound. Handre Pollard, who slotted 10 consecutive kicks in his previous two matches, steered his first penalty attempt wide of the upright. 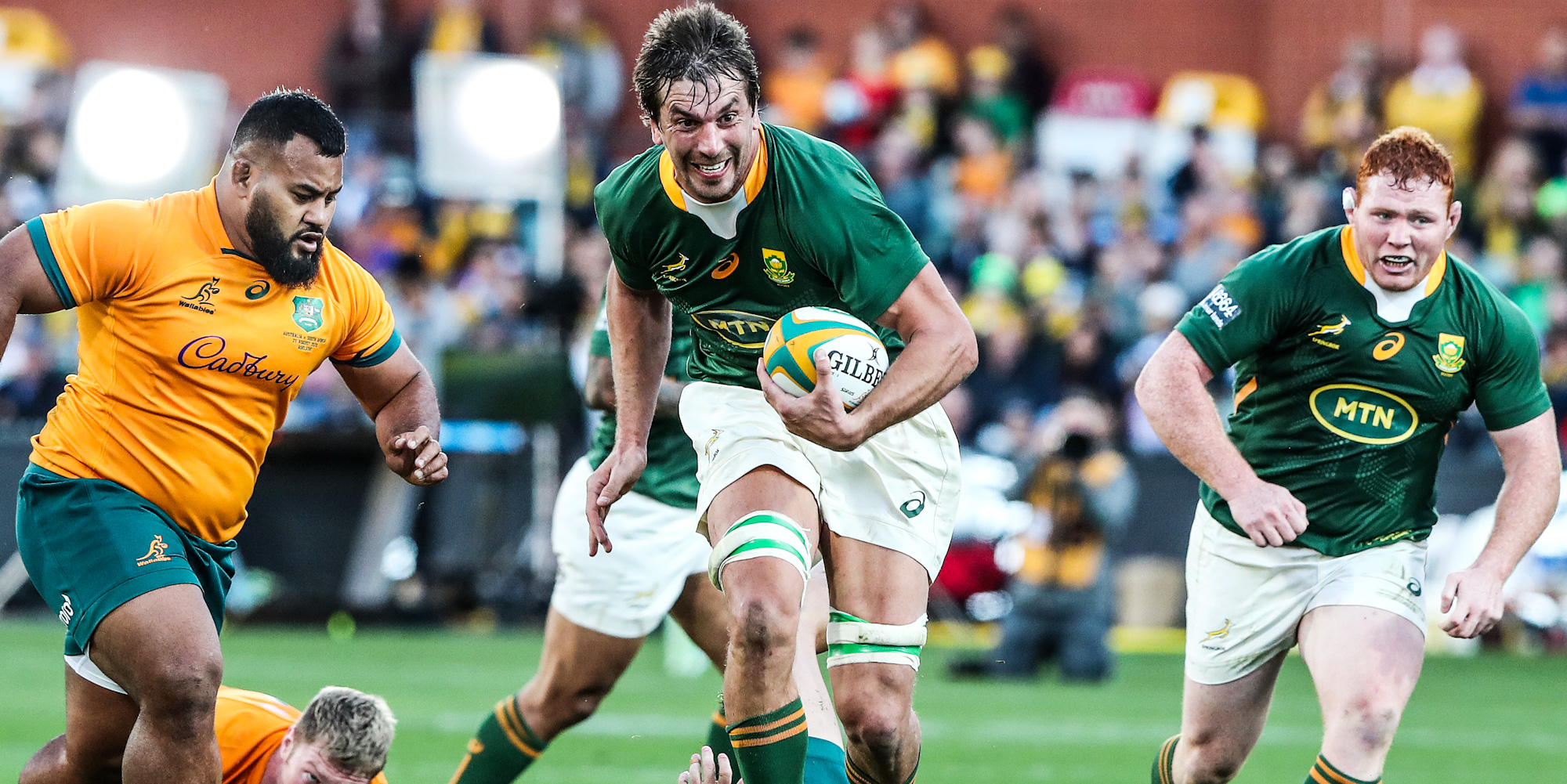 Eben Etzebeth put in yet another massive shift in his 103rd Test.

When the Boks finally got some passes going and ventured into the Wallaby danger zone, they committed several handling errors which relieved the pressure on the Australians.

Pollard pulled another penalty kick when the Wallabies were penalised at scrum time, but he had no problem with his third attempt a few minutes later to finally put the Boks on the scoreboard at 10-3.

With the Boks now getting good go-forward ball, Wallaby right wing Tom Wright was yellow carded for going offside when SA took a quick tap penalty five meters from his goal line, but again the visitors failed to capitalise as they conceded a penalty from an attacking scrum.

The men in Green and Gold were now in control at the set piece and they generated a lot of scoring opportunities, but frustratingly, they were unable to convert those because of numerous errors, but the hosts also defended well, as was the case when wing Makazole Mapimpi was stopped in his tracks with the try line in sight by a desperate Marika Koroibete tackle.

To make matters worse for the Boks, scrumhalf Faf de Klerk was yellow carded for foul play on opposite number Nic White just before the break, and the Wallabies took advantage of that with an extra man on the field early in the second half.

After the break, Koroibete scored the Wallabies’ second try of the match when he showed good footwork to step Pollard and dive over. Lolesio hit the upright with his conversion, but the Wallabies had stretched their lead to 15-3 just seven minutes after the break. 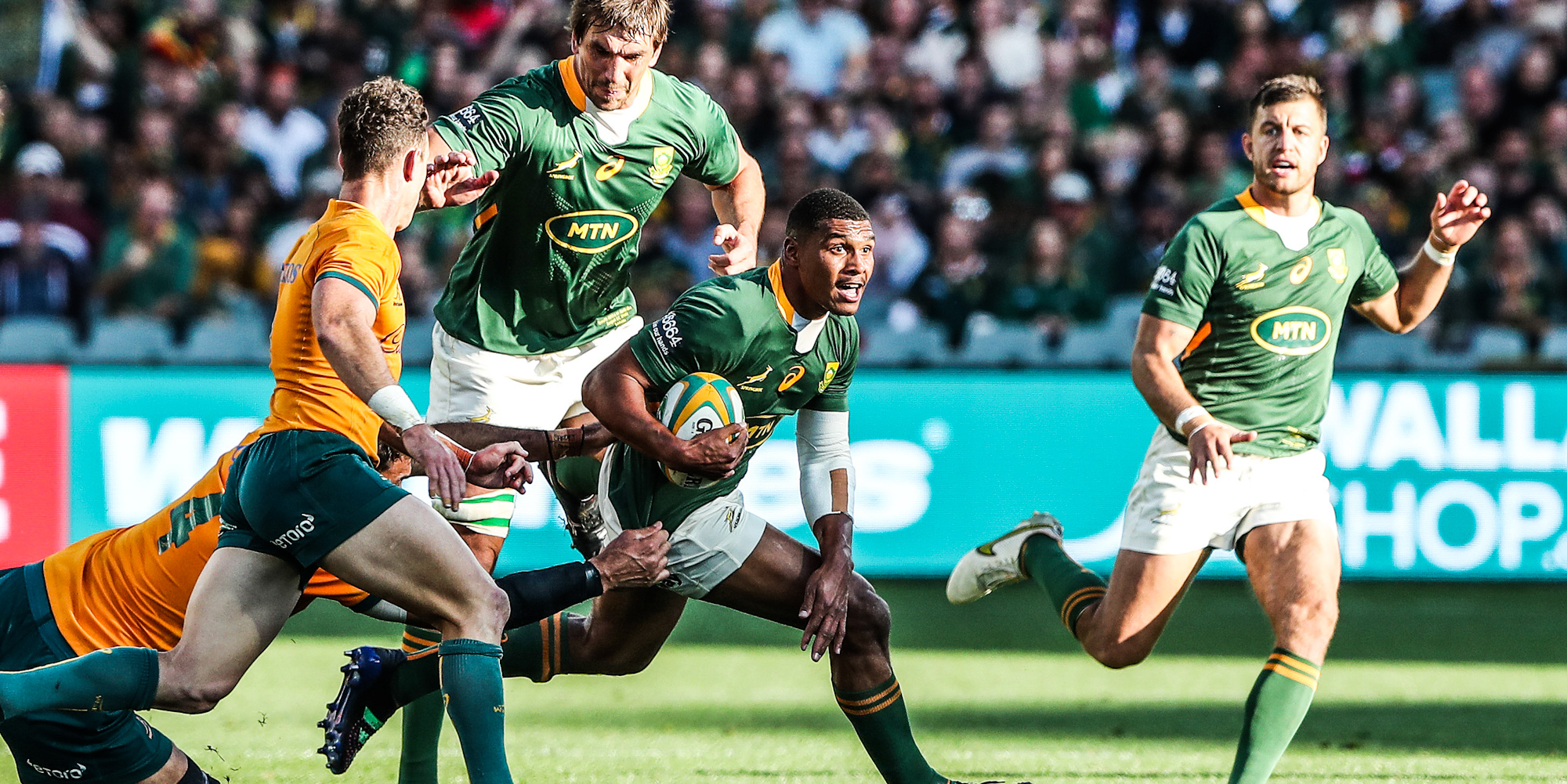 Damian Willemse looks for a gap with support from Eben Etzebeth and Handre Pollard.

Springbok Jacques Nienaber sent on Marx, Steven Kitshoff, Kwagga Smith, Franco Mostert, Frans Steyn, Jaden Hendrikse and Elton Jantjies as replacements in the second half in an effort to lift the tempo.

But it was the Wallabies who kept the scorers busy when McReight ran in for his second try of the game. The flanker was on hand to take a pass from his flyhalf after a clever inside pass to score next to the sticks and with Lolesio adding the extras, the Boks were left with a mountain to climb at 22-3 and only 20 minutes of play remaining.

Jantjies was then unfortunately pinned on the wrong side of a ruck after having made a tackle, and Lolesio hit the mark with his second penalty goal attempt as he took the Wallabies’ advantage to 25-3.

The Boks looked for a strong finish and finally scored their first try, initiated by Kitshoff and fellow front-ranker Koch, who sent replacement No 8 Smith over for a try converted by Jantjies.

The South Africans kept on going and when Wallaby No 8 Rob Valetini was yellow carded for a cynical foul towards the end, Smith took a quick tap penalty to dive over for his second try of the game, which Jaden Hendrikse converted.

However the fightback came too late as the Wallabies left the pitch as 25-17 winners, and South Africa now must go back to the drawing board for next week’s rematch in Sydney.

Discipline and focus key as Boks prepare for Wallabies outing

Springbok captain Siya Kolisi emphasised the importance of good discipline and remaining focused for the full 80 minutes in their Castle Lager Rugby Championship clash against Australia at the Adelaide Oval on Saturday after the team wrapped up their preparations with the captains run on Friday.

One game at a time in LA for the Blitzboks

The cut-throat nature of the HSBC World Rugby Sevens Series and the unpredictability of every match played will best be displayed at Dignity Health Sports Park in Los Angeles on Saturday and Sunday when four teams will chase the overall crown for the 2022 season.

Boks desperate to bounce back in Sydney

Springbok loose forward Kwagga Smith and centre Lukhanyo Am said the team were desperate to turn things around in their second Castle Lager Rugby Championship clash against Australia in Sydney next weekend, with Smith stressing that they were still in the running to win the competition after three rounds.

A lack of defensive cohesion and an under-powered team effort led to the Springbok Sevens team dropping out of Cup contention at the HSBC LA Sevens on Saturday, something that was very disappointing to coach Neil Powell.

Springbok prop Steven Kitshoff and assistant coach Deon Davids remained confident in the team's abilities despite suffering back-to-back defeats in the Castle Lager Rugby Championship and said they believe they can turn the corner.

Light at the end of LA tunnel for the Blitzboks

Springbok Sevens coach Neil Powell would be forgiven if he wanted to block from his mind his squad’s performance at the weekend’s HSBC LA Sevens, where the Blitzboks finished 13th, the lowest placed finish since Powell took charge 10 years ago.

Discipline and focus key as Boks prepare for Wallabies outing

Springbok captain Siya Kolisi emphasised the importance of good discipline and remaining focused for the full 80 minutes in their Castle Lager Rugby Championship clash against Australia at the Adelaide Oval on Saturday after the team wrapped up their preparations with the captains run on Friday.

Boks desperate to bounce back in Sydney

Springbok loose forward Kwagga Smith and centre Lukhanyo Am said the team were desperate to turn things around in their second Castle Lager Rugby Championship clash against Australia in Sydney next weekend, with Smith stressing that they were still in the running to win the competition after three rounds.