Junior Springbok No 8 Cameron Hanekom is loving every minute of his Under-20 Six Nations Summer Series expedition in the sun-soaked Italian city Verona, where the South Africans are competing with the Six Nations teams alongside fellow invited country Georgia.

With the COVID-19 pandemic meaning the traditional U20 World Rugby Championship was cancelled for 2022 – it was last staged in 2019 – World Rugby and the Six Nations are staging the Summer Series in Italy to offer the next generation of rugby players an opportunity to compete at international level.

The SA U20s prepared for their Italian job by completing a gruelling three-month SA Rugby Academy programme in Stellenbosch, where the extended group were drilled into competition mode by adding training matches against the more experienced local Carling Currie Cup teams such as DHL Western Province, the Toyota Cheetahs and Windhoek Draught Griquas.

But it is in Verona, by playing against their peers from Europe, where the Junior Boks are able to accurately gauge their performances, on a competitive stage where rugby’s future starts are giving their first meaning steps into international rugby.

And judging by their two outings so far, the Junior Boks are proving to be very competitive as they are setting the pace in their difficult pool consisting of England, Ireland and France, who won the U20 world championship the last time it was held.

Hanekom and his team-mates opened their group commitments with a solid 30-22 win over the powerful England, and they followed that up with a 33-24 triumph over Ireland –who claimed the U20 Six Nations and Grand Slam with an unbeaten run.

The Vodacom Bulls loose forward has been one of the Junior Boks’ standout players so far in a dominating pack of forwards. In their opener against England he played for 73 minutes, scored one try, made 107 meters from the eight carries with the ball in hand, took two throws at the back of the lineout and made a 100 percent tackle rate completion – pretty much a classic No 8 performance. 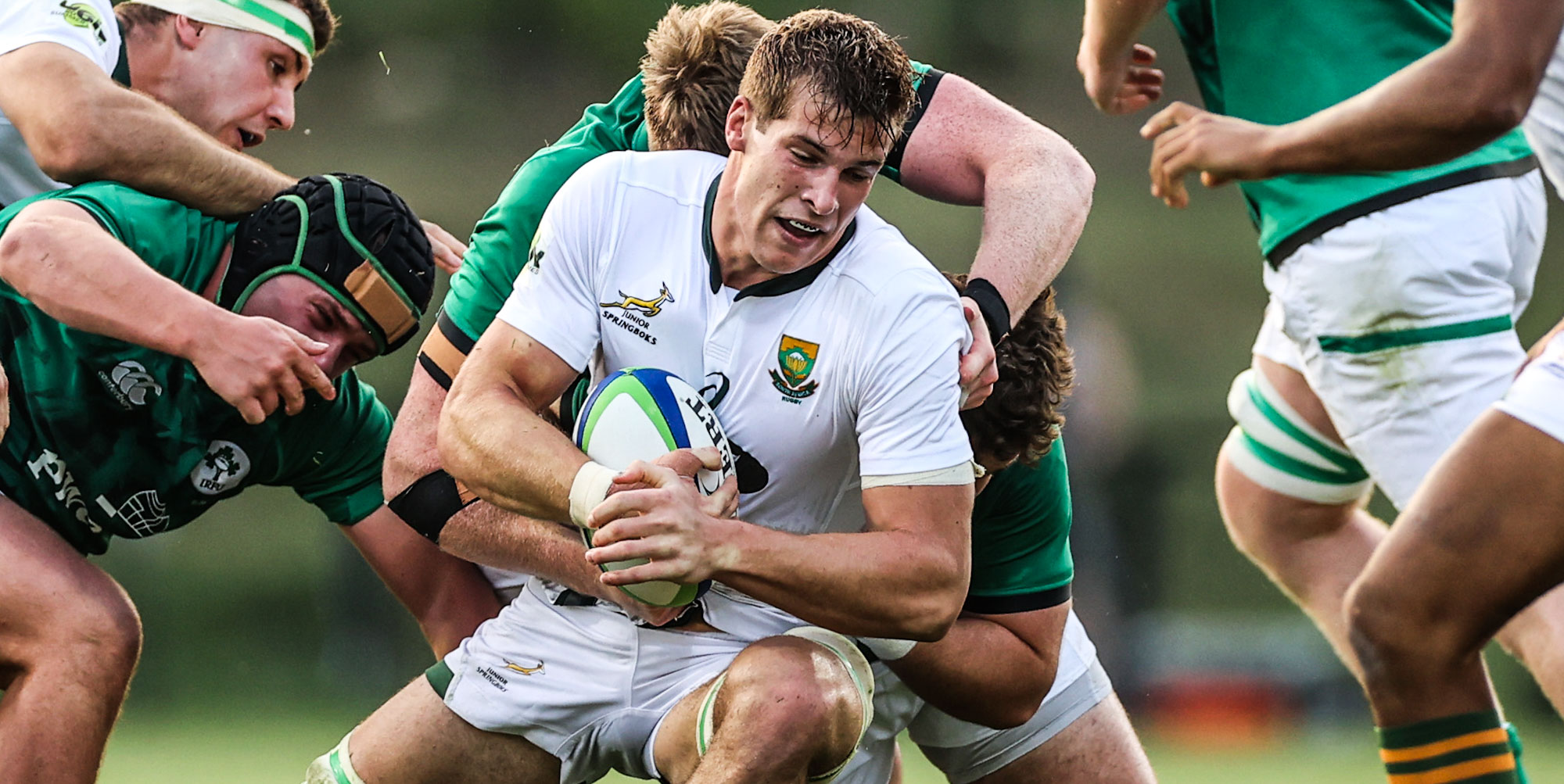 Cameron Hanekom in action against Ireland.

Hanekom was one of only two forwards retained in the starting line-up for the second pool match against Ireland as coach Bafana Nhleko freshened up his pack, with two more games to come in mind.

And once again, the soft-spoken, hardworking Hanekom impressed with his positional play, lineout skills and a penchant for sniffing out the ball close to the opposing try line by scoring one of his team’s five tries against the Irish. Interestingly, all of the South Africans five pointers were dotted down by their dominating forwards, four of which came inside the first 35 minutes as the Junior Boks raced into a 26-3 halftime lead.

And, once more, Hanekom completed a perfect tackling performance in the first half before he was replaced on the stroke of halftime by Siya Ningiza.

Hanekom credits their hard work during their Stellenbosch camp for their winning performances so far in the Summer Series.

“The camp as SAS was tough, very demanding, and laid the foundation for our Summer Series preparations,” said Hanekom.

Like for so many of the players, the Summer Series is his first visit overseas, but the young South Africans have quickly made their mark amongst quality international opposition.

“It’s nice and hot out here – but we told each other we are only going to focus on the stuff that we can control,” he said with a beaming smile.

“England brought a lot of physicality, as we expected, and we were able to dominate things at contact time, which helped us against both of the teams. 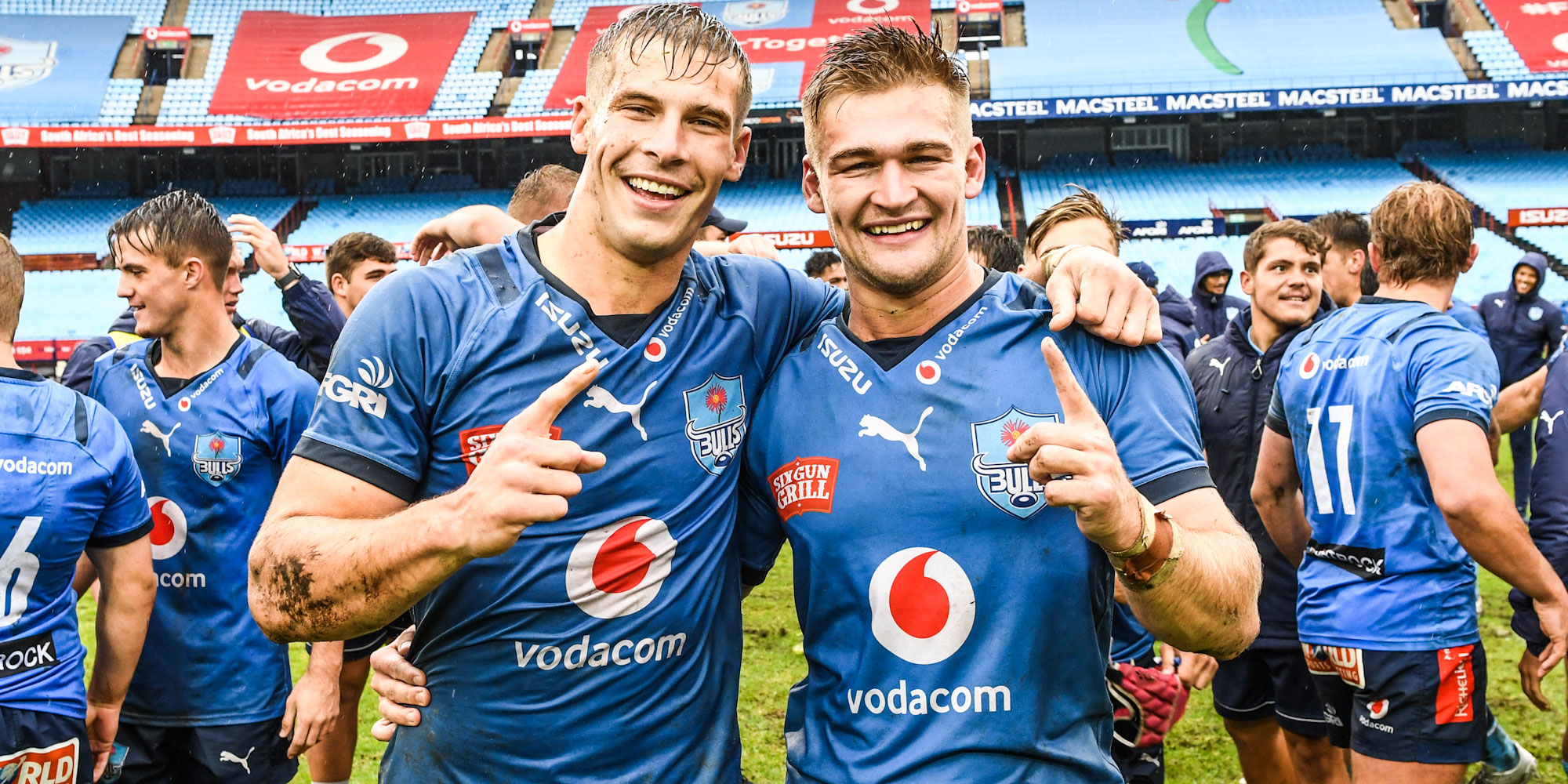 “For our next game against France, we just have to keep on working harder. The standard of play here is definitely much higher, with much more intensity than we are used to in our domestic U20 tournament,” he said, adding the players are keen to grab the opportunity to learn and grow with both hands as they have to learn to adapt faster to the pressurised match situations.

“It is good to experience because I believe it helps us to prepare for our move onto senior rugby,” he said.

The 20-year-old was born in Somerset-West in the Western Cape and attended Paarl Boys’ High School before making the trek up north to sign with the Vodacom Bulls, where he featured prominently in the SA U20 Cup competition.

His road to the Junior Boks started in 2019 already, when he was drafted into the Under-17 Elite Player Development programme – SA Rugby’s player pathway for top age-group players – and at the beginning of 2022 he cracked the nod for the SA Rugby Academy programme, which was followed by selection for the Junior Boks’ Summer Series participation in Verona.

Hanekom honed his ball winning skills as a competent wrestler, earning national colours in the eight years whilst competing the sport, while he also earned U17 WP Sevens colours. He made his debut in the U20 competition for the Vodacom Bulls in 2021, followed by his first appearance in the Carling Currie Cup earlier this year.

Unsurprisingly, given his position in the team, Hanekom lists experienced Springbok No 8 Duane Vermeulen as his role model, while he describes Vermeulen’s RWC-winning Bok team-mate Cheslin Kolbe as his favourite sportsperson.

Hanekom concluded by saying they are eyeing two improved performances at the Summer Series, as the Junior Boks prepare to face what will be a tricky encounter against the unpredictable French U20 side.

“We are loving the tour, but the boys are firmly focussed on finishing the Series by playing much better rugby. While we have been winning, we haven’t been playing to our full potential yet,” said Hanekom.

France have ended their Under-18 International Series campaign on a winning note with a 20-15 (halftime 12-12) victory o...

SA U18s hope to sign off in style on Saturday...

The South African Under-18 teams are aiming for improved performances when they wrap up the U18 International Series aga...

The South African Under-18s are the only unbeaten team left in SA Rugby’s U18 International Series after an impressive v...

Boks will be ready for any eventuality against Wales

Springbok No 8 Jasper Wiese and hooker Bongi Mbonambi said the team were ready to adapt to anything that Wales may throw at them in the opening Test of the Castle Lager Incoming Series at Loftus Versfeld in Pretoria on Saturday, and that they believed in their systems and the coaches’ plans.

Junior Springbok coach Bafana Nhleko was a happy man after his team won their second pool game at the U20 Six Nations Summer Series in Italy when they beat Ireland by 33-24 in Verona on Wednesday evening.

Wales head coach Wayne Pivac has named their team to play South Africa at Loftus Versfeld, Pretoria in the opening match of the Castle Lager Incoming Series on Saturday.

Second half performance what Boks were looking for

A relieved Springbok coach Jacques Nienaber praised his composed team as they overturned a 15-point halftime deficit to record a 32-29 victory over Wales at a packed Loftus Versfeld in the first match of the three-Test Castle Lager Incoming Series on Saturday.

Carling Champions Team too good for Italy A

It wasn’t 2021 all over again as the Carling Champions Team had to work hard for a 31-27 victory over a tough Italian ‘A’ side at the Nelson Mandela Bay Stadium on Saturday night, after the visitors led by 17-10 at the break of the second annual Carling Champions Match.

Boks will be ready for any eventuality against Wales

Springbok No 8 Jasper Wiese and hooker Bongi Mbonambi said the team were ready to adapt to anything that Wales may throw at them in the opening Test of the Castle Lager Incoming Series at Loftus Versfeld in Pretoria on Saturday, and that they believed in their systems and the coaches’ plans.