Pumas down Cheetahs to stay in semi-final hunt

After stacking up an impressive unbeaten run of nine wins on the trot, the Airlink Pumas handed the Toyota Cheetahs their second straight defeat when the Lowvelders won an exciting Carling Currie Cup clash by 29-28 in Bloemfontein on Friday night.

The visitors led 14-7 at halftime after making the most of their first-half scoring chances.

Although the result will have little effect on the second-placed Free Staters, who collected two points to move to 43 on the log, the outcome was a hugely important one for the side from Mpumalanga, who moved into fourth place on the league table with 27 points, although it might only be temporarily.

The Airlink Pumas will be hoping that the Sigma Lions can repeat their winning act of last weekend when they take on the Cell C Sharks (24 points) in the weekend’s remaining fixture in Durban on Saturday afternoon.

Toyota Cheetahs captain Ruan Pienaar, in his 50th match in the white jersey, landed all four conversions as he kept his side in contention, however, he missed with a crucial long-range penalty close to the end which would have been the match-winning points. His opposite kicker, midfielder Eddie Fouche, slotted three conversions but, crucially, he succeeded with an easy penalty goal which proved to be the difference in the end.

The first half was a real arm wrestle and the Airlink Pumas showed their grit by scoring two tries and limiting the home side to just one converted try for a halftime lead of 14-7. It must be added that they were fortunate not to concede a second try in the opening stanza when a Cheetah try was ruled out because of a technical infringement.

Jimmy Stonehouse’s men made the perfect start when Williams opened the scoring. The home side levelled matters just before the halfway mark of the first half when Van der Westhuizen went over for the first of his two tries, scored from successful lineout maul, with Pienaar adding the extras with a superb angled conversion kick.

Eight minutes before the break, Airlink Pumas flyhalf Tinus de Beer collected a lineout overthrow to wrong foot several defenders on his way to scoring under the posts which Fouche easily converted to take the halftime score to 14-7 in their favour. 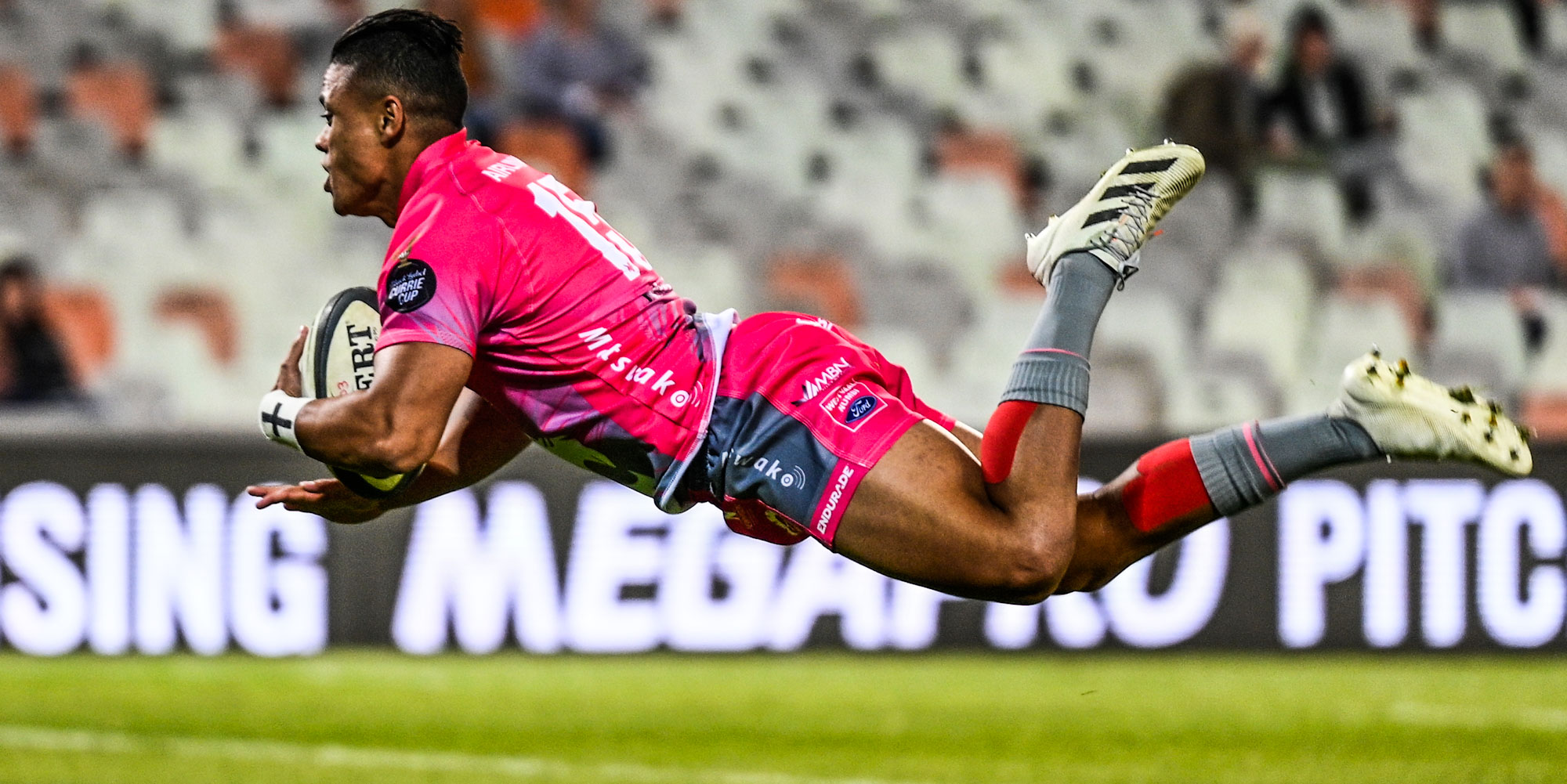 Devon Williams goes over for one of his tries for the Airlink Pumas.

Williams repeated his try-scoring act shortly after the restart for the pink and grey jerseys when he won the foot-race to dot down Fouche's clever grubber for their third try which opened up a 12-point gap. But the Cheetahs clawed their way back with a try by No 6 flank Gideon van der Merwe, who wormed his way over from a maul for a converted try to narrow the margin to 19-14.

The Lowvelders showed their grit once more by scoring a fourth converted try through hooker Eddie Swart (26-14).

However, that man Van der Westhuizen was at it again when he dived over the line for his second try of the evening and his team's third as they stayed in the fight with the score 26-21 in favour of the visitors.

Shortly after slotting the conversion, the dependable Fouche then landed that crucial penalty goal, his first of the match, as his team opened an eight-point gap (29-21).

Right wing Daniel Kasende’s try out wide, off a lovey skip pass from Pienaar, raised the home team’s hope as their captain brought his side to withing a point with his fourth conversion to take the score to 29-28 with just minutes remaining.

With almost the last kick of the match, the experienced Pienaar failed to raise the flags with his long-range penalty goal effort – which meant a crucial away win for the Airlink Pumas who kept alive their semi-final ambitions.

With the top two positions on the Carling Currie Cup log all but sewn up, the battle for the other two spots in the semi-finals will move up in intensity this weekend, with Windhoek Draught Griquas, the Cell C Sharks and the Airlink Pumas all in a race to reach the top-four, while the Down Touch Griffons are on the cusp of promotion as the action continues in the First Division.

Following confirmation of the inclusion of five teams from South Africa in the Heineken Champions Cup and EPCR Challenge Cup for the 2022/23 season and beyond, Europe’s three main professional leagues have expressed their approval of the historic expansion of EPCR’s tournaments.

Final round action to determine finalists

The league phase of the Women’s Premier Division concludes on Saturday, with three potential outcomes on who the finalists will be on 11 June when the season finale will be hosted by the team at the top of the log.

A Chris Smith drop goal in injury time sealed a dramatic Vodacom United Rugby Championship quarter-final victory by 30-27 (half-time 13-13) for the Vodacom Bulls, after 80 pulsating minutes of hard rugby against the Cell C Sharks in Pretoria on Saturday afternoon.

Lions claw their way to victory in the Shark Tank

The Sigma Lions managed to beat the Cell C Sharks 38-32 for a bonus-point win in their final Carling Currie Cup league fixture in Durban on Saturday after the home side led 22-14 at the break.

It's the final round of league action in the Women's Premier Division, with three matches scheduled for Saturday. Watch it live at the links below.