Each of the weekend’s exciting three Carling Currie Cup fixtures produced a memorable result as the Sigma Lions finally won their first game of the campaign in Johannesburg; Windhoek Draught Griquas stunned the high-flying Toyota Cheetahs in Kimberley to end their nine-game winning run; and the Vodacom Bulls staged a strong comeback to defeat the 14-man Airlink Pumas in Pretoria.

After coming agonisingly close on several occasions, the Sigma Lions finally produced a winning performance to defeat DHL WP 33-10 in the weekend’s third and final fixture played Saturday evening on the Highveld.

In the early Saturday afternoon clash in Kimberley, home side Windhoek Draught Griquas outplayed the Toyota Cheetahs to register a surprisingly comfortable 48-18 triumph to end the Free Staters’ unbeaten run.

And on Friday evening, defending champions Vodacom Bulls were forced onto the ropes for long periods by a determined Airlink Pumas, but the hosts managed to fight back and win their penultimate league clash by 31-26.

The weekend’s results left the Vodacom Bulls on 47 points, with a six-point lead at the top of the league standings, however, the holders have played 11 games compared to the 10 by the Toyota Cheetahs, who are second on 41 points.

Thanks to their sensational result in Kimberley, Windhoek Draught Griquas jumped into third place with 26 points, two more than the Cell C Sharks (24), who had a bye this weekend.

Two matches will be staged on Friday, 3 June during the penultimate round – DHL WP host Windhoek Draught Griquas in Stellenbosch (16h00), while the Toyota Cheetahs play the Airlink Pumas in Bloemfontein (18h00). The Cell C Sharks and Sigma Lions clash the next day in Durban (17h00) while the Vodacom Bulls have a bye.

The Sigma Lions defeated DHL Western Province 33-10 to record a bonus-point victory and register their first win of this year's campaign in Johannesburg on Saturday evening.

Tiaan Swanepoel was the Highvelders’ standout player as the pivot scored a try, slotted two conversions and three penalty goals for a personal contribution of 18 points to help steer his side to their first win of the campaign. He was deservedly awarded with the Champion of the Match accolade for his excellent contribution to the winning performance.

The Johannesburg outfit came mighty close to their first win on several previous occasions, but they were thwarted every time, sometimes very close to the final whistle. The outcome was also a hammer blow to DHL WP's outside change of sneaking into the playoffs.

The Peacock Blues outplayed the visitors from Bloemfontein in every aspect, punishing their neighbours’ mediocre defence and indiscipline to race into a 19-0 lead in the opening quarter.

The hosts wrapped up the four-try bonus point and held a commanding 24-8 at half-time and Pieter Bergh’s charges gave the much-vaunted visitors no way back after the break, scoring three more tries for a stunning win that sees them move up from fifth to third position, behind their old foes and the log-leading Vodacom Bulls.

The Vodacom Bulls won an incident-packed Carling Currie Cup match 31-26 against a fiercely competitive 14-man Airlink Pumas in their Round 12 clash played at Loftus Versfeld on Friday evening.

The match produced several yellow cards, a red card and a hat-trick of tries, while the Airlink Pumas will feel very hard done by as they came so close in the second half to score a potential match-winning try.

The pink and grey jerseys went into the halftime break with a well-deserved 26-12 lead having scored four tries and three conversions, while the hosts were awarded a penalty try to add to their unconverted try.

With the Lowvelders one man down because of a red card to flyhalf Tinus de Beer for a tip tackle, the home side managed to worm their way back into the game to eventually score three tries more tries to complete their successful comeback, scoring all the points in the second stanza as the visitors earned a second yellow card to add to their misfortunes. 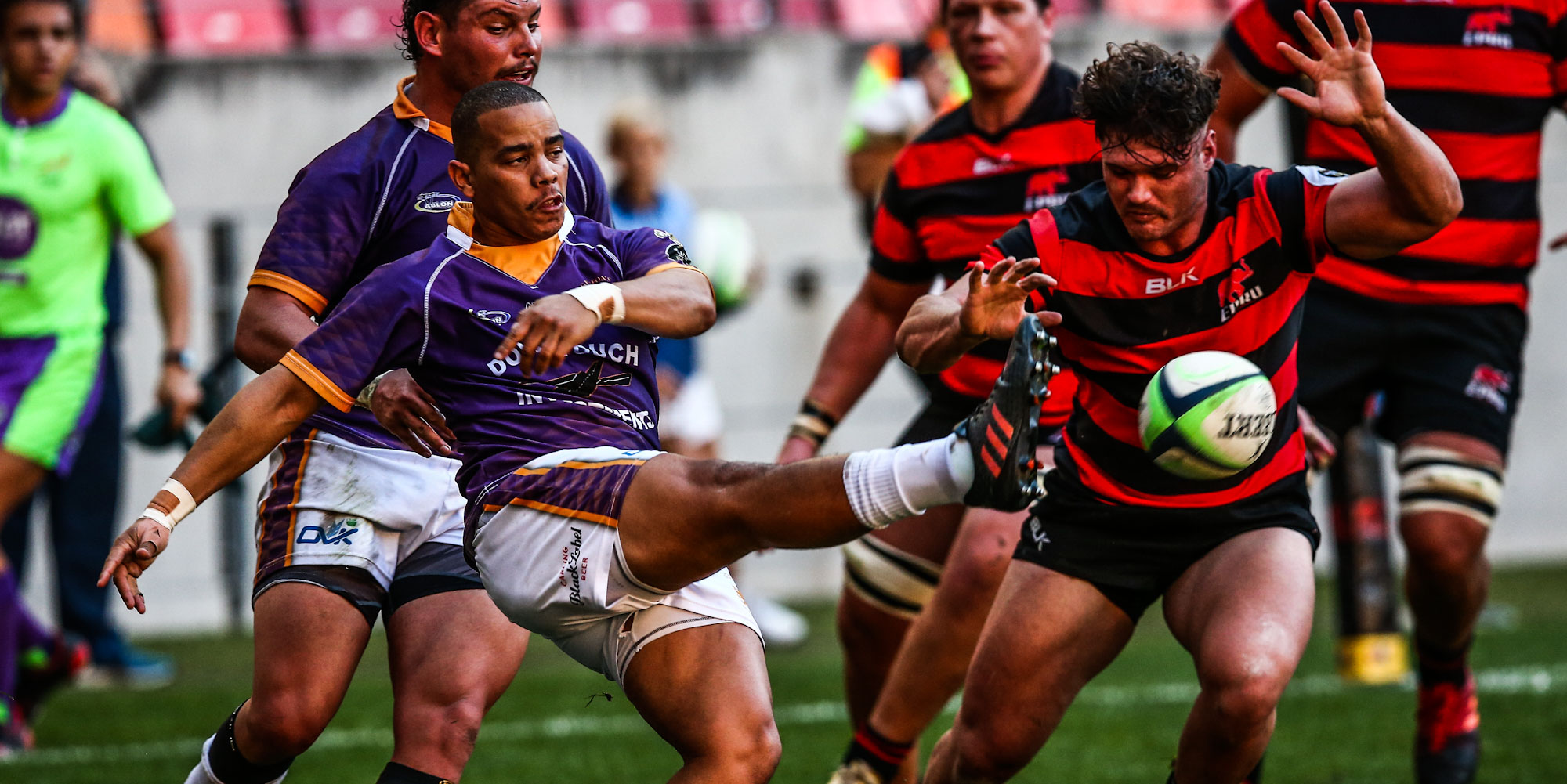 The Down Touch Griffons gave a big step towards promotion to the Carling Currie Cup Premier Division.

The Down Touch Griffons won the top-of-the-log clash with Eastern Province 23-13 at the Nelson Mandela Bay Stadium in Port Elizabeth on Saturday afternoon to move to within in a point of the log-leading Eastern Cape side.

The purple jerseys led 10-6 at half time and managed to keep their composure and the scoreboard busy at regular intervals to clinch a crucial result. An EP-win would almost certainly have clinched promotion, however, now they must hope the Valke do them a big favour over the Down Touch Griffons next weekend in Brakpan.

EP still lead the way with 25 points on the Promotion Barometer, but that is just a single point more than the Northern Free Staters, who sit second on 24 points with a game in hand.

Only matches involving SA sides are considered towards the race for Premier Division promotion (there are also three international sides competing in the Carling Currie Cup First Division).

Meanwhile in other action, the SWD Eagles beat the Kenyan Simbas 24-7 at City Park in Cape Town, while in another game at the same venue the Leopards outplayed the Zimbabwe Goshawks 35-0.

The match between the Boland Kavaliers and the Black Lion from Georiga was postponed and will now kick off at 15h00 on Sunday afternoon in Wellington.

In next weekend’ action, the SWD Eagles entertain the Black Lion on Friday evening in George, while the rest of the fixtures are scheduled for Saturday. The Valke host the Down Touch Griffons in Brakpan; the Border Bulldogs welcome the Boland Kavaliers to East London; the Leopards face the Simbas in Potchefstroom; and EP entertain the Zimbabwe Goshawks in Nelson Mandela Bay.