Earlier on Sunday, the Blitzboks were knocked out of the Cup competition when they went down 21-17 to Australia in the quarter-final at Twickenham, but they hit back to beat Spain 24-12 and set up a rematch with Ireland in the fifth-place final.

The Blitzboks started like a house on fire against Australia with tries by Siviwe Soyizwapi and Muller du Plessis inside the first two minutes to hand them a 12-0 lead. Three minutes later, Ronald Brown added a third five-pointer and at 17-0, the Blitzboks were cruising.

Australia grabbed one back just before the break, by Ben Dowling, to see the teams swap sides with SA leading by 17-7.

A minute into the second half, it was 17-14 as Henry Paterson scored Australia's second try, and after a mistake inside their own half by the Blitzboks, the men in gold took a 21-17 lead courtesy of a third try, also by Paterson.

Du Plessis left the field on the medical cart with less than 20 seconds to go and the Blitzboks fought hard to get themselves into striking distance in injury time after Australia conceded two penalties, but they failed to grab the match-winner.

Branco du Preez got the first points of the fifth-place semi-final when he scored his 100th World Series try in the third minute against the Spanish, who lost to Samoa earlier on Sunday in their Cup quarter-final. 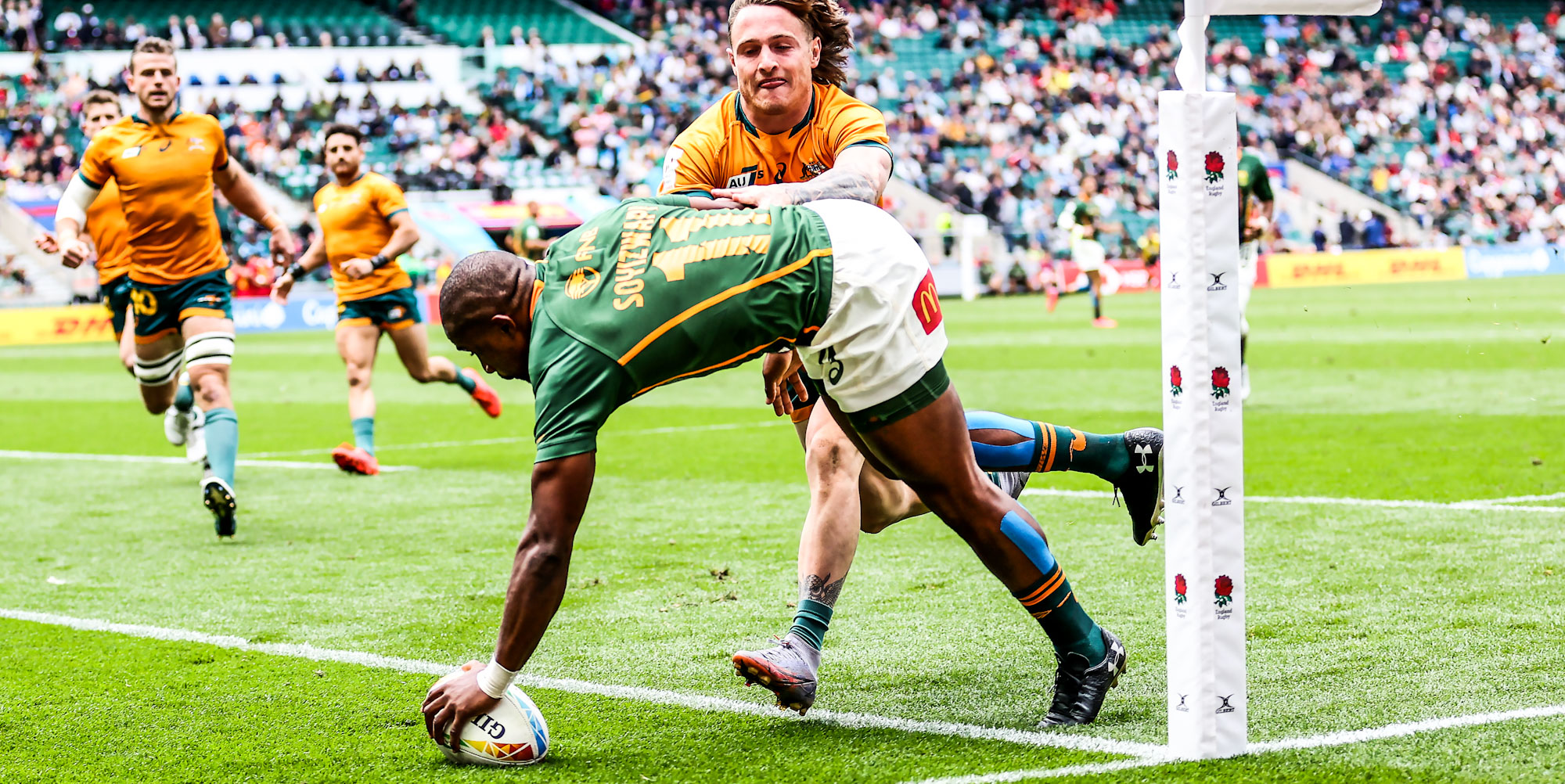 Siviwe Soyizwapi goes over early in the Cup quarter-final against Australia.

The men in red hit back with two tries - by Jerry Surumi Davoibaravi and Tobias Sainz-Trapaga - to take a 12-7 lead before Mfundo Ndhlovo scored a freakish try on the stroke of half-time.

The Blitzboks started the second half on the right note when Angelo Davids rand onto a deft chip into space and the conversion made it 19-12 with five minutes left on the clock.

With half a minute to go, Soyizwapi put the result beyond all doubt with his second try of the day, setting up another encounter with the Irish, whom the Blitzboks beat by 19-12 on Saturday.

The first half against Ireland was a very tight affair, with neither team giving an inch as the scores were still locked at 0-0 after the opening seven minutes.

Impi Visser finally broke the deadlock two and a half minutes after the start of the second half as the Blitzboks managed to put some phases together.

Ireland hit back just over a minute later through Harry McNulty, but as Brown converted earlier and the Irish failed to do so, the Blitzboks led by 7-5 with 90 seconds left on the clock.

Ndhlovu then sealed the win with a 55m straight run to score under the uprights and ensure South Africa finish fifth.

Wearing the mantle of defending champions and nine-time winners of the Emirates Dubai Sevens is one thing, but arriving ...