DHL Western Province, the Border Ladies and the Blue Bulls Women, took command of the Women’s Premier Division as the competition passed the halfway stage, with all three teams scoring important victories to stay in the top three position of the tournament log.

On Saturday, the Blue Bulls Women won 21-13 against Cell C Sharks in Pretoria to remain unbeaten after three matches, as did DHL WP, who outplayed the Mastercard Golden Lions Women 55-10 in Johannesburg. On Sunday, the Border Ladies beat the Boland Dames 32-15 in Mdantsane.

DHL Western Province showed why they top the standings from the first whistle of their match against the Mastercard Golden Lions Women, played at Wits University in Johannesburg. After some early courtesy blows, the visitors went to work when Asiphe Mayaba scored in the left corner and soon thereafter, fellow wing, Veroeshka Grain, dotted down on the right-hand side.

From then on, the Capetonians found the road of least resistance straight down the middle, which suited their powerful pack to a tee, with storming runs by Babalwa Latsha, Nopinky Mazwi and Sinazo Mcatshulwa, who dominated the gain line all afternoon, laying the foundation for a commanding 36-3 lead at halftime.

It also sent a timely reminder to their opposition that whoever plan to subdue DHL WP in the coming weeks, will have to overpower their forwards, which is not going to be easy.

Credit to the Lions though. Despite being outgunned, they kept plugging away and scored a try in the second half when Ruth Nkwana crashed over after 22 minutes, but the visitors soon extended that 41-10 advantage with another brace of tries which sealed their 55-10 win.

In Pretoria, the Blue Bulls Women had to come from behind to claim their second home win and third consecutive victory in the competition, when they beat the Cell C Sharks Women by 21-13.

The match against their Durban foes was – like their opening clash against Border Ladies – a curtain raiser to the Vodacom Bulls men’s team and once again, the team in blue did not disappoint the Loftus Versfeld crowd.

The hosts took an early lead when Libbie Janse van Rensburg kicked the first of her three penalty goals, but they were rocked on their heels following a well-worked try by Bongekile Langazane. The Blue Bulls enjoyed territorial and ball possession, but the Durbanites’ pack worked their way towards the tryline and the Sharks wing scored the first try of the match. 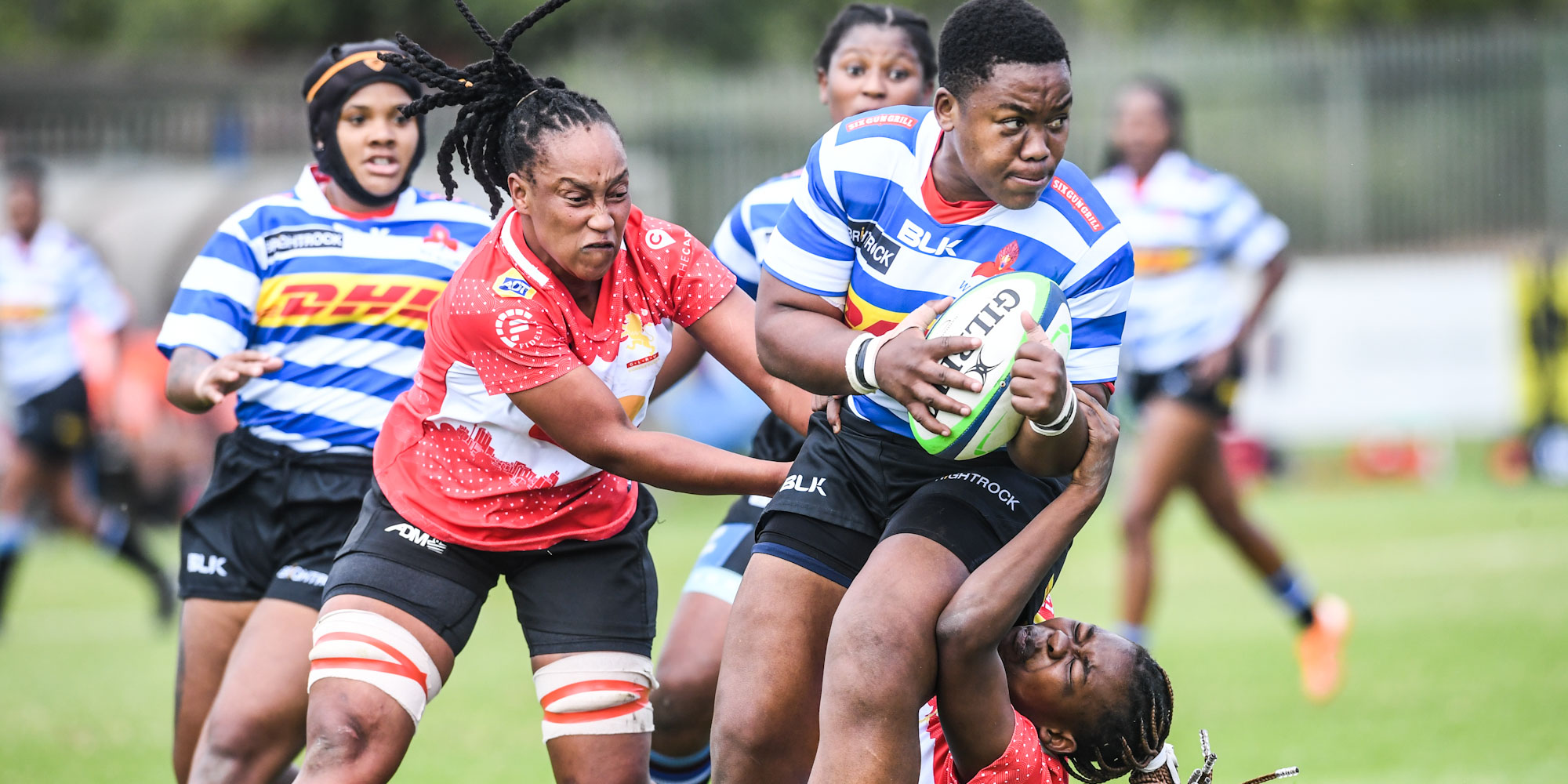 Babalwa Latsha carried strongly for DHL WP in their match against the Mastercard Golden Lions Women.

They scored another within 20 minutes when Megan Comley finished a delightful passage of play. The KwaZulu-Natalians drove well from an attacking lineout and then moved moved to the backs. They attacked well to the left and after the pack took it up again down the middle, Comley was worked over in the right-hand corner to hand her side a 10-3 lead.

The Blue Bulls kept plugging away though and scored a wonderful try just before the break when Chantel Dikgale (wing) ran onto a neat inside pass. She broke the first line of defence and accelerated to score under the posts. Janse van Rensburg converted to draw the scores level at the break.

The Blue Bulls pivot edged her side ahead early in the second half with a second penalty goal, but good pressure by the visitors allowed her direct opponent, Mary Zulu, to even matters out with a penalty goal.

Janse van Rensburg grabbed the lead back for her side with her third successful penalty attempt and with six minutes to go, Dikgale scored a second try that proved decisive. The visitors never gave up though and came back with a last gasp attack, but the home side’s defence stood firm when it mattered.

The final match of the weekend was on Sunday afternoon in Mdantsane, where the Border Ladies continued their winning streak in the competition, this time outplaying Boland Dames 32-15. They held a 14-5 half-time lead at Sisa Dukashe Stadium and outscored the visitors by five tries to three in an entertaining clash.

It was a tight first half with Border getting the first points of the match near the 30-minute mark. From a quick-tap penalty, Aphiwe Ngwevu crashed over from short range against her former team to put her team 5-0 up.

It took them less than two minutes to score again when flanker Sivuyiseko Makhomazi barged over for a 14-0 lead, but Boland struck back when a powerful shove from the pack saw flanker Maxene Valentine pounce.

Border extended the lead to 19-5 in the second half when Unathi Mali crashed over following a good attack down the blindside, with the fullback cutting in from an angle.

Valentine scored a second on the back of a powerful lineout drive to cut the lead back to nine points again, but Border got another, scored by centre Yandisa Nobanda, before scrumhalf Theresa Ruiters closed the gap again for the visitors.

Not to be outdone by her counterpart, Unam Tose scored the final try which proved to be the final nail in Boland's coffin.

Twenty-six of the country’s best Under-20 players assembled in Johannesburg on Monday to prepare for their Junior Spring...

Rosko Specman returned with a vengeance as the Toyota Cheetahs ran the Cell C Sharks ragged to register a 44-15 bonus-point win in Bloemfontein on Saturday afternoon and continue their flawless run in this year’s Carling Currie Cup.

The Vodacom Bulls pulled off a nail-biting 43-37 victory over the Sigma Lions at Loftus on Saturday evening thanks to a solid first-half performance in this Carling Currie Cup fixture.

The Airlink Pumas outside chance of gaining a playoff spot received a setback on Friday evening when they lost their home Carling Currie Cup match 23-17 against the DHL Western Province in Nelspruit.

Toulouse don’t get beaten every day and they don’t get outplayed often, so it shouldn’t be surprising that the leading team on the Vodacom United Rugby Championship log, Leinster, received rave reviews for their exploits at the weekend.

World Rugby Council has voted unanimously to adopt five welfare driven global trials into full law from 1 July. The new laws mean that the forthcoming women’s and men’s Rugby World Cups will feature the current package of global welfare-driven law trials, including 50:22 and the goal-line dropout.

A 24-man DHL Stormers squad will travel to Wales on Monday evening for their final Vodacom United Rugby Championship league match when they take on the Scarlets at Parc y Scarlets in Llanelli on Saturday, 21 May.

Blitzboks call up Blood to replace Davids in France

The Springbok Sevens squad to play in the HSBC France Sevens this weekend had a late change when Selvyn Davids was declared medically unfit to travel, with Dalvon Blood named as his replacement.

The experienced Zintle Mpupha has been called up to the Springbok Women's Sevens squad in Toulouse on Monday for the HSBC France Sevens from 20-22 May.

Toulouse don’t get beaten every day and they don’t get outplayed often, so it shouldn’t be surprising that the leading team on the Vodacom United Rugby Championship log, Leinster, received rave reviews for their exploits at the weekend.