Exciting young scrumhalf Bernard van der Linde scored a try at the death as UP-Tuks edged Maties 29-23 in a dramatic final in Stellenbosch to claim the FNB Varsit Cup title with the victory equaling the most number of trophies won by a side, as the students from Stellenbosch and Pretoria have now each won the competition five times.

Maties went into this decider determined to channel the energy and aura of the Danie Craven Stadium, while, UP-Tuks spoke about silencing the home crowd in their quest to win a second consecutive title.

While the home fans made their presence felt in the first half, they were more subdued in the second. The decision to award Van der Linde a late try – despite video replays which suggested that a pass in the build-up may have travelled forward – was not well received by the Maties faithful.

By contrast, the UP-Tuks fans at the ground rejoiced. The try, and ultimately the result, ensured that Nico Luus’ side claimed its second consecutive title.

The Maties pack dominated the scrums and breakdowns in the first half, while the backs – flyhalf Nevaldo Fleurs in particular – converted pressure into territory and points.

UP-Tuks struggled to retain possession and were uncharacteristically porous on defence. While they came into this clash with plenty of intent and aggression, they lacked the necessary accuracy and discipline.

The visitors conceded 11 penalties in the first half alone. Maties made the defending champs pay for their mistakes. An unmarked Mike Mavovana claimed a superb cross-kick by Taigh Schoor to score the opening try. Fleurs kicked five penalties to ensure that the hosts went to the break with a 20-10 lead.

The momentum shifted in the second stanza, however, after UP-Tuks delivered a more precise showing at the collisions and set pieces. Kabelo Mokoena scored in the 53rd minute to bring his side back into the contest. UP-Tuks crossed the line again – but were denied after Maties used their white card challenge to identify a knock-on in the build-up. 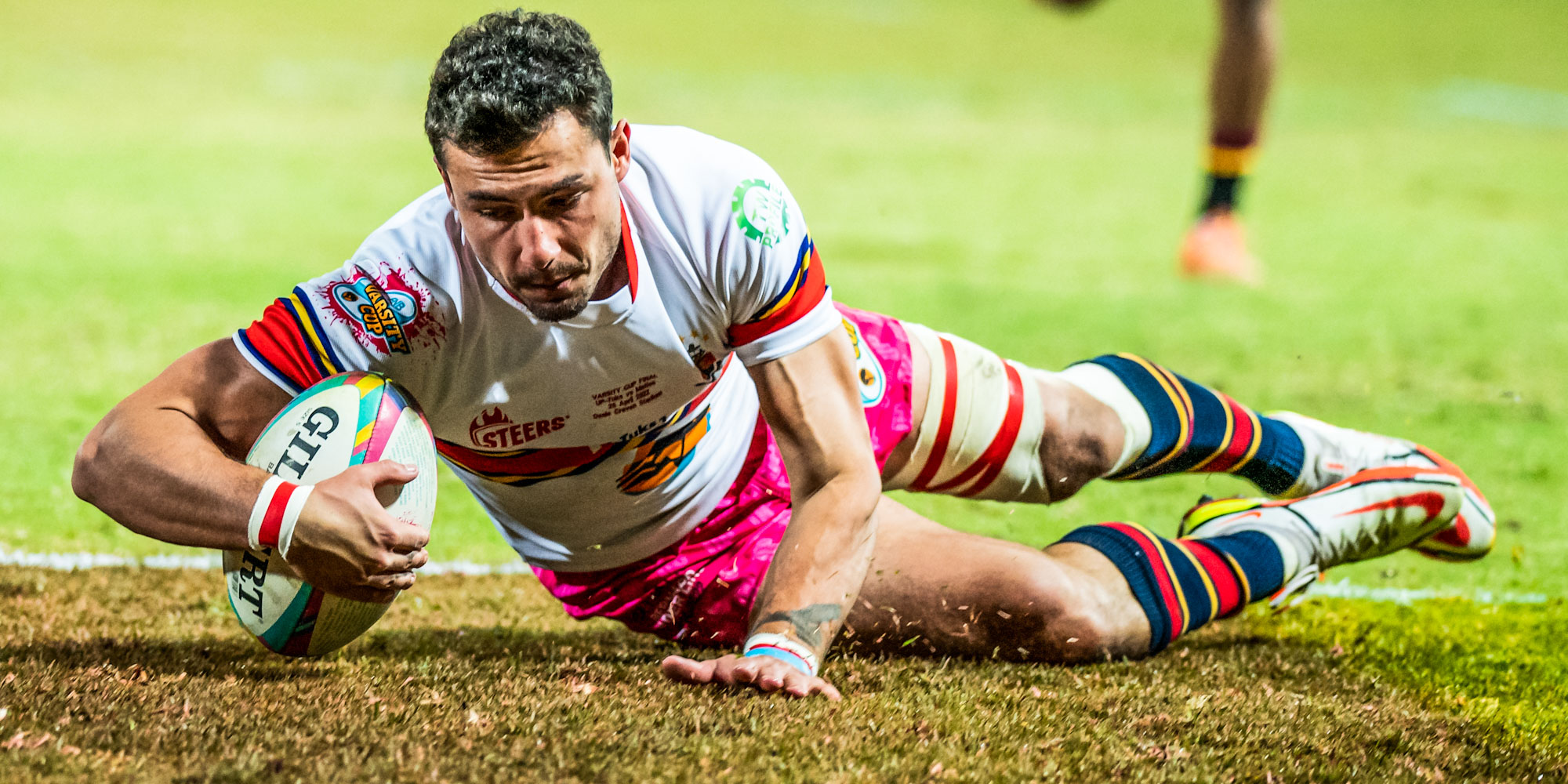 UP-Tuks continue to apply the pressure. When Mokoena scored his second try in the 70th minute, the visitors were within sight of a dramatic and unlikely victory. Maties failed to finish a scoring chance at the other end, and then allowed the visitors one final opportunity.

Coetzee launched an audacious attack from within his own half, and beat several defenders. The fullback managed to offload to Van der Linde, who showed exceptional pace to finish. Maties used their white card challenge to query the pass by Coetzee to Van der Linde.

TMO Egon Seconds ruled that the pass was not obviously forward, and so the decision to award the try was upheld. With this result, UP-Tuks have equalled Maties’ record of five FNB Varsity Cup titles.

Earlier, UP-Tuks beat the NWU Eagles 22-14 in the FNB Young Guns final.  It was Tuks’ sixth title in eight editions of the U20 tournament and avenged their only loss of the group stage to the Eagles in Potchefstroom.

However, Ntleki knocked on with an open tryline a few minutes later, which proved costly as Wentzel slotted three penalties to secure the title for Tuks. Tuks tighthead prop Mawande Mdanda was rewarded for a dominant scrum showing with the FNB Player That Rocks award.

The Vodacom Bulls recorded their third win in as many weeks of the new Vodacom United Rugby Championship season when the...

Plaatjies to debut for South Africa in Tunisia

Asisipho Plaatjies will make her international debut for the Springbok Women’s Sevens team at the Rugby Africa Women's Sevens tournament in Tunisia this weekend after she was named in a fairly experienced squad assembled by coach Paul Delport.

The DHL Stormers marched into an impressive second place and the Cell C Sharks into fourth on the Vodacom United Rugby Championship log, while the Vodacom Bulls remained in eighth position in a rewarding round for three of South Africa’s four sides.

Dr Dawie de Villiers, a former Springbok captain who passed away at the age of 81 on Saturday night after a long battle with cancer, was honoured for his role in South African rugby, but also in the wider society as a politician later in his life, by Mr Mark Alexander, president of the South African Rugby Union.

The 2022 Women’s Premier Division kicked off with a big upset on Saturday, when the Blue Bulls Women shocked defending champions Border Ladies 12-0 in Pretoria in the opening round to lay down an early marker in the new season.

The Cell C Sharks had to dig deep to beat an inexperienced Leinster side by 28-23 (half-time 14-17) in a very tense Vodacom United Rugby Championship clash played in difficult conditions in Durban on Saturday evening.

Stormers change three for top of the table clash

The DHL Stormers starting team for Saturday's top of the table clash in the Vodacom United Rugby Championship against Leinster in Cape Town show three changes from the side that beat Glasgow Warriors last week.

The South African franchises will be desperate for one last big shove as they wrap up their home run in the league phase of the Vodacom United Rugby Championship this weekend, with three of the four sides looking to give themselves the best possible chance to secure favourable quarter-final spots.

SA Rugby announced on Thursday that it had renewed its long-standing partnership with Southern Sun, southern Africa’s leading hospitality group, for a further five years, extending their association with SA Rugby and the Springboks to three decades.

There will be emotions aplenty when the Springbok Women's Sevens enter the Mustapha Ben Jannet Stadium in Monastir on Friday to take on Senegal in their opening match of the Rugby Africa Women's Sevens.

The Vodacom Bulls' starting team for their crucial Vodacom United Rugby Championship clash against Glasgow Warriors in Pretoria on Friday evening show a number of changes from the side that beat Benetton last week.

Plaatjies to debut for South Africa in Tunisia

Asisipho Plaatjies will make her international debut for the Springbok Women’s Sevens team at the Rugby Africa Women's Sevens tournament in Tunisia this weekend after she was named in a fairly experienced squad assembled by coach Paul Delport.

Stormers change three for top of the table clash

The DHL Stormers starting team for Saturday's top of the table clash in the Vodacom United Rugby Championship against Leinster in Cape Town show three changes from the side that beat Glasgow Warriors last week.