Selvyn Davids scored a try after the buzzer to ensure the Springbok Sevens team won their fifth consecutive HSBC World Rugby Sevens Series tournament – and their third of the 2022 season – when they beat Argentina by 24-17 in Malaga on Sunday.

The victory also extended the Blitzboks’ lead on the overall log for the season, and they will enter next weekend's HSBC Spain Sevens event in Seville as first seeds and on a 29-match winning streak.

Springbok Sevens coach Neil Powell said afterwards he expected nothing less than a tight, tense affair as the Argentineans have proved to be relentless opponents over the years.

“It is never easy playing Argentina and to be honest, it is never a free-flowing game where the ball goes from side to side,” said Powell.

“They always make it a scrap; they are a hard-working team that never stop in trying to disrupt you. They always make it as difficult as possible for their opponents and it was the same tonight. We were probably blessed finishing the game as winners.

“We are happy with the result knowing that Argentina made us work for every meter and every point, so it was a satisfying win we had to work for.”

The moment that mattered

Powell said the five changes from the side that won two back-to-back tournaments in Dubai at the end of 2021 was always going to be challenging as the new players were coming back from injury and had a lack of game time, but he was satisfied with their performances.

“The five new players were expected to make some mistakes, being rusty, but that is out of the way now. There are lots of positives to take out of this weekend and we will be better next week in Seville, I believe,” said Powell, adding that the number of game breakers in his squad makes it easier to fight back when down on the scoreboard.

“Yes, we have some players with the X-factor, which always gives you a chance in tight matches. I also know they work hard for the teammate next to them. There are a lot of character and mental strength in the squad, so you always expect them to come back when behind on the score board.”

To get their hands on the inaugural Malaga trophy was hard work though, as the final was a tense affair, with South Africa required to come from behind twice, scoring the match winner deep in overtime in the second half.

Argentina started very well and a slip up in defence saw the South African line breached for only the second time in five matches in Spain. Rodrigo Isgro found the open space to his liking and dotted down after a minute, but the conversion went wide.

It took the Blitzboks all of six more minutes to draw level and then take the lead at the break. Selvyn Davids scored the opener, with the playmaker exploiting space after a quick tap, and Branco du Preez’s conversion put South Africa in front at the break by 7-5. 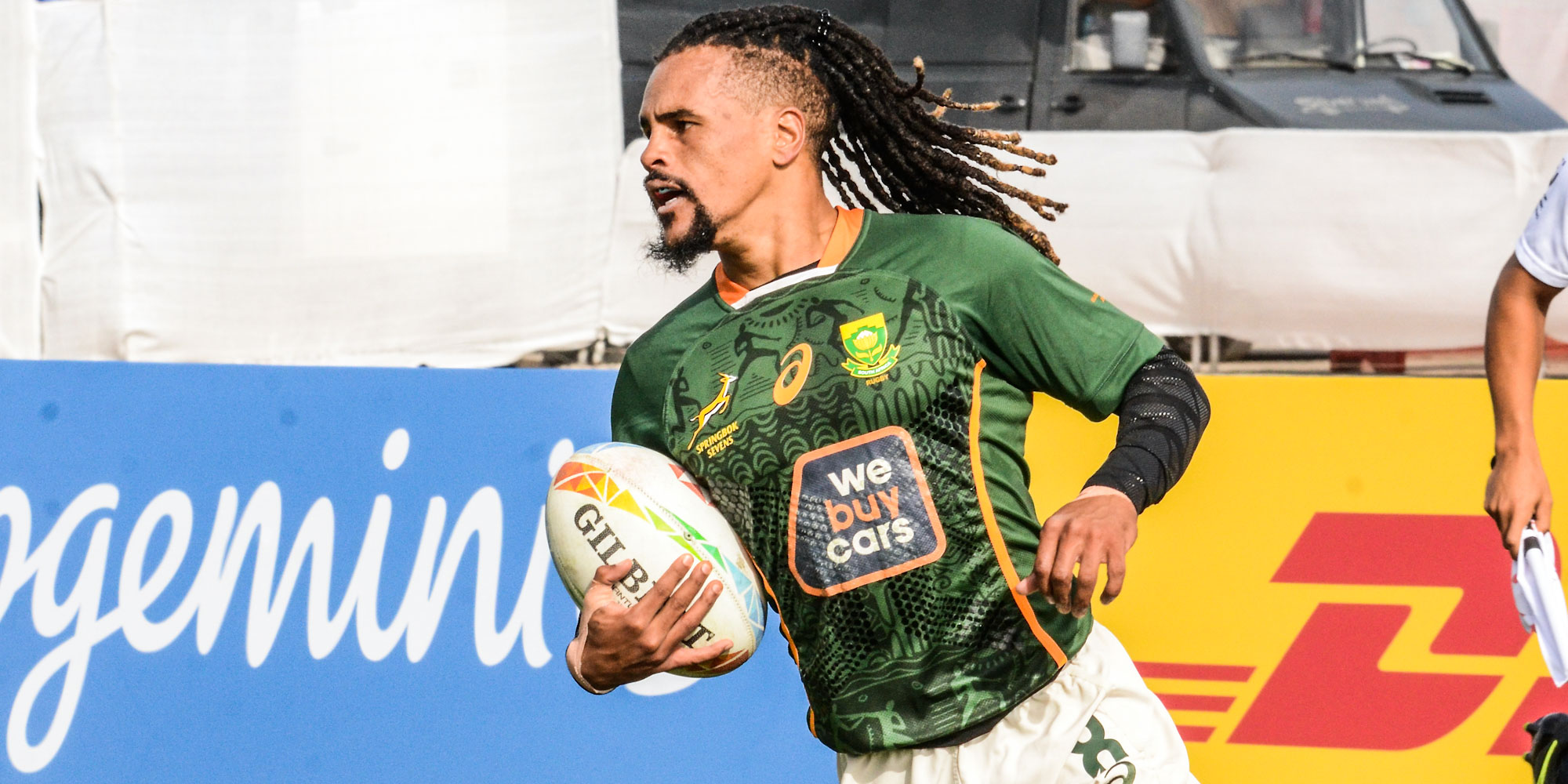 Selvyn Davids was named Player of the Final after the Blitzboks clinched the Malaga Sevens crown.

The second half started well for the Blitzboks. Zain Davids created a brilliant turnover and JC Pretorius was over the line in a flash. The conversion went wide, but the lead was 12-5, meaning that Argentina needed two scores to regain the lead.

It took them only a minute to do that.

Joaquin de la Vega scored and from the resulting restart, gathered the ball to score his second try, which suddenly handed the Pumas a 17-12 lead with three minutes to play.

The replacements again came through for the Blitzboks though and from sustained pressure, Justin Geduld dotted down in the corner to draw scores level again at 17-17 with 30 seconds left on the clock.

A final push by South Africa saw Selvyn Davids racing through to score the match and tournament winning try 65 seconds after the final buzzer. Justin Geduld kicked the conversion for good measure.

Earlier in the day, they outplayed Australia 19-0 to reach the final in Malaga, starting strongly and never taking their foot off the pedal.

The Springbok Sevens team will face Canada in the quarter-finals of the HSBC Spain Sevens in Malaga at 20h07 (SA time) on Saturday after an impressive 43-0 victory over England in their second and final pool match.

Springbok wing Makazole Mapimpi scored a hat-trick of tries which helped the Cell C Sharks to a 47-37 win (halftime 27-18) over the Emirates Lions in an entertaining Vodacom United Rugby Championship clash in Johannesburg on Saturday.

A late try by DHL Stormers replacement scrumhalf Paul de Wet sealed a 30-26 win and their second Vodacom Rugby Championship victory in a gripping encounter against the Vodacom Bulls at Loftus Versfeld on Saturday.

South Africa secured an eighth consecutive semi-final berth in the HSBC World Rugby Sevens Series in Spain on Saturday, beating Canada 14-0 in their Cup quarter-final at Estadio Ciudad de Malaga and setting up a final four showdown against Australia at 14h09 (SA time) on Sunday.

The Springbok Sevens opened their HSBC Spain Sevens campaign in Malaga with a come-from-behind 27-7 win over Scotland, with the five try victory their 25th consecutive win in the HSBC World Rugby Sevens Series.

Former Springbok captain and No 8 Bob Skinstad believes this past weekend was just what the four South African teams in the Vodacom United Rugby Championship have been looking for.

There are few things more rewarding on the HSBC World Rugby Sevens Series than to finish a tournament on the top step of the podium, with a gold medal around your neck and fireworks going off in the background, and for Springbok Sevens flyhalf Dewald Human, it is when the saying “teamwork makes the dream work” really bears fruit.

The Springbok Sevens team will face Canada in the quarter-finals of the HSBC Spain Sevens in Malaga at 20h07 (SA time) on Saturday after an impressive 43-0 victory over England in their second and final pool match.