A stunning first half display and two tries of pure magic aided the Springboks to a well-deserved 29-10 win over Argentina in the second of their Castle Lager Rugby Championship matches at Nelson Mandela Bay Stadium on Saturday, and helped them maintaining their strong start in this year's tournament.

The Springbok pack dominated proceedings in the opening 40 minutes and forced their opponents into a number of punishable offences, especially when trying to stop the driving maul, and flyhalf Handre Pollard kicked five penalty goals to ease his team into a 15-3 lead at the break.

Two very well worked tries in the early stages of the second half by the Springboks opened the lead to 29-3, but unfortunately for the South Africans, they could not finish the deal and left a potential bonus point out there, especially in the last 10 minutes of the match, when they delivered a scrappy effort in search of the third try.

Argentina, to their credit, never backed off - despite two yellow cards - and played well after the final buzzer in search of a try, which they found 46 minutes into the second half.

For 65 minutes though, the Springboks were peerless and deserved applause for their approach to the game. They used their main weapon - the driving maul - to good effect but also showed good variety in attack with the ball going wide a number of times.

The Boks made their intentions clear very early in the match by twice declining kickable options and going for a lineout drive. Both were repelled by Argentina, but they did so illegally each time, with a warning and more penalties awarded by referee Karl Dickson. 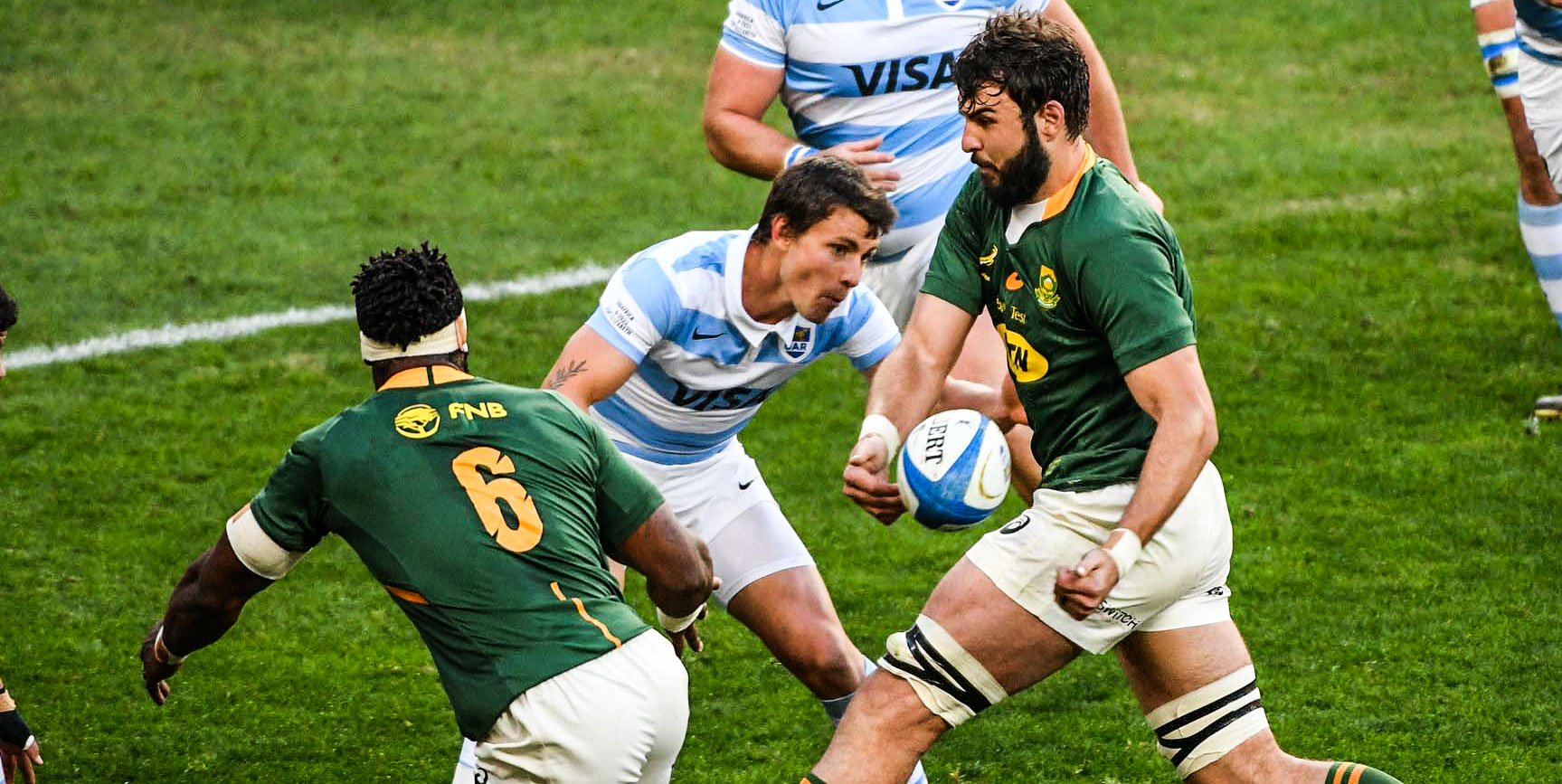 Lood de Jager delivered a man of the match performance in his 50th Test.

Pollard popped over the third of those in the Pumas' 22 and after 10 minutes the Boks were 3-0 up.

The Argentineans, who opened up the Test match with some strong play through their forwards, tried to get the momentum back immediately, but they were smashed back by determined Bok tackles, a trait that continued throughout the match.

The Boks lost Trevor Nyakane as early as the 13th minute and Steven Kitshoff packed down for the first scrum of the match. The Pumas went backwards in the second scrum already and Pollard slotted a consecutive penalty goal 16 minutes in to push the lead to six.

The Springboks were beating the Pumas to the punch at this stage, edging them in the loose and looking sharper in attack.

Pollard kicked a third penalty goal 21 minutes in after the Pumas could only collapse a powerful maul surging towards their line and the nine point lead was good reward for the Boks effort in the first quarter of the match.

A Bok mistake from the resulting restart - sealing off - had the Pumas on the board shortly after with flyhalf Domingo Miotti kicking his first points of the match.

The Springboks were offering a bag of tricks to the Pumas, with good variety on attack, but with a functioning lineout and maul, it became jam money for Pollard, who kicked a fourth penalty goal from another collapsed maul. Dickson spoke to Pumas captain Julian Montoya twice in the half about their discipline. 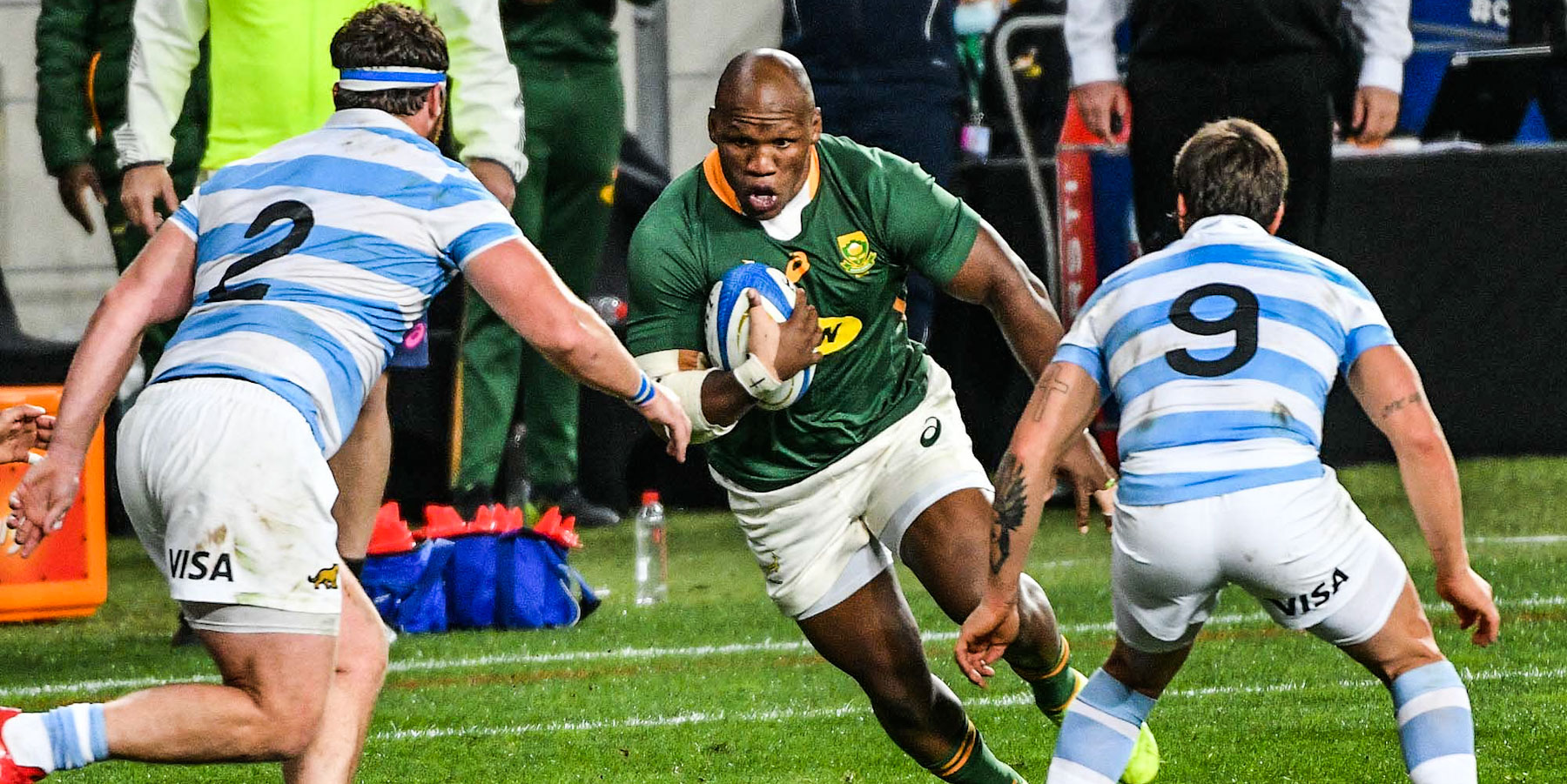 Bongi Mbonambi on the charge.

The very next maul saw the yellow card being pulled as No 8 Rodrigo Bruni was found pulling down the South African effort and Pollard again made no mistake kicking his side into a 15-3 lead as the South America side offered little legal resistance.

Miotti got a second chance from way out on the halftime hooter but he pushed it to the left.

The first action of the second half saw good Pumas pressure when a kick by Cobus Reinach was charged down and Pollard pinged for a tackle in the air. Miotti missed the penalty though, with the return of Bruni to the field some respite.

That was short-lived however.

A Bok try - a thing of beauty - was on its way. The attack was founded in a good lineout win and a new move, which saw Cheslin Kolbe starting as front jumper before taking a neat inside pass from Siya Kolisi. That set up a flowing interpassing move in motion with Willie le Roux involved twice, the second time finding Makazole Mapimpi with a pass that freed up the left wing to continue with his amazing try-scoring feat in Tests.

Pollard slotted from a tight angle and suddenly - 48 minutes in - the Boks were racing away to a 22-3 lead.

The new energy brought immediate results and from the next lineout close to the Pumas line - following a pin-point kick by Pollard - Malcolm Marx dropped over the line. Pollard converted and the lead was 29-3 with 53 minutes played.

Damian de Allende was well marked in the midfield.

That was the hooker's last contribution in an meaningful effort and Bongi Mbonambi was released to put more misery in the outplayed Pumas pack.

A sortie into the Boks' 22 - after an hour of play - looked promising for the Pumas, but yet again they fluffed their lines as they lost the ball close to the tryline. They then tried to outflank the Boks by using their backline, but again the Boks could snuff out the attack with a good read by Lukanyo Am.

The Bok changes were complete in the 65th minute with the last of the two Bok subs being called on as Damian Willemse and Jaden Hendrikse replaced Le Roux and Reinach respectively.

Hendrikse sadly departed soon after though due to a leg injury, resulting in the Boks finishing the last eight minutes (and the six minutes of added time) of the test with 14 players. Kolbe moved to scrumhalf.

The Boks missed some opportunities in the last quarter though. Two missed lineout throws near the Pumas line and a Pollard kick that did not find touch will be looked at by the coaching staff in their search for the missing bonus point.

Instead it was the Pumas who finished strongest - and credit to that effort of theirs in scoring a try six minutes after the final hooter. They probed and probed and finally managed to get a maul going that resulted in Pablo Matera breaking the try-scoring voodoo against the Boks in this series, their first try after a 166 minutes of rugby.

Physicality and discipline key for Boks

Physical dominance and good discipline will be two of the key factors for the Springboks when they line up against Argentina in their second Castle Lager Rugby Championship Test in Nelson Mandela Bay on Saturday.

Handré Pollard says the Springboks are determined to build on the standard set against Argentina in their Castle Lager Rugby Championship opener last weekend, as they finetune their preparations for the follow-up match on Saturday.

Argentina head coach Mario Ledesma has made a bunch of changes for Saturday’s second Test against the Springboks in the Castle Lager Rugby Championship at the Nelson Mandela Bay Stadium, where kick off is scheduled for 17h05.

Tafel Lager Griquas gave their Carling Currie Cup playoff hopes a massive boost when they powered to a 46-25 bonus-point win over DHL Western Province on a sunny Sunday afternoon in Kimberley.