A stellar first half performance on attack was enough to hand the SA 'A' side a 17-3 lead at the break, but heroic defence in the second 40 minutes held sway in the final result of the match.

The fact that the visitors started the second half playing against 13 men, with Faf de Klerk and Marco van Staden sin-binned, gave the tourists momentum and a converted try and penalty goal in return, but they were slowly put back on their heels by a green tackling machine.

The early action showed why many regarded this as the fourth test match on tour. The physicality of the hits and breakdowns from both sides were immense with every inch earned the hard way. 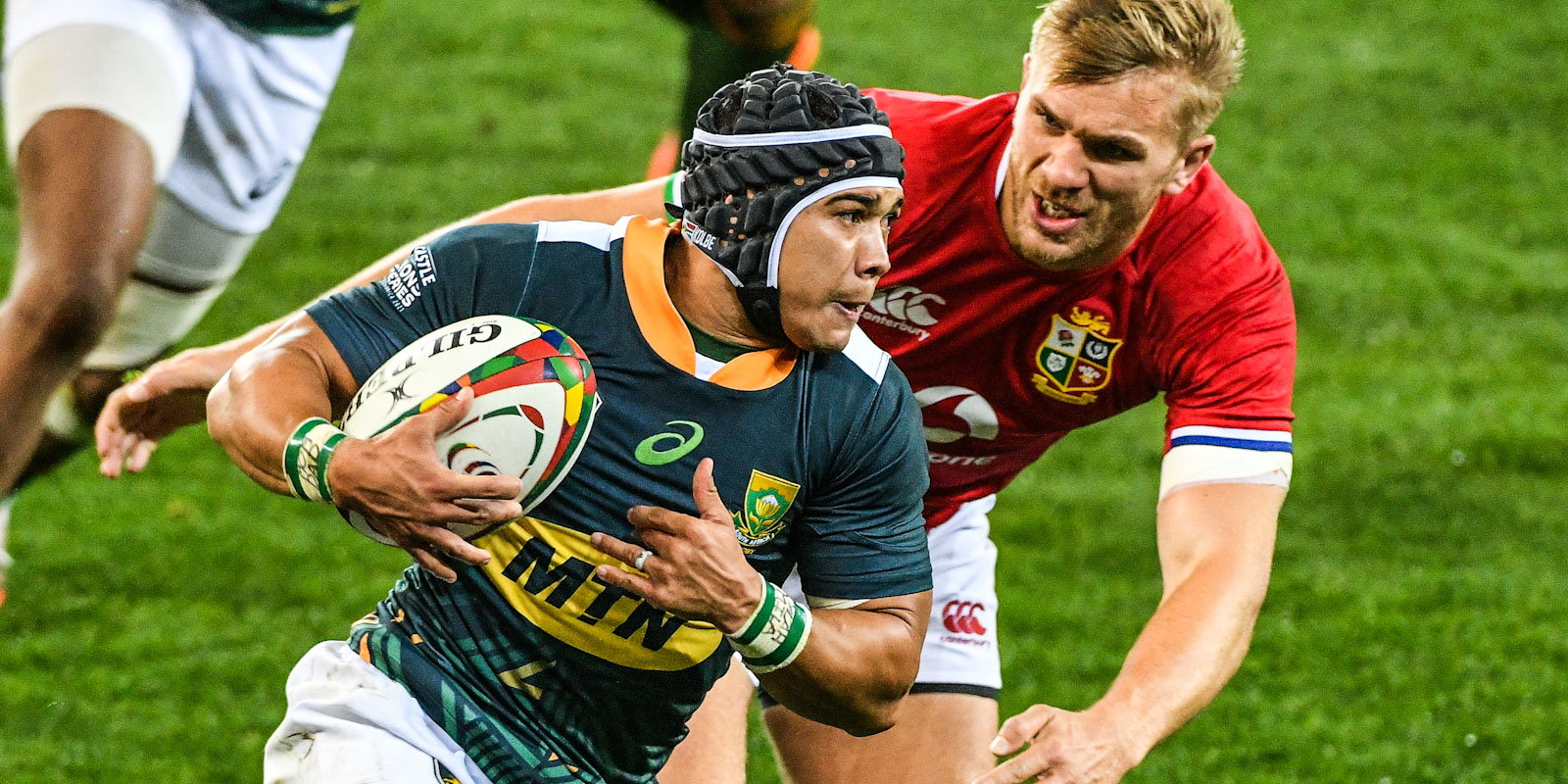 Cheslin Kolbe was brilliant in his first match in green and gold since the RWC Final in 2019.

The first try-scoring opportunity came from a turn-over. Joseph Dweba (hooker) made early inroads with a good steal and on the counterattack Sbu Nkosi was ruled to have put a foot in touch when he went over in the corner after five minutes.

The Lions were offside in the lead-up though and Morné Steyn kicked the first points of the match for some reward to his side.

The first couple of scrums saw the visitors gain the upper hand and a penalty, but the Lions option to kick to the line for an attacking maul that ended up as a turnover to South Africa 'A'.

Tries were clearly going to be hard to come by with such ferocious defence and it was a charge down against the run of play that gained the home side an early advantage they never surrendered. 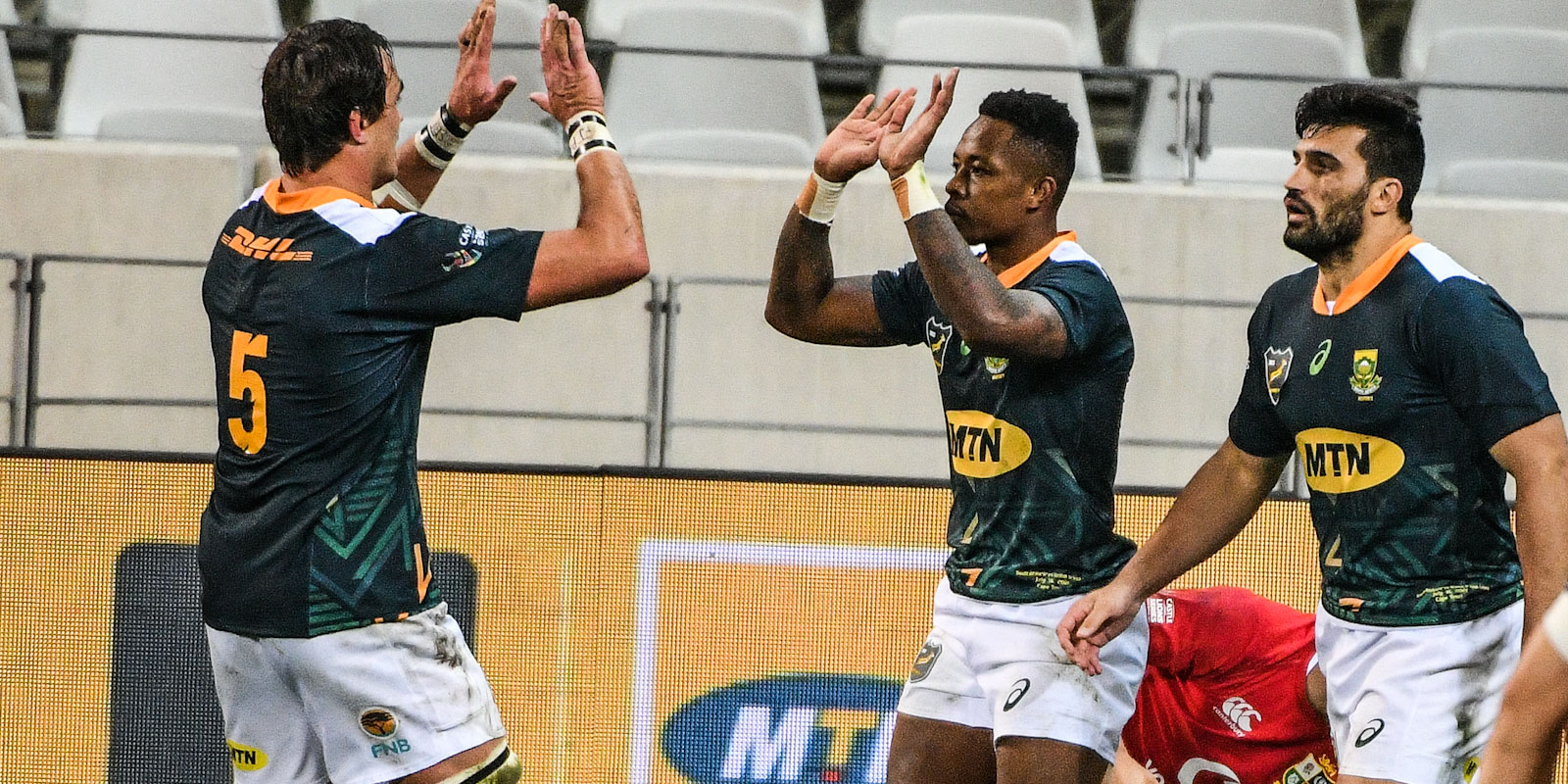 Eben Etzebeth charged down an attempted chip by Farrell with the Lions attacking on the SA 22, Damian de Allende regathered and sent Nkosi on his merry way.

This time the wing made no mistake with the corner flag and dotted down 75 meters from where the charge down occurred. Steyn kicked the conversion for a 10-0 lead 13 minutes in.

The SA 'A' side attacked strongly, but were held out twice before the Lions worked their way back up the field and into the opposing 22. They were rewarded with a Farrell penalty goal for their first points after 27 minutes, but also the knowledge that they could hold out the Bok drives.

They still needed to find a way how to keep Cheslin Kolbe in check though.

The wing gathered a misdirected kick near the halfway line and a step and a swerve later had Louis Rees-Zammit and Chris Harris grasping thin air. Kolbe released Lukhanyo Am for a beautiful try by the team captain. Steyn slotted the conversion and pushed the SA 'A' lead to 17-3 after 32 minutes.

Jasper Wiese on the charge for SA 'A'.

Credit to the Lions though, who again surged up field with a number of drives and kept plugging away at the SA line. They opted for tapped penalties twice with South Africa under pressure and conceding penalties and from yet another sortie, De Klerk was deemed to have tackled without arms.

He was sin-binned and a minute later, was followed by Van Staden after yet another maul collapse by the green team and the flanker ruled as the culprit. South Africa held on, but the Lions went into the sheds knowing that they will be facing 13 men for the opening part of the second half.

The red jerseys started strongly and found the outnumbered SA side's defence stretching to breaking point. They worked their way upfield and it was only a matter of time before the Lions would cross the line. It was Wyn Jones (prop) who scored his first of the match and his team's first of the match, 42 minutes in.

That cut the lead to a converted try with another six minutes against 13 defenders.

Farrell kicked a long-range effort to cut the lead to four, but Van Staden's return at least meant that it will be fifteen aside for the last 30 minutes of the match. Lukhanyo Am on the way to the tryline.

Rees-Zammit went very close, but was deemed to have made a second movement as he stretched for the line and the SA side could escape from their red zone.

The SA 'A'-side had a good maul going and forced a penalty, went for another lineout, which earned them another penalty. Steyn stepped up but his 45m effort just missed.

The pendulum seemed to have slowly swung back towards South Africa, who tackled everything that moved in red with great passion and determination.

They decided to go for the lineout drive twice in short succession, with both attempts being repelled by the home unions side. An illegal tackle on Jasper Wiese gave his team another great lineout drive opportunity with eight minutes left, but again the only advantage the SA side got was the time being eaten by the stadium clock.

The Lions had a last chance in the final minute of play, but a handling error handed the ball back to South Africa, who cleared the ball from the resulting scrum to claim a hard-fought win.

The four South African Vodacom United Rugby Championship franchises will battle it out for the second week in a row in t...

Kolisi: “Award could have gone to anyone”...

Springbok captain Siya Kolisi said he was “honoured and grateful” to win the SA Rugby Player of the Year award for the 2...

Seasoned Springbok Willem Alberts will start at lock for the Emirates Lions in their Vodacom United Rugby Championship e...

DHL Stormers coach John Dobson had to make two injury-enforced changes to their pack of forwards for the Vodacom United ...

Erasmus hopeful for another SA ‘A’ fixture

In an effort to boost the players’ match fitness and give them the best possible chance to push for places in the Springbok Test team, Rassie Erasmus was hoping that the South Africa ‘A’ side could play a second match on Saturday before the Test series against the British & Irish Lions kicks off next weekend.

Kolbe, De Klerk thrilled to be back in Green & Gold

Springbok backs Cheslin Kolbe and Faf de Klerk cannot wait to pull the green and gold jersey over their heads when the SA ‘A’ team line up against the British & Irish Lions at Cape Town Stadium on Wednesday.

Springbok assistant coach Mzwandile Stick and Lukhanyo Am, who will captain South Africa ‘A’ against the British & Irish Lions at Cape Town Stadium on Wednesday night, said there were several factors motivating the team as the Castle Lager Lions Series Tests move into view.

We look back at some of the best tries from the British & Irish Lions tours to South Africa in 1997 and 2009.

All eyes will be on the Carling Currie Cup First Division this weekend where the Leopards, Boland Kavaliers and Valke will try to close the gap on the Down Touch Griffons at the top of the standings.

DHL Western Province will have their minds set firmly on defending their title when they take the field against the Border Ladies in the Women’s Premier Division final in Cape Town.

SA Rugby has launched a unique fan campaign that will rally the green and gold army behind the Rugby World Champions with the introduction of #SpringbokSaturday.

Stormers name side to face Lions in Cape Town

Ernst van Rhyn will captain the DHL Stormers in their Castle Lager Lions Series encounter with the British & Irish Lions at Cape Town Stadium on Saturday.

Erasmus hopeful for another SA ‘A’ fixture

In an effort to boost the players’ match fitness and give them the best possible chance to push for places in the Springbok Test team, Rassie Erasmus was hoping that the South Africa ‘A’ side could play a second match on Saturday before the Test series against the British & Irish Lions kicks off next weekend.