FNB Varsity Cup: Tuks and UCT into the final

The Ikey Tigers outplayed the Eagles 54-36 after Tuks beat Maties 44-35. The two finalists will meet at the same Pretoria venue on Monday (19h00, SuperSport Rugby channel 211).

It will be a repeat of the 2011 final and while UCT will be looking to lift the FNB Varsity Cup for the third time, Tuks are chasing their fourth title.

It will be the teams' first meeting this season after their sixth round clash was cancelled earlier.

Tuks had a score to settle with their old foe, especially after losing out to them in the league stage.

Du Plessis broke the record for most points scored in a FNB Varsity Cup season when he surpassed former UCT flyhalf Demetri Catrakilis’ haul of 136 points from the 2012 season and will go into Monday’s final with his tally on 145.

Maties only had a solitary penalty goal via flyhalf Adriaan van der Bank for their first-half contribution to the scoreboard.

The second half proved to be a feast of points as Maties wing Munier Hartzenberg touched down for a converted try before Tuks struck back with a try to flanker Stephan Smit and Coetzee's second, which was recorded as a point-of-origin try.

Maties flanker Mitchell Carstens’ 77th-minute converted try reduced the deficit to nine points, but it was Tuks who celebrated winning a late breakdown penalty and the match. 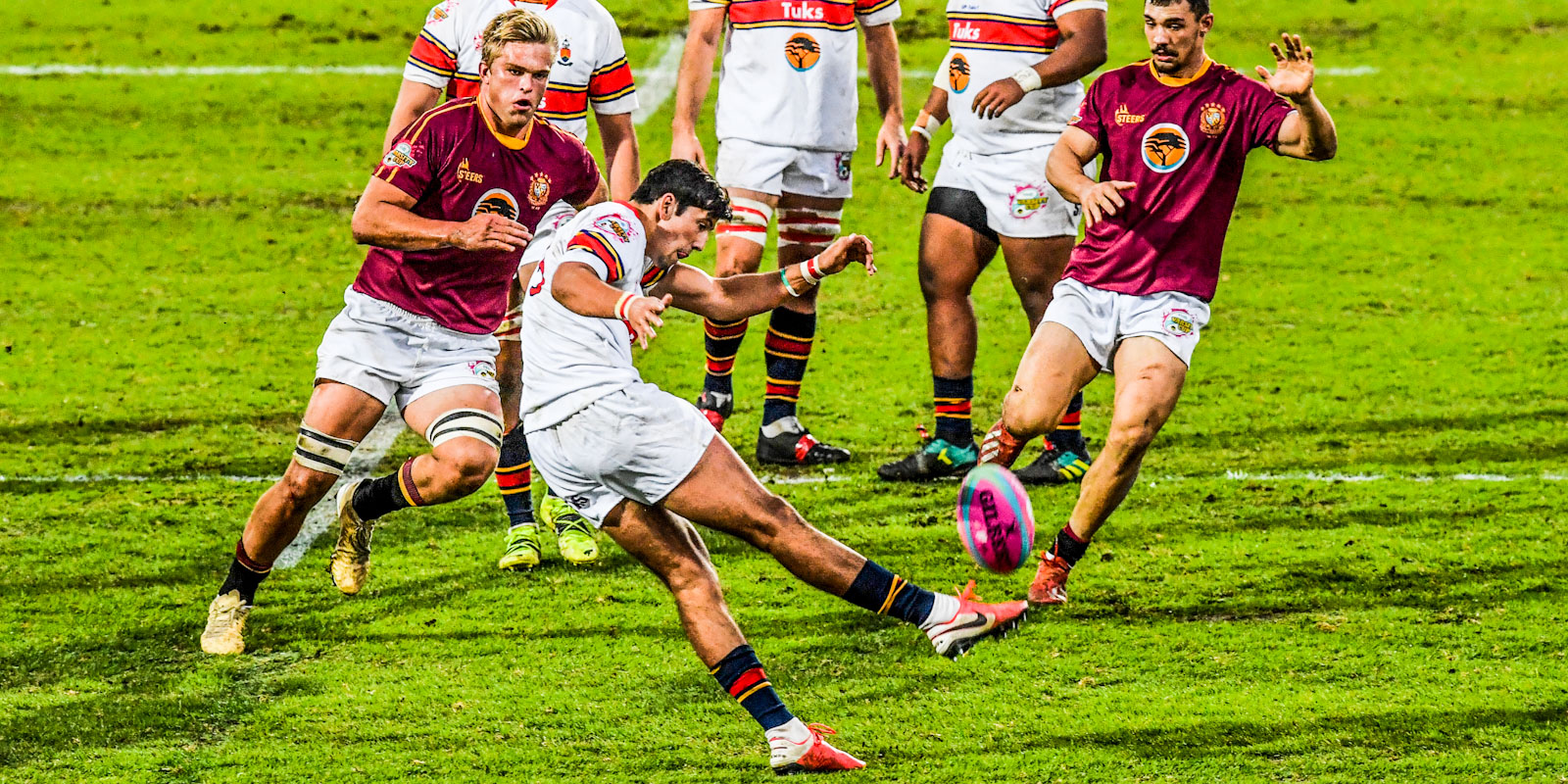 UCT fought back from 15-0 down to beat NWU and book their place in the final.

The Eagles came into this semi-final as underdogs having needed a final round win to finish fourth on the log, but made a superb start against the table-topping Ikeys, who had their top points' scorer James Tedder ruled out just before kick-off.

However, UCT soon rediscovered their form to take a 21-15 lead, and while the Eagles scored a try in first-half stoppage time to go back in front, they faded in the second half as a tough recent schedule took its toll.

NWU winger Keano Windvogel chased down a kick to score a point-of-origin try in the second minute of the match, with flyhalf Nivan Petersen kicking the conversion and adding two penalty goals.

UCT hit back with tries to lock Gary Porter, centre Le Roux Malan and No 8 Christian Stehlik, before NWU hooker Gustav du Rand mauled his way over for his ninth try of the tournament. Petersen's conversion gave the Eagles a 22-21 advantage at the break.

The Capetonians regained the lead when replacement hooker Josh van Vuuren scored off a driving maul early in the second half.

David Hayes’ up-and-under then resulted in the flyhalf scoring a point-of-origin try and when wing Rihaz Fredericks dived over in the right corner, the Ikey Tigers led 40-22 after 59 minutes.

Replacement Eagles prop Arno Gustafson forced his way over the whitewash, before Ikeys replacement scrumhalf Kyle Bowman scored at the other end.

Several massive clashes await in the Guinness PRO14 Rainbow Cup this weekend that will see teams edge closer to who will contest the final on 19 June against the South African winner.

DHL Stormers loose forward Johan du Toit, younger brother of Springbok star Pieter-Steph, has been named as captain of a strong Toyota Invitational side for the Toyota Challenge in Bloemfontein on Saturday afternoon.

Junior Springbok coach Bafana Nhleko on Friday named an exciting squad for the second leg of the SA Rugby Academy season, which features the U20 International Series, with Jordan Hendrikse (flyhalf) and George Cronje (No 8) among the headline players.

The moment Springbok supporters have been waiting more than 18 months for, will finally happen next Saturday, when a 45-man Bok squad for the Georgian Tests and the Castle Lager Lions Series is announced.

Treviso’s Stadio di Monigo will play host to the Guinness PRO14 Rainbow Cup ‘North v South’ Final on 19 June thanks to the support of the Federazione Italiana Rugby (FIR) and the Italian government.

Benetton stayed on course for what for them would be a dream home final in the Rainbow Cup against whoever wins the South African leg of the competition, with a hard fought but richly deserved win over Connacht.

PAS on board as Official Performance Nutrition Supplier

The University of Pretoria survived a second-half fightback from the University of Cape Town to claim a 34-27 victory in the FNB Varsity Cup final at Tuks Stadium in Pretoria on Monday night, securing their fourth title, having previously won the competition in 2012, 2013 and 2017.

Several massive clashes await in the Guinness PRO14 Rainbow Cup this weekend that will see teams edge closer to who will contest the final on 19 June against the South African winner.