Two out of two for Lions in warm-up series

The Lions continued their winning form in the 2021 Kick-off Pools as they defeated a determined Eastern Province outfit by 54-24 at the Nelson Mandela Bay Stadium in Gqeberha on Wednesday.

The Johannesburgers racked up eight tries – two of which were penalty tries – to four by Eastern Province, who found themselves in the challenging predicament of playing with 14 men from the second minute and 13 men for the last 28 minutes of the match.

Eastern Province lock Arnold Kleyn was shown a red card in the second minute for a dangerous tackle, and matters got worse midway through the third quarter after CJ Velleman (flank) was shown his second yellow card of the match, which saw him receiving his marching orders.

The teams took several minutes to find their rhythm with handling errors, ill-discipline and injuries testing them early on.

The Lions had the first say as they were awarded a penalty try in the 10th minute after Eastern Province were pinned for collapsing a maul, with the score being awarded minutes after the Johannesburgers’ lost Dillon Smit (scrumhalf) to a yellow card after stamping on an opposition player’s hand in a ruck.

The first penalty try came at a further cost for the home side as Velleman received a yellow card, which reduced them to 13 men.

The hosts hit back with a smart try by Christopher Hollis (wing), who took a quick lineout and dashed down the line as he caught the Lions defence off-guard, and the successful conversion leveled the scores.

The visitors found their form soon after with Dameon Venter (hooker) scoring a try from a powerful rolling maul in the 22nd minute to double their score, but this was short-lived as the Elephants’ Zingisa April (No 8) touched down after receiving the ball out wide from a ruck. 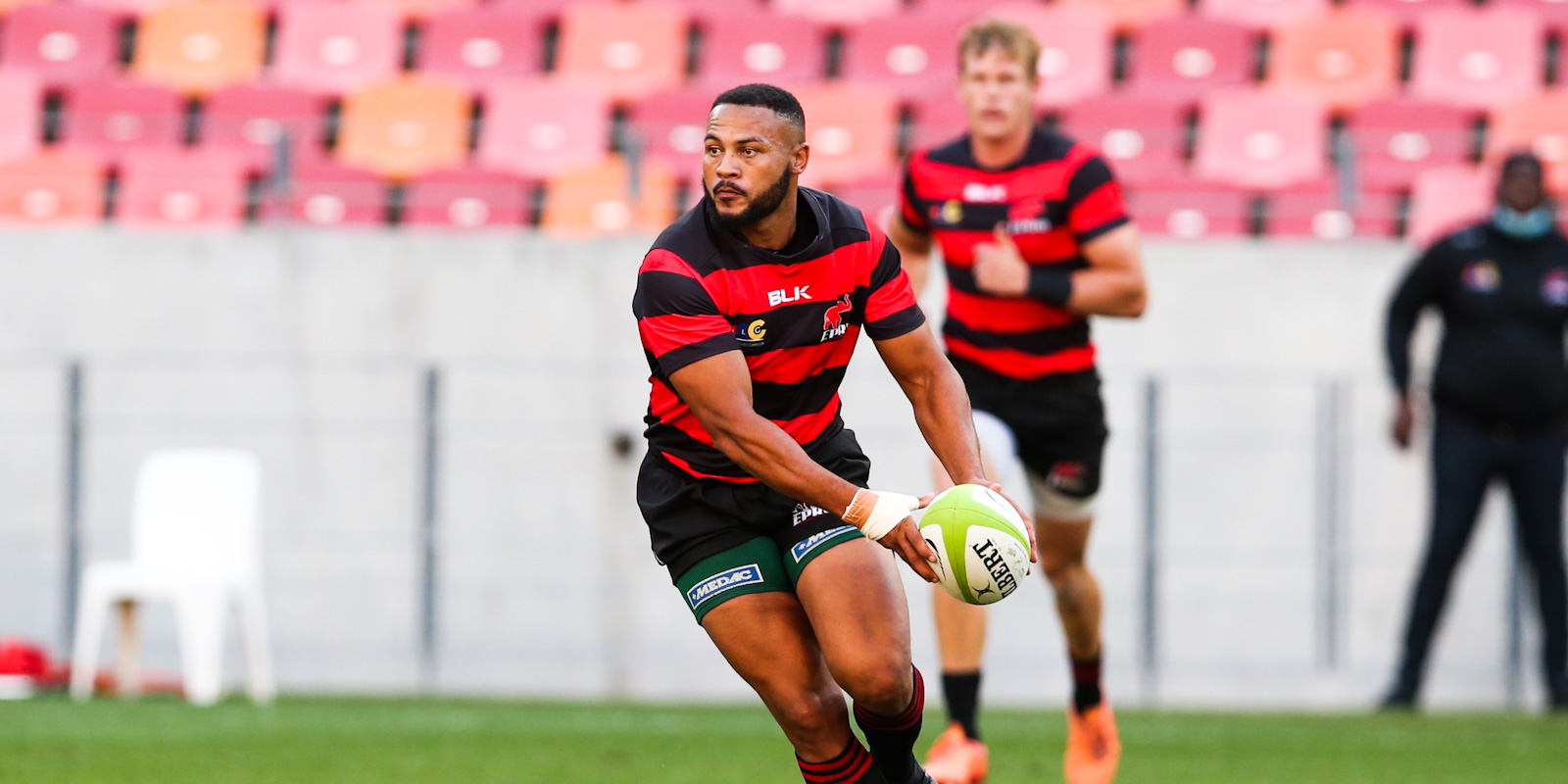 Sherwin Slater of the EP Elephants on attack

The Lions, however, added another try eight minutes before the break after replacement back Luke Rossouw showed his skill by breaking through two tackles to dive over. This handed them a 21-12 lead going into the break.

The Gauteng outfit built on their lead three minutes after play resumed with former Junior Springbok prop Nathan McBeth crashing over from a rolling maul to extend their lead.

Eastern Province were dealt a heavy blow several minutes later as Velleman received his second yellow card of the match following a series of penalties conceded close to the tryline, and this offence left the team with the trying task of having to play with 13 men for the last 28 minutes.

The Lions were awarded their second penalty try soon after, which pushed their lead to 11 points, but they were soon reduced to 14 men after Mark Snyman (flanker) received a yellow card following repeated infringements by the team following a determined fightback by Eastern Province.

The home team’s determined efforts finally paid off in the final quarter as Robin Stevens (replacement hooker) snatched the ball out of the air to score, with his captain Courtney Winnaar following minutes later, which saw them trail 33-24 with six minutes to play.

The Lions, however, wrapped up the victory with a flourish, touching down three times in the last five minutes as former SA U20 flanker Sibusiso Sangweni, Banele Mthenjane (prop) and Ngia Selengbe (wing) all crossed the chalk, which sealed a rewarding 54-24 victory.

Certain things were predictably good about the Springbok Sevens and their HSBC World Rugby Sevens Series in recent years...

Catch the action from the sixth round of the Women's Premier Division live here - matches are scheduled for Friday and S...

Delight for dynamic midfielders who dared to dream...

SA Rugby and associate sponsor Betway have taken a step towards the development of women’s rugby, following the launch o...

With three rounds remaining and the top two positions on the Carling Currie Cup log a two-horse race between the Vodacom...

Experienced playmaker Courtney Winnaar will lead Eastern Province on Wednesday when they take on the Lions in the Nelson Mandala Bay Stadium.

Springbok Women’s captain Nolusindiso Booi said her team have shifted their mind-set from disappointment to drawing the positives from the hand they have been dealt following World Rugby’s confirmation on Tuesday that the Rugby World Cup has been postponed to 2022.

DHL Stormers hang on for the win in Kimberley

The DHL Stormers’ set-piece play and broken-field attack were too good in a hot and windy Kimberley as they beat Tafel Lager Griquas by 38-32 in a 2021 Kick-Off Pools match on Tuesday afternoon.

Vodacom Bulls hunt down New Nation Pumas in the Lowveld

The Vodacom Bulls proved too strong and disciplined for the New Nation Pumas in the Mbombela Stadium, romping home 48-31 in an entertaining 2021 Kick-Off Pools match in Nelspruit on Tuesday evening.

Vodacom Bulls Director of Rugby, Jake White, has opted for continuity in selection of the starting line-up when the Vodacom Bulls travel to Nelspruit to square off against the New Nation Pumas in their 2021 Kick-Off Pools clash on Tuesday.

World Rugby confirmed on Thursday that it has appointed Megapro as its exclusive sponsorship sales agency for Rugby World Cup Sevens 2022 in South Africa.

With the two Guinness PRO14 finalists already confirmed, the attention will switch to Champions Cup qualification with a host of games set to determine the entries into next season’s European competitions.

Vermeulen has come a long way in SA rugby

When Duane Vermeulen lifted the Carling Currie Cup in the colours of the Vodacom Bulls on 30 January, he achieved a very rare feat, which was amplified a few weeks later when he was named SA Rugby Player of the Year for 2020 – the second time in his career after also winning it in 2014.

Experienced playmaker Courtney Winnaar will lead Eastern Province on Wednesday when they take on the Lions in the Nelson Mandala Bay Stadium.