Swanepoel missed only one of his nine kicks at goal, contributing 22 points, while the visitors’ kickers failed with half their attempts at posts, which ended up costing them victory.

The Lowvelders outscored the home team by three tries to two, but their discipline let them down in the second half, which allowed Swanepoel to keep the score board ticking over.

Despite the wet conditions, which made handling difficult, the New Nation Pumas were full of enterprise in the first half and showed a keenness to throw the ball around, but they had to settle for a half-time score of 13-13.

Built on the back of a dominant scrum, the Lowvelders had more possession and territory, used clever tactical kicks and were not shy to spread the ball wide, but their efforts were often thwarted by solid Lions defence. 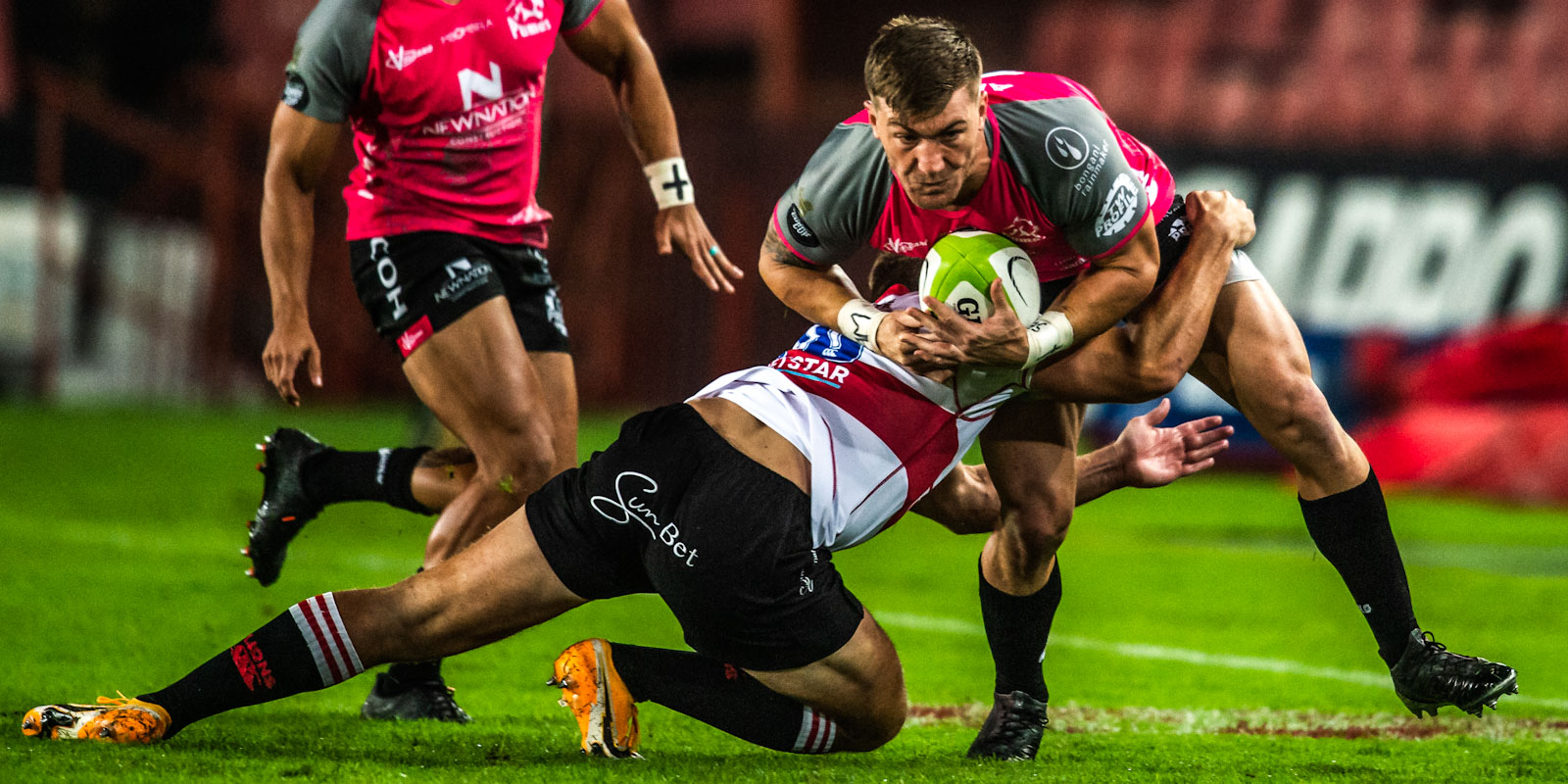 Etienne Taljaard is stopped in his tracks

Simon Westraadt (hooker) scored an early maul-try and Eddie Fouche (flyhalf) kicked two penalty goals and a conversion, but the New Nation Pumas had a few more opportunities to score which they didn’t convert.

As a result, the scores were level at the break after Lions scrumhalf Morne van den Berg scored a breakaway try from an error by the visitors, almost against the run of play, two minutes before half-time.

The Lions had the early momentum after the break, with Swanepoel’s boot putting them in the lead, but the visitors refused to give up and tries by AJ le Roux (replacement hooker) – again from a rolling maul – and Ali Mgijima (replacement centre) midway through the second half put the New Nation Pumas back in the lead.

The final 12 minutes belonged to the home team though, as MJ Pelser (replacement flanker) scored their second try from a strong scrum 5m out, while Swanepoel added a few more points from the boot to secure the home team victory by four points.

New recruits Schalk Ferreira (prop) and Rynier Bernardo (lock) were both included in the Toyota Cheetahs' starting line-up for their 2021 Kick-Off Pools match against the DHL Stormers at Cape Town Stadium on Saturday afternoon, while experienced Springbok scrumhalf Ruan Pienaar is set to return to action off the bench.

Fouche back at flyhalf for New Nation Pumas

Eddie Fouche has fully recovered from his injuries and was drafted into the New Nation Pumas’ starting team for their season opener against the Lions in Johannesburg on Friday evening.

Springbok Women’s coach Stanley Raubenheimer expressed his satisfaction with the strides being made by his charges at their training camp in Stellenbosch as the countdown continues to the Rugby World Cup in New Zealand in September.

Former Vodacom Bulls age-group players Christopher Hollis (centre) and Luigy van Jaarsveld (No 8) will return to their old stomping ground when Eastern Province travel to Pretoria for their season opener at Loftus Versfeld on Sunday.

The Vodacom Bulls scored 12 tries to one as they comprehensively outplayed Eastern Province by 87-10 in their 2021 Kick-Off Pools match at Loftus Versfeld on Sunday afternoon.

The Cell C Sharks scored four unanswered tries in the second half of their 2021 Kick-Off Pools match against Tafel Lager Griquas to open their new season with a commanding 35-10 win in Durban on Sunday.

SA Rugby announced on Monday that coaches, parents and players from schools across the country will be invited to a series of webinars as preparations step up a gear for a return to action later in the year.